A while back I experimented a bit with patching-up the case of the Noiseless. The 'leatherette' covering had come undone in a few spots and it looked worn and grey.

The first step was (naturally) cleaning with a wet cloth (water with a little dishwashing liquid). After fixing the covering back in place, I wanted to see if I could make it look a bit less tired. It isn't leather, but it did look very dried-out so I thought I'd experiment with some polish. The 'waxing' might be good to make the covering a bit less brittle and using black polish might make it look less grey.

First experimented with the back, when that looked fine and did not crumble I did the whole case. When also after a couple of weeks the case still looked fine with no obvious ill effects from it's treatment, I dared to also tackle the case of the Victor. That case was now looking very 'tired' compared to the Noiseless'. 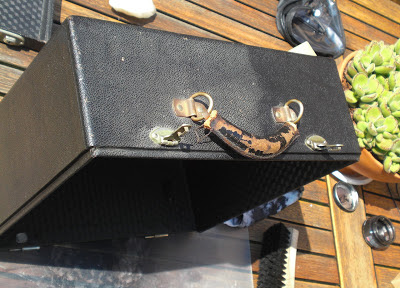 Also on this one I applied regular black shoe/leather polish in the normal way, i.e. applied with a cloth lightly rubbing it in and over the surface. Then vigorously polishing with a soft (black) brush gets the wax into the valleys of the texture and spreads it out evenly. That really makes a difference; instead of having a worn, old case in the house it now looks smart and quite presentable (and acceptable!) again.

The one item that still stands out is the handle. Looks like this was made from papier-mâché (?) over a thin metal core. The outer fake-leather layer has mostly come off, leaving an uneven, worn surface. No idea yet on how to tackle that one. Any suggestions on that are most welcome; curious if anybody has managed to revive/repair/replace these worn handles.

At any rate, the clean black case now matches the shiny black machine inside it a bit better :)
Posted by RobertG at 1:37 PM