It is a black leatherette (rexine) case, but not a typewriter. It is analog equipment, arguably more analog than a typewriter even.

Here some quick pictures of the new purchase: 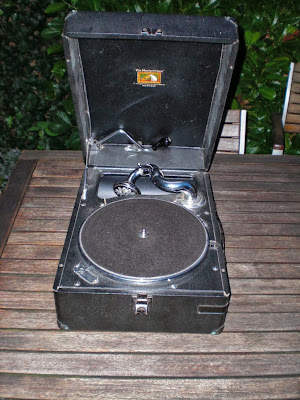 When taking off the turntable - not clean: 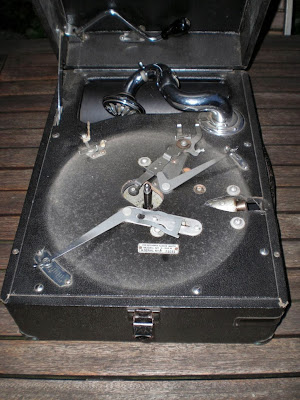 The light in the pictures is already low (was late); given the the somewhat dusty and grimy state of the machine that is not a bad thing perhaps. On the plus side the machine is complete and the chrome plating seems fine.

It's a very late HMV model 102 gramophone, the date code on the typeplate shows this was made in 1953. This is not a type of machine I'd associate with the fifties, but in Britain these were still being made and sold alongside electric pick-up models. The 102 model was introduced in 1931 by HMV and made right up to 1960 with only minor changes, making it indeed more a thirties machine than a fifties product. This is a late evolution of the type with the flush deck and a 5B soundbox, this H model was introduced in March 1953.

Similar to typewriters there is a lot of online activity on gramophones. Whilst not with the sophistication and completeness of a typewriterdatabase, the various forums (forii?) and websites quickly gave the information needed to identify and date the machine.

A very helpful thread on The Talking Machine Forum and very informative posting on how to take it apart by an HMV102 owner in Singapore gave me the confidence to go ahead and buy this one and now dive in to fix it. (The autobrake doesn't work and the speed is very sensitive; race or stop and no middle ground.)

The empty wooden box with the motor board with mechanism taken out. 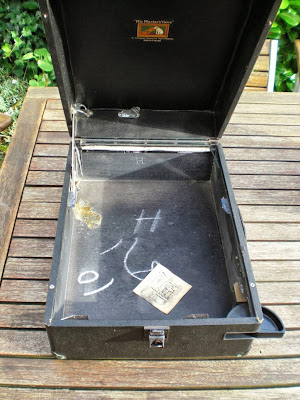 The chalk markings and the stamp make it clear this is an H model (if the typeplate itself was not convincing enough). 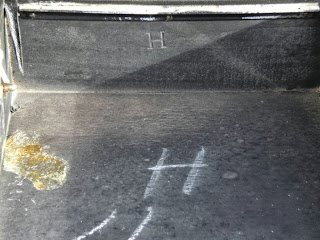