Now that I'd got the gramophone pretty much working, I set out to get some period records to go with it. With one set that I bought came a small record carrying case for 10" records.

Like many cases of the 30-ies it is made of thick cardboard covered with 'rexine' or 'leatherette'. The fittings look quite good in the picture, but in reality are rather corroded. The picture above shows the little case after receiving a first 'typewriter case treatment'. Useful skills are gotten from tinkering with typewriters, these can be applied across categories :)

Many such cases I guess were sold for storing your records. This one was however sold as packaging of a language course. The Linguaphone company sold record-based language courses in such carrying cases - in this case an English course in two cases even (that is a lot of records!). The language course records of this one were probably lost and destroyed decades ago - these sets do regularly show up on the local auction site complete though. Not rare at all. (The Linguaphone company also sold their own brand of gramophone - advertised as ideal for clear reproduction of the spoken word as well as for music. Company still extant actually.)

The new blank index sheet tries to stay with the style of the original, using the little stars as random decoration and of course using a Gill Sans typeface. So now a re-purposed carrying case for some of the new 10" records: 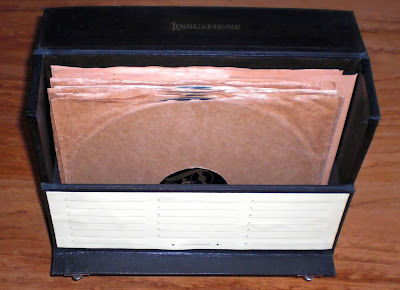 (After taking the picture I spotted the glue had let go in some spots, since fixed.)