This beautiful desk for a dollar

From Popular Aviation, December 1939 this advertisement by Remington: 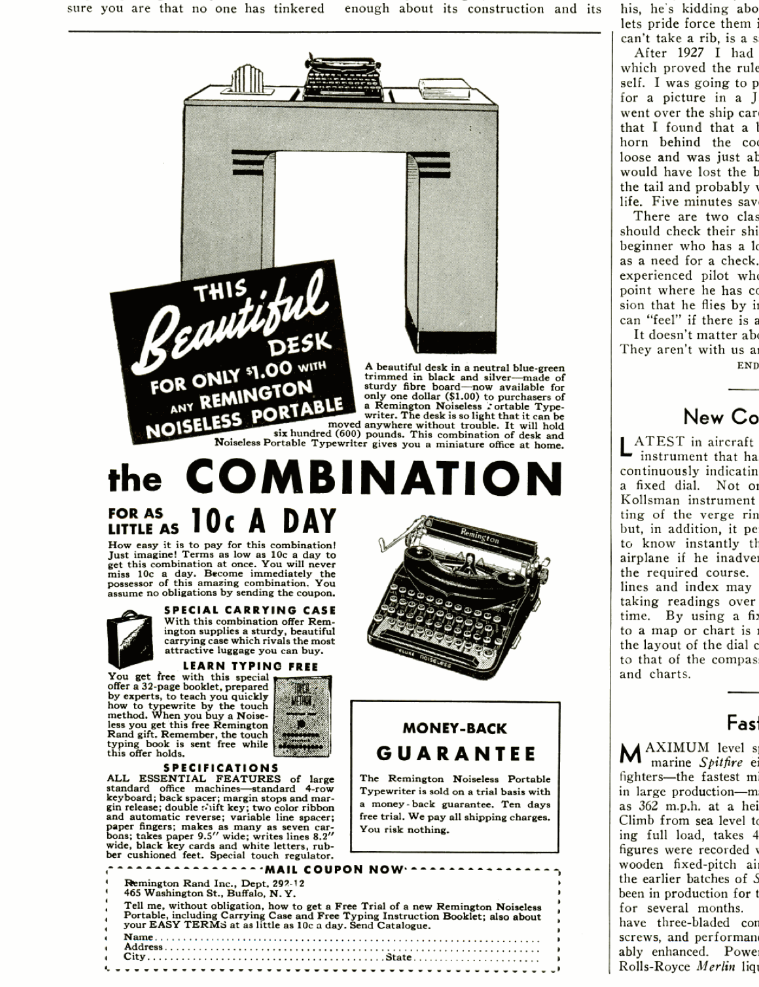 Around that time, this beautiful desk is advertised quite a lot in several magazines.

Seems a bit off, to sell a desk for such a relatively low sum as an incentive to sign up for the monthly payments for the typewriter that would total to a much more substantial sum than a dollar. Offering the free booklet is one thing, but to list the carrying case as a special bonus of this combination offer is a bit rich. Overall the commercial strategy of Remington here in this ad shows perhaps some similarity to today's shopping channels' methods.

Having said all that, a desk is a desk. For only one dollar. Made from fibre board (sturdy though) in a neutral blue-green and finished with black and silver. In a very modern, up-to-date design too. The illustration is suggestive the desk could be shipped as a flat pack for home assembly. (Ahead of their day, they could've made a business out of this type of furniture.)

Of the typewriter plenty have survived to this day. Likewise for their cases and there are even copies of the booklet floating around still.

Did any of these desks survive?

Given how widely these were advertised, I suspect that Remington did at least sell some of them. On the net there are loads of images of the Noiseless, of its case and even of the booklet. There are of course some images of older Remington desks (purpose built typewriter desks, decades earlier), but none of this beautiful desk for a dollar.

Now I do wonder, are there any photographs or surviving examples?
Posted by RobertG at 10:32 AM