With the #2 Portable on the shelf, am back to the current hobby restoration project that is proving an exercise in new techniques (for me). Re-covering a wooden case in leathercloth, for one.

Like the carrying cases for older typewriters, portable gramophone cases of the twenties and thirties are generally made of wood and covered in a leathercloth. This covering goes by various names, I've heard 'Leatherette' a lot as well as 'Rexine'; both I think the trade-names of manufacturers of such cloth. Usually made of a fabric backing with a (nitrocellulose?) covering in a pressed pattern. Modern variants also made with PU or PVC even.

This current restoration project turned out to be in a worse condition than first expected. The leathercloth often can be revived with leathercare products, but in this case the structure had become brittle and hard. Probably it was lacquered at some time to 'freeze' water damage, unfortunately it looks like the lacquer chemically attacked the Rexine. 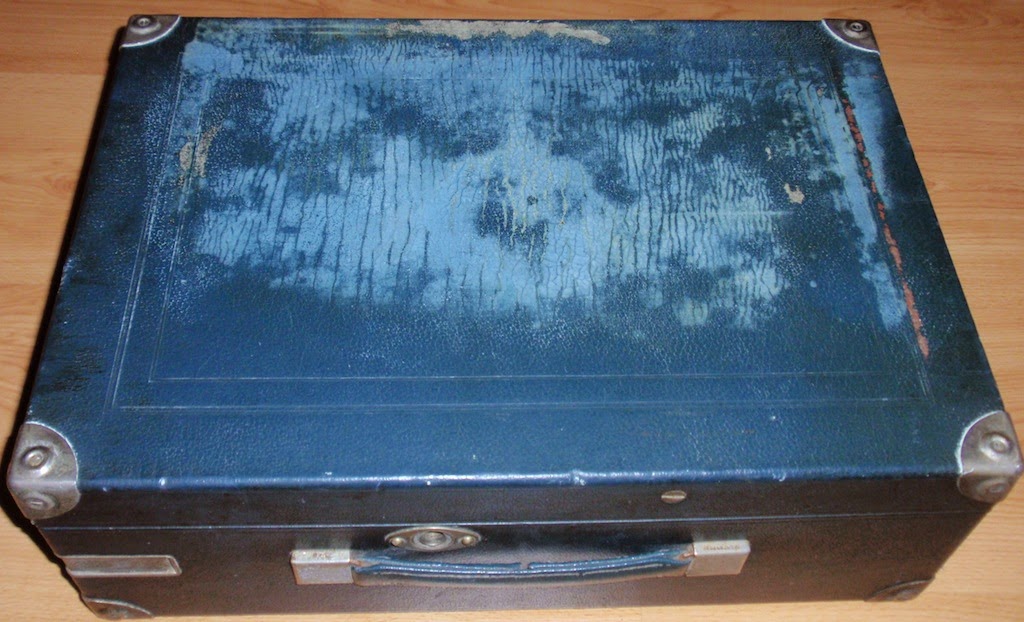 No amount of polishing would recover this. So the whole machine was taken apart for the case to be stripped for re-covering in a new leathercloth. It really helped to read about somebody else re-covering a case on his blog/site (thank you very much!). Got some good pointers and advice there, made it seem achievable. 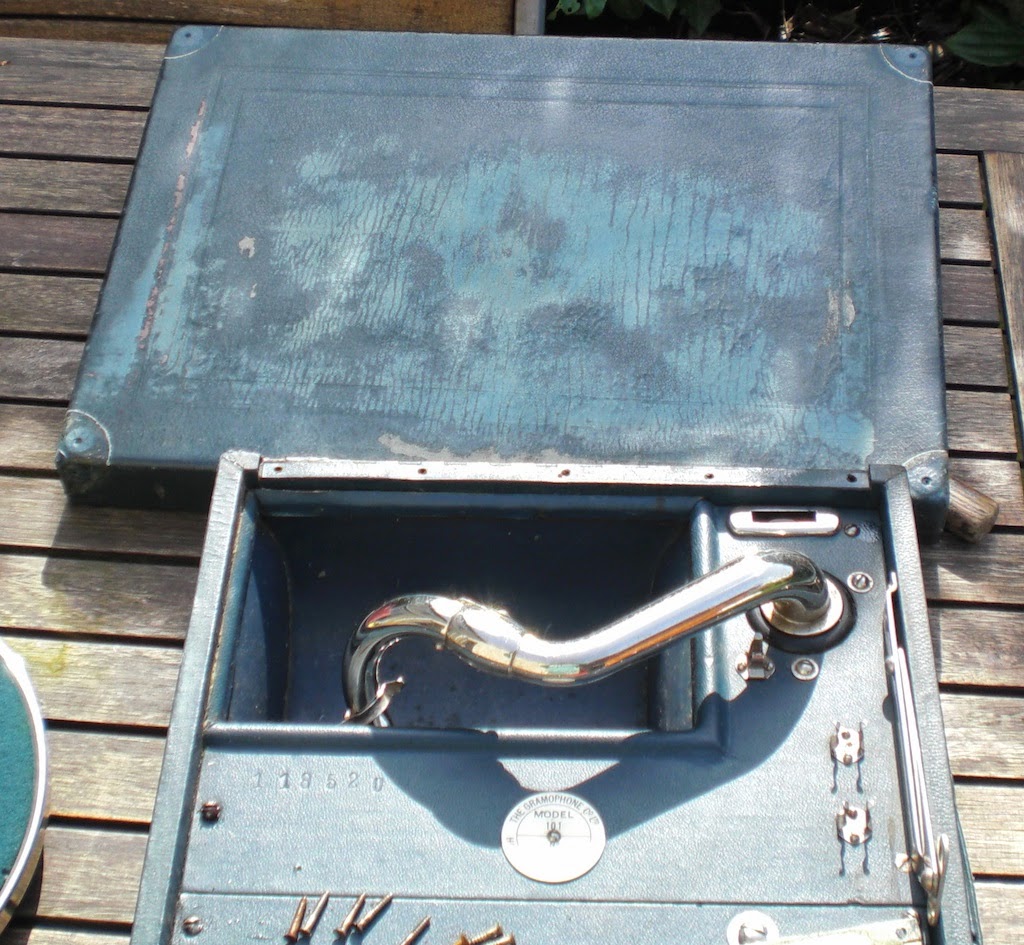 Before ripping off the old covering however, new leathercloth needed to be found to re-cover the case.

This machine's case was covered using blue Rexine (being a British made machine) and quite amazingly this is still available. The original manufacturer that supplied this in the 1920-ies went out of business in 2005, but the product is still being made and sold by Ratchfords in the UK. They are quite happy to sell a meter and ship it out, the blue however was not in stock (and making 500 meters to special order really would have been too much). 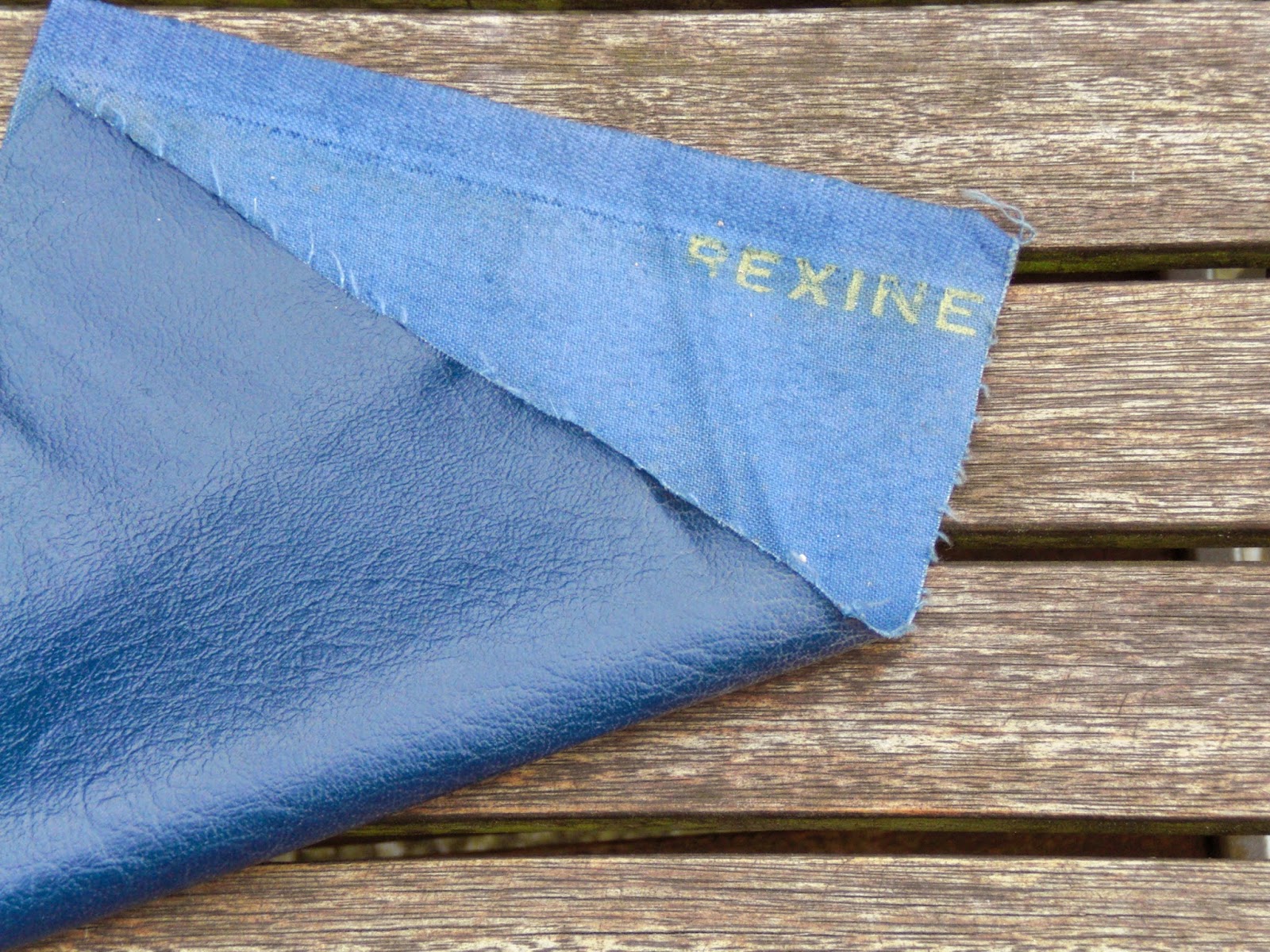 The local bookbinder however stocks lots of book covering materials and amazingly even had a roll of genuine Rexine in a suitable shade of blue. So even though this is just a shade deeper blue than the original, it is genuine Rexine for re-covering the case. (For typewriter cases, a length of more common black leathercloth should be easier to find.)

Didn't take pictures of the basic wooden box (and the storage box with all the loose parts), but it is a plain wooden box with softboard ('essex board') top and bottom. The old covering came off without too much effort, the old glue having become brittle and hard. With a light sanding and smoothing, the case is ready for re-covering.

Using the old leathercloth patches as template, new sheets of Rexine were cut slightly oversize. Used wood glue (PVA) diluted with a bit of water and a drop of washing-up liquid and applied with a paintbrush on the case. Dilute only lightly, make it a bit runny but definitely more like glue than water.

The case originally had lining and panels, pressed into the leathercloth. To make lining (the Remington #2 case also has such lining I noticed), made shallow grooves with a file along a steel ruler in the surface. When applying the new Rexine and pressing it down, pressing the cloth into the groove will make a neat line. (Using a screwdriver tip or fingernail, the Rexine seems to soften from the glue and is 'malleable'.)

In the same way the thick lines of the top panels were scribed into the softboard and the leathercloth pressed / scored into the pattern. The thin lines just scored along a steel ruler. As the glue (and cloth) hardens the lining is firmly in the material. 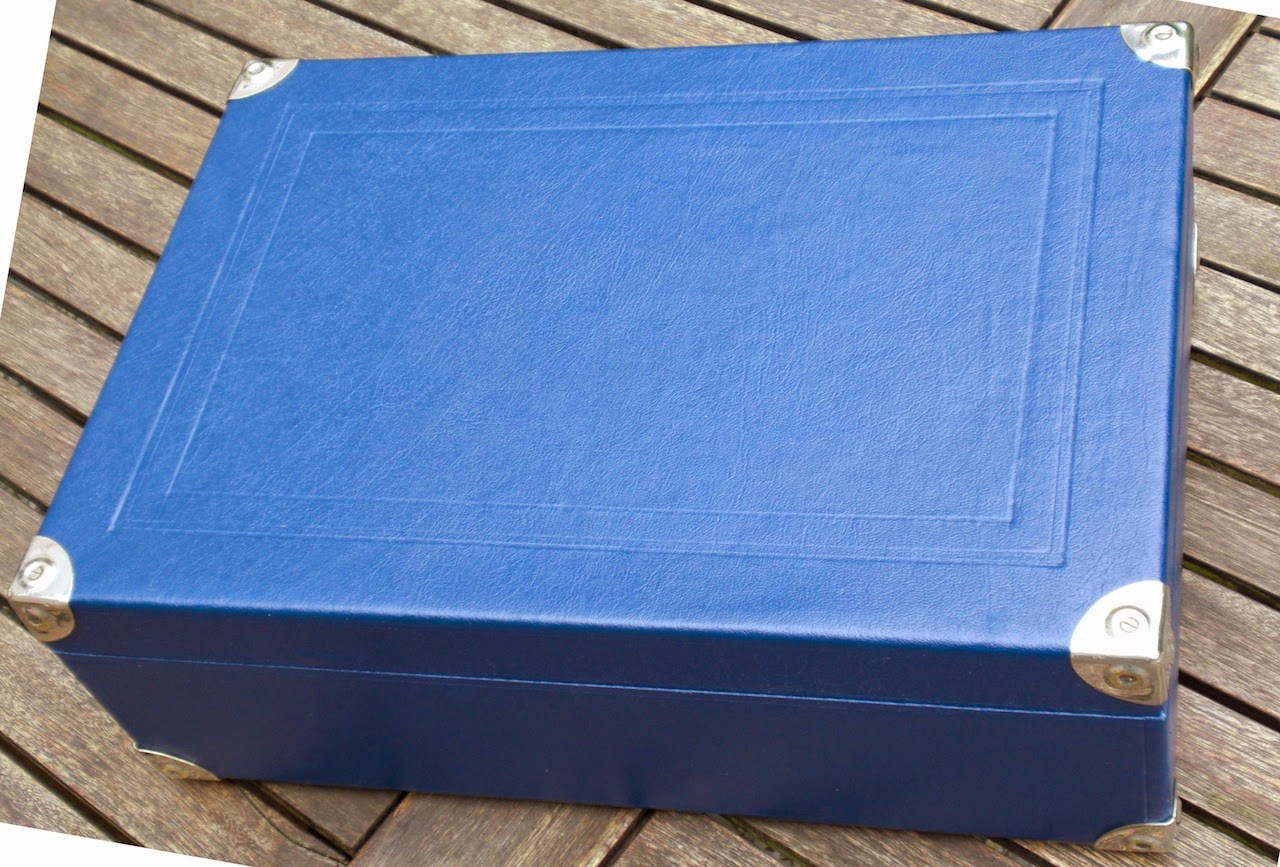 One learning was that the corner pieces should have been fitted right after glueing the leathercloth on. With the Rexine still a bit soft, they would have been seated firmly into the case with a better fit. Another learning was to not dilute the glue too much. And keep pressing it down to prevent lifting in spots.

Re-covering a tatty typewriter case should also be very manageable, complicating factor however is that most cases have the fittings riveted on instead of using screws.

(This project by the way is rebuilding a 1928 / 1929 deluxe version of a His Master's Voice model 101 portable gramophone in blue with nickel-plated fittings.)
Posted by RobertG at 2:14 AM