When using older machines, you form an opinion on how they perform. (And judging from this post over at The Typewriter Revolution, opinions are indeed formed :-)  All types indeed must have their strengths, weaknesses and idiosyncrasies.

With older machines however, how that one specimen performs is only partly due to its construction and design. To probably a much larger part it is the consequence of the way the design and the specific machine has aged, the use and abuse it got and the various storage conditions.

It is when having more than one of a particular machine that have aged very differently that this becomes possible to see and experience. The two Remington Portable #2 typewriters I now have were produced within 6 months of each other. It seems logical that when new, these performed generally identical. In practice however, these two felt very different to type on. Actually very lucky that these two had very diverging properties when used. Where the one machine had a very heavy carriage return, the other was featherlight. Where one machine had a very heavy touch (more than 100 gram), the other was light (~70 gram) and snappy. Et cetera... 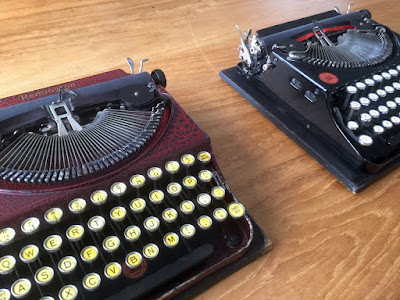 It is the one machine showing how the design can perform on one aspect, that then triggers the search for improvements to make sure the other also reaches that level of performance.

For example the linefeed; on the black machine this was a bit stiff - on the red machine light. Without the red machine, would probably have put the linefeed with the short lever down to a design property - Remington Portable #2 machines have a bit a too short linefeed lever for comfort.

The red machine working like a charm however prompted a closer look at the linefeed mechanism of the black machine.

Took a while for the penny to drop, but then realized that the small roller that holds the ratchet on a line position was not rolling on this machine. It was dragging over the ratchet, pressed down into the position by the spring against the friction over the teeth. 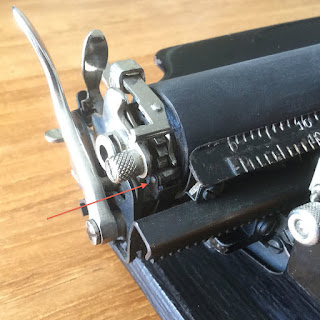 After a very small drop of oil and some nudging of that little roller, it started to roll freely again. So no longer does the linefeed lever have to drag (friction) the roller over the ratchet, but it rolls over the teeth with only the spring force needing to be overcome. This also makes the linefeed more reliable and regular, as the spring no longer has to overcome friction in pressing the roller down into the line position.

Unlikely to need this, but for tweaking a bit further the risk can be taken to loosen the (left) mounting screw of the spring holding the roller a little. When keeping enough tension on the spring the screws still stay firm, otherwise a small washer or shim behind the spring can be good to use. 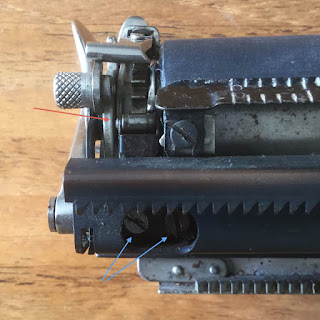 The difference made by the simple making-free of the roller was surprising. Now also the black machine is very easy to work with, the carriage return and the linefeed can easily be operated with a finger (the pinkie even, if so desired :).

Without the example of how it could perform, would probably not have found this simple issue.

Now wondering; what little issues are hiding in other, singleton machines?
Posted by RobertG at 12:46 PM