When first introduced, the strips and plates of Meccano were nickel plated. This gives the small mechanical models a fairly neutral and technical appearance - albeit a bit boring perhaps. 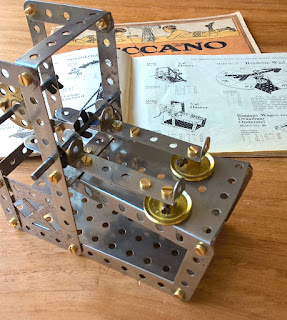 Starting first with a bright pea-green lacquer on some parts in '26, from 1927 on then all strips and plates are a technical dark green and red. This coloured 'New Meccano' fits well with machinery colours of the time and gives the small models nonetheless a livelier appearance. These are toys after all. (Freelance monoplane in period parts by 8yr old.) 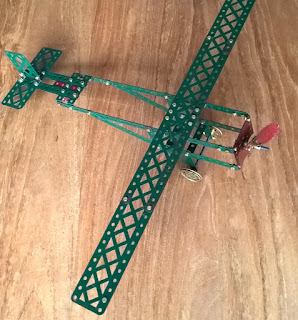 Then without any advance warning a new colour scheme is announced in a black and white advert in the Meccano magazine of November 1934. This proudly announces new blue and gold parts! To illustrate what the monochrome print cannot convey, some newly re-painted example parts alongside the magazine. 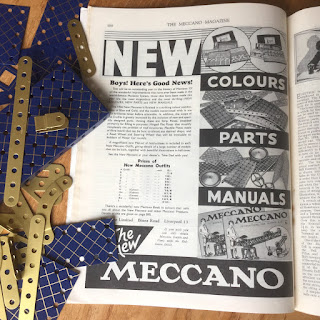 In the following December 1934 issue an article then shows some of the newly introduced parts and how these can be used. 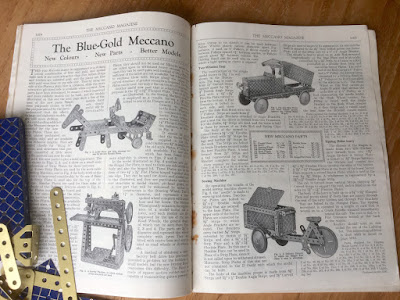 The plates do overcome an issue with the Meccano system by then that all models are 'wireframe' and are becoming a bit antiquated. Also a completely new range of lettered sets is introduced that is different from the previous numbered range. A whole slew of complex upgrade sets is carried to bridge every possible gap between the old and new ranges.

They were indeed right - the models really are in eye-popping colour. Comparing the old dark green and red with the new colour, the system made a clear step towards being the toy that it really was and moving on from the origins of also being a system of mechanical demonstration. (Both are examples of 'most useless machines' created by the children.)

Having re-painted a small batch of parts in the blue and gold colour-scheme, these proved the most popular with the intended age-group today. At least a first seeing them, the parts 'wow' with their colour. There was a bit of a mixed reception at the time as I've read, with comments that it was not quite 'boys stuff'. Even so, am suspecting it could have been similar back then - if they ever did do some 'consumer testing' with the intended age group, the colours probably 'wow'-ed them too back then :-)