When watching the movie "Kiss and Make-Up", the secretary in the very swanky beautician's office uses a typewriter that seems to match the overall decor. The machine is light in colour, definitely not black. 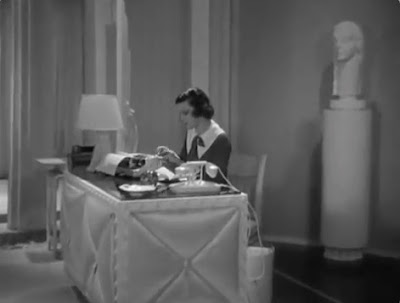 A few moments later, the typewriter is shown better. As Annie looks up, the machine fairly gleams - this is a metallic shine and not a coloured lacquer. The top-cover and the panel in the sides also clearly confirm this to be a Corona typewriter, a so-called 'flat-top' model. 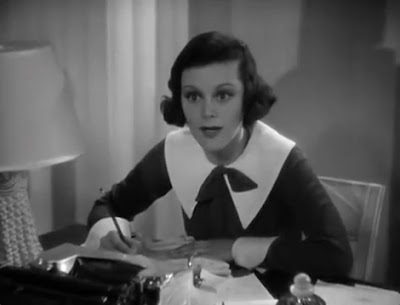 As is written on e.g. the Corona page at Machines of Loving Grace, in 1934 a small series of actual sterling silver typewriters were made to promote the updated 'Sterling' model. Seeing this machine shine, it seems likely that this is one of those limited-edition typewriters with a housing of actual silver.

A shiny silver typewriter fits right in the general decor, so it may have been chosen by the studio - it may also have been a promotional  'product placement' by Smith-Corona. When the film was made, these silver promotional models would have been brand-new, just about to appear in showcases in a select few shops. 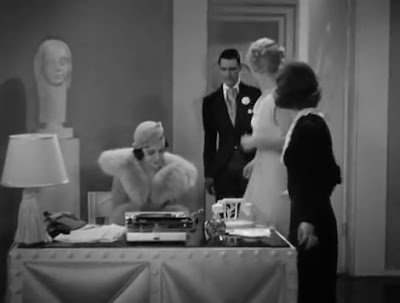 However the brand name is nowhere shown, even in this view of the back of the machine any lettering seems to have been removed. So it is perhaps more likely to have been the studio's choice. (Not sure about the silver Corona's, but regular machines have the name printed on that back panel.  Have never myself seen an actual silver typewriter; these were rare then and are even rarer now.)

The movie itself is of course a bit dated and very much a 'pre-code' production. Light comedy and visual escapism that is lightyears removed from actual reality - let's just say that the film was not made for its storyline.

It has an 'extravagant' cast to match the film's theme, with Cary Grant as the male lead. And they used an extravagant typewriter prop too.

In any case, a pretty rare machine to spot!
(Picture of an actual existing sterling silver typewriter here.)