Another Safari, back case spotted!

A casual browsing of the local thrift-stores over the past week turned up a few typewriters this time. Often there aren't any typewriters, but this time a first two were set out on a table. Modern, beige machines with a plasticky look.

An Erika and a Triumph. Both probably still there on the table. (Though there's a trader near here that seems to positively hoard these machines to then put them on the classifieds-site at prices that I think are perhaps 'optimistic'. Anyhow, these machines may well turn up online shortly as well.)

A next shop had a single black leatherette case on a table! First vintage machine in ages. 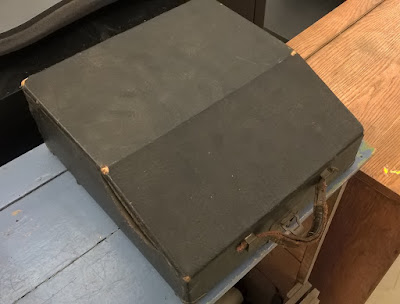 Viewed from a distance - that looked like a pre-war Remington Portable typewriter case. 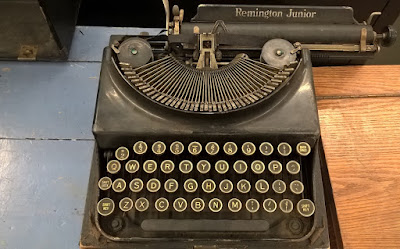 And indeed it was - containing a Remington Junior from the mid-thirties in 'attic-condition'. Case was dusty, but quite solid still. The typewriter itself a light dusting and rusting all-over.

Made in the U.S.A, exported with a Dutch/International keyboard and now after 80-odd years sitting in a second-hand store.

A budget-machine, basically a Remington Portable #3 with various extra conveniences left off. Not sure how much Remington left off, it may also be that this machine's had parts removed over its past ~85 years. For example; the carriage does have the mountings, but no line-spacing selector poppet. 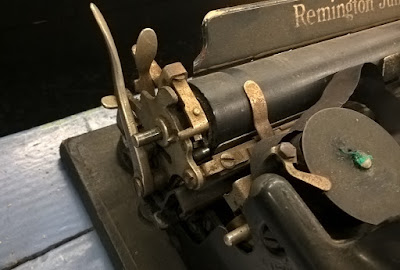 Also visible in the picture is the rust on all the nickelled parts. A damp attic, then.

Despite the very reasonable asking price (fifteen), left it there as a project for somebody else. Very neat machines though, these Remington Portables  :)
Posted by RobertG at 9:43 AM