Case of the Underwood 5 - cosmetic touch-ups

Following the structural repair, the case lid and base of the Underwood 5 typewriter have now also been 'touched-up' cosmetically. 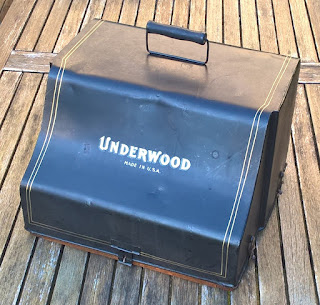 There are still spots and blemishes, but much cleaner and protected with a coat of varnish. Still not sure about that lining, it does look a bit 'wonky'. One side-panel's lining is skewed 'off' by a few degrees. The gold lining was however re-applied with precision, following exactly the visible marks of the original lining. 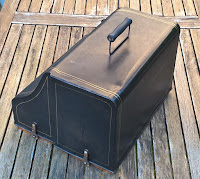 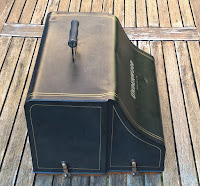 In touching-up the case lid, the first step was removing all the dried-out spider and fly droppings. With a small, sharp screwdriver these can be 'chiseled' off, most will disintegrate in a puff of dust. Several however had embedded themselves and attacked the underlying paint, leaving a bare metal spot.
All the bare spots and all the scruffs and scratch marks were then filled in with a matte black enamel paint, using a fine 'camel-hair' brush. To check colour-matching, the surface was wetted with a cloth - this evens out the surface finish and allows checking for colour only. When the light catches the surface, the touched-in spots can be clearly seen. 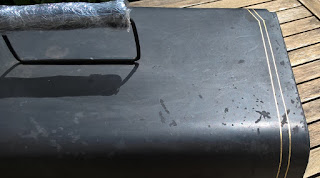 What can also be clearly seen is that the newly applied gold lining is not 'straight'.
This was a bit of a 'judgment call'; how to re-do the lining (or if to re-do it at all). An option was to create new lining according to the old pattern, but now accurately spaced out and straight. In the end I opted to re-do it by exactly tracing the original lines - these could still be seen as a shiny outline on the dulled paint.
That the original lining was so wobbly and in-accurate was surprising to me - on such an expensive article I would have expected more care and precision to have been applied. Even for hand-lining, this seems a bit 'slap-dash' - the spacing on the front-lower lines is remarkably uneven!

Having decided to do a restoration of the original appearance, a leather strap was positioned right up to an original line and then fixed in place with masking tape. Then the original line was re-traced with a gold pen with a steady, constant stroke-speed for an even thickness and intensity. (First several different gold pens and markers were tested on black card. The house-label of a local department store turned out to be the best. A proper 'brassy' golden colour (many pens are mostly yellow) and proper opaque, visible on black.)
After the lining was re-applied, the whole case was given a spray-coat of protective varnish. For this case, an acrylic artists-vanish was used - a quick-drying and non-yellowing varnish. The old, dull paint of the case seemed to 'suck in' the first coat. It very likely had become completely porous over the past century. With another few coats of the varnish, it now has a reasonably even, satin-gloss finish. Not the high-gloss it originally had, but it looks appropriate for the overall age and condition.
The clasps that hold the lid onto the studs of the base had rusted. Using a card to protect the finish around the clasp, these were cleaned-up and brightened with some steel-wool. A small drop of oil to make the slides go easier again.

The base-plate is assembled from three planks glued together. One side-plank had a small split at the end, so this was glued down again. Clamped with some thin plastic sheet to prevent accidentally gluing the clamping blocks to the base.

Bare spots on the wooden base were given some acrylic lacquer, rubbed in with a rag. This should fill the 'open' wood and not affect the overall original finish of the remaining lacquer.
The end result is then a stabilised and restored protective transport case for the Underwood 5 typewriter. It's cleaner and looking more like it originally did in 1920, yet it still does look its age.
Including the somewhat 'wonky' gold lining :-) 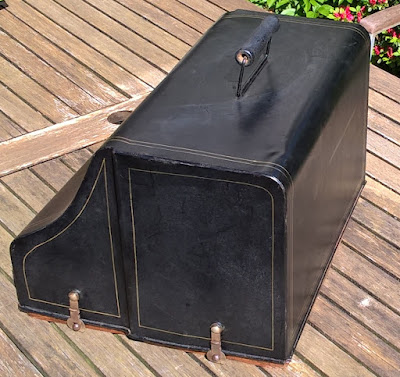