Browsing an older issue of 'Het Leven' ('Life') magazine of 1937, the following article caught my eye "A relief for speedy composers.": 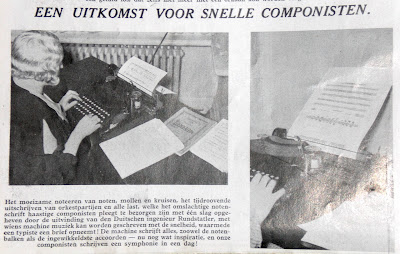 The caption (in Dutch) reads:
"The laborious writing down of musical notes, sharps and flats, the time consuming writing out of the different orchestral parts and all the burden that the complicated musical notation is for the speedy composer have been resolved in one fell swoop by German engineer Rundstatler, with his machine that can write musical score with the speed that a typist can take a letter! The machine writes everything, both the musical notes and the bars as well as even the most complicated chords - now just some inspiration, and our composers write a symphony in a day!"

One other mention of the Rundstatler machine turned up on a first quick internet-search. A scan of an advertisement for the machine (included in a thesis for it's graphic design). 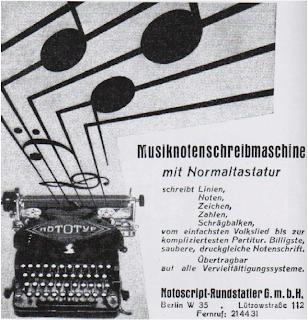 Looking at the machine in the photograph, it somewhat resembles perhaps an Adler mechanism. Still has at first glance a 'normal' 4-bank keyboard and the sheet clearly shows indeed musical notation. The print-ad suggests this was probably on the market and for sale; in this blog some recent (and much better) pictures of an actual Nototyp machine. 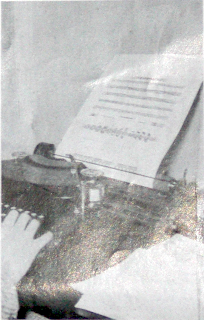 A second internet-search quickly yielded a patent for the machine and also showed that it (of course :-) was already the subject of an article on oz.typewriter. Including a much better quality version of the photograph above and much extra information on these machines.

But still enjoyable and inspiring to run across such little tidbits of ingenuity from decades ago.
Posted by RobertG at 3:54 AM