This is what I guess is called 'an impulse buy' from a trip to the town centre. A nice, full bottle of blue 'letter-writing ink' from Talens, here a well known maker of inks and paints. Talens is still making and selling supplies, but this is definitely not recent stock. 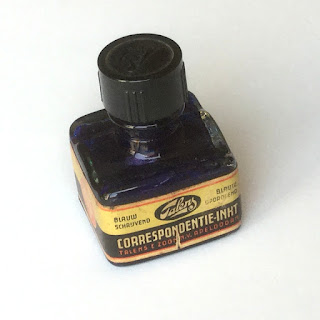 An extra label at the back explains this is 'temporary replacement quality', for the regular Apoldro variety. Especially notes that this ink is not everlasting, thus quite suitable for normal correspondence. Also noted it does not run on the inferior paper of the day. And don't mix with other inks. 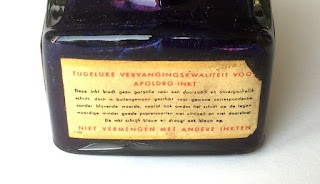 This suggests it probably is a wartime 'surrogate' product. The bottle design is of the pre-war type, so that'd fit. The Apoldro branding was I think used at least in the thirties. (Apoldro is an archaic spelling of Apeldoorn, where Talens was (and is) located.)

Also indulged in a bottle of Gimborn green 'normal writing ink'. Also a well known Dutch brand. After the 1929 crash the company hit hard times and was sold to Pelikan, who continued to use the brand name. The bottle is still full. Could be from the twenties to perhaps fifties with that label, but probably around 1930. Wonder what the best-before date is...  ;) 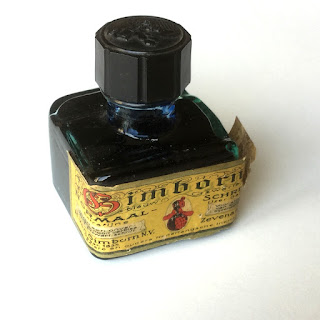 On a spree, completed it with a small box of metal nibs. Labeled to contain 144 of them, by the look of it they're all still there. That supply should last us a while - still have metal nib pens (as used in school in mid-thirties). Unfortunately all the nib boxes in the stall were taped shut and a price-label stuck on - trying to remove the tape would ruin most of the labels. Picked the box with the least tape... 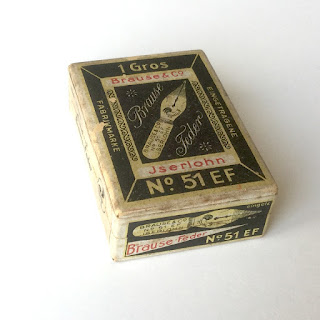 Not usual items to find in the high street. However, recently some 'rent-a-stall' thrift shops opened in the town centre. A sign of the times perhaps for high street retail. Curious and browsing around one of these stores, came across a stall with a simply astonishing assortment of inks. From the look of the labels and bottle-styles, all dating to the first half of the 20th century. Could not resist picking these items 'off the shelf'.

The store manager told me there's another lot of at least three times the current size coming in. A collector is clearing out his entire collection. Hundreds of vintage bottles of ink large and small, metal-die inks, nibs, dies, cliches, pens...