The sewing machine is clean and working again! 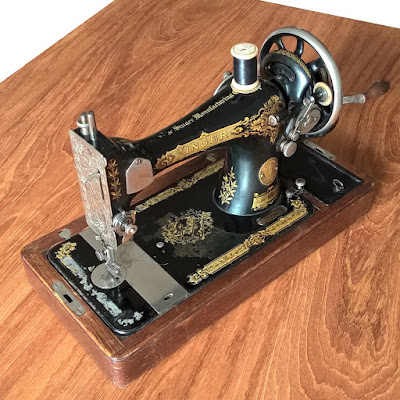 This is another niche subject it's possible to totally 'geek-out' with. Looking again at some more online resources (there's e.g. ISMACS), it turns out this is not a 128 from '29. Despite the bobbin-winder being high-up, it does not have the eject-lever for the shuttle - so a type 28. Also the serial number falls in the range released on January 8, 1930 for a batch of type 28 sewing machines (according to the really most extensive serial number database at ISMACS). So it's a 28K from 1930 manufactured in Kilbowie, Clydebank, Scotland.

In any case - a very neat and decorative small machine that again works absolutely fine. Here threaded (with of course thread on a wooden spool) and it has already been used quite a bit.

Apart from general cleaning and polishing the thread-tension disks, the only part that needed attention was the cam-roller for the feed-dog motion (white arrow). This was seized-up and sliding over the cam surface instead of rolling. This made the machine go 'heavy'. 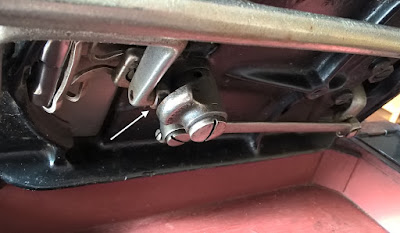 The machine tilts-up for access. Some oiling and coaxing of the wheel restored motion. With general oiling of all parts, the machine rapidly got into its own again. Positively purring away.

The hinges that hold the machine in its wooden base had come loose a little. With a large screwdriver these were fastened again. (Never thought I'd ever have a need for this large screwdriver, but it was just the right size.) 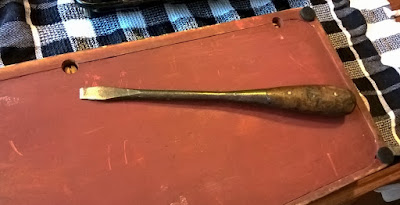 The machine drops over hinge-pins and then fixed by set-screws. These set-screws turned out to be the only part missing on this machine. Not essential, but will be nice to get a set later. It turns out that screw-thread in Singer machines is non-standard and Singer-specific. Hadn't thought about it, they started mass-production in the 1850-ies before well established standards - so created their own.

The rubber feet at the corners of the base had disappeared, leaving only the nail protruding. These were covered by some new felt feet. For grip, the felt was 'infused' with some plasti-dip.

With the machine out of the base, the date that was scratched into the bottom became easier to spot. This looks like a date from a professional servicing. Perhaps the machine was serviced and sold again by a dealer second-hand in '54 to a new owner. These were once very expensive items! 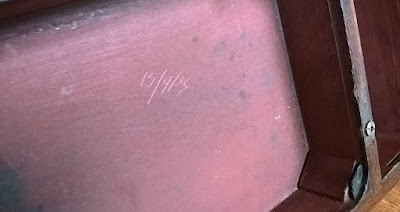 Judging by the the state of the machine and how all the adjustment screws were all jammed 'tight', the last time it was used was probably a frustrating failure. Then it was probably put away in an attic or cupboard for a few decades, to end up in the local council recycling-centre's store.

Still some small things to add/put right, but already this Singer is functional and being used again.

Highly recommended, these - both for restoring and using.
Posted by RobertG at 11:27 AM