The small wooden box still has the decal stating it to be an "Edison Bell Radio". 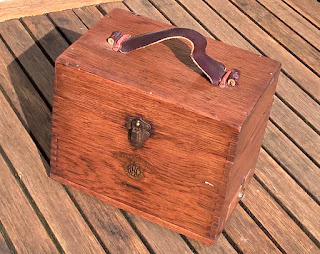 In their catalogue it was named the "Model B Crystal Set" and according to the online Radiomuseum site the model dates from 1923. Being a British set of that time, it has the BBC logo and the notice that it is approved by the Postmaster General, permit number 615. 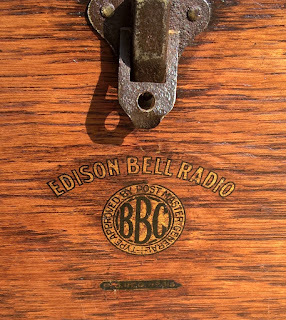 The radio is not quite in original 'as-found' condition. It's been worked on - one of the things done to it is that unfortunately the whole case was given a coat of varnish - fairly rough - covering the rusty latch and leaving faint drip-marks on the front. On the other hand, the thick layer of varnish probably helped preserve what is left of the decals.

Opening the lid, inside are all the controls and terminals. It is mostly complete; one of the studs for a switch is missing, but the twin detectors are there. Also all the terminal screws are present and correct. A shorting plug for the connectors for an extra tuning-coil would've been nice, but that'd be asking too much. Everything is a bit dusty and dirty, but this should clean up fine. 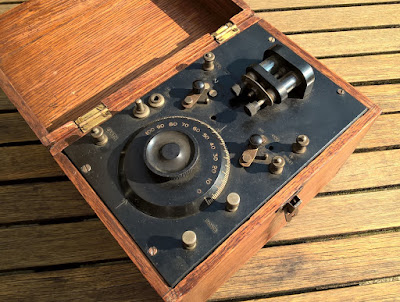 The set is rather fancy, with twin galena crystal detectors ('cat's whiskers') and an extra little lamp to illuminate the detectors. That is what the little drawer at the side is for, to hold the dry cell for the lamp.

One of the detector glass cover tubes was replaced by a length of measuring cylinder. The rear glass is original from the early 1920-ies, with a section whitened for better visibility of the whisker. 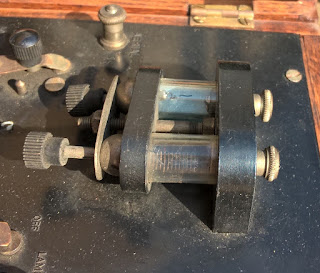 Unscrewing the "Eboneum" panel and turning it over, the key component is still there. The variator looks fine, yet to be tested. Everything related to the lamp is however gone; no lamp-holder, wiring or even battery studs in the tray. Also the wiring is a bit suspect - not certain the green cotton-covered wire is original. This radio was definitely tinkered with, perhaps already 40-odd years ago. In addition to the case having been lacquered, the wiring was certainly modified and some components were removed. 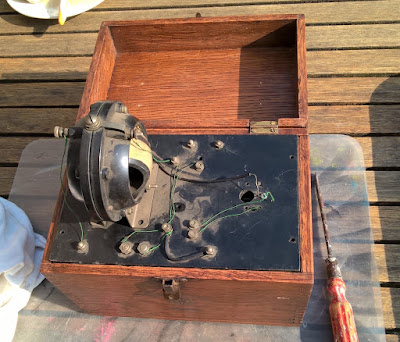 Nevertheless it's in decent shape with the important bits still present.

When new this must've been exciting new technology, but this crystal radio has been obsolete technology for a very long time.

A neat project to slowly bring back into shape and make function again.
Posted by RobertG at 11:05 AM