Sprucing up an induction coil for the crystal set

Crystal wireless set restoration: a whole range of coils could be purchased to be used with the Edison Bell wireless set. These tuning-coils change the overall system inductance and thus make the radio tune to a different frequency range.

As part of the restoration process of this crystal set, I managed to source one such coil - a relatively low-inductance specimen, a number 50 coil. Many manufacturers made such coils, with various winding methods. The Edison Bell versions of this component are nicely elaborate, wound on nested hexagons and bound to the plug-base by cord. The outside is then wrapped with tortoise-shell pattern celluloid - at least I think it's celluloid. 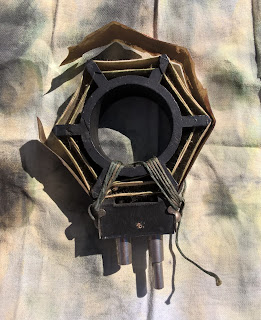 As is to be expected after 90-odd years, the item was somewhat dirty and the celluloid is cracked. (Celluloid does not always age well...) 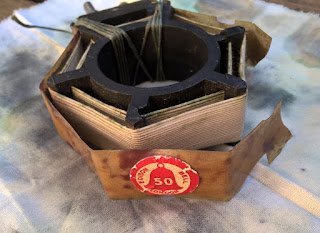 Thankfully, like most vintage technology of that era it can be taken apart and repaired. Not sure what to do about the badly shrunken and brittle wrapper, for now it's been given some backing-tape to stop it 'flapping about' to limit further damage. It could be replaced by a reproduction wrapper, but for now we'll keep the frayed original.

Untying the knot allows the green cord to be removed. Removing the two screws at the side of the base then makes the whole assembly come apart for cleaning. The glue that originally helped to hold the plug-base onto the coil has long dried out and lost any adhesive power.

All the metal parts were given a good cleaning and then a polish. As can be seen in the comparison of the two brackets - the power of Brasso...  (:

The wire makes contact with the plug-prongs by being pressed between the celluloid wrapper and the bracket. The copper wire ends are of course rather corroded by now, even when shielded behind the bracket. So before assembling, given a sanding down to bright wire-ends for good electrical contact. 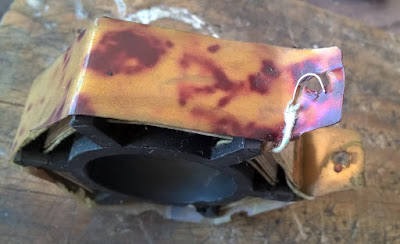 Placing the plug-base back in position, the prongs and brackets can be screwed back into place. A quick check on continuity to be sure the wires make proper contact.

The cord was rather faded. To 'spruce it up' a bit, the faded cord was given a quick soak in green dye in a small petri-dish. Before (left) and after (right). This does not restore it to original, but does evenly colour the cord and removes some very faded spots.

The next step is to tie the coil and plug together again. A bit tricky to get the lengths right, starting with the cord once through the hole and then winding left and right wraps with the ends, finally bringing the longest end over to the other and tie off. (It makes sense when you've the coil in your hands.)

With refreshed cord, cleaned metal bits and wrapper held-in-place, it can be mounted again on the set. (The Edison Bell crystal set is currently in the process of being restored. Several parts still to be sourced, but it is cleaning up quite nicely already.) 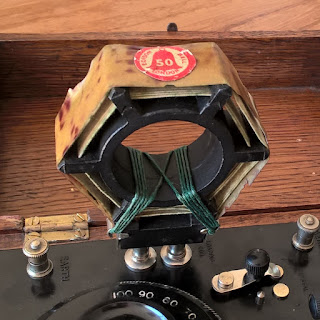