Consulting the Ames-manual; the drawband should have been clamped on the protruding screw under the carriage by a nut. That nut was obviously missing, causing the drawband to drop away as soon as tension was released. There the opportunity for the first little fix - now with a small nut again! 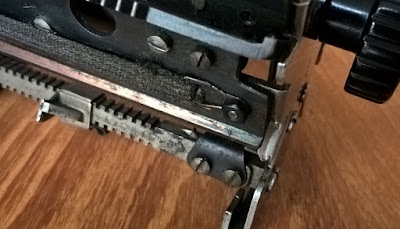 This is where my little OXO-tin of treasure came in. A few years ago, I managed to get all the removable bits from a ~1929 Remington Portable that had rusted beyond redemption - sent to me in an OXO-tin. The RP2 has gone to Typewriter Heaven (Dreaming Lo-Tech?), but leaving a valuable resource of screws, nuts and sundry bits :-) 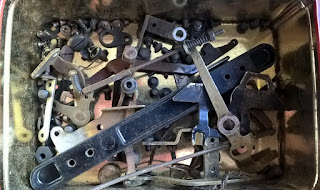 The tin already supplied screws to replace the missing body-panel mounting screws, and miraculously it had a single nut of just the right size.

A next step was removing the platen. Following the instructions of the Ames manual, this turned out to be very easy. Undo the set-screws left and right, use the right-knob as a prod to push in the left-end platen-rod and take out the platen.

Then to get access to the feed-rollers, the paper-tray can be easily removed. Undoing the pivot-screws at both ends of the carriage (green circle) allowed the tray to be taken out. Removing that gives the chance to clean out the decades of dust and dirt hidden in the carriage recesses. 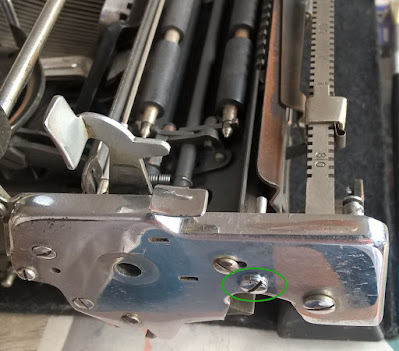 The rear and front feed-rollers can then simply be lifted out of their journals. In below image the tip of the pivot-bolt that holds the paper-tray can be seen just jutting out of its threaded-bush (green rectangle).

The problem that caused the carriage-ruler to be a bit wobbly and the paper-fingers to not really guide the paper also becomes visible. The ruler is held on the carriage by two brackets, these were both loose. What was more, the left-most bracket mounting-screw had lost its lock-nut. The bracket is held straight in the ruler-base by a slot, and can easily be tightened again. It is however a single, very tiny screw. This was not a size that I could find a nut for, so resorted to an alternative method to reduce the chances of it working loose again - lacquer! 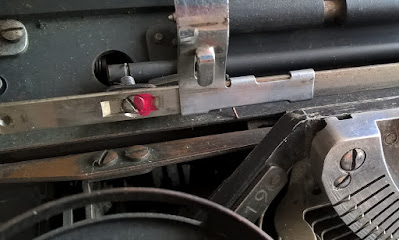 Very noticeable in pink (light red, I was told...), a small dot of nail-polish should now help prevent the little screw from working loose. (With thanks to daughter for providing 'light red' lacquer.) When mounted again, the ruler with the scale will completely cover the ruler-base strip and the pink screws.

With the feed-rollers given a light clean and the ruler-base firmly fixed again, the carriage can be re-assembled. As the Ames-manual states for such cases; reverse above removal steps :-)