After the tinkering with the carriage, wanted to temporarily re-assemble the whole typewriter to experience the result. The re-fixing of the ruler had a very noticeable effect on the carriage and how it holds the paper; much improved.

(For tinkering and test-typing, rolling a sheet around the platen is handy) 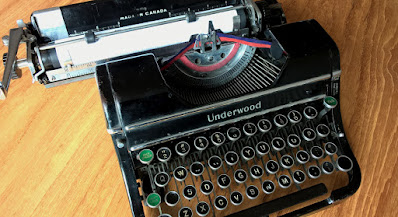 Before putting the body-panels on again, I did want to replace all the sound-proofing padding. This old (paper-pulp?) padding was warped and fouling some mechanisms, plus it is probably the main source of the moldy old-house smell. So the remaining sheets of padding were removed and used as template for cutting new patterns from stiff card.

Could have used a bit thicker card still (a next time), but the idea was to use a paperboard backing to stiffen/dampen the thin metal body-panel and cover the paperboard with felt as the sound-proofing towards the mechanism. 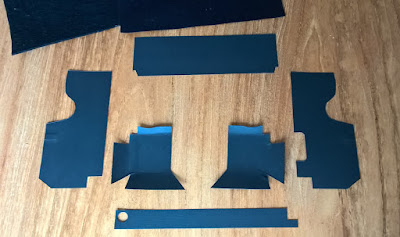 Thicker felt for the rear-panel, thinner 1mm felt for the side-panels and the cover. First totally covered the card patterns with a paper-glue (stick) and then placed on the felt - to let it settle flat placed a large, heavy book on top. When set, the laminated panels are cut out of the felt sheet with scissors and glued to the inside of the body-panels (card to the panel, felt facing mechanism).

Exercising the machine a little now that it's re-assembled, it still is not a very comfortable typewriter with a very uneven 'touch' of the keys. Not what I would expect from an Underwood machine. Despite a good clean (with white spirit, should have removed most old gummed up dirt), it is still uncomfortable to type on. What is more and worse - it now squeaks! Like there's mice.

Looking in a bit more detail at some of the typebars quickly revealed more 'issues'. Not sure if this is contributing to the squeaking, but typebar-links are not supposed to look like that. 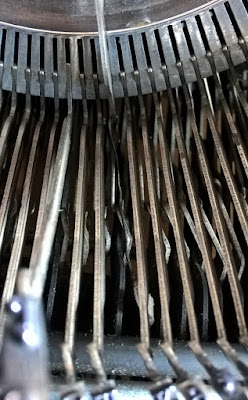 That thin, spidery link is not an original Underwood part. Several more typebars have 'suspect' linkages. Have not seen something like this before; how does this happen to a typewriter?

So now up next is tackling Singing Typebars...  :-)