The reason to get yet another Remington Portable #2 typewriter, and a 'bog-standard' specimen at that, was that it came complete with the key to the carrying case. 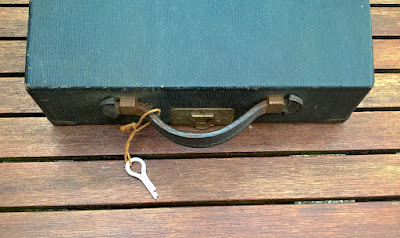 The second reason to get it and even pay perhaps a bit much for it, was that it came with the original Dutch instructions. 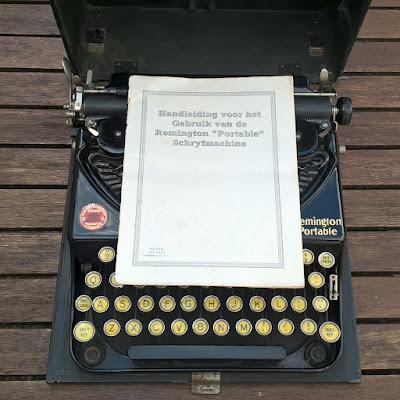 This localised version of the instructions booklet for the Remington Portable has an interesting mix of typeface-sizes. Almost every paragraph on a page has its own size. 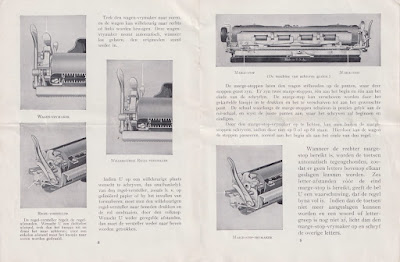 Comparing to the original, American instructions booklet it becomes obvious why this is. The page layout with text and images was kept near-identical, only needing to swap-out text blocks to print the localised (Dutch) version. With language however being different, it did mean that sometimes a lot more characters were needed for the translation of a paragraph. Still keeping it in the same bounding-box, they reduced the text size.

Another peculiarity is the spelling, that's odd I think even back in the 1920s. For 'schryfmachine' it can be excused, however the consistent use of the y also in other words ('maatschappy', 'aanwyzing', 'byna') that should really have 'ij' looks strange, certainly to today's (Dutch) reader.
The booklet was of course scanned and is now available on The Archive - for any Dutch machines that may be out there sans-instructions :-)
On the bog-standard, excellent Portable typewriter itself: Having gone as far as to give it a new platen, that paint-damage on the lifting tray was 'jarring'. Dipping into the spares-box for Remington Portables yielded a near-pristine tray of similar vintage. Replacing is a fairly simple process (remove top-panel and then 4 screws), but very fiddly and the fit of a different tray in a machine can be tricky. 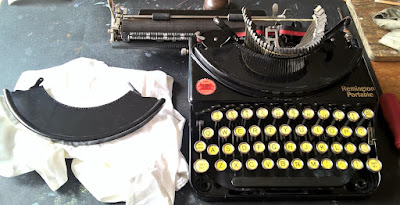 Also this part had paint-fingerprints from handling in the factory, as seems to be common for these machines - the production process must've called for lots of manual handling of freshly painted parts. 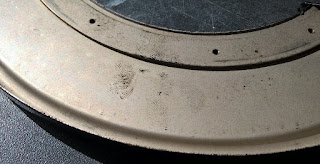 Now would there be any surviving documents, photographs or even movies of the Portable manufacturing of the 1920s? Would be neat to see - what is available is imagery of this Czechoslovakian factory of Remington Standards that definitely did do a lot of handling.
Posted by RobertG at 10:01 AM