Effect of platen hardness on the sound of a typewriter

The sound that typewriters make is determined by the overall design - and by the rubber of the platen or cylinder. To be able to get an impression of the effect of platen rubber, one machine was tested with two new platens of  different hardness.

Especially machines from the 1930s and older will have a platen covered with natural rubber that can harden over time. This hardening makes the typewriter louder and 'sharper'. Additionally a rock-hard platen is harder on the type-slugs, possibly increasing the chance of damage and reduces print-quality. An older platen's surface will often be marked by the type-slugs impact, with pitting of the characters in the surface.

Re-surfacing a rock-hard platen with new rubber is thus a good thing to do, if feasible. A hardness of between Shore 85 and 90 is I think generally advised for typewriters. When re-surfacing; what would however be the effect of choosing a softer or harder platen if wanting a less-loud machine? 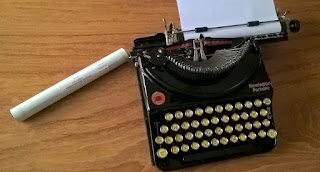 To assess the impact on sound of only the platen hardness, a Remington Portable 2 typewriter was fitted with a new platen with a hardness of about Shore 90. The sound of typing a line halfway down a page was recorded. Then the platen was swapped-out with a new, very soft platen of Shore 80. Again the sound of typing a line halfway the page was recorded in the same set-up. Then the sound recordings were compared, using the Audacity program.

The typewriter was placed on a felt-mat to dampen resonance of the mechanism with the table, relative to the sound of the impact of the type. With its very exposed typebars and typing-point, the sound of the type striking the platen should be dominant - more so than for later, more enclosed typewriters.

Seeing the spectrogram views for both platens side-by-side immediately confirms what could be heard; that the sound is different. The soft platen's energy-peak is at a lower frequency. The hard platen sounds sharp, a crisp clack. The soft platen is a more muffled pop or thup sound with the overall rattle of the machine more noticeable. (Sound snippets in a zip file.)

When comparing graphs of the spectrum of the sound from both platens sized to the same scale, it can be seen that the soft platen is different and indeed also less loud. The volume of the key-strike sounds is lower. The peak of the type-striking sound with a hard platen is from 4 to 6 kHz, whereas the soft platen's peak is in the 2 to 3 kHz range.

The volume and spectrum of the sound below about 1 kHz is essentially identical for both platens - this is the relatively low-frequency rattle and clanking of the mechanism; noise made by the carriage, keys and whole internal mechanism. (A proper analysis of the captures with e.g. Octave could probably extract much more information, but that'd be taking things a bit far perhaps - not that this is, or is it...)

The graphs incidentally make clear that further reducing the sound of the type-strike becomes less relevant already at this soft-platen's level. The general noise of the whole mechanism is already a major factor for the perceived sound overall.

The graphs do confirm that indeed the typewriter becomes less loud with a softer platen. Having said that, the print quality with a very soft platen does suffer. Also the printing becomes more sensitive to the operator's touch.

For this Portable, the Shore 80 platen is definitely too soft and the print-quality is noticeably lower than the printing with the Shore 90 platen. There is markedly more 'ribbon-fuzz' around the character. With the soft platen the machine needs a very light touch to avoid embossing the paper, so only a fairly light imprint is possible. These drawbacks will almost certainly vary per typewriter model. Not every typewriter and/or type-slug will have the same sensitivity to the platen-material properties. (E.g. on the Underwood 5, a very soft platen worked great - on this RP2 it is too soft really.)

With the very soft platen, the effect of the touch of the typist has a stronger impact on the imprint - to get an even, constant 'blackness' a very even touch is needed. With a harder platen this effect is less pronounced and within a wider range of 'touch' the imprint remains reasonably constant.

Using an extra backing sheet with the soft platen helps to bring the print-qualities closer together.

So overall; as with most engineering things, it is a compromise. The conclusion for now is that softer is indeed quieter, but at the expense of print-quality.