This 3-bank portable typewriter needed to be adjusted. The lowercase did not print fully (bottom-heavy) and the two shifts also did not line up correctly. The machine probably had something heavy stacked onto it or been generally knocked about to 'drive' the carriage lower. (To be fair - any typewriter that looks like this one did, should be expected to need some tuning and adjusting.)

Fortunately the Underwood Standard Portable Typewriter (3 bank) is entirely adjustable - once you find the right screws and order of adjusting them.

The basic approach is to first adjust the carriage baseline height so that the lowercase prints fully. Then the two shifts are adjusted to match the baseline. Finally the lock-functions for the shifts are adjusted. This sounds reasonably simple, but it took a few tries and pensive peering into the mechanism to get it right. (A typewriter repairman could have made some remarks on the fumbling about...  ...but we got there - I think :-)

In the Underwood 3-bank, the baseline is determined by the carriage resting on the Caps-shift levers. This Caps-shift lever in its turn rests on the adjusting screw. The shifted positions are determined by adjusting-screws that stop the upward movement of the lever and carriage. With these three adjustable 'stop-positions' the typewriter can be aligned completely 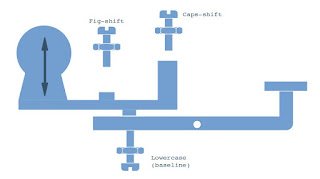 If the machine is a later model with also a right shift lever, then adjusting-screw 1 in the picture below is probably the one to start with for the adjusting. If the machine has only the left shift-keys, probably start at screw 2 with the same procedure. Loosen the lock-nuts on all adjustment screws 1, 2 and 3 and loosen adjusting-screws 2 and 3, i.e. screw out a few turns to give space for the adjusting. The carriage height is now determined only by screw 1.

This screws in for raising the carriage, out for lowering the carriage. Judging the correct height by only a few characters is quite hard - even with the qpdb-set. When however a couple of lines of text are typed, it becomes easier to detect a bias of the type, e.g. a bottom-bias with the letters 'thicker' at the bottom or a top-bias with thicker/heavier ink at the top. In case of bottom-bias the carriage must be raised, with top-bias it must be lowered.

Iterating slowly with ever smaller turns of the screw will get the paragraph typed without discernible bias in the printed text. Start e.g. with full turns up or down until overshooting to the other bias, then half a turn the other way, a quarter turn etc. When the paragraph types without bias, tighten the lock-nut to fix the adjustment in position. Best hold the screw with a screwdriver when tightening the lock-nut to prevent accidental turning of the screw and losing the adjustment.

Note: make sure that any bias is not caused by the ribbon. E.g. a ribbon-vibrator that is dirty or out of adjustment could cause the upper-end of characters to not print reliably and give the false impression of bottom-bias!

With the carriage now at its correct baseline height, adjust upwards the screw 2 for the left Caps-shift lever until the key has no 'empty travel' left. Note that there is an extra mechanism in this lever that also has some travel, so best keep an eye on the top of the adjusting-screw inside the machine as it touches the lever. Similarly the screw 3 can be adjusted upwards to remove 'empty travel' of the Fig-shift lever. Then these can then also be lock-nutted in position.

With the baseline now adjusted, the capitals have to be matched. For this, the font-panel of the typewriter should be removed. With the right tools it could probably be done with the panel in-place, but it is much better to work with the panel out of the way for better access and visibility of the parts. (Front panel removed by 5 screws, as in previous post.)

Note: if removing the front-panel, take care to make sure that at least one of the spool-ratchets is 'free', otherwise the ribbon-advance will pull on both spools, jam the ribbon-vibrator and mess up the whole adjusting of the carriage!

The Caps-shift position is determined by the adjustment-screws in a tilting bar on the left and right of the machine. First put the machine in Fig-shift, this tilts the bar forward and brings the Caps adjusting screws into view. The left screw is shown in the picture below, with a spanner of just the right size ready to loosen the lock-nut. 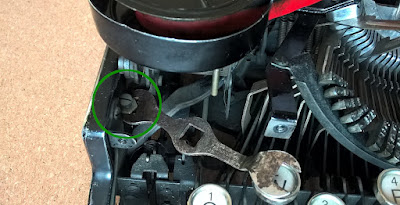 The upper- and lowercase can be tuned by adjusting both at the same time, or one by one. It seemed better to do the fine adjustment one at a time. The left screw is probably best adjusted with the carriage to the left (weight over the screw being adjusted). Typing pairs of Mm, Mn and Rr will quickly show if the lowercase needs to rise higher to match the uppercase or the other way around. With carriage to the right, the right-screw is given the fine-adjustment the same way. It is a bit of a roundabout way, needing to Fig-shift to get at the screws to make the adjustment, then back to baseline and uppercase. With again the approach of iterating with ever smaller turns of the screws, this Caps-shift adjustment should be fairly quick and straightforward.

The Fig-shift alignment is similar - its position is determined by two adjustment screws low in the machine just in front of the carriage. These can be easily reached with a screwdriver, however getting a spanner on the lock-nut is rather tricky. (Long needle-nose pliers may be needed; it is bad workshop-practice but may be the only way.) The picture below shows the left Fig-shift screw, the right screw is similarly inaccessible at the right side of the machine. 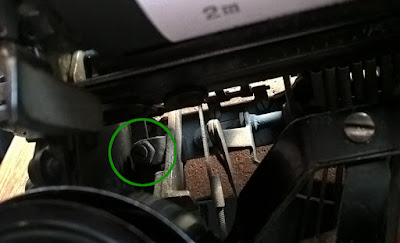 Using the comma (lowercase) with the semi-colon (Fig-shift) and the 2 with the m, the Fig-shift position is adjusted to match the baseline carriage height. This works the same way as the Caps-shift adjusting, by making sure the lowercase character rises just enough to match the position of the character printed in the shifted position.

With these seven adjustment screws now all tuned and the baseline, Caps-shift and Fig-shift at the correct (or good enough) setting, the lock-functions can be adjusted. These will likely no longer work as they should, because the retaining tab needs to match the shifted position of the key-lever. The Caps-shift lock bracket is held by by the screws indicated in the yellow oval, the Fig-shift lock by the screws in the blue oval (plus it may need the top of the Caps-shift screws loosened). 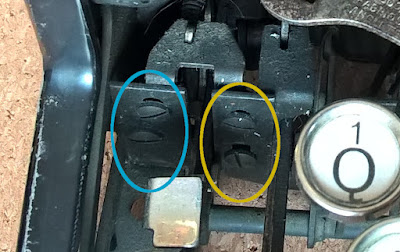 The little tab on the shift-lever needs to slide just under the bracket in the slot. The brackets can be adjusted up and down, having long slotted holes where they are screwed to the comb-plate.

With a little tweaking, these brackets can be fixed in a height that the tab slides nicely under the bracket and holds it in the shifted position without any 'sagging'. I.e. there should be no dropping of the carriage when it is held by the shift-lock. It should however be not so tight that a press on the key won't release the tab from the bracket. A bit of tweaking of their positions should make both shift locks work as intended again. 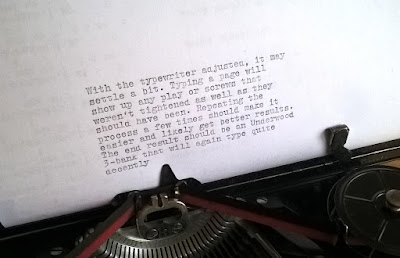 With the typewriter adjusted, it may settle a bit. Typing a page will show up any play or screws that weren't tightened as well as they should. Starting from an already (mostly) adjusted machine, further fine-tuning or fixing becomes easier. The end-result should be an Underwood 3-bank that will again type quite decently.