Adjusting for uniform key pressure on the Underwood Champion typewriter

It took a while to figure out, but one of the things that made this typewriter 'uncomfortable' to type on was differing 'feel' per key. Most of the force of the downward stroke of a key is provided by the the Ribbon Universal Bar, but there is also a spring for every Keylever that does contribute a noticeable part. 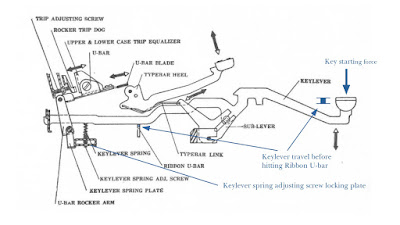 The Ames manual is again very useful with a clear diagram (thank you!). The service manual goes into some detail on various trip-adjustments, but does not expect individual Keylever Spring adjustments. This particular machine however must have been completely re-built - and was put together again 'imperfectly'. When this machine left the factory, the Springs surely would all have been identical - today there is however a varied assortment of almost-identical Springs.

There is a few mm of travel for a key before it hits the Ribbon U-bar. These first mm's is when the Keylever Spring pressure can be felt (and measured). A few keys had a high starting force of about 90 gram force (gf), most were in the 40 to 50 gf range and some were effectively zero (less than 10 gf).

So on to the Keylever Spring Adjusting Screw Locking Plate. This plate is mounted with two screws (green circles). 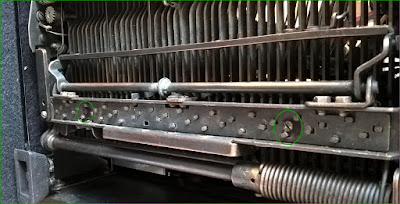 This perforated Locking plate is fairly flimsy and can get caught on the Adjusting Screw ends, so best pried loose with some care.

Using small pliers (or a special tool, probably) the Adjusting Screw can be given a few turns to tighten or loosen the spring - to increase or decrease the starting force of a key.

Keys should not have a 'zero' force; then the Keylever will not be held up to have the keys aligned and the Typebar will not be held onto the Typebar Rest. Turning the adjusting screw for some of the zero-keys had no effect at all, however. Investigating further, it turned out that these springs did not have a 'crimped' end, so would not be caught on the shoulder of the adjusting screw. The Spring just slid right over the Adjusting Screw (left image).

So the Adjusting Screw and Spring for every 'zero'-Keylever was taken out. One end of the Spring was carefully given a squeeze so that it would sit on the shoulder of its Adjusting Screw (right-most image).

The taking out and especially the placing back is a bit fiddly, with tweezers it can however be done without having to dismantle the whole machine.

With all Springs now adjustable, all keys were measured with a small force-meter over their initial few mm of travel and adjusted. All keys were tuned to have a starting force of between 40 and 45 gf. This is enough to keep the Typebars properly seated and the keys up, and feels right for the start of a key-press.

End-result is that this Underwood Champion portable now has a reasonably uniform typing 'feel', the major cause of the 'uncomfortable' typing resolved.

Cannot imagine that many typewriters would need this to be individually adjusted - factory adjustment should last forever I'd think. But just in case, this is how it's done.

(And if you e.g. want all vowels to feel heavier than the consonants, you could so adjust your keyboard :-)