Progress for the 1939 Underwood Champion typewriter

(The booklet's pages are also shown on page 125 of Janine Vangool's book "The Typewriter: A Graphic History of the Beloved Machine".)

The booklet also -of course- advises the use of Underwood supplies for best results. It shows a whole row of various ribbon tins with art-deco graphics; the item 5 in the picture. 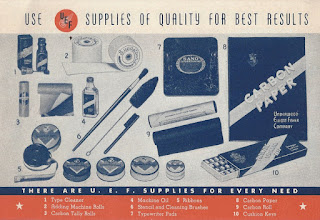 Amazingly, when doing a half-serious online scout for some Underwood ribbons there actually were a few of this type of tin available. Even tins that still contained a spool too!

A bit of an indulgence, having these shipped especially from the US, but the seller's postage was very reasonable and the tins+spool not too costly so two tins with spools (and old ribbon) were acquired. (Postage from the US to Europe in most cases has become really too much to still be considered seriously, by the way. This seller was a happy exception.) 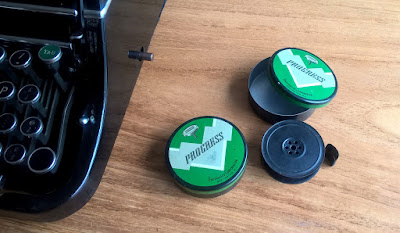 The tins have the art-deco style graphics similar to that shown in the booklet, but probably date to the 1950s. Still; not entirely inappropriate for this '39 Champion - and both contained the correct type of spool for the machine.

The remaining length of old ribbon left on one of the spools was replaced with an old, but still good ribbon. One end of this 'new' ribbon had lost its grommet, so a new one was put in. A bit larger than the original, but it'll work fine for tripping the ribbon-reverse mechanism. 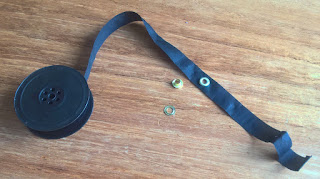 Now with a record black 1/2" ribbon and the proper Underwood spools the machine is yet another step closer to its proper state.

The temporary 'buffer' or abutment (Ames) I'd put on the segment (quickly cut from some red neoprene sheet) was replaced with a black rubber strip. This will still need a bit of tweaking on exact thickness for its optimal function. From the dimensions of the segment I suspect the original probably was a strip a quarter inch wide and an eighth of an inch (~3,2 mm) thick.

This new strip is about Shore 70, so should help give the type-bars a quick and springy return motion. And in all-black it does look a lot better again.