Cosmetic improvements, screw removed and platen of the Underwood Champion

The first polishing-up of an old typewriter is always very enjoyable and rewarding. Even this rather 'battle worn' Champion with paint-loss, scratches and parts lost is coming out looking much better. 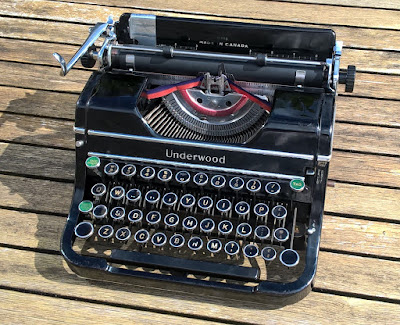 A thing that was done before fitting the body-panels again, was removing one unsightly screw. The spacebar on the 1939 Champion portable needs a small metal tab protruding inward from the front of the frame as a 'stop'. This must have broken off long ago and was replaced by drilling a hole in the front of the frame and fixing of a screw (with nut and bit of rubber hose). This screw was also jarringly off-centre, so really had to go :-)
This tab will have been a weak point in the design. The 1944 Ames service manual shows the spacebar-stop to have been re-designed as two extended prongs from the spacebar-levers being 'stopped' between the flanges of the front frame. Much more robust.
The old screw was duly wrenched loose and removed. 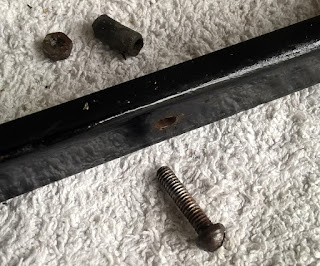 This of course left the frame with a hole and the need to create a space-bar stop. The remnants of the tab on the inside of the frame provide a basis to mount a new solution.

Sanding the thicker plate down to bare metal, it was then covered in solder (ample flux). The same was done with a brass M4 nut and this was then let drop in place with the solder on the thicker base inside the frame (as it was being held upright against a wooden board).

This then provides the mounting point for a filed-down M4 brass screw with some black-tape padding as buffered 'stop'. This new solution is certainly not as robust as the screw through the hole, but should be fine for normal spacebar use (I think...). The new 'stop' can also be unscrewed and taken out before dismantling the machine. Some shimming of the bracket under the space-bar to get the tripping-points correct and a little black paint finished the inside. With filler the remaining hole on the outside was filled-up, sanded smooth(er) and blackened. 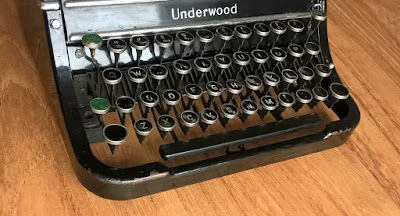 Not completely invisible, but much less jarring.
In the above image the paint loss can also be clearly seen, as well as somewhat 'tired' black lacquer. This was given a polish (car wax polish, black) - using minute amounts of polish and some buffing the transformation is quite noticeable. The bare (rusty) areas were toned down to black with various black ink-markers. As a final touch, the mounting screws were blackened and fibre washers were used to mount the body-panels (fibre washers punched out of 240g card-stock). 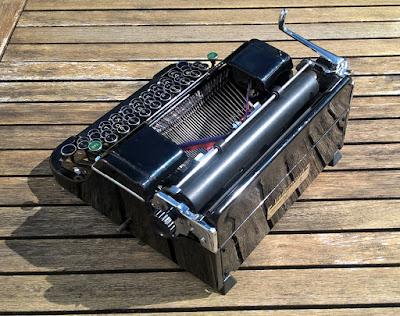 One other thing was a bit of an experiment tried on the platen and bail-rollers. Not without risk, but the bail-rollers had turned hard and were starting to crack. To soften the outer layer and hopefully prevent deeper cracks, they were given a day to 'marinate' in petroleum jelly. This is not without risk, as the lighter components of the jelly can penetrate and further destroy the rubber. So far, the rollers have indeed softened and not yet completely lost all shape, so hoping all's well.
The platen of the machine was also quite hard, rather scratched and felt 'brittle' at the edges. Some small chips had already broken out. The platen was taken out and rubbed with a light household scouring cleaner using a cloth. Then with the smoothed-down 'open' surface it was coated with a thin layer of petroleum jelly. This was given 6 hours to penetrate the scoured surface before being wiped off. After another day of 'settling in', the platen actually looks smoother, has grip and the top-layer is a bit more resilient (fingernail test...). It still is not without risk and certainly no substitute for a new rubber platen, but it is hoped it reduces the chipping-risk and will hold up over the next years to be usable. Time will tell... 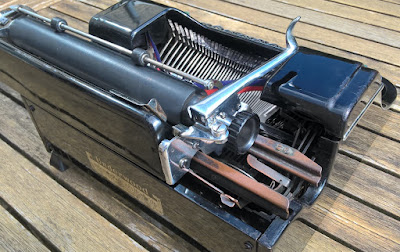 Still many little puzzles to work out (and new feet to be manufactured), but by now the Underwood Champion is already fairly usable as a writing machine. Shiny too!
Posted by RobertG at 7:33 AM