Portables with a curve 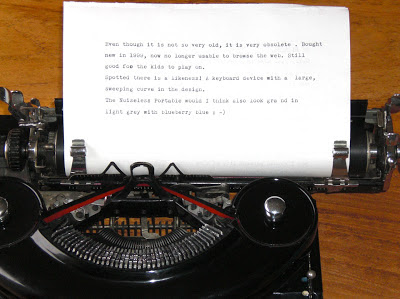 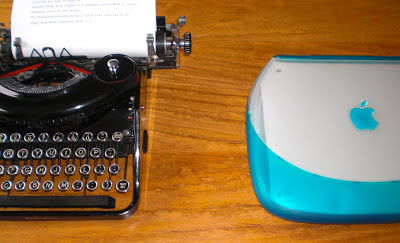 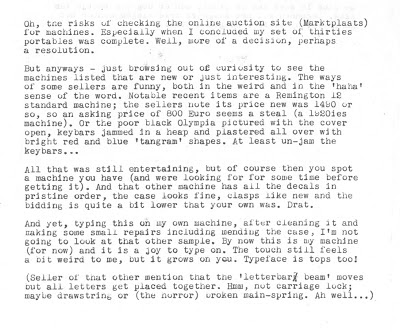 How to use Corona

Part of the quest to make the machines complete is to get the user manual with them again. Especially for the little Corona that is nice, as it so clearly has the metal strip to hold the booklet in the lid of the case.

As mentioned, I found a late copy at a bookseller (via abebooks.com) and arranged to buy this and have it mailed to me. After getting the booklet in the mail (very well packed), the first thing to do was to make a scan of it. The second thing was to upload this scan. So for reading, the booklet can be downloaded here at archive.org. (Feel free to mirror; copies are good to have; on the internet things come and go...)

The copy I got was pretty good and didn't need a lot of editing or cleaning to create a nice printing version. This layout allows for printing double sided on an A3-size printer. I've put it online and it can be downloaded both in high resolution (~40Mb) and in a more reasonable printing resolution (~10Mb).

One of the things that I noticed when cleaning up the scans, is that Corona probably used 1922-ish pictures of the product for this 1937 printing. E.g. in figure 4 it's visible that the company name on the front bar is erased-out, my guess that is to make the old photograph also usable for printing after the merger with LC Smith. 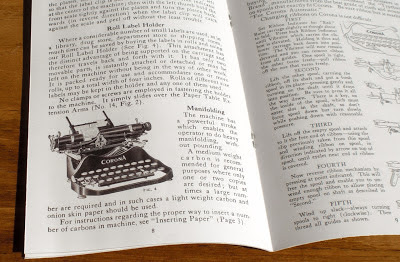 With this cleaned printing-layout a new copy was printed to keep in the box (keeping the original in an envelope on the shelf). The A3 printer was good in doing double-sided printing, turning over on the short side and keeping good alignment of back and front.

The sheets were then made into a new booklet by folding the stack (in the right order) over the folding lines, then staple and cut to size. Because I didn't have a large stapler that can take a booklet, the staples were applied by hand. Using a 1mm drill-bit to make the holes for the staples and using needle-nose pliers to bend these in place. The stapled booklet could then be cut to size with a sharp knife, metal ruler (and a cutting mat!) using the cutting guides on the outer pages. 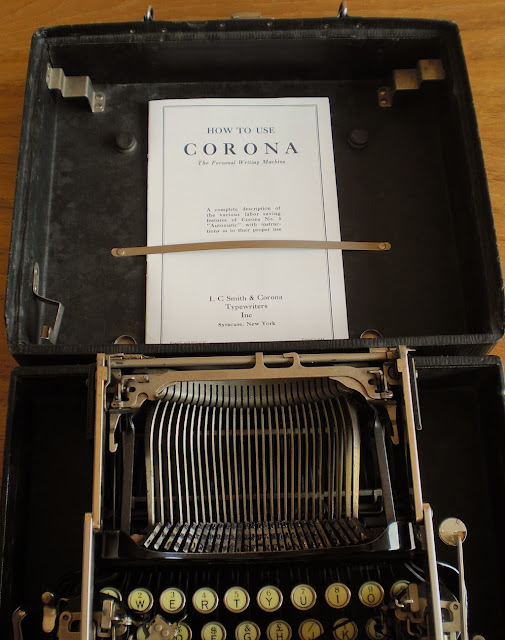 Even though the paper is probably a bit too white, the little Corona now has a 'new' manual in the box again. (Am wondering what made Corona call their little stalwart No. 3 "Automatic" all of a sudden.)

Now to scout for a small Pigeon brand ribbon tin for that clip in the lid...

The Corona 3 case, by volume

The Corona 3 is an amazingly long lived product. Not just the lifetime of the machines themselves, but the period of time it was being produced and sold (the life-of-type). A production run of more than 10 years for a consumer product with no major changes was I think fairly rare then as it is now, never mind a run of 29 years. This makes the Corona 3 an interesting item to take a look at.

So I looked at the serial-numbers lists that are available online (tw-db, typewiterdatabase and an article in an older issue of ETCetera). The numbers suggest sequential numbering, starting their numbering in 1906 and numbering sequentially right up to 1941. In that case, the serial-numbers should give the annual production volumes. (From these numbers, I've pegged the start of the '3' at 20,000 to get a ~6000 run in 1912. On the other hand, earliest reported serial number for a '3' is 12,172. There's more confusion on the numbers and volumes, e.g. from the serials the 1919 I get 81k and not 153k. The serials up to 1921 seem a bit suspect, ending with 999.)

Ignoring all the uncertainties and confusion and just taking the volumes from the serial numbers, these can then be plotted over time: 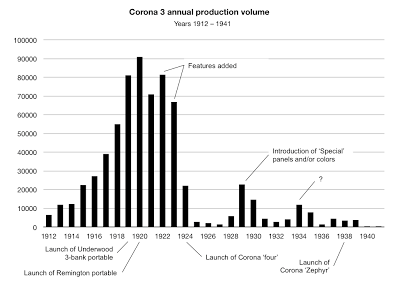 Putting this in a graph shows the meteoric rise of the little portable. It also shows that it's success comes to a rather abrupt stop, with some minor 'revivals'. Looking at this graph with some related events in mind, I've speculated a bit about some of the how and why.

I can just imagine that the introduction of the Remington Portable with a full keyboard was a nasty shock for Corona. Coming on top of Underwood entering the fray in 1919 with a 3-bank and Corona still busy seeing off the Baby Fox. Their numbers were heading for 100k/year and suddenly the year 1921 ends with 20% down. (There would be some lag, with production reflecting sell-in to the trade feeling a drop in sell-out  (from trade to consumer) a bit later, so the decline in sales may have started in e.g. late 1919.) 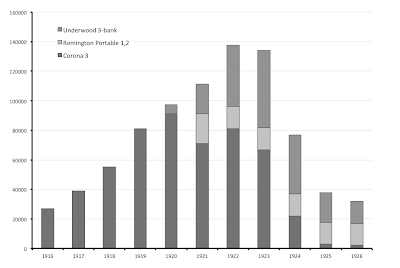 The total of volumes shows a surprisingly consistent growth up to 1924 when 'Four' is introduced. The Underwood 3-bank would be superseded by their 4-bank, new manufacturers offering portables and the market generally moving on to bigger and better things. (Note that both Remington and Underwood serials are a bit dodgy as well, very round numbers. Also (to me) not clear between 3-bank / 4-bank.)

With competition in the compact portable market-segment now from both Underwood and Remington, Corona need to respond. These competitors are too large to drive off with advertising or price promotions. Trying to sue them into oblivion (Fox) would have been out of the question for the same reason (even if there had been a possible case). Even worse; their products compare very well against the little '3'.

If work had not already started on making their own 4-bank offering, it was doubly important to do so now.

In the mean time, a bunch of improvements is made to the '3' over 1921-1923. The machine is widened, with shift keys at both left and right and the carriage is also widened. Automatic ribbon reversing in 1922 (thanks to Mr Kernighan for pointing out that datapoint!) from serial number 500,000 (?) up, would have allowed for some 'news to the trade' to drum up sales. With these improvements the '3' compares a bit better to the competition.

Maybe this contributed to a slight rise again in '22, maybe the 10k less in '21 reflected the trade still having too much stock from '20. Who can tell...  Around that time (1923?) amongst other improvements an extra two keys are added. 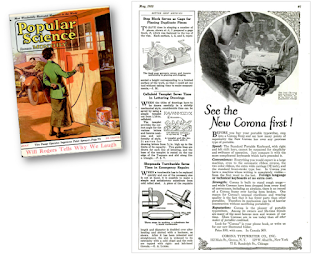 They needed to live off their old product until they could introduce their own full keyboard portable with the 'Four' in 1924. Then in 1924 immediately the volume of folding '3' machines plummets. Advertising from then on is showing the new flagship product 'Four' model only.

On an aside; with their market (and likely their margins) under pressure, working on their own response, they would be investing in the new product and tooling. This probably means that the financial position of Corona would be at a relative low in 1924, with the launch-costs of the 'Four'.

With the introduction of the 'Special' in (I think?) 1929, the level is again at a respectable 20k, showing a drop off over the following couple of years as would be expected after a new product introduction. Adding a splash of color and fashionable paneling makes also the '3' product sell again (a little). Some examples from a quick image search:

What is quite remarkable is the variation; a choice of both base and panels in colors, but also plain lacquered in one color with no crinkle panels. Again odd is that these are all marked 'Special' on the front panel but no longer have the automatic reverse. Seems Corona was having a ball with product-diversity. This is not good for cost control today, and my guess is this was not good back then either.

The year 1934 again shows a small spike in volume. This may be just the random fluctuations of a low-volume end-of-life product, or it may have been a new advertising push to counter the very low-cost market-segment. The price is by then also quite low, maybe this contributes to a bit of volume again.

However with the price now down to USD 24,50, even without any tooling cost amortization the margins would not have been great anymore. Material and labor still needed to go into the machine at about the same level.

Keeping a type in production over such a long period after 1924 with such small volumes (and margins) raises the question if that wasn't at least partially a sentimental, emotional decision.

Or rather; I suspect that nobody in the Corona company would ever dare to suggest to axe the folding Corona 3 - their core, founding product.

Hardly a typewriter at all...

It does write 'type', but without most of the parts that normally make up a typewriter.

From 1935, haven't been able to spot the patent of this one yet. Rather do suspect the inventor would have tried to file for one...

The detective stories by Raymond Chandler featuring his Philip Marlowe character methinks qualify as being part of the 'hardboiled' detective fiction genre.

I learn that Mr Chandler wrote these stories using an Underwood Noiseless machine, a very soft-spoken writing machine. I'm imagining he would have used a portable (77?), but don't know or can't find the online reference I got that impression from.

Odd. Whilst Agatha Christies' puzzle-like 'whodunnit' stories were typed on a Remington 5T portable (pretty loud type-clack) these 'hardboiled' were written on a gently soft-striking machine (only the ka-chung of the carriage).

I wonder. Does it add something to the experience of reading or listening to a Marlowe story to imagine it having been typed with the muffled ka-chung of his Noiseless?

To try, the short story 'The Dear, Dead Days' is a very gentle story (nobody dies) and not so 'hardboiled' at all. Though there is plenty of wisecracking.

A more 'hardboiled' story to enjoy is 'Trouble Is My Business'. This one was first broadcast in 1948, starring MGM's dynamic young actor Van Heflin. The audio quality is not so good on this one and there is almost two minutes of commercial seduction to sit through (no, not soap - toothpaste). But still, do sit through the commercial going all lyrical over the minty new flavor to get to what I think is a very typical 'hardboiled' Marlowe story. Now imagine typing all this out on a Noiseless...

In any case; even today I find these are enjoyable short radio-plays. Excellent for listening to during a long drive or when tinkering (with a machine).