Unexpectedly new on the shelf

This was not expected. Hadn't thought there'd be any of these machines still floating about, especially in this area of the world - let alone on but a stone's throw away! Was alerted to it being on the national classifieds site, asked if this was an interesting item perhaps. 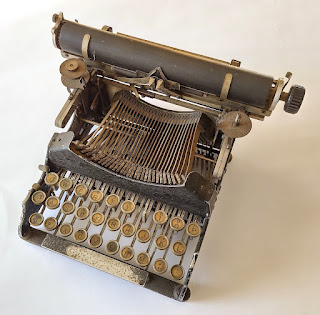 Even though it was painted black, the outline was recognisable - very similar to the early Erika's. This really was a Standard Folding Typewriter! A pioneering design that effectively started the Portable Typewriter as a product category. So despite it being black, missing a key and sundry other parts (e.g. line-feed lever?), contacted the seller and quickly agreed a price and picked it up :-) 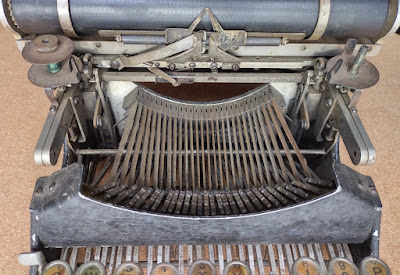 A bit of a 'barn-find' - it actually was sold out of a barn by an estate-clearance/trader who'd picked it up from a local farm in Jubbega that had been 'full of stuff'. Ergo no idea about this typewriter's provenance or history. From the crackle-black paint it is probable it was refurbished thoroughly some time in the 1930's. From the wear on the black paint on the space-bar, it was genuinely used after that. However, from the several missing parts and general condition, it looks to have been then 'neglected' for many decades. 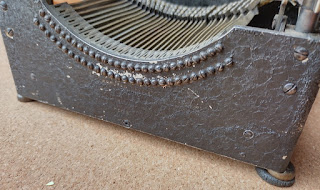 It nevertheless really is a Standard Folding Typewriter, a No. 2. The stamped lettering on the back-plate is difficult to read from the thick paint - the serial number is (probably) 8644.

It will first be on the shelf, while the currently active projects are enjoyed. When its turn comes for repair and restoration, will be a great look at how the Corona 3 (and little Erika) got started. 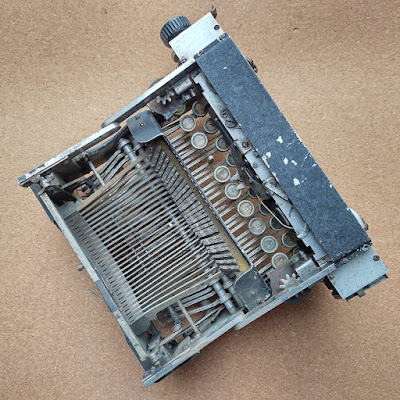 Never expected to ever be able to hold one of these original Folding machines - and here we now have one and it's a project too! :-)