Found another new thrift store in town, well perhaps more a junk shop. This one has a very wide variety of items from fairly credible old furniture to broken electronics and assorted 'junk'.

First spotted is this remnant of a typewriter. Somehow somebody removed and then lost the body-panels. (Why?) 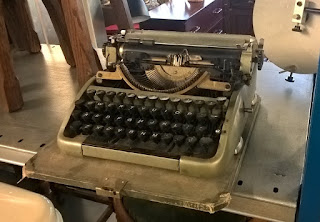 Even the back panel is gone! (Having gone that far. why stop and not take off the carriage cowling.) Makes the typewriter a bit harder to identify... 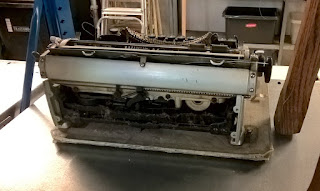 Next up was a (to me) uninspiring modern machine, a Royal Apollo 10 that will originally have landed in Germany with its QWERTZ keyboard. 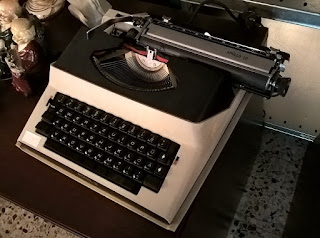 On the shelf above it sat an adding machine. Jammed solid with unfortunately a cracked housing. (Not a typewriter, but we'll class it as related machinery.) 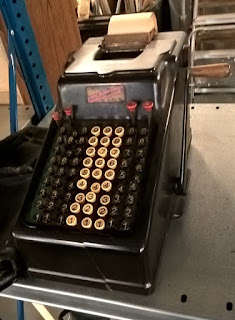 The next and last machine was a solid looking Remington standard looking somewhat unhappy. This is probably the maximum number of typebars that can be jammed in a machine. Unsure what caused the damage to the paint and wordmark on the top cover; it almost looks as if it's been too hot. Was it baked? Blowtorch? (That would explain the tabulator-bar being all bent.) 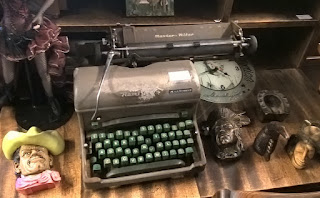 Not sure how wel that white label will come off (but not much lacquer left anyways), it advertises that the asking price is a full 15 Euro for the machine.

No prizes for guessing what machine was purchased - no typewriters were acquired that day. (Nor any adding machines, for that matter ;-)
Posted by RobertG at 3:18 AM 3 comments: 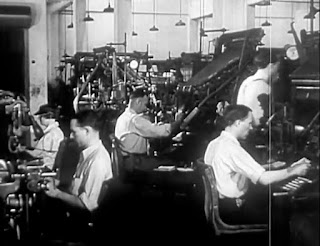 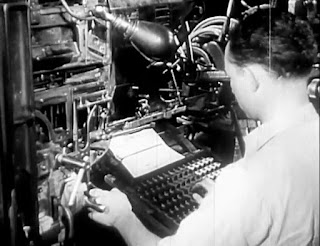 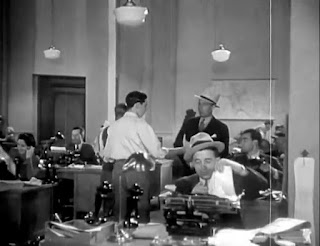 No interest so niche... (a screwdriver)

It's been said before; these are amazing times. With the global flea-market and antique-shop that is the internet, it was possible to find and purchase for a very reasonable sum the correct pattern screwdriver for the re-boxed nickel-set.

To be fair, for a mid-twenties set it would more likely be the longer, closed nickel item. This type is more common in 1915 sets than '25 sets. But this is the exact pattern as shown in the parts-list in the 1920 booklet. 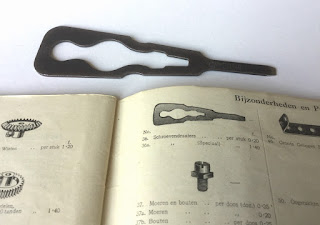 It is again confirmed. There is not a niche-interest so tiny that it is not served somewhere on the internet.
Posted by RobertG at 8:12 AM 3 comments:

The typewriter case that folds open to form a proper table was patented, published as US patent 1,661,015 filed in 1926 and published in February 1928.

The case folded open as a table. 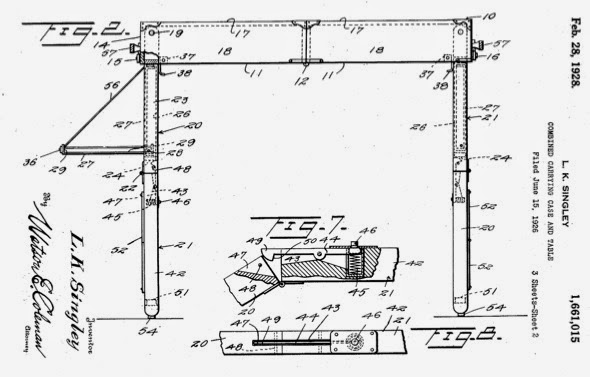 And closed for keeping the typewriter in it (and all the legs as well...).

Somehow it didn't catch on. Wonder if the design actually made it beyond one prototype. Compared to the later travel tripod cases from e.g. Underwood, the design perhaps has drawbacks:
- Even though it's a complete desk, the typewriter needs to be taken out of the case completely and then placed loose on the table-top (the outside of the case).
-The case cannot be used in the normal portable manner, cannot just open the lid to have the machine available for use.
- The complete desk and folding wooden legs likely are somewhat heavier and bulkier than a metal tripod in a regular case.
- The narrow wooden 4-legged table needs a decent surface to stand on, a three-legged stand is likely more forgiving and stable for typing use. An adjustable leg's a hassle (and cost).
Nevertheless; an ingenious case it is.

This type of folding case seems to have been 'in the air', looking at this folding lunch table/box from the same year... 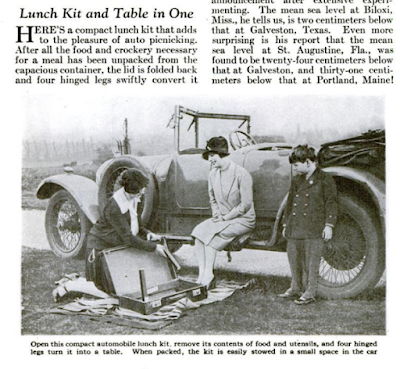 A while back I got a small collection of early nickel Meccano pieces. Despite their dating to probably around 1920 they were in great condition. In the meantime some extra period-parts were found to make it almost a set that can be built with.

To keep the collected nickel-era parts a bit better and add to the overall experience, decided to create a fitting storage box.

The smaller sets of that time were sold in cardboard boxes - the gallery of pictures available at the New Zealand Meccano Club site and on the net in general give a good idea of the type of case. It was made of cardboard, sometimes with wooden parts for strength, and covered in black paper or leathercloth. (The largest sets were available in sturdy oak cabinets.)

Today in the internet-age the delivery of online purchases yields a continuous supply of sturdy cardboard - saving a few of these boxes gave a good set of strong and flat sheets to construct a box with. Making up a dimension and arrangement of compartments to fit the parts and not following a very specific prototype, a new box was taped and glued together (paper-tape and PVA glue). Most of the original boxes had lift-off lids, for this case however a hinged lid was chosen. Using a cotton ribbon backing to form the hinge. The inner and outer surfaces were covered with a light-green and black covering paper.

The most important finishing touch then is applying the labels. 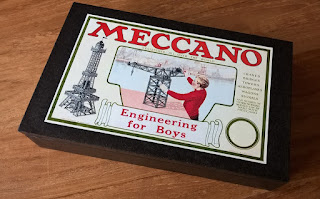 Again the galleries in New Zealand provided several high-resolution scans of various labels. This provided enough source material to assemble and mock-up a lid top label. The box lid label is a reasonable representation of a label as used in the early 1920-ies, the outfit number would have been in the roundel at the lower right corner. 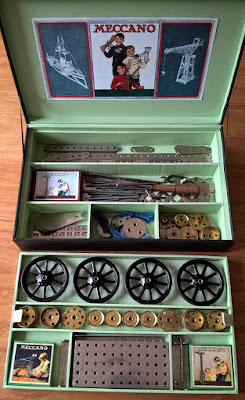 The lift-out tray has small lifting tabs of cotton ribbon. The tray layout is inspired by the layout of the inventor's outfits of the day. A regular outfit would not have had the large 3" spoked wheels. Even though some models in the 1920 manual use them, they had to be bought separately as spare parts. One could also buy a special accessory inventor's set - these would contain a set of large wheels as well as the newly introduced braced girders.

The image on the inside of the lid seems a bit quaint, even for 1920-ish. Meccano started using this image around 1913 and kept using it well into the twenties. Another aspect that remained constant for a long time is the unattainable models on the box lid.  From these very early box labels right through to the 1960-ies, they showed large structures that could never be built with the contents of the box. Something to aspire to, I suppose. 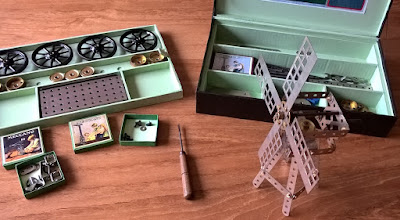 Building the occasional smaller model with the vintage nickel 'set' is now very much possible and a pleasure. Only a very few parts extra needed still to make up the content of a period Outfit 1, and already it has a wide range of special extra parts such as the windmill sails. Reproduction small parts boxes hold the brackets and a set of new brass nuts and bolts. Overall it now is a bit of a time-warp experience.

Stored this way the nickel set is great for playing with again, also by the youngest - there is no paint that will be wearing off or any fragile vintage packaging to worry about. Building a model from the manual is not what is wanted however; freelance planes, cranes and automobiles are more the thing. (Aeroplane with some parental assistance - fuel cart his own construction, borrowing the boiler from a '29 set.) 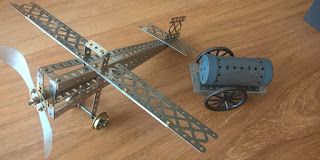 Should anybody have some stray nickel bits and want to replicate (or just have a good look at the graphic design of these vintage toy labels), the images in higher resolution below: 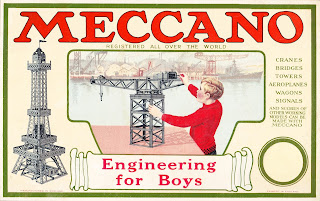 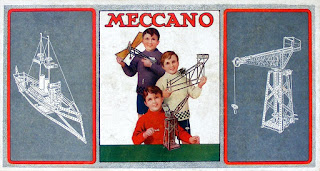