Having gotten all the rollers off the carriage (amongst several other items...), on to fixing all the rubber.

The rubber on the front-rollers had gone soft and tar-like, so cleaned the front-feed rollers down to the bare brass cores. Seems odd, but Remington must have used different rubber for the front rollers, rear rollers and platen as they all have deteriorated in their own particular way. Perhaps different suppliers.

Anyhow this meant the front feed rollers needed to be re-made. With their small diameter only two layers of small diameter heat-shrink tubing was enough to make decent rollers again. Small sleeves of about the right width were cut off and a hairdryer at the max has just about enough heat to shrink the tubing nicely around the brass cores. (Pliers to hold roller on rod in front of heat.) 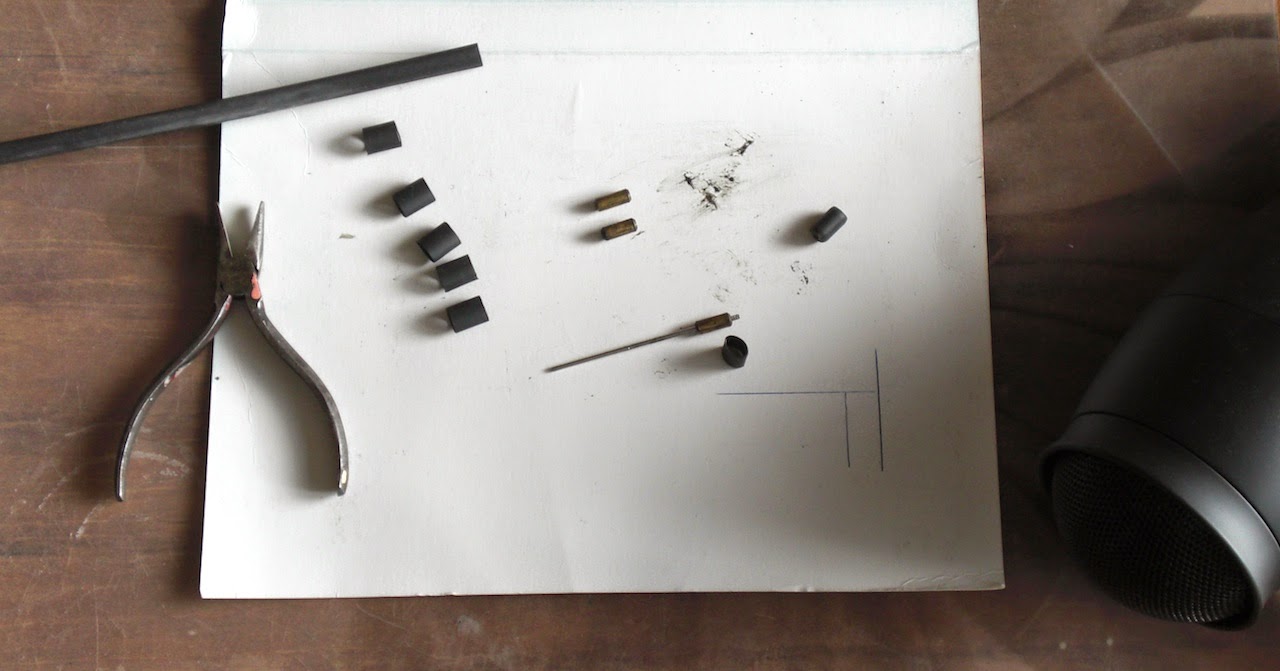 The rear-rollers had flat sides, but otherwise still fine. Before cutting it all off and making new from heat-shrink tubing, first wanted to try to make the original rubber round again. Letting the rollers soak for a minute or so in hot water (around 80 degrees C - water just off the boil) and then rolling them between two wooden surfaces worked reasonably. Note that the old rubber will give off black, best use cast-off bits of wood. Fixed with cold water, then sanded off what remained of the ridges and make smooth with fine-grade waterproof sandpaper. Not perfect, but round enough to roll. (Oddly the brass core in the rear-rollers is not always concentric to the hole, so when building up with heat-shrink can give slightly eccentric rollers.)

The platen was rock-hard and brittle. First tried to find a suitable length of radiator tube (and failed - right size but not smooth on outside), then settled on trying the inner-tube treatment (inspired by a.o. Scott's recent post on this).

A nice, soft, used inner-tube for a bicycle of 28" x 1 5/8" x 1 3/8" was found. From a reputable make (Vredestein) and fairly large in diameter for the size it has a wall thickness of about 0.9 mm. The platen is such a tight fit in the carriage and paper-tray, that the platen needs to be reduced to less than 28mm in diameter for the covered platen to still fit. This is a black and messy job. Best done outside. Not near any laundry. Wear a boiler suit :-) 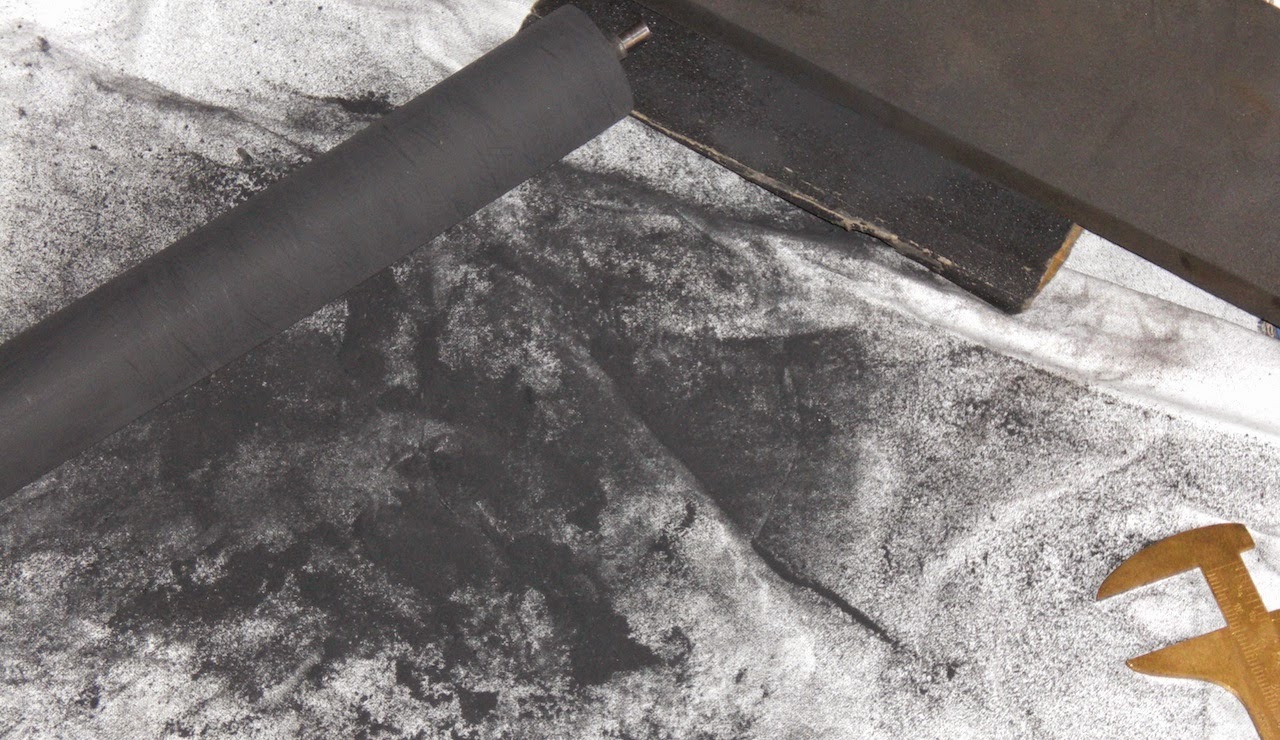 Using emery cloth and the platen firmly clamped in the workbench got it to size finally (and still cylindrical). Using the hairdryer to make the length of tubing warm (around 50 to 60 degrees C) and supple, it slides on fairly easily using talcum powder on the platen. (A good thing too; after the first full carriage re-assembly had to take it all off again to sand down further to about 27.5mm diameter.)

The hard part of the carriage was the complex left side bracket assembly. The line-feed clasp is fairly easy to place, but the spring to return the carriage return lever was not all that obvious. This is held in place by its own small bracket that is held under a nut that goes on one of the screws that hold the left carriage bracket (red arrow). After bolting it down, the loop of the spring can be hooked over the rod of the carriage return lever that sticks through to the inside (blue arrow). This rod also goes into the fork of the line-feed clamp that pulls the platen linespace ratchet wheel. 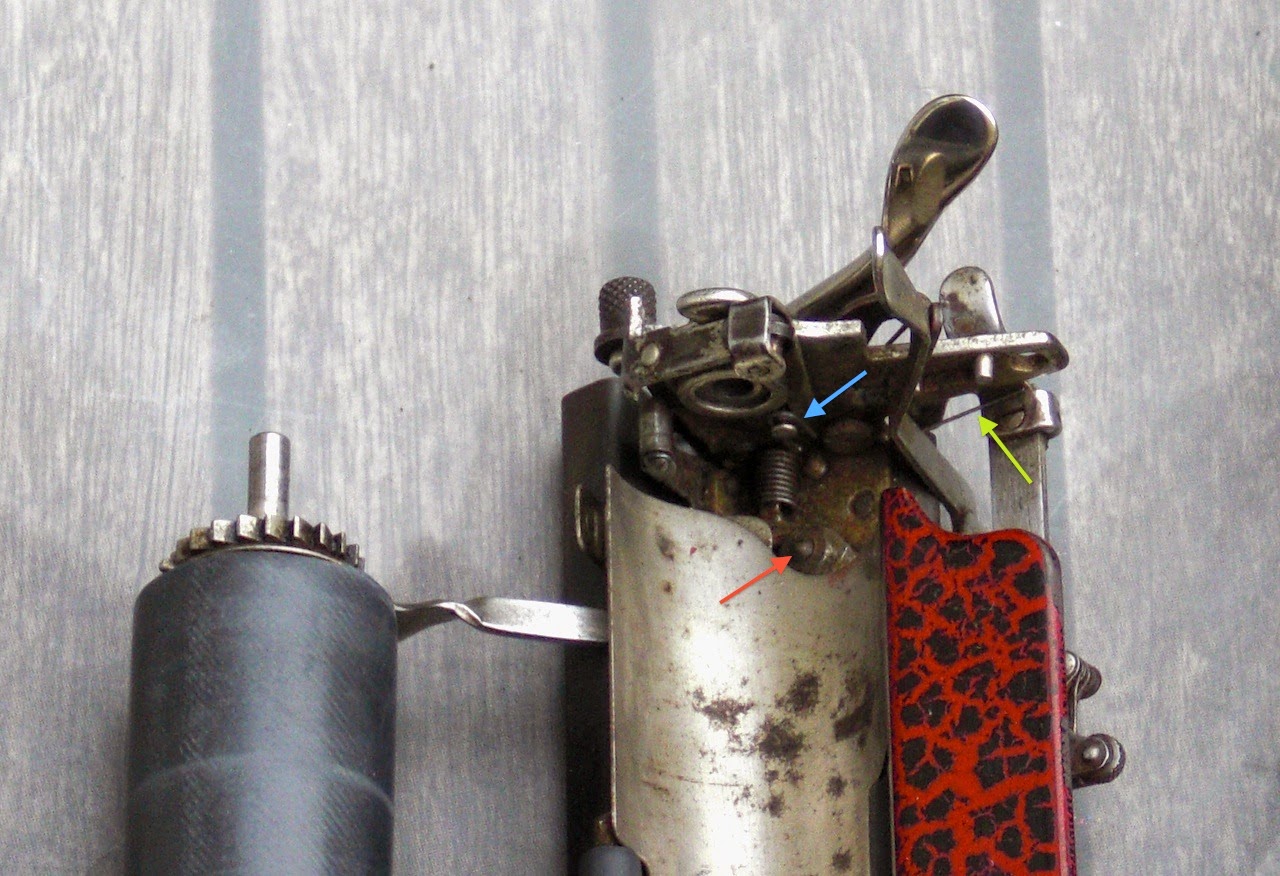 When mounting the margin bar, take care that the small spring rod goes on top of the bar in the left edge (green arrow).

(Proper way to remove the platen is probably not to remove the right-side carriage bracket as I did, but remove the knob and pull out the rod or some such. The carriage knob screw however is rusted solid. Did not dare to force it and risk breaking the knob. Right-side bracket was less puzzling but also a pain to screw back. Can be done with magnetized screwdriver to place the nut back over the screw. If you ever get there yourself, you'll see what I mean :-)

This will all probably make a professional typewriter repairman cringe, but it's getting there and really is an enjoyable journey of discovery :-)
Posted by RobertG at 10:41 AM 2 comments: 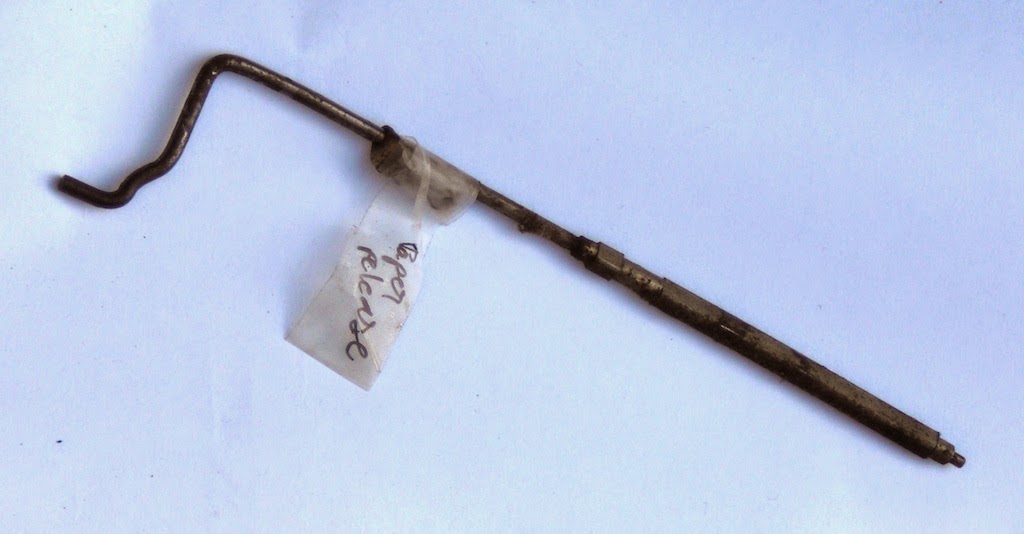 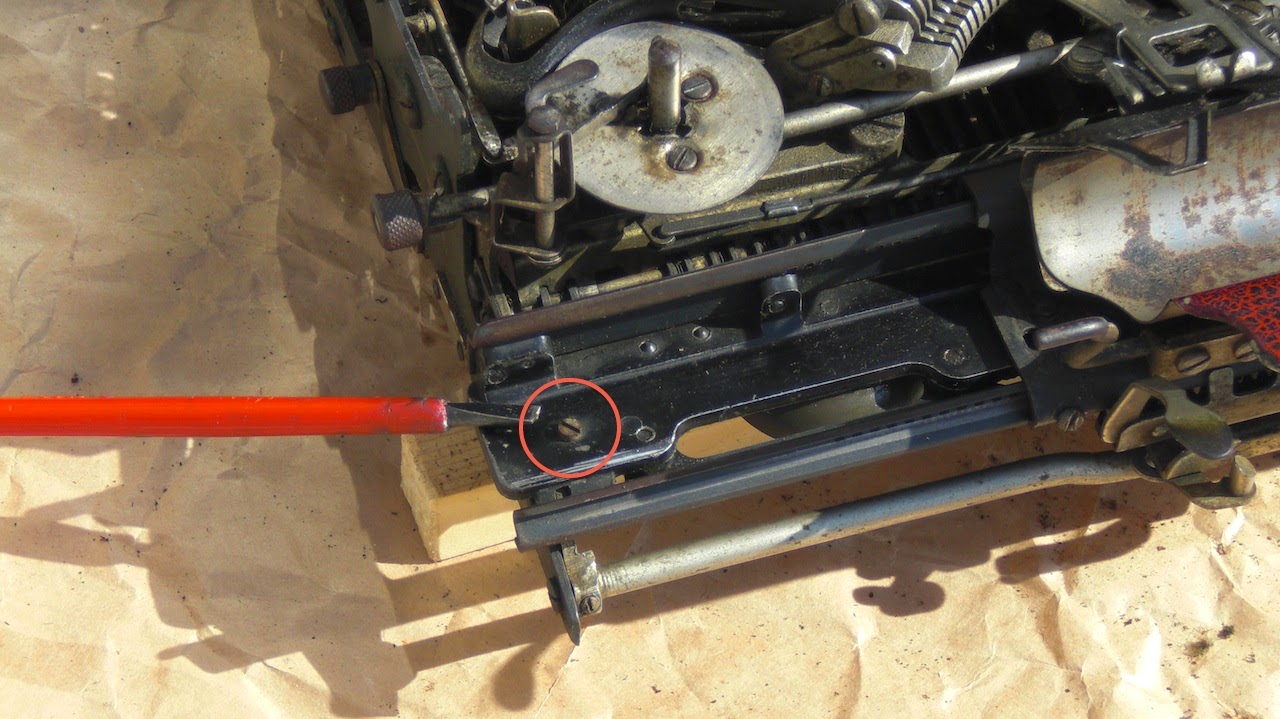 Have started on the Remington Portable 2 - first step of taking it apart. Well, at least as far apart as is necessary to replace the feed rollers, touch-up the housing shells, replace felt, deep clean etc. Putting a rubber tube on the platen would also be good.

Taking off the shells was fairly straightforward (taking pictures every step of the way, bagging every screw and part). 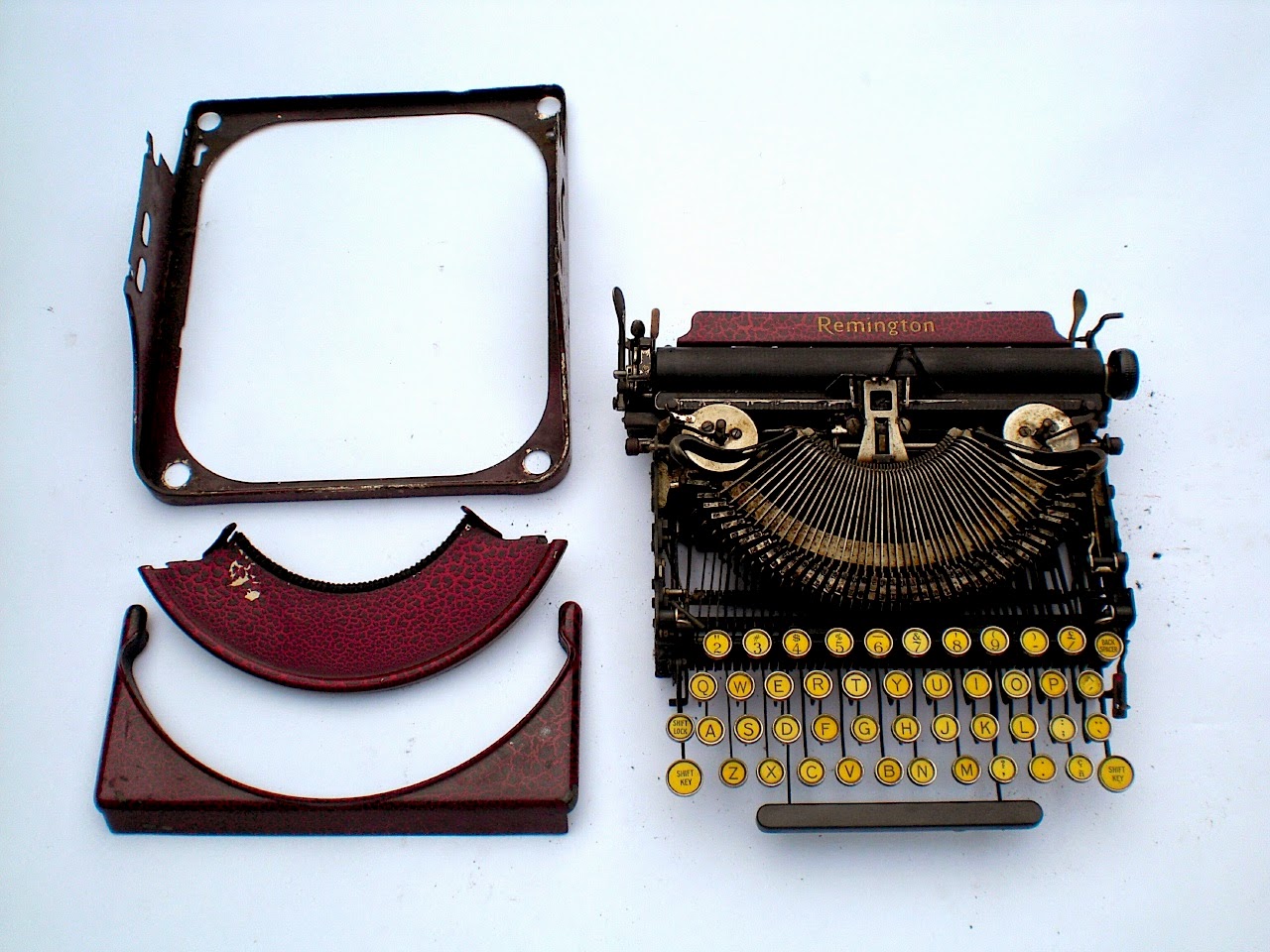 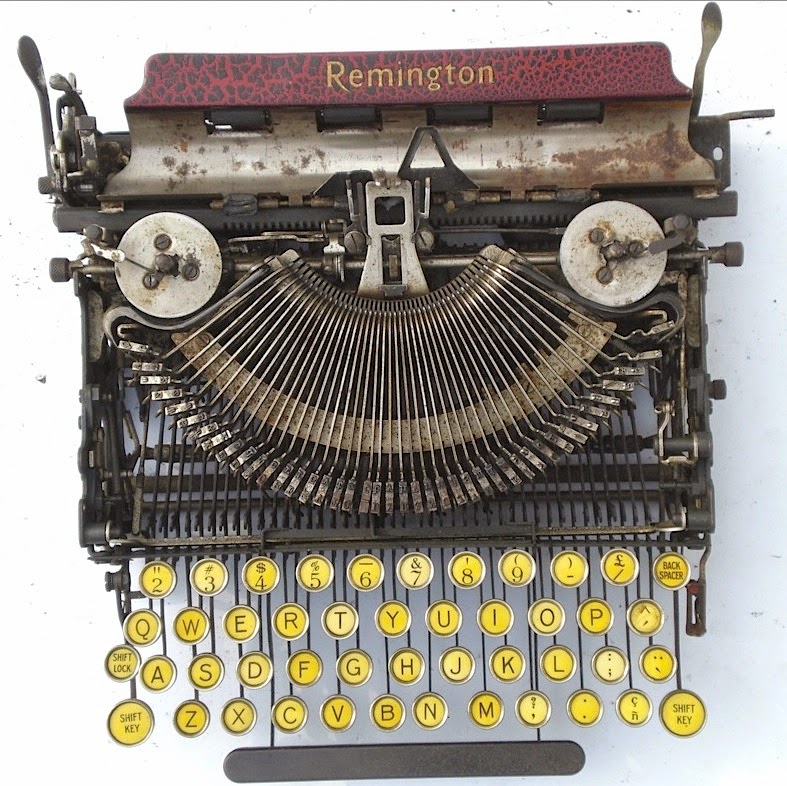 It was the putting together again that I was initially worried about, but just taking it apart is puzzling already :-)

Any hints or suggestions most welcome. It's an intriguing puzzle...
Posted by RobertG at 11:03 AM 6 comments:

Prompted by the posting about a book on sliderules over at Munk.org, made a scan of the leaflet that came with a pocket sliderule I got recently. 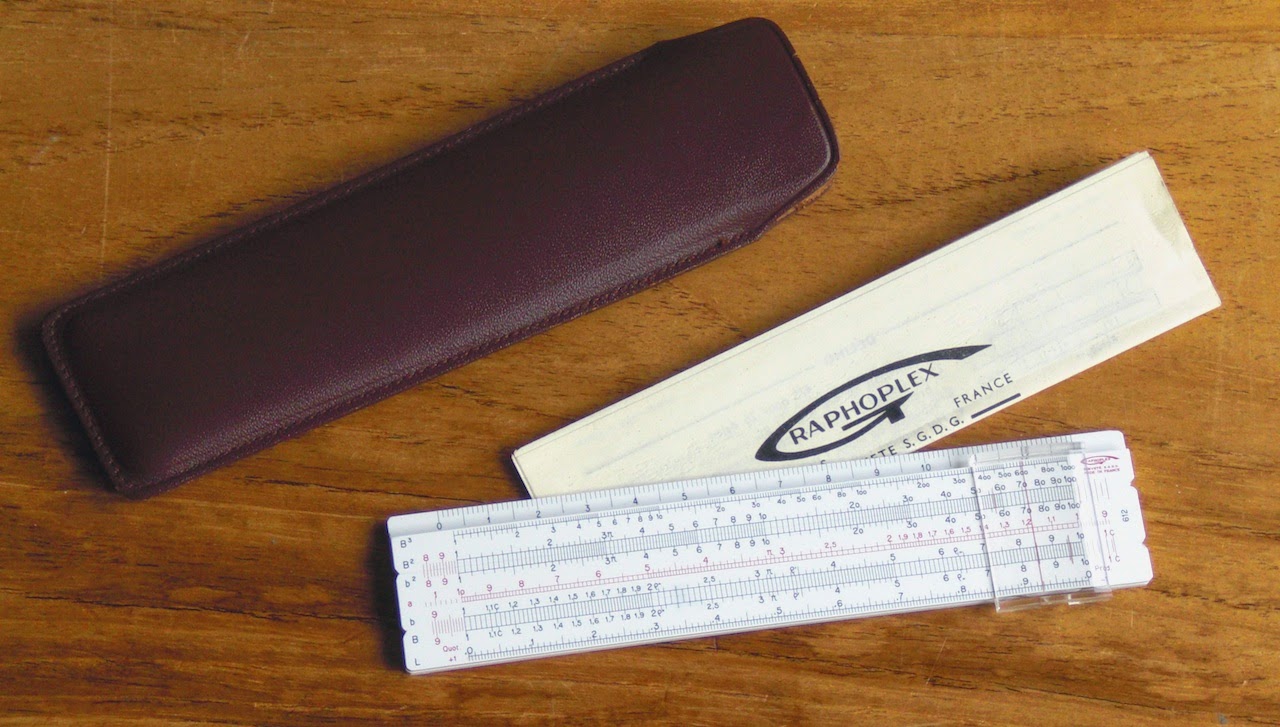 It is a regular 'Rietz', but rather small with a 12.5 cm scale. This one looks and feels absolutely new and unused, the leather sleeve is pristine as well. The only marking on the back indicates it was intended for Heemaf, either for use by the company or perhaps more likely meant as a promotional gift. The overall look and feel makes me guess this could be as recent as the seventies, but hard to tell really.

In the small leather sleeve with the small sliderule comes one sheet of instructions folded up equally small. A very condensed course in using this system 'Rietz' sliderule (in Dutch). 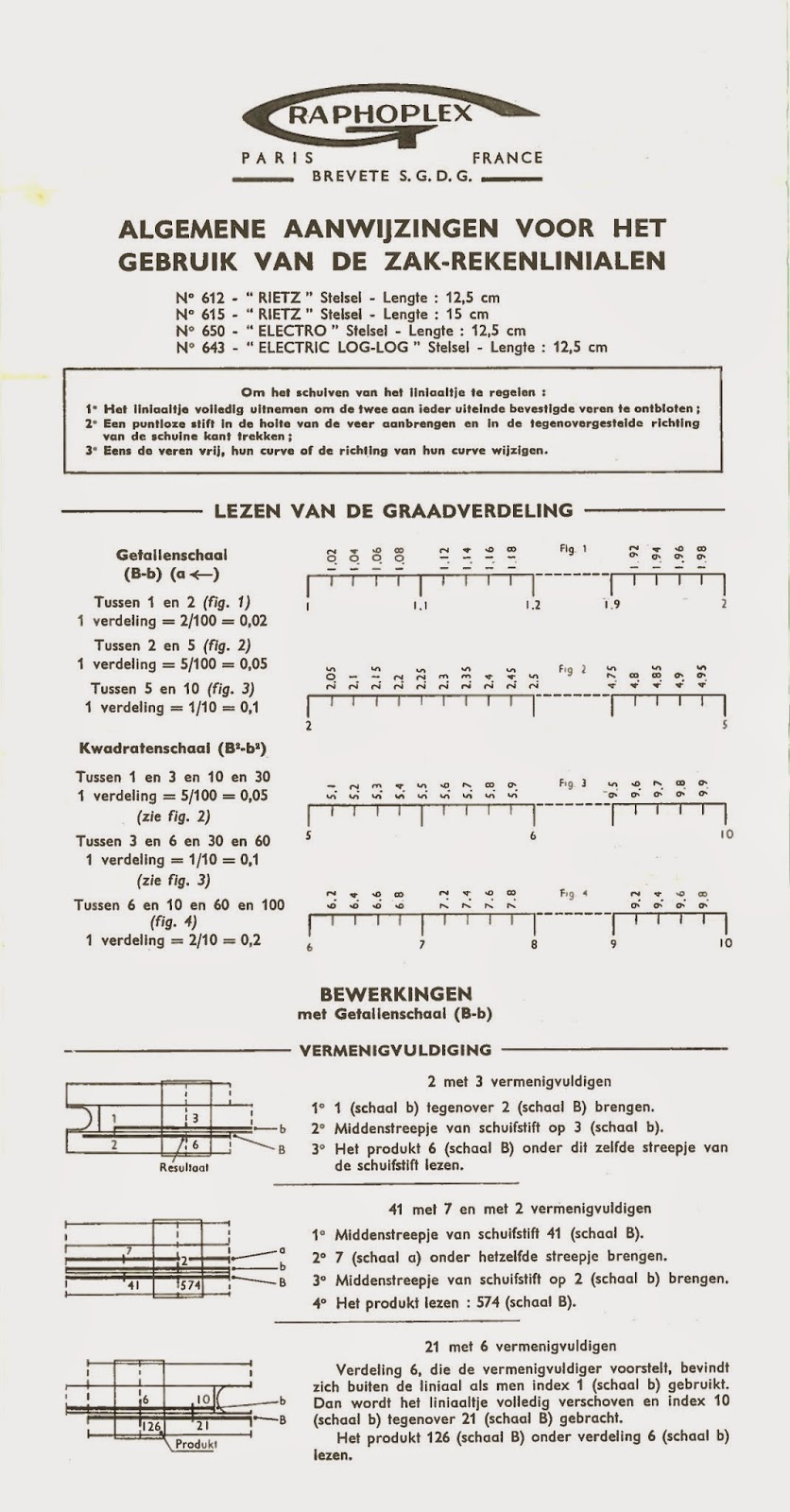 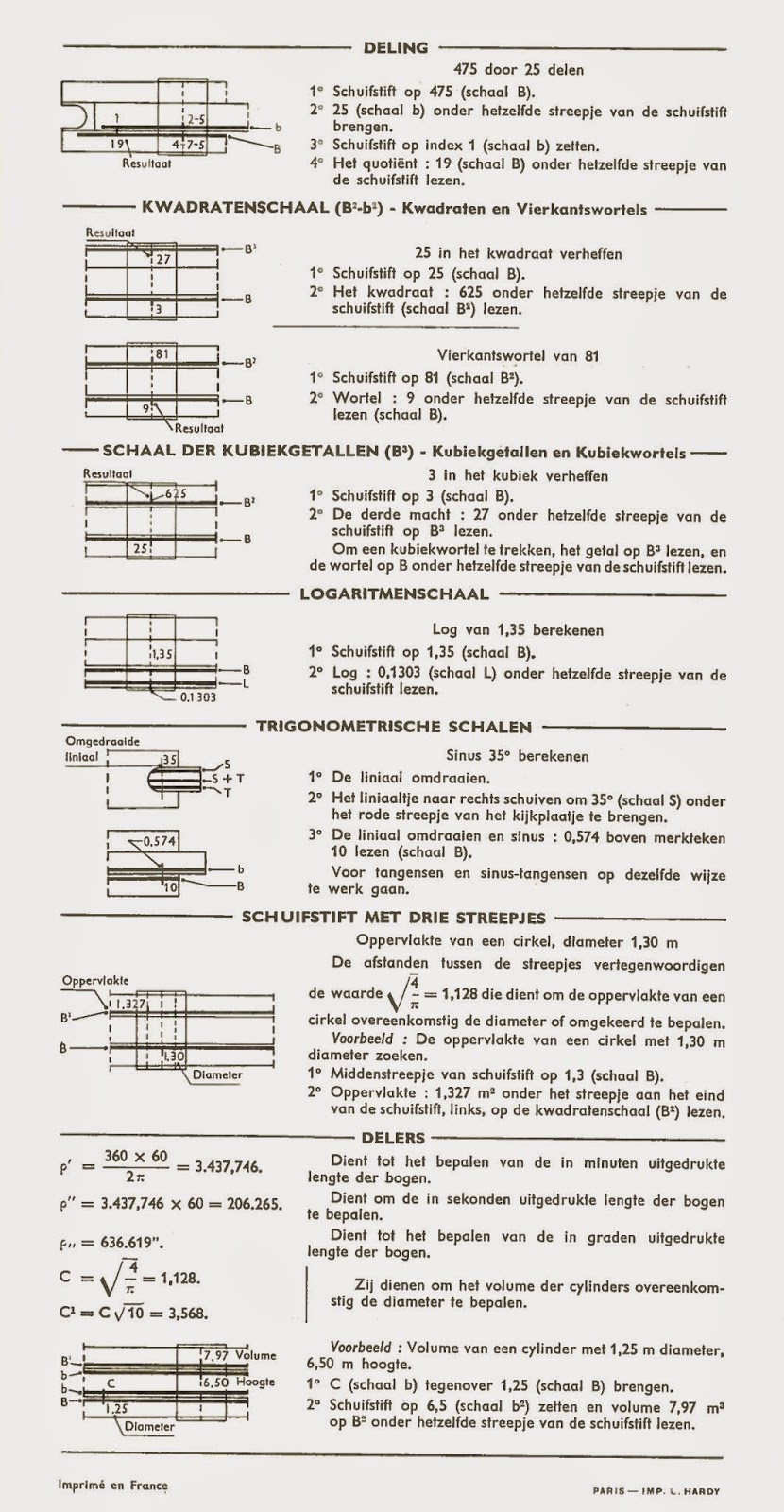 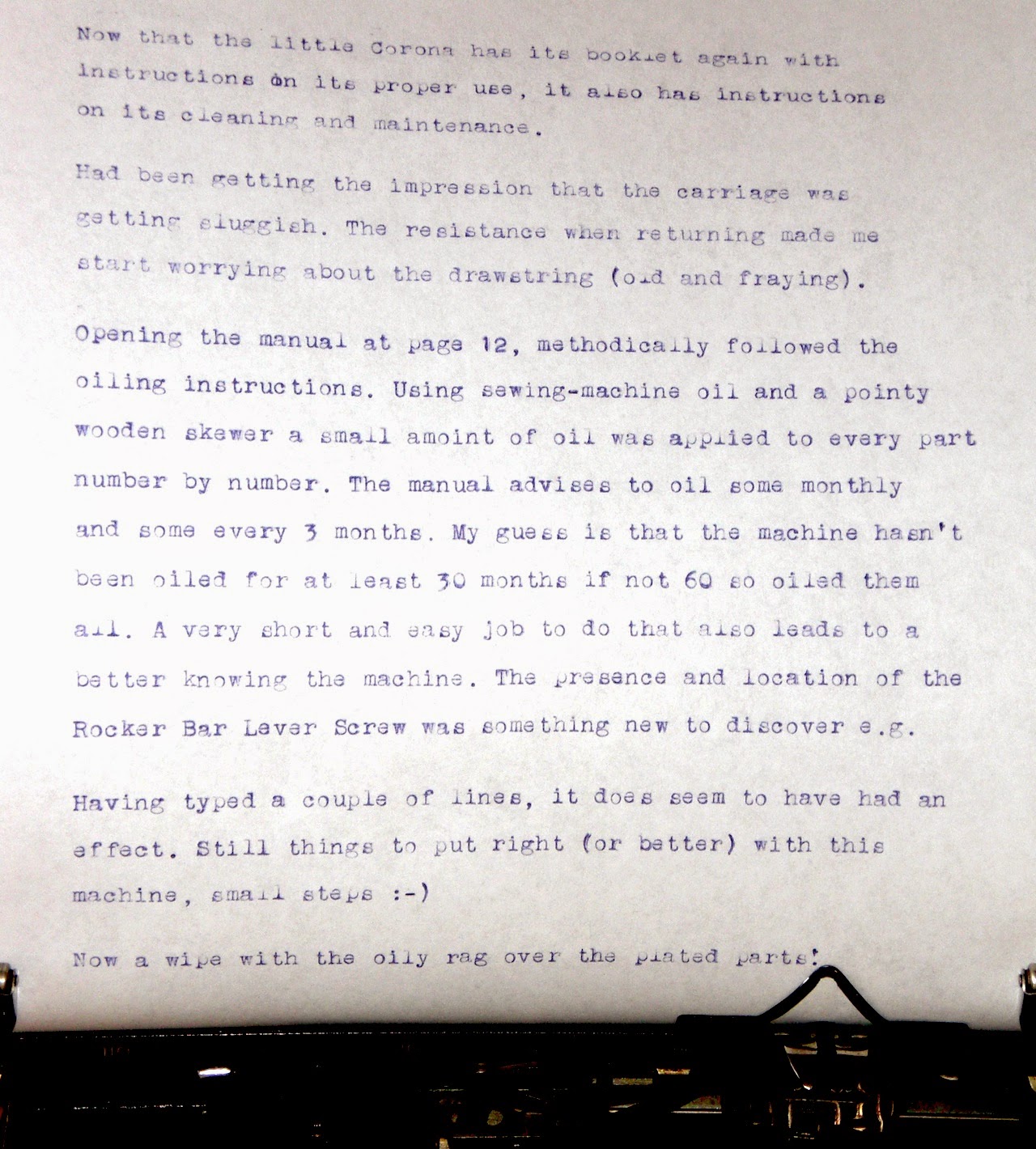 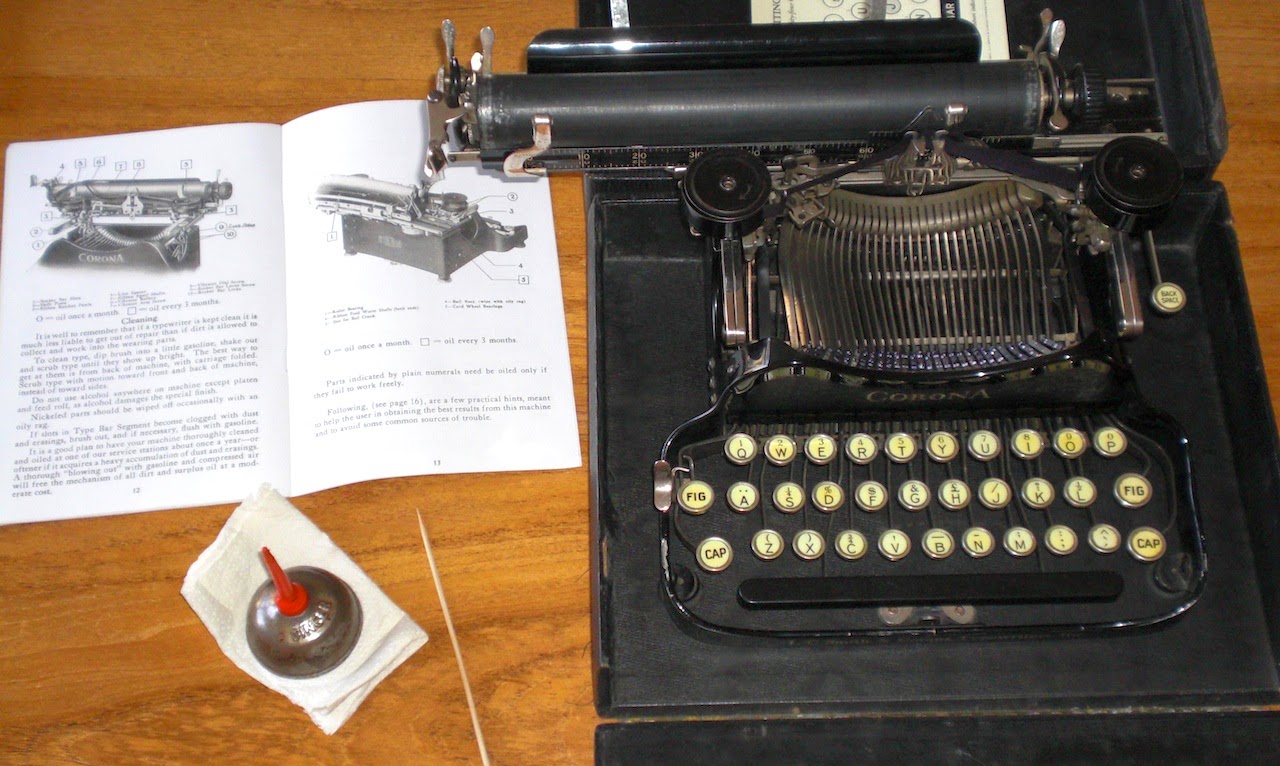 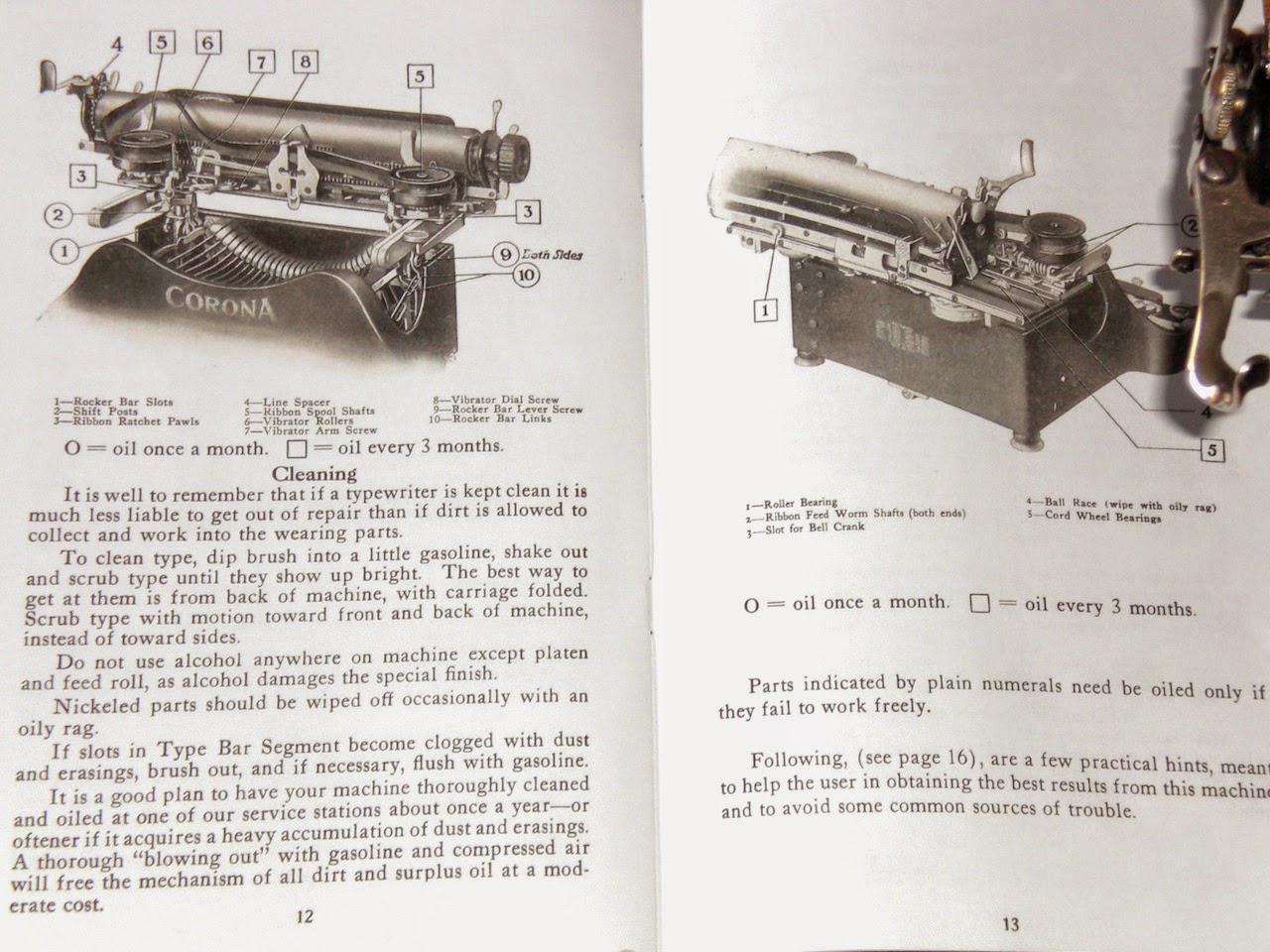 Actually an easy and relaxing little task to do. Most time is taken by locating the part from the diagram on the machine itself. Did have a positive impact on the smoothness of the carriage.

(The manual for this model of the Corona 3 folding typewriter is online on the Archive.)

Posted by RobertG at 2:00 AM No comments: 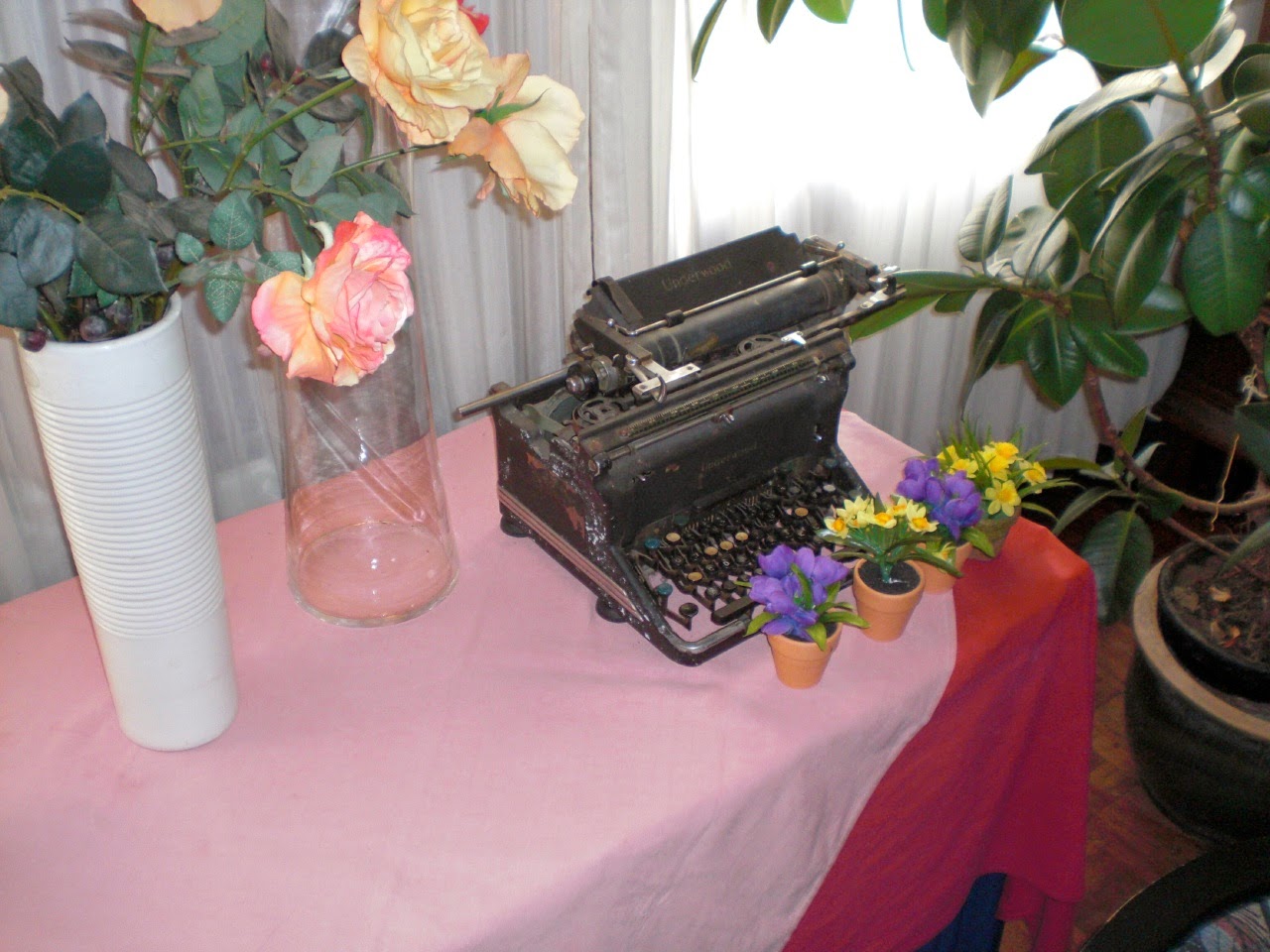 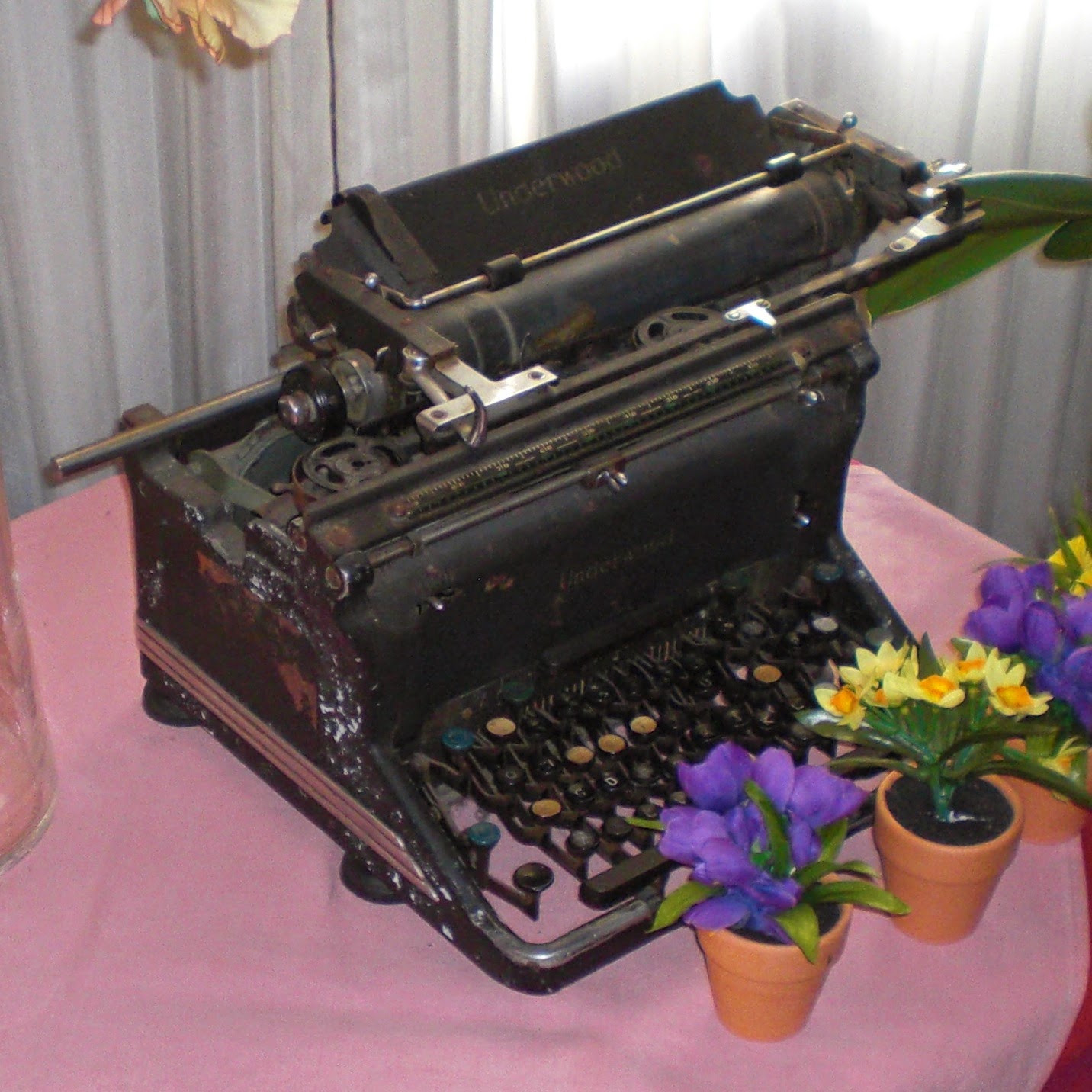