From looking again at an old record sleeve

Just noticed that the stylised tuning fork on a record sleeve is actually a very exact picture of the genuine article. Even the tapered handle is correctly drawn. 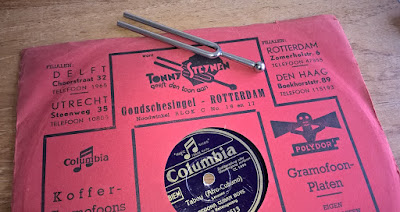 This made me have another, closer look at the sleeve. The sleeve has an overall 1930s feel to it, and fairly conservative in its design as well.

However this particular sleeve can be dated to probably the early 1940s. The address for their Rotterdam store is located at the Goudschesingel street, but then is noted to be in the "Temporaryshop" block C. These "Noodwinkels" were structures built quickly to provide temporary, emergency shops after the infamous bombing in May 1940. 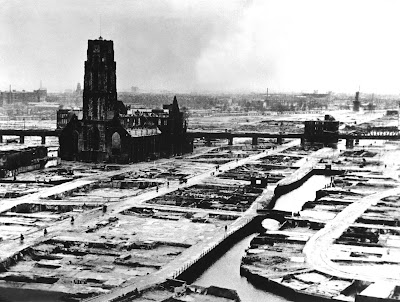 Very quickly after the complete destruction of the city centre, plans were published already in June to erect a first series of 750 temporary shops. So unexpectedly a bit of history (of not all that long ago) from a simple address line on an old record sleeve.
Posted by RobertG at 3:01 AM 2 comments: