With old typewriters, the escapement may sometimes skip a space - the age of the mechanism I've always thought. Hence with some surprise I noticed what I think is a machine 'skip', in a proper document too. (Top line.) 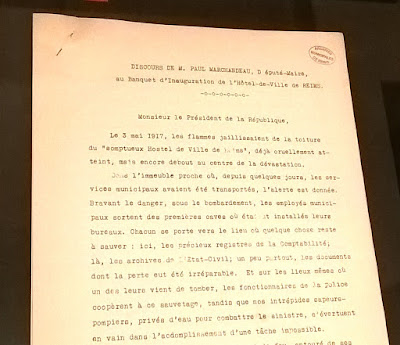 This would surely have been typed out by the secretarial staff of the mayor's office, in any case by a professional typist. It may not have been noticed at the time, or too minor/late to justify a re-type. It is in the first line, so maybe the typist was still getting into the 'rhythm' of the machine - or it was an old machine. There are no obvious typo's in the actual text, but the year '1917' is remarkable for using the capital 'I' instead of the lower case 'l'.

This page was typed in 1928. The document from city archives is the transcript of the speech of the deputy mayor at the dinner held for the festive opening of the rebuilt town hall of Reims.

Seeing evidence of contemporary typewriter 'hiccups' makes it a bit more 'normal' when an 80 year old machine will occasionally skip a space today - it's just part of how the machine works :-)
Posted by RobertG at 7:44 AM 2 comments:

Having just read of the rich seam of typewriters that may be spotted on a San Fransisco area safari, I'm prompted to share at least one machine that I keep encountering in my occasional visits to the local thrifts.

This machine is priced at a very reasonable EUR 7.50 and has been for months. 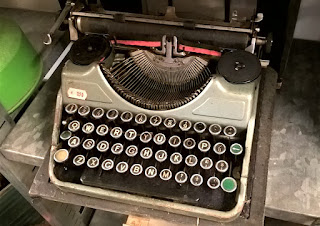 It's been sitting on this shelf, next to a fifties' Remington standard with damaged paintwork. The typewriter does still function, carriage moves and it seems to type fine. The ribbon looks a very recent replacement. The case looks worn and is probably moldy. There is absolutely no visible marking or decals on the machine - the paper table is the one part that is missing from the typewriter.

It took a little bit of digging around the internet and especially looking at images in The Database to identify this as almost certainly a Continental 'Klein-Conti' or Wanderer 340. This is a fairly common machine here and is even more common in Germany. The color of the paintjob is unusual, to me suggestive of it being a post-war specimen. (Did not find the serial number.)

Even though the price could be fine merely for a new ribbon, did not get the machine. Apart from it being incomplete and 'too modern' for my liking, there is a fairly strict stop here on new typewriters. So no new project typewriters. :-)
Posted by RobertG at 11:18 AM 3 comments:

Occasionally picking up a nice sliderule (that is not priced through the roof), recently acquired this compact Mannheim sliderule. In the images it looked a clean and complete early 20th century sliderule.  It came complete with the original cardboard sleeve, all were indeed still in very decent condition. 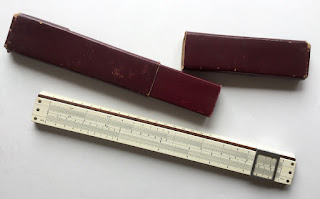 The markings in the well of the sliderule confirm it is a Dennert & Pape manufactured sliderule. With the original cursor, aluminium framed.

The year-number on early D&P rules was marked in the well at the left-most end - this particular rule marked '07' was manufactured in 1907. That makes it 111 year old today in 2018. 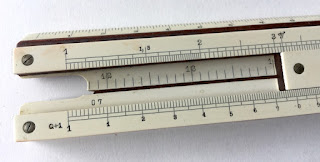 The rule was well looked after and stored in reasonable conditions over that century, it is still fairly straight and the alignment of the scales is still great. Even though the sliderule has been obsolete for decades, this specimen is still fully usable. (And provided it's stored well, likely to last centuries more.)

What didn't last so great, was the label on the bottom of the rule with concise instructions on its use. The metal spring-plate that D&P included to provide the tension on the rule has corroded. Even though the rust has not impaired the functioning of the spring much, the label definitely shows its age and is partially gone/illegible. 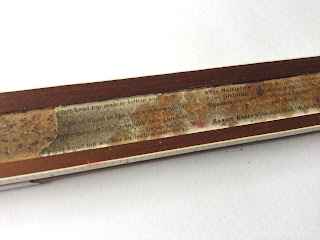 The English label does show that this rule was likely manufactured for export to Britain originally.

Again on the A and B scales there is an extra marking around 1143 or so. This marking was also on another 1908 Dennert & Pape rule and also on this 1910 specimen shown at the online Sliderulemuseum. Was this done for the British market only? 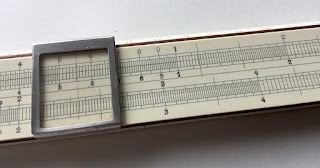 Still puzzled by the meaning of this extra marking.

Several weeks after getting this antique, the instruction booklet for these rules popped up on a German online-auction-site. So purchased the instructions for what is probably an excessive price for a thin, worn piece of old paper - but at EUR 10,- an entirely affordable excess! 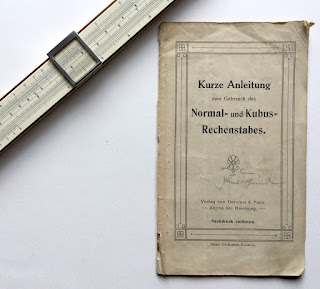 The booklet contains no date or printer codes, but it probably dates from around 1910. It references the 'cubic' sliderule, treating it as a special. This 'cubic' rule section reads as being for the 'Rietz' scale arrangement, patented by Max Rietz in 1902. The overall 'look and feel' places the booklet unlikely to be later than 1920. By then also the 'Rietz' sliderule was overtaking the 'Mannheim' rule as the standard scale arrangement on continental/German sliderules.

So the gaps in the instruction label on the bottom of the sliderule have been filled in with the full instruction booklet that originally would have been with the sliderule (German market, at least). Disappointingly however, no mention of any special marking on the A and B scale - so that still is a mystery.

For the curious and/or owners of a D&P early 20th century sliderule, the 'short manual' on the use of the normal and the 'cubic' sliderule is now available on the Archive.