A mahogany and celluloid Keuffel & Esser slide rule. A 'Polyphase', type N4053-3. Similar to the Rietz system, but with small differences on arrangement and how the S and T scales are done. The S is linked to the A scale rather than D scale and the mantissa scale L is at the back of the slide instead of the front. 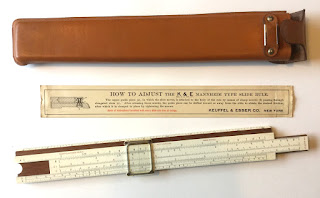 Complete with its 4053-3S leather protective case and including the instructions on adjusting. This adjustment mechanism with screws is what the patent number on the stock is about. The metal strip protecting the edges of the strap has US patent number 2,000,337 stamped on the edge. Now without that hint, would never have spotted the ingenious locking strips for the tongue underneath. 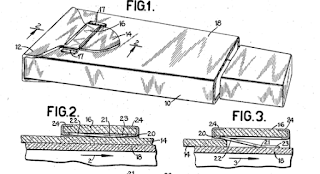 These K&E are probably very common across the pond, but relatively rare here. Curious for this one and it looked clean in the pictures, so went for it. It indeed is clean, however the plastic slideblocks of the cursor are cracked and the spring very rusty. This seems to be a standard fault with these, the celluloid disintegrates with time. The lower slideblock was also warped a bit, skewing the cursor a little. The cursor screws are corroded and won't budge, but some shimming with strips of thin adhesive paper label inside the slideblock brought it back perpendicular to the scales.

The top cursor slideblock also notes it is patented. Reading the claims, patent protection for rounded corners also happened back in the thirties. Another unexpected item was that the sine scale is half a millimeter or so off. The celluloid window for the S&T scale on the slider is a bit loose or perhaps warped. Other than all that; it is still straight and serviceable!

It's rather short and light, compared to e.g. some German slide rules. The cursor even partially slides off the ends at the index positions. Single line cursor also and no C markings. Clean and compact.

From online resources, the serial number puts this slide rule as produced in 1943. (The amount of resources online on sliderules is astonishing, by the way. On the internet, there really is no subject so 'niche' that it doesn't have its collectors society.) 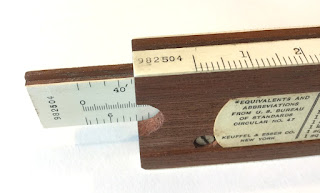 How does a '43 slide rule end up in Holland? Come to that, hadn't realized that slide rules continued to be produced throughout the war - essential tools. (Not consuming too much important raw materials either, may have counted as well.)

Did this little engineering tool come over with allied forces? Or was it perhaps part of Marshall plan items sent over? Or was it just simply exported and sold here after the war from stock. (The here more common makes were not producing much right then, I suspect...)

Analog technology and again a snippet of history :)
Posted by RobertG at 7:48 AM 1 comment: 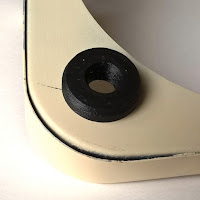 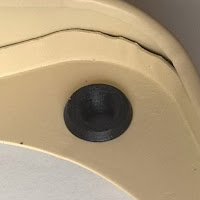 (Another small mystery that remains is why the '29 backplate has a small hole at the rear-left of the machine. Surely the Remington Portable #2 doesn't have a shift-release prod?)
Posted by RobertG at 6:01 AM 6 comments: 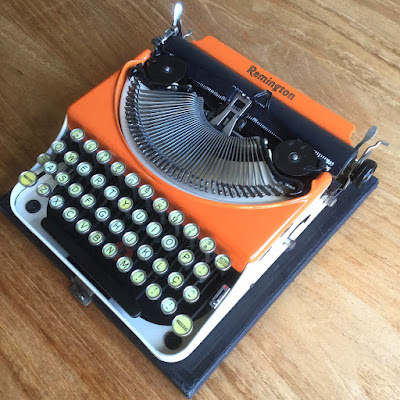 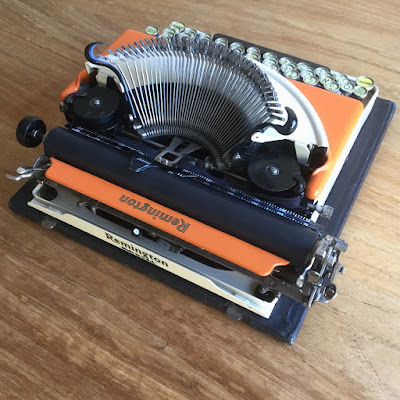 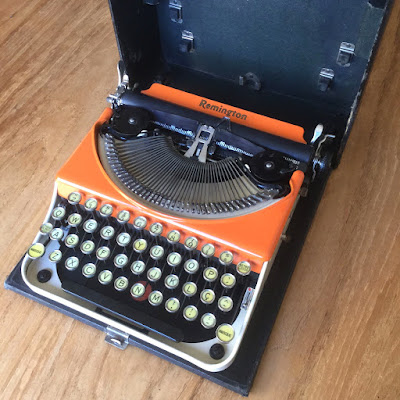 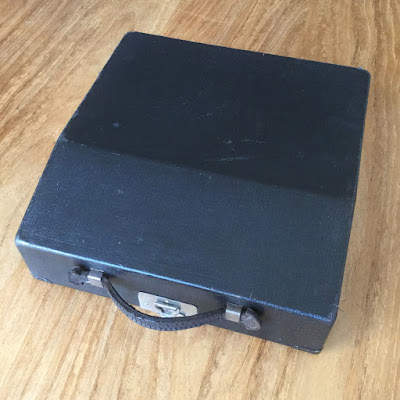 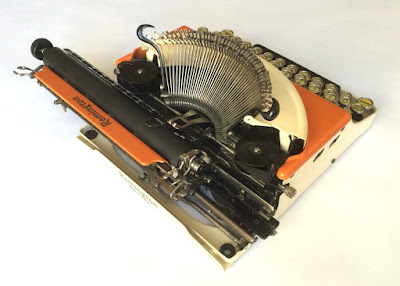 Parts machine, a #2 with early features

This is a parts machine. It was advertised as non-working and the seller delivered exactly as described :) 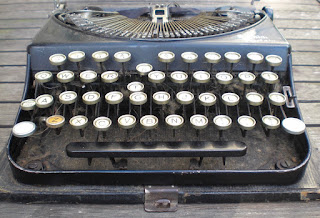 This British assembled Remington Portable typewriter NV700212 has been dealt several blows, deforming the typebar lifting mechanism and the protecting hooks so that it won't move at all. It also had repairs done over time, with some keycaps getting new rings and losing its right carriage adjustment parts. Today it is very dilapidated, dirty and not working - designated a parts machine.

For a 1927 machine it has a few uncommonly 'early' Remington Portable #1 features. It still has the narrow disk-like ribbon reversing knobs and the old style ribbon spool locks. Also no bulge in the ribbon color-set slot, this one is still straight. The top-plate also is of a different design, looks much more like the older #1 design with the flat endings. However it does have room for the #2 hooks and mechanism.

There was clearly a lot of variation on details with these machines. The change from #1 to the #2 is a bit diffuse, with many new design elements gradually being implemented (and reverting also). Maybe especially so with production at their international factories. 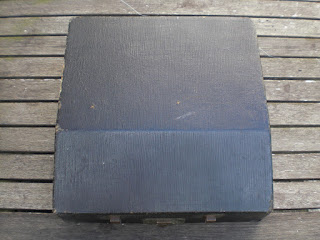 The carrying case still is quite decent. That will come in handy as a replacement for a moldy case-lid. Also the platen looks to be in very good condition. 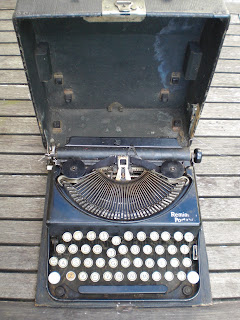 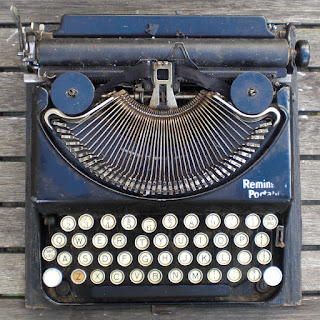 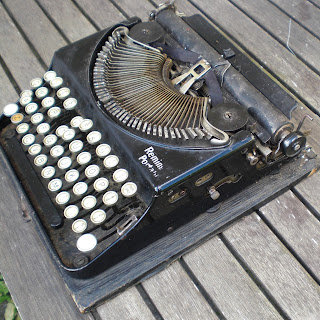 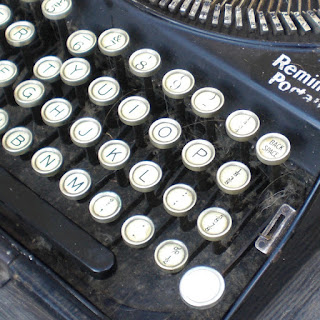 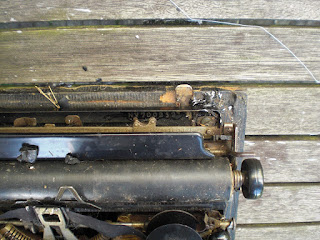 An unexpected nice touch. A label stuck to the inside of the case lid with 'the moving finger' poem by Omar Khayam. (Well, the English translation...) 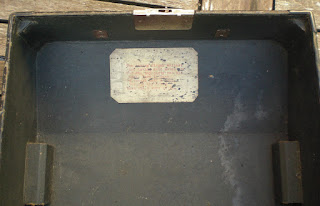 Apt perhaps; the moving finger certainly did write on this little machine.

Markings on ruler and line-guide

The ruler on older portable typewriters is generally a stamped bit of metal with embossed markings. The markings are usually coloured in with a contrast colour, white lettering on a black ruler. Now this lettering today is often faded, dirty, rusty or partially flaked off.

How to revive or re-apply the contrast colour is very helpfully explained in the book "Algemeines Anleitungsbuch Für Schreibmaschinenreparateure". A general manual for typewriter-repairers is exactly what we need here! Though the book is oddly low on pictures, it is very rich in useful advice.

Must have been a very useful book back then in '26 and it is so again almost a century later. Many thanks to Georg Sommeregger for scanning and sharing this!

On page 59 the improving of rulers is explained. A combination of zinc-white and wax is recommended, heating the ruler a bit and then rubbing it on. A mix of zinc-white and wax, now that would be a white wax-crayon. Heating the ruler a bit (~70° C) with the crayon, this indeed rubs nicely in the embossed markings. The excess wipes off clean, leaving the wax solid in the markings as it cools down

The ruler of the Remington portable typewriter being refurbished was unreadably rusty, so was totally stripped clean and repainted. Now also with new bright white lettering from white wax-crayon. 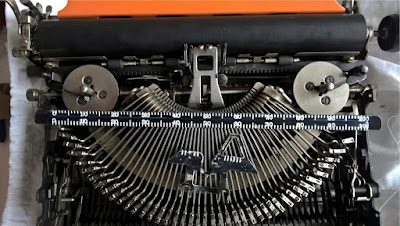 Found that there's a difference in quality of the wax crayons; the 'cheap' items don't contain much (or any) wax. They're probably purely synthetic. These don't work at all for this. Proper wax crayons however work well and soften and melt as you'd expect wax to do. (Used Caran d'Ache brand wax-crayon on this ruler.)
Posted by RobertG at 1:23 AM 5 comments: