Something different;  came across this article on how to build a small monoplane. 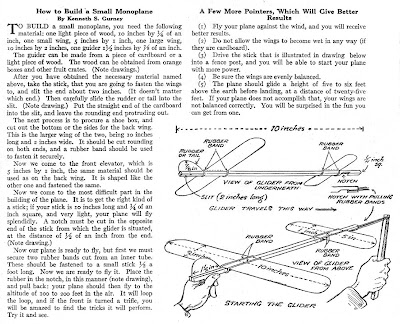 Curious and it seemed simple, so with some cardboard and a bit of wood something to try. 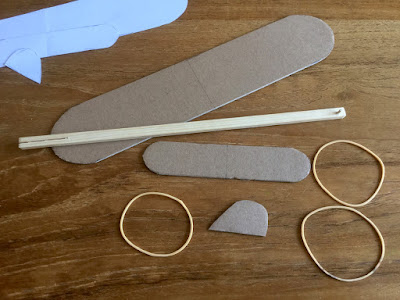 The small monoplane is easy to build and assemble and actually flies very well. The stick was a bit thin so instead of filing a notch a small length of toothpick was glued in a drilled hole. 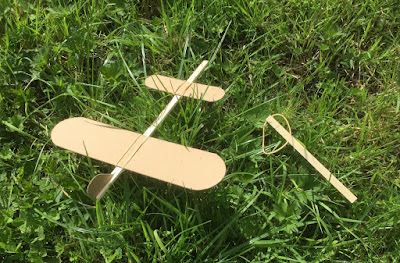 Having the rubber band on a launch stick as in the article is actually helpful. Especially for the kids. It is easier to launch and less chance of launching the stick straight onto their thumb (‘Ow!’).

One added modification was to make quarter inch pencil markings on the stick. This makes it easier to experiment with the position of the wings on the stick (and restore after a crash-landing). The positions as drawn by Kenneth S. Gurney actually do work best - he probably experimented a bit as well :-)

Nice one for the summer break!
Posted by RobertG at 3:09 AM No comments:

Before and after pictures (polish and India ink)

Having tinkered a fair bit with the Remington Portable #2 typewriter, had a look at the one image of the original online listing that I saved. On the left 'before' picture of the seller's listing, the 'after' picture now shows the touched-up machine. Still definitely an old and worn machine, but 'cleaner'. 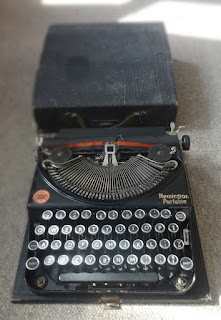 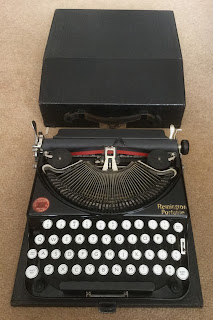 The case had the obvious insect and arachnid droppings of course (i.e. the 'white paint splatter'). These spots can be individually scraped or chiseled off with a sharp tool like a sharp screwdriver. Only then is the black shoe polish applied to revive the Rexine (or Leatherette). This adds some black again and also softens the brittle covering with new wax. If done the other way around, these spots will still be visible.

The front of the frame had some bare spots and rust. These were carefully rubbed smooth, followed by painting black with India ink using a small, soft brush. This gives a deep black and a modest shine that matches the black lacquer reasonably well. (Spools were more badly rusted than was obvious from the listing image, but these were easily sanded and re-painted.) A permanent marker pen can also work, but especially for larger surfaces this can get stripey. Also the black ink (dye) in these pens often have a blue or brown hue, whereas the pigment (soot) of India ink is quite black. 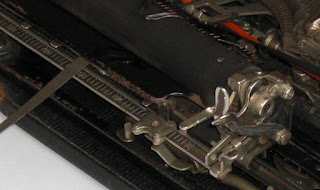 Rust on edge of paper table 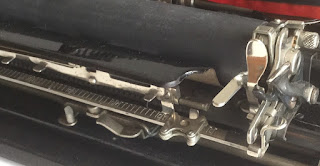 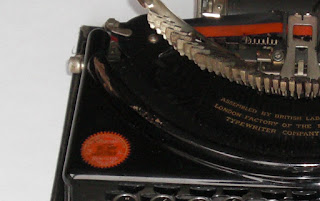 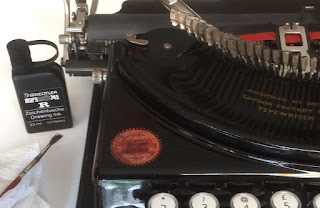 Still rusty, but much less noticeable

Being careful with the worn and corroded decals, some light touching up was done on the wordmark. Doesn't show very well in photo's, but can be seen a bit on the 'o' in portable. Using a gold marker pen a very small amount of new gold ink is put on a work patch. Then using a frayed toothpick this is spread carefully to make flat and match the overall texture of the decal. Again, the decal is still old and worn, but there's a just little bit more of it now.

The machine had much more mechanical tinkering done to it, but just these basic cosmetic items can make a lot of difference to a machine's overall appearance.

(And make it much more acceptable to have around :-)
Posted by RobertG at 4:58 AM 8 comments: