This is something every owner of an older Burroughs calculator or adding machine will want.

The Burroughs company did not want users to poke around the internals of their adding machines. To discourage such 'tinkering', the cases were locked and needed a 'B-key' to unlock. It's possible to jimmy the lock (a thin blade between base and cover to push the latch away) or sometimes just lots of jiggling to get the cover off - but with a B-key it becomes so much easier :-)

The dimensions of these keys are fortunately findable in the hive-library that is the internet. 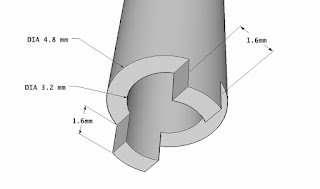 Rummaging in the collection of old-keys, a little key with hollow shaft and an outside diameter of just under 5mm was found. This was then filed/sawed to create the pronged B-Key; the dimensions aren't too critical - the prongs just have to fit in the cut-outs of the latch. The inside diameter of the shaft does need to be large enough to fit around the central stem in the lock of course, so drilled out to 3.2 mm. 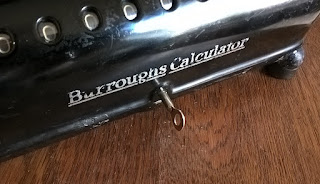 To remove the cover of e.g. this Burroughs Class 5 calculator then becomes simple. Merely undoing the two thumbscrews at the rear, pulling out the crank, turning the key and lift off.

On the inside of the case-cover, the hooked latch can be seen that is rotated by the key. 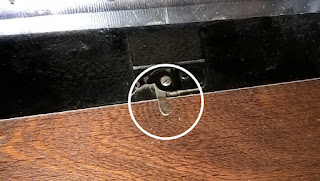 And the pin in the base of the machine that is grabbed by the hook. 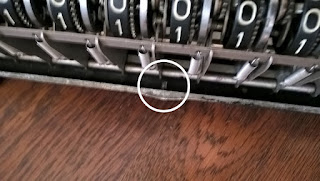 Triumph of the XX century - eclipses every calculating machine! 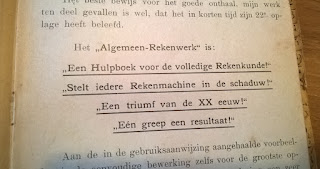 The general calculator is:

An aid for the entirety of calculus!

A triumph of the 20th century!

One look one answer!

This is a Dutch printing of "The Complete Calculating Book" by Jean Bergmann of Berlin. (Jean Bergmann's "Universal-Rechner") The whole preface is filled with hyperbole and confidence in the utility and magnificence of this book as a calculating aid for business and commerce. 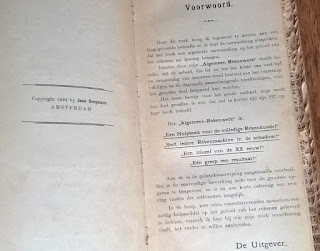 As far as can be determined it was first published in Berlin around 1917, with translations in several languages. The German editions throughout the 1920s are more common, but this is the 1924 Dutch edition (22nd printing) - published in Amsterdam. 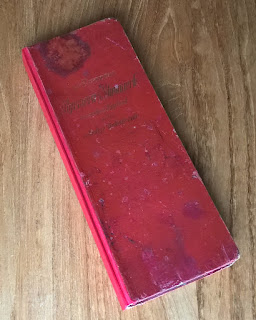 An online 'calculatory' impulse-buy, it was in rather a shocking state. The spine was gone and the boards only loosely attached. Cosmetically, some water-damage and a lot of paint splattered all over the boards. On the book's back there was a clear ring-mark of a paint-can having been set on it. Silverfish have feasted on the exposed tabs of the pages, erasing several of the page-numbers. Overall it looked like something best kept in a shed (which is probably where it had been kept).

The book was 'patched up' a bit. The thicker paint patches could be mostly broken away with a scalpel, the remaining patches were scraped away. Combined with a scrubbing with soapy water, much general dirt and grime could be taken off.  To make the blotches of paint and the scraping-damage less visible, these were touched-up with various shades of red watercolour paint. With red ink also the large drip-damage stain on the top of the front board was made less glaring. 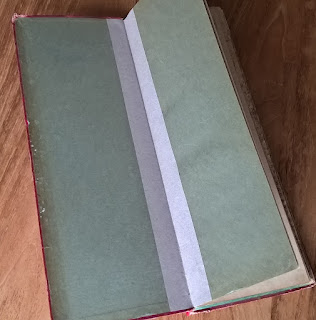 The boards were re-attached to the insides, re-enforced with strips of paper. A new spine was made from 2mm paperboard covered with red 'buckram' paper and attached to the boards with cotton band. As is often the case; after finishing the job you know how it should have been done. The spine should e.g. be made a few mm narrower than the book's thickness for proper opening. That's for a next time - this'll have to keep for a while.

As a final step, the whole outside was waxed - this evens out the touched-up spots with the rest of the boards and gives it all a bit of protection.

The only pages that would have needed translating are the instruction pages at the front of the book. For multiplications and division the book contains look-up tables to quickly arrive at the answer. For basic multiplications of money (5 ct increments) by 1 through 99 the answer can be looked up, for anything beyond that, more steps are needed. The user is expected to perform addition manually. (In Germany the book was sometimes sold with a slide-adder included.) It all makes sense, but is not always quite so simple perhaps. 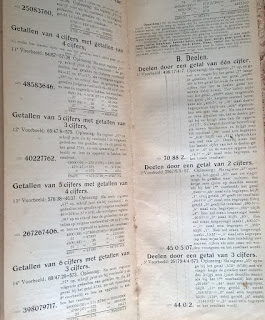 The few pages of instructions are followed by pages filled with the answers to multiplications. Every pair of pages contains a 'decade' at 5 cent increments multiplied by 1 - 99 plus an additional table of 17 common fractions. 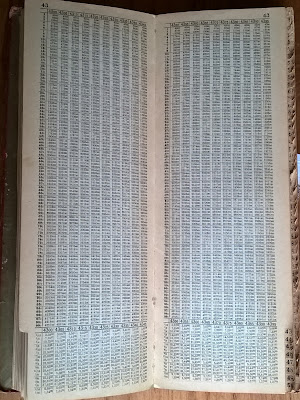 Every tabbed pair of pages then has 20 columns with 116 answers, the answer-section thus contains 99 pairs of pages, so 229,680 answers. An additional section at the back of interest payments of 44 percentage-columns with 113 rates calculated for 360 days and another 44 columns at 365 days, makes another set of 9,944 answers. To print this book, a total of 239,624 numbers had to be calculated and correctly set for printing. 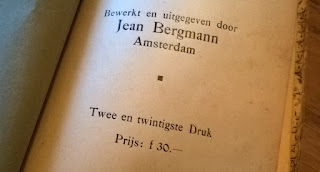 The purchase price of Hfl 30,- seems quite steep. Then again, it is almost a quarter of a million answers at a thousandth of a cent apiece.

It is difficult to genuinely understand values and pricing of a century ago, but it was certainly not a trivial purchase. It was however a fraction of the cost of a calculator. As comparison prices from around 1920 in Holland; an Underwood 5 typewriter would have cost Hfl 325,- and a Comptometer calculator was offered at Hfl 687,50.

Relating prices to modern value-perception is hard. As an extra context, a loaf of bread was around Hfl 0,16 and an egg about Hfl 0,05. It is a 'wrong' comparison, but expressed in loaves of bread, the book cost ~188 loaves, today's bread-equivalent price then in Euro's is, say, EUR 217,50. The Underwood 5 today, via the bread-reference, would cost EUR 2356,- and a Comptometer double that. (Dutch price references from the CBS.)

Smaller firms or tradesmen who would not have been able to justify the expense of a calculator would have been able to afford this book. To what extent the advantage of being able to look up multiplications in this book justified that expense is of course debatable - as it would have been back then.
Nevertheless, this type of book was one of the available figuring-tools a century ago - so a fitting addition to any small collection of early 20th century slide-rules, adders and calculators :-)
Posted by RobertG at 1:23 AM No comments: