Hammond - With ribbon and first work

Still much to adjust on the Hammond Multiplex, but the machine produced its first, tentative writing in probably decades: 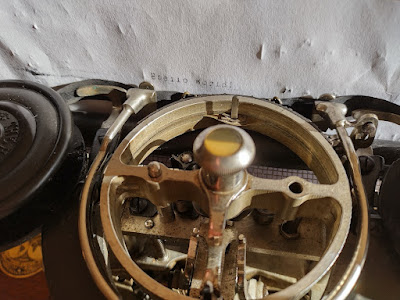 To get there, the ribbon spools were made functional again. Both spools have one good side without damage and one side that was broken. The one spool with a large chunk missing, was given a functional-fix. From several layers of paperboard, a segment was built-up and cut to fit exactly the edge of the damage. When painted black and with the spool mounted with the fix on the bottom, it is not really noticeable (see above picture :-) and it makes the spool again take-up ribbon. (With a shard missing, the ribbon starts to just wind around the capstan underneath the spool...). 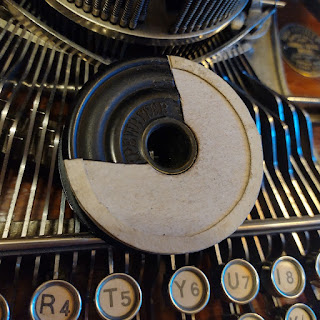 The old 10mm ribbon was re-inked with some water-based (glycerol) stamp-pad ink. Because the Hammond type is made of hard-rubber, did not quite dare to apply oil-based inks. The ribbon is clamped on the brass centre of the spools with a strong spring-steel clip. 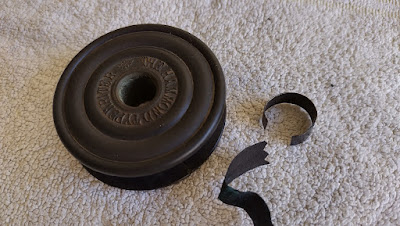 The original ribbon may need to be replaced in the end - having been twisted and stretched as much as it has, it does not feed well over the ribbon stand-offs.

The first attempt at typing created completely illegible text. From closely watching the mechanism, it could be seen that the hammer was triggered just before the shuttle-vane had reached its stop-position against a pin. This created the type-impression when the shuttle was still racing to its position - 'motion blur'. The Hammond typewriter can of course be adjusted - from a scan of the instruction manual for a Hammond 2 the correct adjusting screw was identified - it is screw 12 in the drawing. 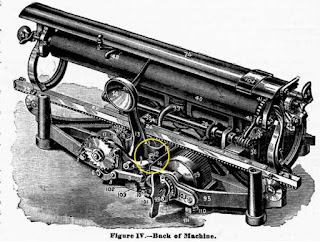 There are actually rather a lot of adjustments possible on a Hammond, so very glad this was explained in the manual. (Also by the way remarkable how similar the Hammond Multiplex still was/is to the original hammond of the 1880s.) On this Multiplex, the screw 12 was jammed solid, but applying 'over-size tools' managed to persuade the lock-nut to finally free up. 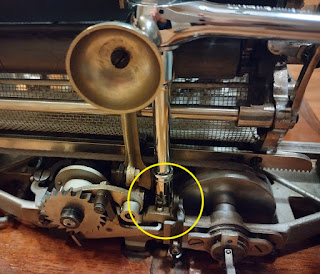 By adjusting this screw '12' up and down, the trip of the hammer can be made to be later or earlier during a key-press. With some trial and error, it was set at a point to trip the hammer just at the instant the shuttle-vane reaches its stop-pin. There is a sweet spot to aim for (as there so often is of course).

The machine now starts to type - still much adjusting to be done, e.g. higher hammer-pressure versus draw-band tension, heights etc.

One other thing that was done to revive the Multiplex, was to give it newly manufactured rubber 'socks' and new felt soles. The 3D-printed socks are higher than they should be, probably made a reading-error of 5mm on height somewhere. Despite that, they fit and look acceptable. More importantly, the mechanism now again has the required clearance from the wooden baseplate to be able to function correctly. 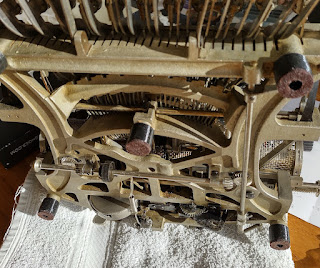 Having gone this far in making the machine look nice, even the rusty mounting-screws were spruced-up. With rust sanded-off, blackened with permanent marker and a rub with petroleum jelly these screws are fit for this Hammond again. Continues to amaze (me at least) how well old, rusty parts can be brought back.

So, progress on the Multiplex - an amazing typewriter; still much to be adjusted, but looking very impressive already :-) 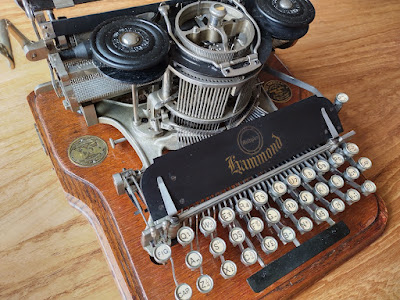 Posted by RobertG at 6:13 AM No comments: