In those cases where a ribbon dries out rather than wears out. With 'attic-find' machines these days, that is likely the case. The remedy then; a very little light machine oil. 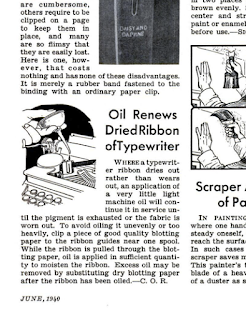 Applying WD40 will also do, being 'oil' yet with a very varied mixture of weights. The lighter fractions may help with the moistening throughout. After the spraying technique with WD40, it does however take some time for it all to even out.

Regular machine oil should work fine as well and is less mess. With this method the ribbon doesn't need to be totally unwound from the spools. It can even be done in the machine. The blotting paper trick helps to even things out.

So replicating this sound advice as given in the pages of Popular Science... 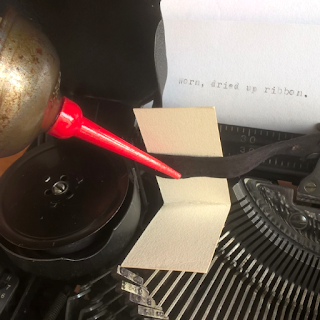 Pressing the blotting card gently onto the ribbon (or clip) and winding the ribbon back and forth a couple of times works to even the oil out. There's just that little bit of a shine on the ribbon after the oiling. Probably the oil is still mostly on the outsides of the ribbon and will need some time to fully moisten and release the dried-up ink. 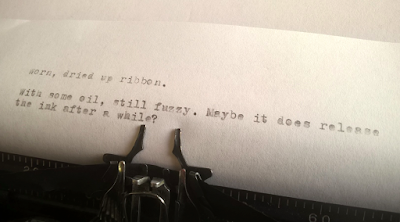 Posted by RobertG at 4:44 AM No comments:

The machine looked derelict which was good, because this was purchased for the case. Had been wanting one to replace the case of the burgundy Speedline Sterling that was eaten by woodworms. (That case was so wormholed, it was almost see-through.) The supply of Corona Speedlines has dried up a bit here. Two years ago there would always be one or two listed online. This was however the first Speedline I'd spotted in a while. That it looked in bad shape was a bonus then - would not feel bad about taking the case and designating it a parts machine for the glossy Speedline. 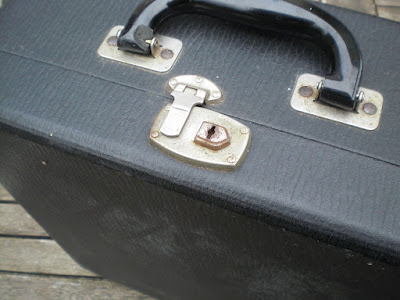 The case overall is in good shape, but does miss part of a back hinge and has a chipped handle. Looks all replaceable/repairable though. Still very well suited to its task of protecting a Speedline in transport or storage. The dull grey Corona Standard Speedline inside is less derelict than it looked to be. 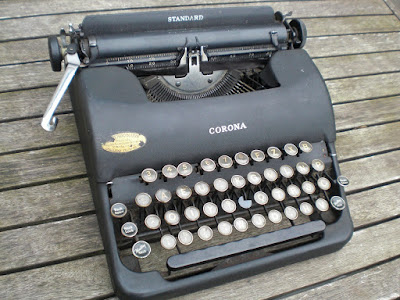 The machine itself has an interesting keyboard layout. This machine looks like it hasn't got all its marbles in a row and is missing one to boot! Looks like somebody creatively shuffled all the keys around. The letter keys clearly are later replacement keys, a modification to what probably originally was a standard US keyboard layout. 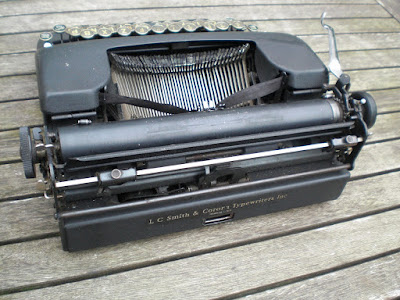 Compared to a 1938 glossy Speedline, it is rather austere and severe in appearance. No stripe on the cover, much of the originally glossy metal parts are simply black. Has a rock-hard platen and no linespacing ratchet, but still works otherwise. The threading of the ribbon suggests some neglect and 'uninformed use'. Again austere, no 'Floating Shift' logo on the strikeplate.

The serial number was again a surprise. It confirms this as a Standard, but the number 3C300146 would put this as manufactured towards the end of 1942. (Thank you Typewriterdatabase!) By that time war production was in effect with the few typewriters then being made new intended for government (military) use only. 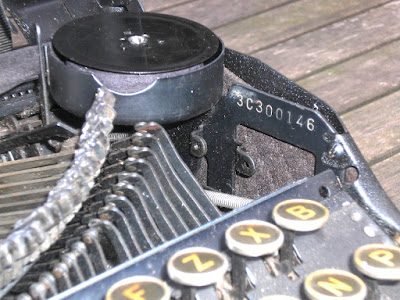 That could all actually tie in well with the confusingly charactered keyboard. This is not a joke (probably), but it is a Belgian keyboard layout. Not found any primary sources for this, but this is referred to as the 'Valley' layout. Created in 1890 for speed (yes), this would have been an archaic and rare layout by the late forties I suspect.

Being made in 1942, this likely was used by American forces. Probably then made its way to Belgium in '44 or '45.  Then it somehow stayed behind in Belgium and got a Belgian keyboard layout. From the dealer label on the ribbon cover this was possibly done by Richard Boudin, Office Supplies and Equipment at 70 Rue Du Grand Central, Charleroi.

Perhaps not a parts machine...

First a clean-up and maybe then have a go at repairing this. To replace the ill-fitting replacement keys I think I can manufacture new plastic key inserts. Now to go hunt for a Corona key ring.  :-)

A more modern sliderule made in 'Astrolon' plastic (polyvinylchloride). According to the numbers 471 on the back it was made in 1947 in batch 1 by Aristo (Dennert & Pape). A regular 10 inch 'system Rietz' sliderule. 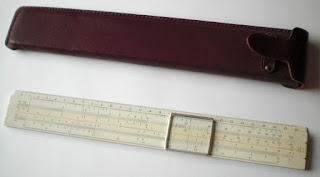 Unlike later extruded models, this is milled from sheet material. Very straight and solid stock. 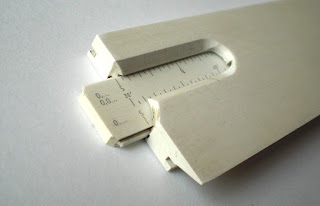 Have had this one since probably the mid eighties - have some memory of buying for 50 cents at a jumble sale. They'd only just been made properly obsolete then, so would have been ending up at the back of drawers. Or at jumble-sales :)

Pretty much a common, standard 'Rietz' sliderule that is surprisingly heavy and solid - feels 'precise'.
Posted by RobertG at 12:17 PM 4 comments:

In a dark brown leather sleeve, a Mannheim sliderule made in 1908 by Dennert & Pape of Altona.

Made of mahogany with celluloid scales. A very complete Mannheim with A[B C]D scales and S, T and a mantissa L on the back of the slide. Some yellowing of course, but overall in decent condition. It has a metal plate at the back over its length to keep the two halves of the stock under tension.

The German patent number 126499 of 1901 for this construction is engraved on the inside well of the stock that also has a ruler extension. Engraved in the well are the small digits that indicate the year of manufacture - 08. This particular rule was made with both a cm and inch ruler and the extender in the well in inches. Likely made for export to England. 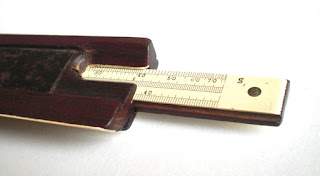 The D&P logo is stamped on the cursor; glass window, single line. One detail is still a bit of a mystery; the AB scales have an extra marking with a dot at around 1143. This could have been added later, but it looks very clean as if factory made. Not yet caught on to what that number is... 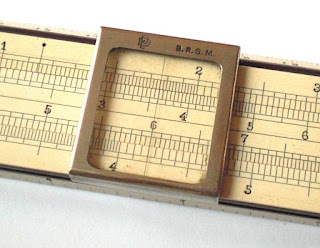 Over a century old; that would make it a proper antique! - nevertheless still works fine.

Anybody with any hints that would shed light on the marking for 1143 or thereabouts, please do share :)
Posted by RobertG at 2:13 AM 2 comments: