A fixed part for the E6 motor

Continuing the 'repair shop' treatment of the old Meccano electric motor; now the fixing-up of damaged parts. The base plate of the switch was damaged, with all four mounting pins broken off and a corner chipped. Not sure what the 'plastic' part is made of, possibly bakelite - notable is that it wasn't fully moulded, but at least partly machined. The studs were not moulded protrusions, but separate pegs that were inserted in drilled holes. Edit: or a previous owner tried to repair broken-off studs by drilling holes to fix with screws.

The pegs form studs that hold the switch in place when sandwiched between the motor side-plates. The holes in the side-plates are 3.2 mm diameter, or rather, 1/8". The holes in the switch base seem to have (had) thread, quite likely 6BA for mounting with screws. (Screw-mounting was used on earlier versions of the motor.) For repairing this motor, could have used new screws, but plastic pegs would be more correct for this 1933 Meccano motor, so scouting for 1/8" plastic pegs.

Where to get black, rounded-top plastic pegs of 1/8" diameter? 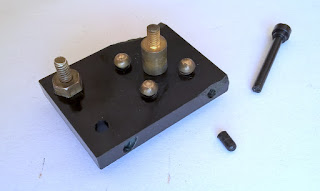 It took me a while to realise, but there was a ready supply of 1/8" plastic rods in the house!

The Lego-brick is originally an English invention, and even today has a bit of a mix of imperial and metric dimensions. The base-dimension is 1/16" (~1.6mm), the wall-thickness of the brick. The height of a brick is 3/8", with the tile-bricks 1/8" thick - also the rods and antenna's are 1/8". Using the vast online marketplace for Lego parts, sourced a few extra of part 3957 (Antenna 1x4) in black. 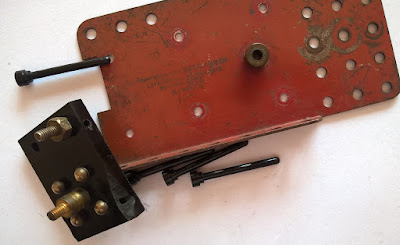 The holes in the switch-plate needed drilling out to 3.2 mm. It's been remarked before that these motors are not precision instruments, the plate again confirmed this. The holes are not placed at the centre of the sides, but one set was significantly offset to the front. (Probably contributing to the chipping.) In the factory, a jig would surely have been used for drilling - this particular part must've been placed sloppily in the jig. (Or more likely - a wandering drill if done by a previous owner as a repair.)

With the plate clamped between the side-plates, the holes were drilled out without too much damage otherwise.

A short length of the rod makes a peg that was then glued in place. The chipped areas also built-up again with PVA and cut to create a reasonably flat surface again. Still visible as damage, but less glaring. 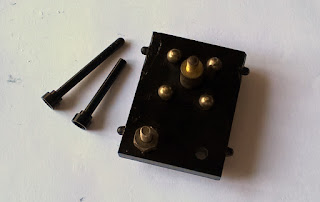 The pegs now jut through the holes and look exactly as the originals would have looked. 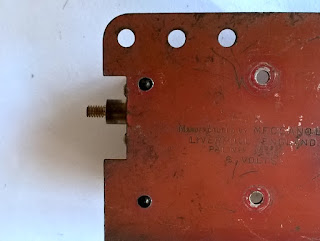 Next up to re-assemble and see about the windings.

Posted by RobertG at 2:07 AM No comments: 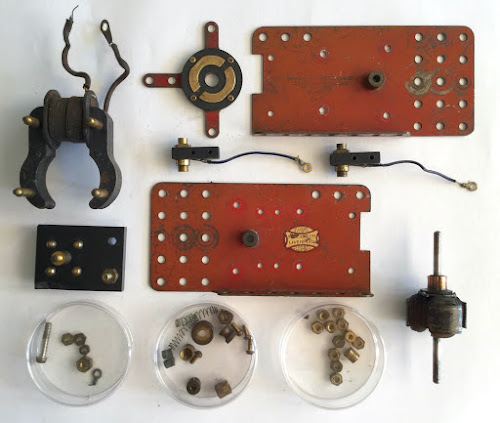 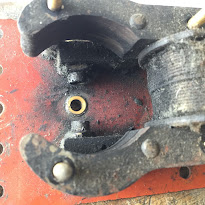 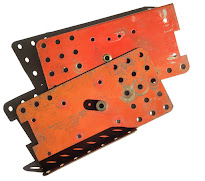 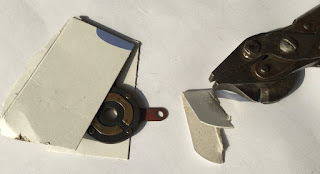 Posted by RobertG at 8:02 AM No comments:

Vintage items bought online nearly always arrive well packed in boxes with lots of padding, some are very well packed indeed. Unfortunately this particular vintage item was merely put in a plastic envelope with two small, loose bits of foam-pad. It did not end well. 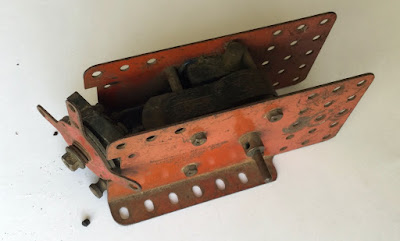 This is (or was) a Meccano E6 reversing 6 Volts electric motor. It's very sturdy, but also very heavy and got a nasty knock...  This bent and broke the switch-assembly and knocked the pillars out of shape, making the armature foul the stator. The seller was very good about the unfortunate event (he had completely run out of boxes that week), however leaves the question: what-to-do with this ~80 year old item.

As with every niche-subject, there is an astounding amount of information on the internet on Meccano and Meccano motors. From various detail features this specimen can be identified as an E6 manufactured in 1933. Originally it would have had bright brass and the paint would've been red.

The red & gold decal still looks fair, although the originally-red paint has faded to an almost-orange. It must've spent decades sitting on a shelf in a shed in the sun. 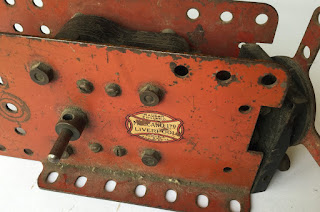 These motors are not exactly precision-built instruments, these are to a fairly 'rough' design originally dating back to around 1916. This means it should be 'forgiving' and practicable to attempt a re-build - seems a shame to have to discard (or dismantle for parts) this 87 year old toy motor.
Will be having a 'tinker' to see what can be done.  :)
Posted by RobertG at 10:41 AM 2 comments: