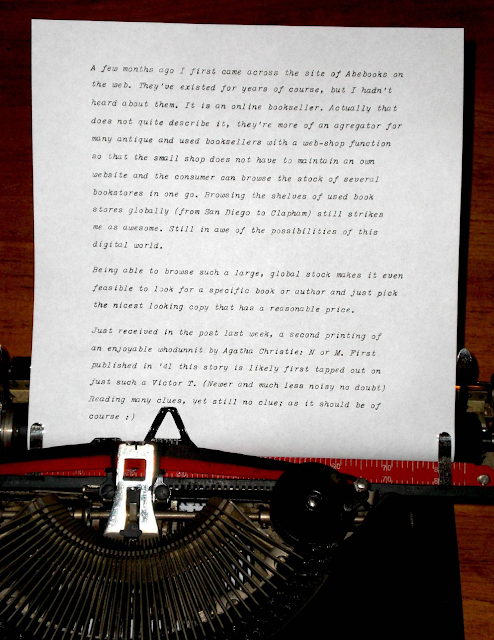 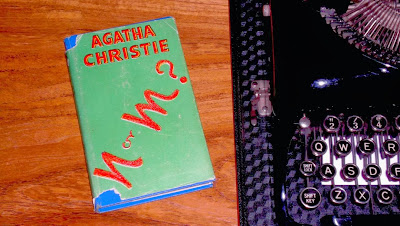 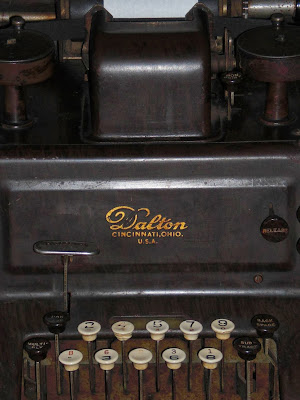 Scratches to the logo probably from an old cleaning attempt of the lettering...

Much of the original woodgrain finish now blends with the brown of surface rust. Nevertheless the mechanism is still oiled well, all springs still attached and working magnificently.

The adding machine adds, subtracts and prints just as it was designed to do.

(The number of ads for adding machine repair men in newspapers of the time make me fear for the mechanism to go wrong. Touching wood.)
Posted by RobertG at 3:19 AM 2 comments:

The rise and decline

The rise and decline of the typewriter that is.

After its gradual invention in the latter half of the 19th century the typewriter as a device equally gradually enters the consciousness of society. By the turn of the century already it is a well-known term and it has achieved a steady presence by 1920. (The 19th century data may be under-reported, being diluted by type-writer and other variations.)

After about 1985 the typewriter rapidly fades from view again, being superseded by the computer as a tool to create printed matter.

The graph that shows the typewriter's steady presence over much of the 20th century is from Google's n-gram viewer. This is a great example of a new tool made possible only by the advances in information processing and storage technology. As a result of the Google project to scan books, a very large body of text from books from several languages over several decades is now available as searchable, digital text. The n-gram tool is introduced and explained in this TED talk, highly recommended if you have twenty minutes or so to spare.

Using this n-gram tool on the English body of text from 1870 to 2000 gives some more information also on e.g. the emergence of the term 'portable typewriter'. The graph shows the portable entering later, matching perhaps the introduction of the first successful model with the Corona around 1912. The odd dip in the mid twenties is also present in the 'typewriter' n-gram, unclear what (if anything) this signifies. This might be a skew in the corpus subject matter; perhaps more novels and fewer magazines and technical publications. (The skew does not show in some other 'technical' terms though.)

Typewriter related terms, such as 'backspace' and 'shift key' begin showing up around the same time that the typewriter becomes mainstream. The prevalence of these terms is probably too low for variations over the decades to have any significant meaning. One pattern that however does stand out is that both terms really gain significance after about 1985. Whilst these terms were (probably) created from the invention of the typewriter, these really take off from their meaning in the realm of computers.

The n-gram for the word 'computer' matches this. Having been a niche term, the computer becomes gradually better known from about 1950 on and steadily rises in the public consciousness. The computer really becomes mainstream and a household word from about 1980. Around that time the computer is not only for (large) companies anymore, but becomes a household tool that can also be used to create printed matter. I think the n-gram probably reflects that. (Though a bias in scanned material could seriously skew here; e.g. including Dr Dobbs instead of a general interest magazine would have an impact.)

The computer is of course more than a tool to create printed texts. It is a ubiquitous tool for a wide range of information tasks. As such it is understandable that the computer has a much higher share of the body of text and share of the public consciousness. The typewriter as a term hovers around the 0.0003 percent mark, the computer seems to level off at a full 0.01 percent!

Fitting then that it is the computer that make such graphs about typewriters possible.

One more thing noticeable about the n-gram for the typewriter is that even in 2000 it still has not dropped entirely out of the public mind. The later data may be slightly less reliable, but might the graph suggest a slowing of the drop? A hint of an upward trend in the typewriter?

Better than good is 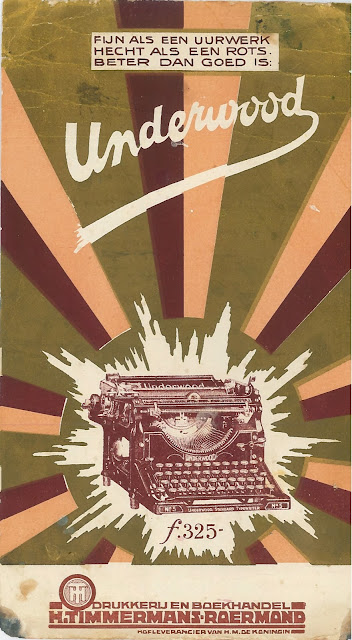 Picked up from the local Ebay for a small payment and a 5 minute bike ride. A blotter of thick paper printed with the Underwood advertisement on the front. From the style of the graphic and the typeface I guess this is almost a century old.

On the scan those rays show as a greenish-brown, but that is actually printed in gold metallic ink. With the now faded orange and the deep red that would have been quite striking when new. Also fairly expensive to print I think. But at Hfl 325 the machine is not cheap either. It is hard to translate such amounts to modern context, but I guess this would today be in the range of the price of a car.

The advertisement text extolls the virtue of the machine; that it is very good. (Debatable if being better than good is a good thing, but we'll let that pass :)  It does not have a differentiating feature or other unique selling point compared to other typewriters, it just claims superiority in being a typewriter.