The Synela brand, a Dutch typewriter made in Italy for Spain

The Synela portable typewriter is clearly a S.I.M. machine, one of the rarer name-variants.

Online mentions of Synela typewriters are few. In ETCetera number 79 is noted that in HBw-Aktuell of May 2007 there is an item about the Synela portable (SIM name variant). Then one more mention in ETCetera number 93 of March 2011 of a Synela arriving new on a collector's shelf. Apart from those two machine-mentions, only the name is included in listings of the many-varied names that S.I.M. produced. No trace anywhere else of Synela typewriters (or macchina per scrivere, máquina de escribir or schrijfmachine). Based on this, there may be three Synela machines in existence (although the 2007 and 2011 mentions may even be one machine). So the Synela-brand is fairly rare.

For a name-variant to be produced by S.I.M. some volume would be expected - making the tooling to stamp the new name would not be done for only a hundred machines (or would it?). Who or what then is Synela? ( It may be that the HBw-Aktuell item of May 2007 has the full story, but haven't got that publication - if anyone has, please do tell :-) )

The Synela was made by S.I.M. in Turin, Italy, it has a Spanish keyboard layout and was found in the Amsterdam area in The Netherlands. Searching then a bit more on the Italian, Spanish and Dutch language web actually yielded a mention of the Synela in Spain! In the Spanish National Archives is a paper document with a proposal for the supply of typewriters of the Synela brand by the agent of the Dutch syndicate Synela in response to a government tender.

The document itself is not scanned, but the item is listed on the portal to the archives. The offer is dated as October 1938, so not clear who issued the tender. The document itself probably contains more information, e.g. about the number of machines offered. No indications found so far if an order was ever granted, this was towards the final stage of the Spanish Civil War. This Spanish-keyboard Synela portable typewriter almost certainly is linked to this Spanish offer. It is however not clear if machines in existence are samples to support the offer, or actual delivered machines.

The Dutch syndicate "Synela" mentioned in the Spanish archive was the Syndicaat voor Handel en Industrie "Synela", with offices at De Dam 2a, Amsterdam, The Netherlands (i.e. Syndicate for Trade and Industry "Synela"). Ergo the 'Syn' is for syndicaat, not clear what the 'ela' is for. Could very well be the initials of the founder, or could be 'energy and aviation', the a could be for Amsterdam, etc.

They e.g. get mentioned on page 8 in a small notice in De Nieuwe Leidsche Courant of September 27, 1958 for having won a defence contract for aircraft maintenance and parts.

They again get mentioned several times in the 1960s in 'International Commerce' (published by the US Bureau of International Commerce to promote international trade). They are listed as an interested party for e.g. power generators and aircraft parts - i.e. items that would be sold to governments. An address in central Amsterdam - De Dam no less - also fits that profile. The company even has a NATO CAGE code - probably still active mid 1970s. The company (CAGE code H5181) then is listed with an address in Voorburg. When the company was dissolved, it was located in Mijdrecht and/or Naarden.

So the Synela brand portable typewriter was probably made as a one-off, ordered by the Syndicaat voor Handel en Industrie "Synela" as part of their bidding for a Spanish government (which?) contract for typewriters. As a trading company, they looked for a source and then went to the major OEM maker of typewriters at the time; the S.I.M. company of Turin. They will surely have had samples made to support their bid. It is i think uncertain if the order was ever fulfilled by them.

Next to any extra information about the 1938 bid, it would also be interesting to be able to compare the serial numbers of all three (?) known surviving Synela typewriters. Also curious if all known Synela machines indeed have a Spanish keyboard layout. ( Anyone with a Synela portable typewriter; please do share! )

This particular Synela portable typewriter as found near Amsterdam was likely never supplied to Spain, but kept at the company in Amsterdam. It probably dates to 1938 or 1939, lost its carrying case (if it ever had one) and was (ab)used, inexpertly serviced at some time and finally damaged further in transport.

This particular Synela was then in 2022 stripped down, to see if it can be revived: This is yet another name variant of the S.I.M. portable typewriter, made in Italy. As is extensively documented on multiple webpages, the Societâ Industriale Meccanica of Turin made the same portable typewriter from about 1932 to 1953 with several different housing styles and a large variety of brands. Most of these 'typewriter brands' were store-brands, although some seem factory-own brands (e.g. SIM, Montana). The Synela is probably a 'private label' variant of their machine. 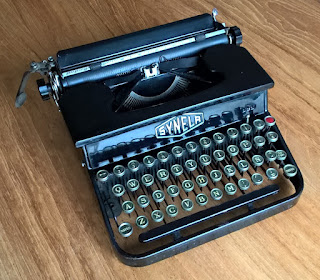 This was a bit of an impulse buy - it was a S.I.M. which I thought not a particularly special machine, but hadn't seen a Synela branded one. Also the glossy black angular housing looked neat. It had been on Etsy for several months at 'aspirational' prices. Hadn't spotted it there, but it then it popped up on the national classifieds site for a much more reasonable (but still respectable) asking price. So 'went for it' and got it shipped from a vintage-shop in the Amsterdam area.

Packing was discussed - buffering all around! Yes, buffer all around, no worries. Well. It'd be funny if it hadn't caused damage - yes, there was buffer all around. The machine was placed on its back on the bottom of the box and then very well buffered on the sides. That was a new one...

Ergo; the machine was damaged in transport. A cast frame-bar is broken (see offset between the I and M of S.I.M.).  The draw-band was tangled with the escapement (?), the ribbon-transport only works one-way (broken ratchet), the shift is wonky. A pity is that even the colour of the ribbon-selector is gone; pulverised remains of paint in the box (vibrations?) - before shipping it was still there...

No surprise - this Synela doesn't type. Notable that on Etsy this machine was listed as working (as seems to be the norm on Etsy, although to be fair it did not have the Etsy-usual 'working perfectly'). The transport-damage hasn't helped, but it's doubtful that this typewriter was even half-functional before shipping.

The first result of all this is that for now we'll only be doing pick-up in-person of new typewriters.

Another outcome is that we have a typewriter with 'issues' that is not a particularly special or rare model, so no qualms about taking it apart and seeing what can be done to revive it.

It does have a less common brand-name, so there's also that to find out.

Not quite the outcome as expected ("yes, will be buffer all around", really...), but for sure plenty of enjoyable tinkering ahead.

The lock of a typewriter carrying case

Specifically; the mangled lock of the case for a 1930s Erika M typewriter. This is a relatively heavy, expensive typewriter, so had a fairly solid case with a lock. The lock of this machine's case had however been badly mangled, the flip-up clasp had been pried off with brute force. Luckily it was still hanging on to the lock, albeit with only one (mangled) leg. To be able to re-fit this clasp, the holding-bracket needs to come off. To remove the holding-bracket, you need to get inside the lock. So the whole lock had to come off. 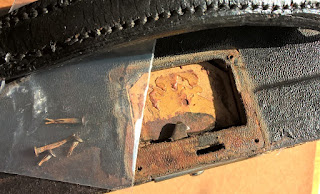 Luckily in this case, the lock is fitted not with rivets, but with split-pens - with some careful closing the split-ends and prying them up, the lock can be completely removed from the case lid. 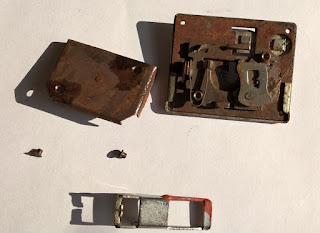 Then the lock can be opened by removing two screws from the back cover. The lock itself is rusty, but the front plate and the holding-bracket and clasp are made of brass. Cleaning and careful bending (brass!) got the clasp back into shape again for re-fitting.

As it is open anyways, all parts were taken off and cleaned. When re-assembling, the thick tabs of the holding-bracket unfortunately cracked (brass...) - to fix the bracket, as an alternative fix, the bracket was soldered into place. One thing to check when assembling a lock, especially when there's no key, is to make sure it's put together in the unlocked state. (As I discovered after putting it together the first time...)

The whole thing re-assembled and given a polish, it is put back with the original split-pen nails into the case. The clasp now snaps open and closed again to hold the slide unlocking the case. With the right key it probably also locks fine again, but for now will not be pushing my luck with that :-)

Spotted in a local thrift-shop / recycling centre - two bulky beige office typewriters. They were on the same shelf, separated by another beige machine. They probably spent their working-life in the same office too. 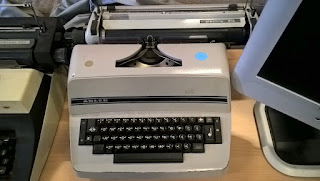 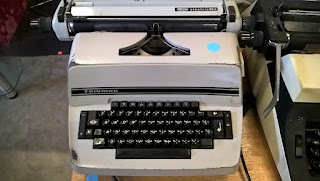 Makes one wonder - what was left of the Adler or Triumph brand-identities with badge-engineering this obvious :-) 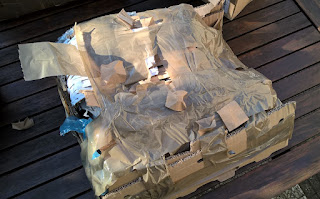 After taking the item out of the padded shipping box, it's still completely wrapped in buffering material. The seller thankfully took extra care, using the online packaging advice provided by an experienced collector of mechanical calculators. The extra buffering held in place on the machine helped to prevent any of the cranks taking the mass of the machine during transport handling. 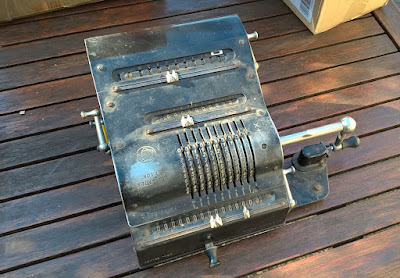 The padding removed; revealed is a mid 1920s Nova Brunsviga calculator Model II. The machine is dusty and dirty, but it is complete.

This is a common model; about 10,000 Nova Model IIs were made and today these are not rare. It's quite a large machine and surprisingly heavy at well over 12 kg - built like a freight engine; precise to fine tolerances, large and exceptionally robust.

This calculator appears to have survived the (always risky) shipping well, just as it seems to have weathered the past 90-odd years quite well. It is very stiff with congealed lubricant - from reading about other Nova's online this seems a common theme, so possibly it's the factory-original oil.

Although everything is stiff and reluctant to move, a brief check showed that all functions still work correctly as they should - a quality machine! 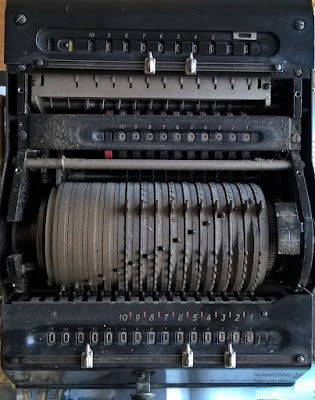 Taking a quick peek inside the calculator by taking off the front-cover suggests that this calculator is 'unmolested' and in original condition. The dirt on the plus-minus indicator vane will have taken decades to collect through the small indicator opening. This calculator has not been serviced (or opened) for decades, although the wear-pattern of the paint shows it's been well-used originally.
This will be a fascinating machine to tweak back to shape - it will however have to wait for a bit, on the shelf for now.
Posted by RobertG at 4:46 AM No comments: