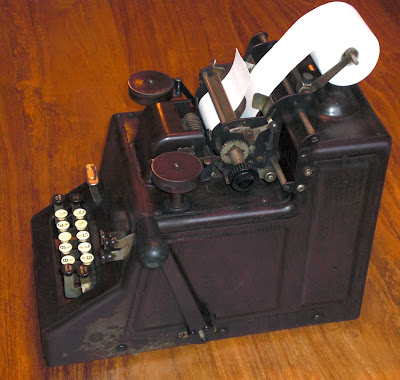 The machine now viewed from the front, operator view with the large lever at the right. After entering a number, pulling the lever all the way forward enters it into the machine and records it on the paper. The printing mechanism is of the rising segments type, as would I think be fairly common in cash registers and similar machines. 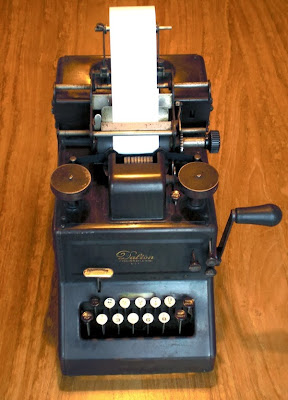 The insides of the machine viewed from the right-hand side. The body panels at the sides come off by sliding forward to unlock. The rear panel comes off also by sliding. This gives access to the main parts of the mechanism. The part that looks like a carriage (it actually is a carriage) surrounded by a frame that takes centre stage in the picture is the number buffer that records the digits as they are entered. When new the mechanism would have been very striking, all shiny and polished with a circular swirl pattern. 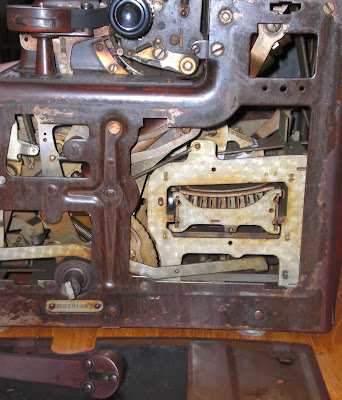 As digits are entered, the buffer carriage indexes towards the left, to be ready to take another digit in the next decimal position. Here the carriage is moved all the way to the left, the buffer is full.

The serial number NO201609 is on the frame below the lever spindle. From what I've been able to find on the internet, this serial number is towards the end of the range for these machines making this a machine from about 1926.

As the lever needs to be pulled with some zest and force to operate the mechanism, it is quite long and has a large spring and/or dampener as well. This buffer (the large diagonal tube) almost fits inside the machine, needing a cut-out in the top covering. The totals register is toward the top of the machine, almost visible behind the tube. 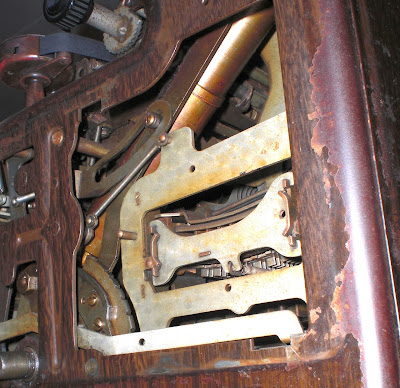 When entering a number on the keyboard, there is a display that shows how many digits were entered. Not the number that was entered, but the number of positions. This is by dots, behind a transparent window (now less transparent than it was when new). 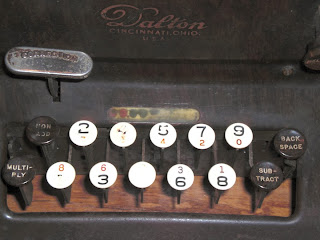 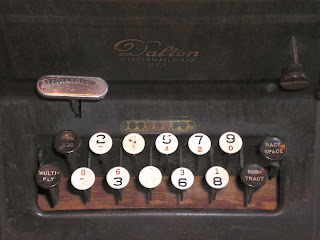 And again with an empty buffer, no digits. The buffer is emptied when entering the number by pulling the lever. It can also be emptied by pressing the large 'correction' key, this slides the buffer all the way back to the right and clears all digits. (The black spot shown at the left in the window is corrosion or dirt, not one of the dots.) 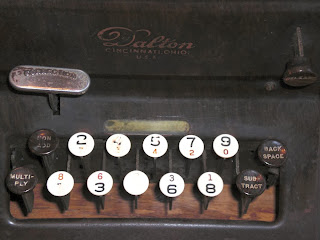 The keys on the front panel of the machine set the machine for doing a total or a sub-total. The sub total does not clear the result buffer when entering the next number, so you can keep adding numbers. One thing that takes a while to figure out with this machine, is that it needs one extra pull of the lever before it is ready to do a total. This adds of course an extra line on the paper (extra paper feed) and I think it is needed to clear and align the mechanism for the printing of the total that is kept in the sum register. Having done one 'enter' without any digits entered, the totals keys are unblocked and can be pressed down. The next pull of the lever prints the calculated total on the paper, the digits are printed with an asterisk behind it to indicate it is a sum. 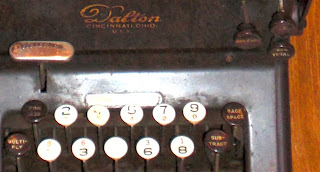 The release key is the 'undo' of selecting to do a total.

The multiply on the keyboard is a bit of a misnomer, this simply allows for multiple additions. Keep count and pull the lever repeatedly. Pressing down this key prevents the input buffer and the sum-register from being cleared after an addition.

The simple printing mechanism has a key that disables the printing. The printing is actually the only way to read the calculated totals, so that is a bit of an odd option. 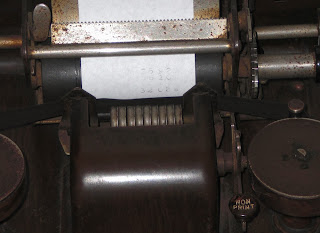 The printer has 9 segments that slide upwards to select the correct digit. The right-most does not print digits, but the extra symbol to indicate it is a total or sub-total. It really needs a fresh ribbon, but faintly it shows the sum of 25.92 and 6.10 to be 32.02.

Probably there's an operating instructions booklet for this machine out there on the internet somewhere, but haven't found any yet. Actually the service and repair manual for this machine should be an order of magnitude more complex and interesting. For now, just hope nothing breaks.
Posted by RobertG at 5:01 AM 4 comments:

The inside of the Dalton Adding Machine looks slightly better than the outside. Only slightly. 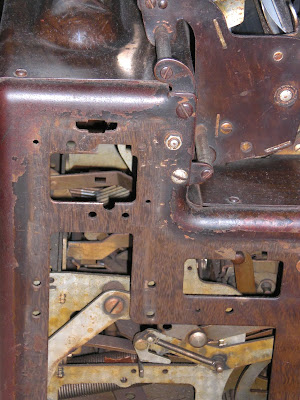 On the plus side and impressively - it still fully functions. No stuck keys or stubborn carry, the printing unit still works fine even. Doubly impressive because it is a very complex mechanism and an early piece of digital information technology. It has a worrying amount of springs to keep it all working. Compared to this machine, a typewriter is simplicity itself.

The drawings of a couple of patents for the machine really illustrate the complexity inside of these digital machines. These pictures also are much easier to view than the machine itself. (I'm not going to dare to dismantle the mechanism from its frame!) 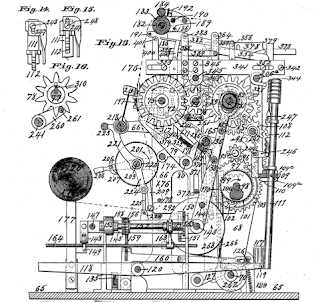 A top and rearview of the machine from this same US patent publication 517,383 are equally dazzling. 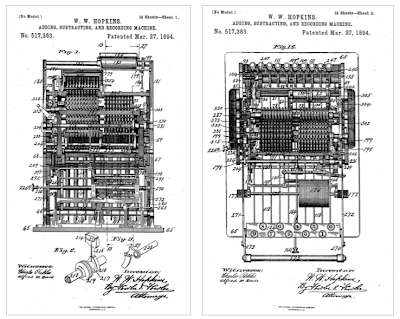 Not that is obvious at first glance at the drawings, but it is a rocking-segment adding machine with a mechanism to enable 10-key entry. This '10-key' keyboard means the machine does not have 10 keys for every digit position, but actually does move the entered number up when adding a digit. At every adding (pull of the lever), the number entered in the buffer is added to the accumulator register. All done by the rocking segment gears with proper carry and correct.

The 10-key entry also means it has a backspace key. A backspace key that actually does erase! Pressing backspace deletes the last digit from memory (the buffer) and moves all previously entered digits one position to the right again.

Several more patents were sought and published for the Dalton machine. Some pictures from another, later publication show the outline of the machine filled with the mechanics.

Just hoping nothing will snap in there; this would be a repair job that is way beyond adjusting a carriage :)

Promotional film by Remington Rand.   (Came across it on the Archive, hadn't seen it before there.)

A short (~25 mins) movie with lots of period office scenes, I'm guessing it is from around 1950. Also lots of typewriters of course with the machines being used in ernest; there would be of course - the reason of the whole movie is typewriters.

Even though the full 25 minutes of it tried to convince me of the merit of electrics, I still quite like the manuals.

But then I'm not needing them to do 'production typing'.