Instructions for the unpacking, assembling, operating and care of the "His Master's Voice" spring driven portable model 101G etc.

This leaflet must be delivered with Instrument to the purchaser. 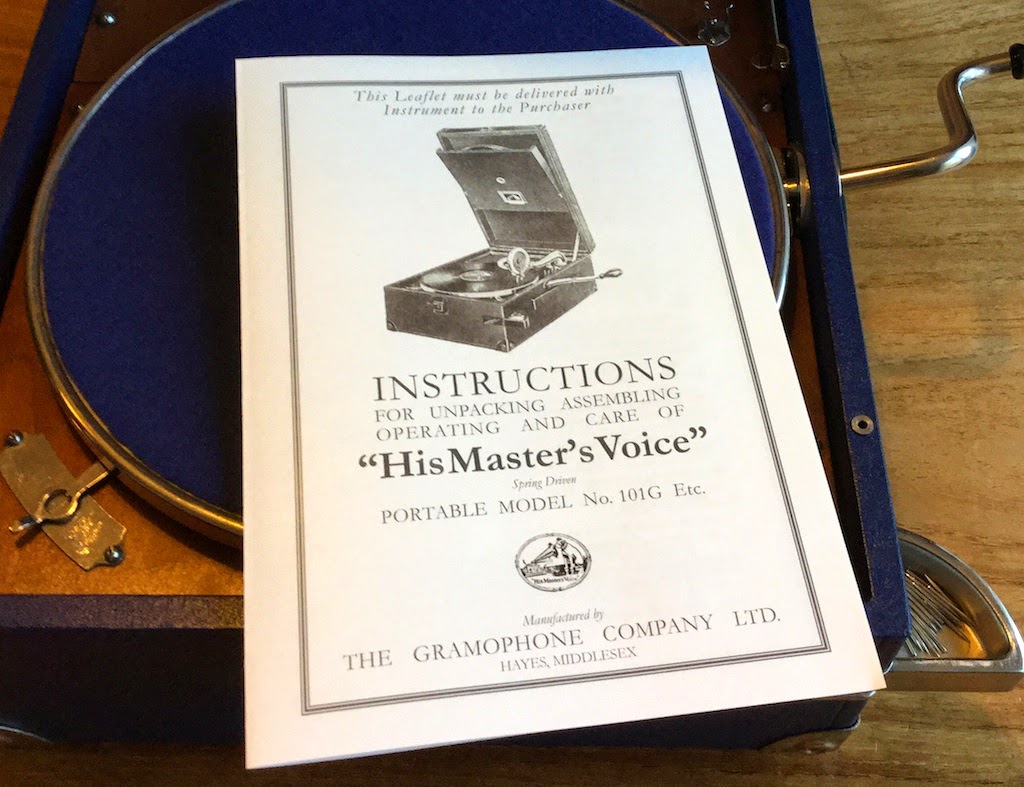 With text-only explanations on the unpacking, operation and care of the instrument. 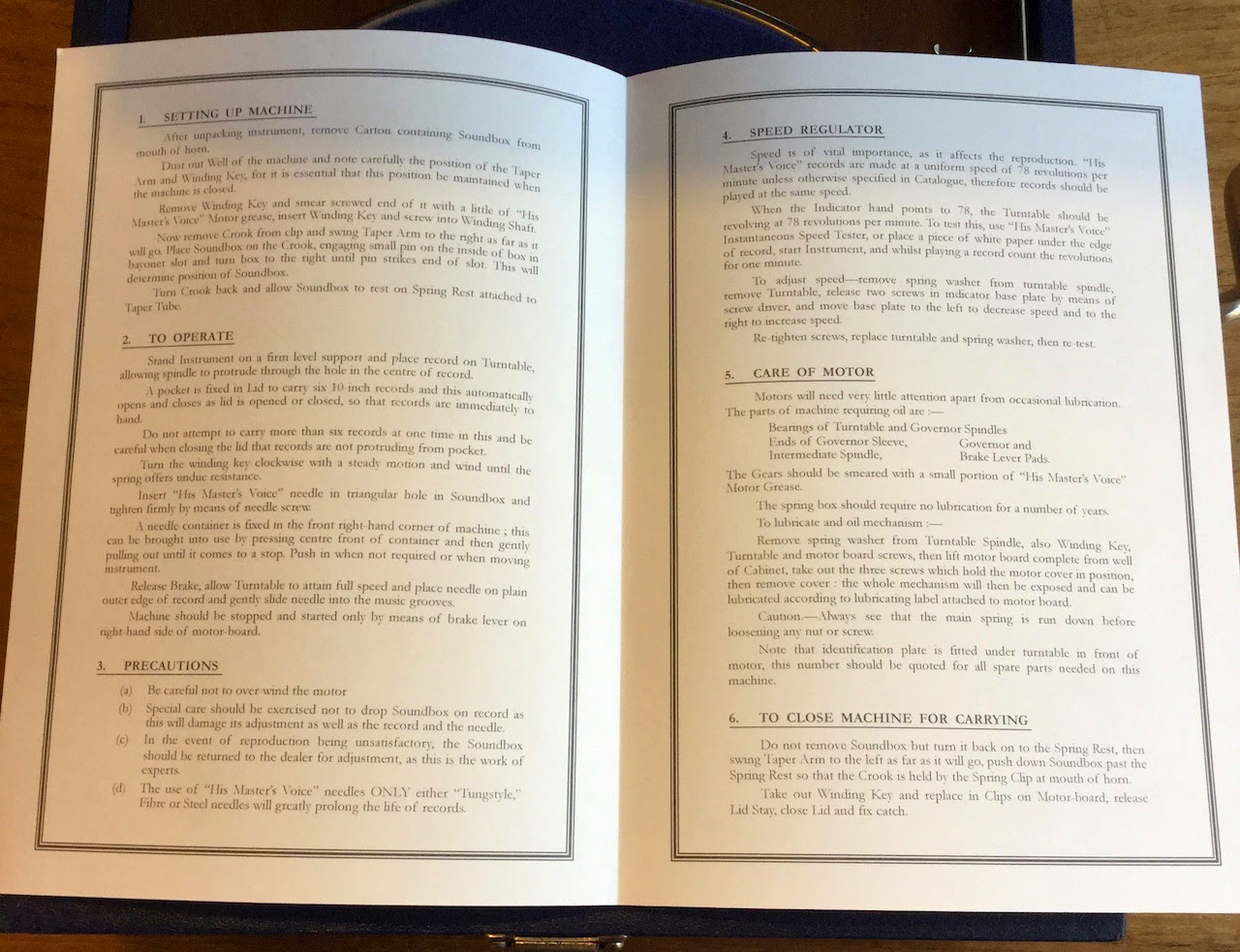 Re-created new with the original text, printed on 160g paper, ivory white, then folded and cut to size.

In case you happen to have an HMV 101 portable gramophone that is missing its manual; it is downloadable here as a pdf for easy reference on a computer or downloadable as a printable pdf. To re-create, simply print it double sided on an A3 page, fold over and cut it to size.

Not essential, but it makes the gramophone just that little more 'complete'  :)
Posted by RobertG at 1:25 AM No comments:

New decal for an old machine

Having re-covered the "His Master's Voice" HMV101 portable gramophone in new Rexine a while back, the finishing touch now is a new trademark.

When re-covering the gramophone also a new tray was fitted. The old tray was still in decent condition with intact trademark image. Just couldn't bring myself to destroy that and re-cover it, so then made a new replacement tray. This also made a few modifications possible to allow records being stored with their sleeves. The whole instrument then had fresh blue Rexine again, but no longer the characteristic trademark painting of the listening dog in front of the gramophone.

Finally went ahead and bought from South America new decals. This Ebay seller has a fairly large range of restoration decals for gramophones, typewriters, radios and telephones. Luckily the HMV trademark image and text as was used on this HMV101 turned out to be pretty much identical to the type used on the HMV157 and that was available. Shipped quickly, well packed and I have to say the graphics really are very nice. 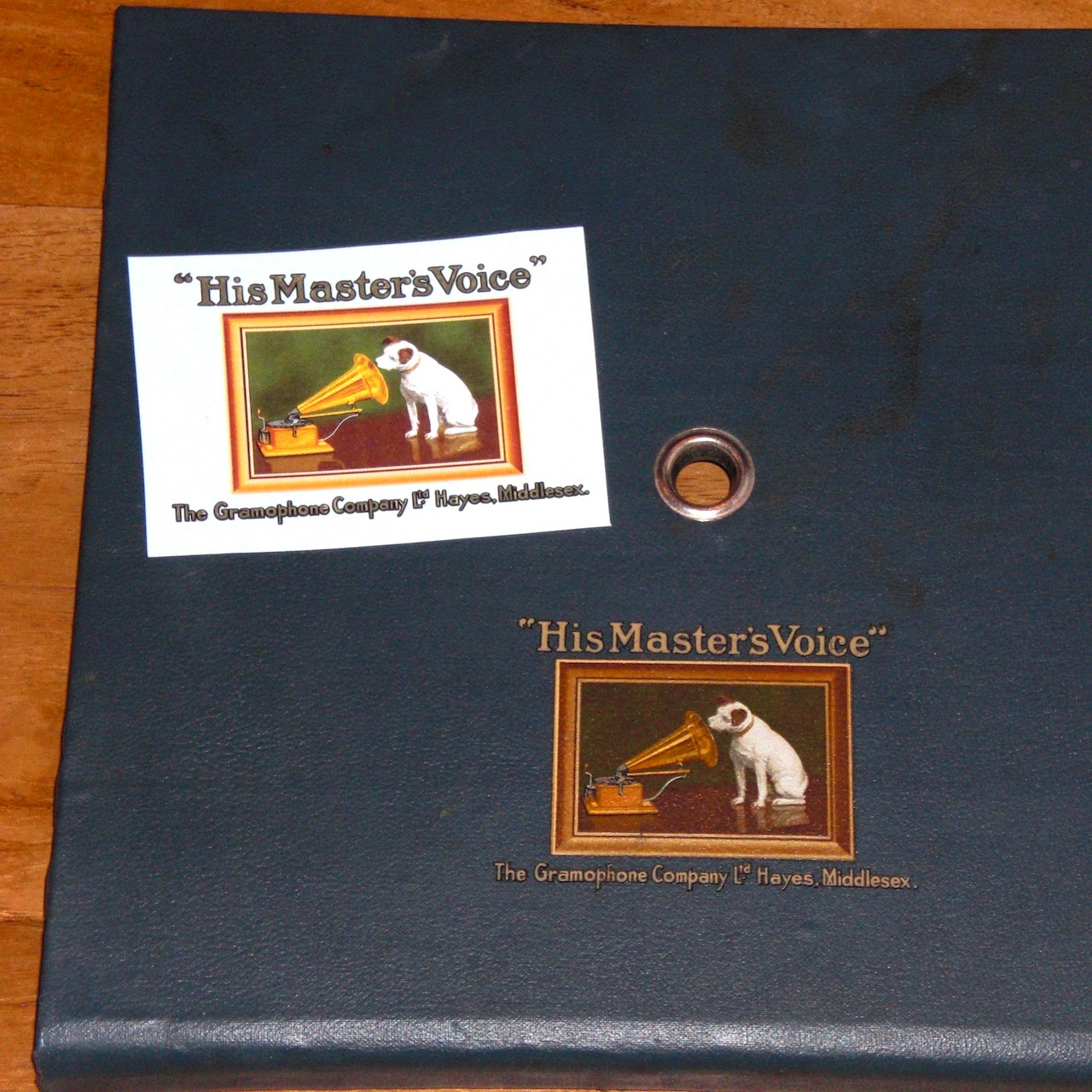 The new decal compared to the original on the (faded) original record tray. The new has shiny gold lettering whereas the original lettering is more yellow. It may have been gold in '29, but in '14 it is yellow. (Having it on the machine, I am guessing it was originally yellow lettering instead of gold and for a reason. With the lid slanted forward, the gold lettering on the 101 is dark and nearly invisible. On the 157 it would be tilted to the back toward the light and shine.)

With the decal came a few snippets of decal to test out the process. These were applied on the small woodblock that was also used to test the Rexine. All that is needed is some warm water (with a small drop of soap) and a cloth. Ideally also a bottle of Microsol and a brush. 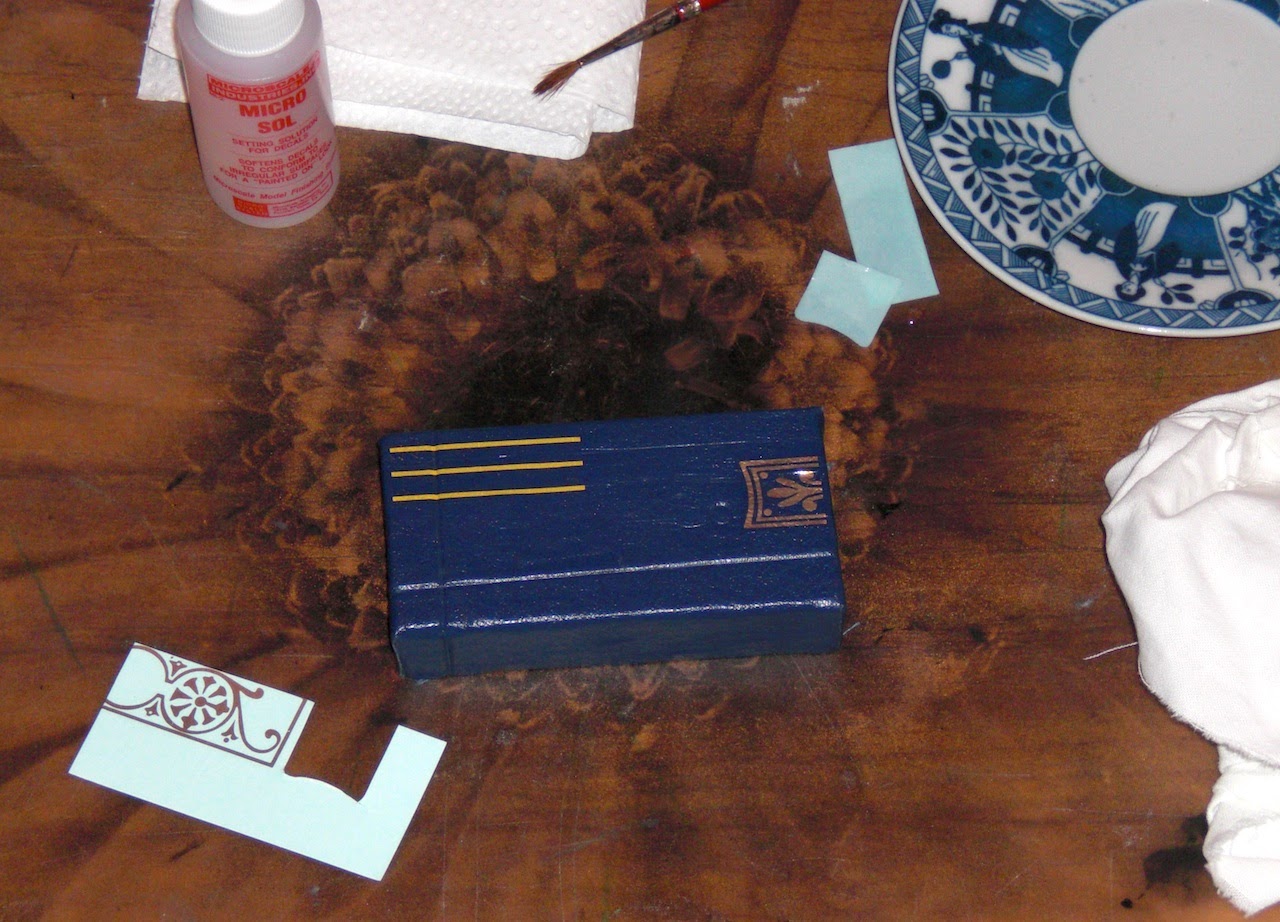 Cut the decal to size, soaking in the saucer it very quickly becomes loose and can be slid from the backing paper in place onto the surface. Techniques probably vary on timings, but applying Microsol after letting the decal dry a bit will then dissolve the decal material. This leaves the ink of the image and reduces and blurs the shine of the decal sheet as well as settles the decal into the profile of the target surface. This worked surprisingly well and luckily did not attack or dissolve the Rexine. 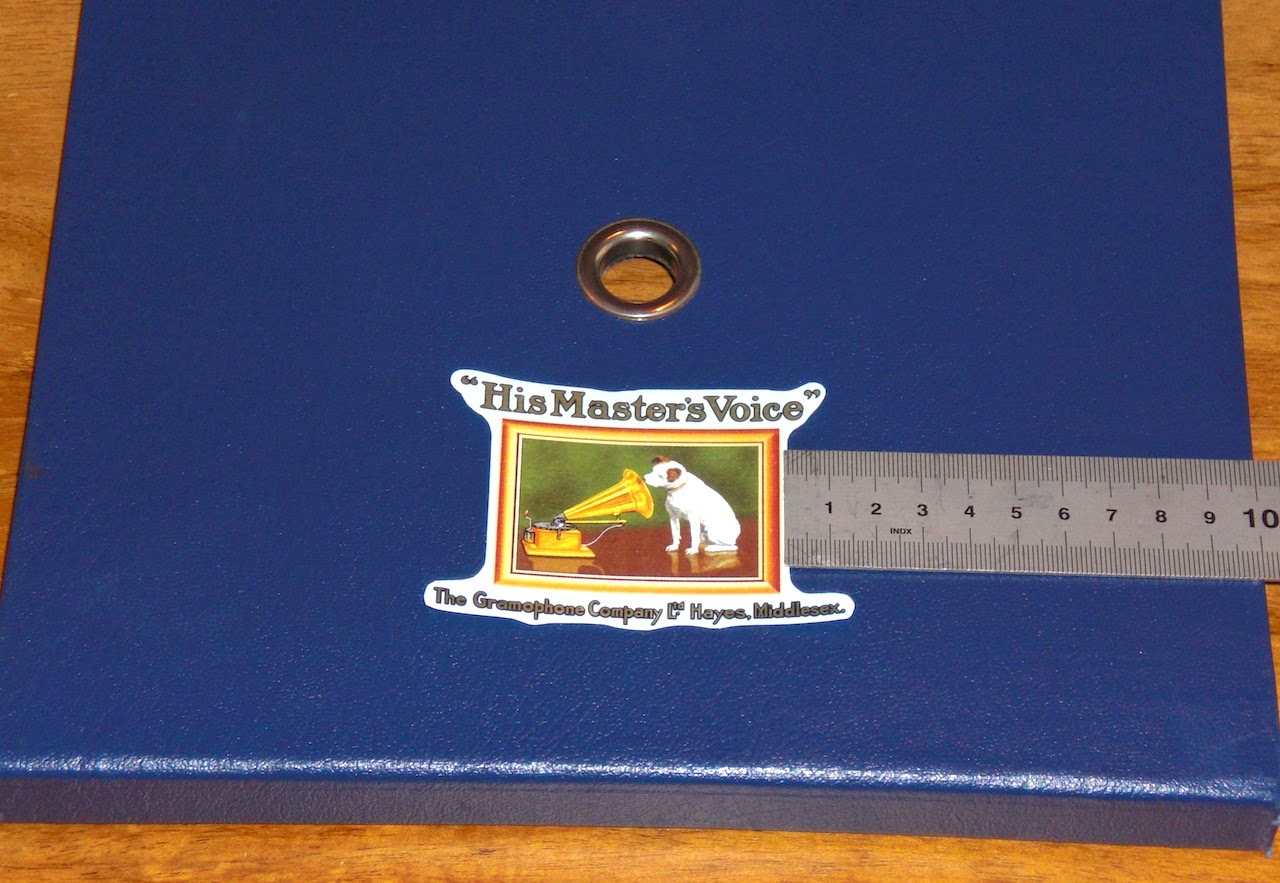 Cutting around the image leaves the least amount of decal sheet, taking approximate measure of where it needs to end up. This is a rather large decal and needed care to not wrinkle or fold, but after applying can still be moved around a bit to fix in the right position. 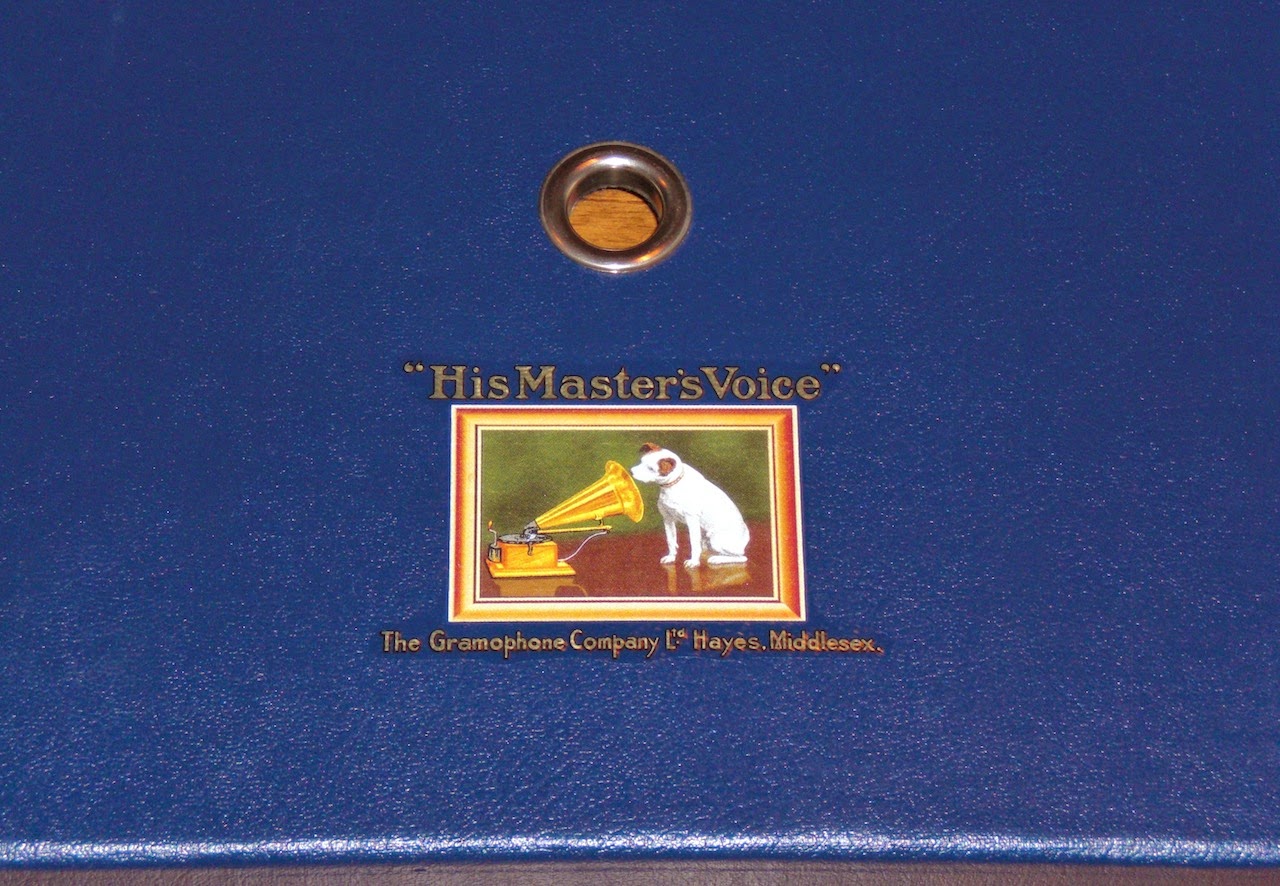 With the decal on the new record tray, very faintly the shine of the outline of the decal sheet can be seen. The painting itself is also a large surface area with relatively thick ink, making it harder to conform well to the Rexine surface. As recommended on the bottle, several applications of Microsol with some time between were needed to blur out the sheet edges and make the decal blend in. 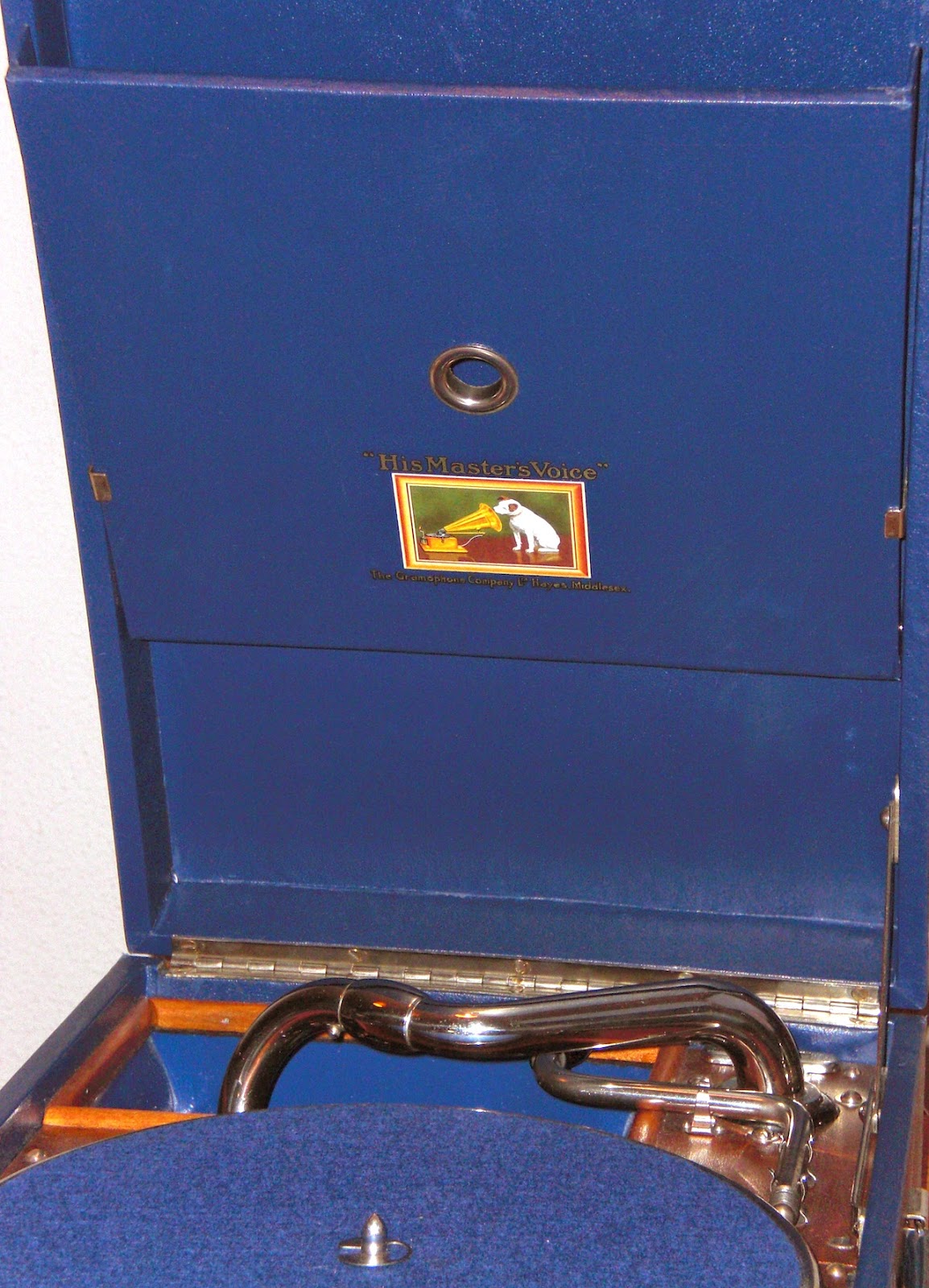 Result is now a bright blue HMV101 with an equally bright trademark. Looking the part again!

(For gramophone anoraking: the new record tray is a slightly modified design to also take records with sleeve. It has smaller and narrow hinge-blocks instead of the larger triangles. Also the sides of the tray were made very thin from thick card to have space for the width of a sleeve. Also the hole for the spindle is larger in the new tray than it is the original design. And of course the deck of the original machine was also blue and not lacquered.)
Posted by RobertG at 7:41 AM 2 comments:

With the impressively expanded serial number page for Remington at the typewriterdatabase, there are monthly serial numbers for some of the portable machines. E.g after September 1928, there is a consecutive serial numbering for the Remington Portable typewriter, a type that is advertised as a Christmas gift.

Taking the serial numbers for the Remington Portable from the database and plotting the size of the monthly blocks as a volume yields the graph below. This suggests that at least for 1929, the monthly increments were done by choosing every month a starting number. The monthly volumes are suspiciously nicely rounded numbers; 1000 or 1100. After summer 1930, the numbers start to suggest consecutive numbering, i.e. they probably more closely represent monthly production volumes. (The sharp drop in block size in the summer of 1930 is a bit too late to attribute it to a likely sharp drop in volume sold after October 1929.)

Looking at the overall chart, there seems to be no clear annual pattern in production volume.

Even when allowing for a longer time from manufacture to actual consumer purchase than there is today, this would surely not be longer than 12 months. The distribution and warehousing also then would have been able to route a machine to the purchaser within no more than a few months. A typewriter was too expensive an item to make to stock, would take up too much capital.

There is perhaps a suggestion in the graph that most are produced in the first half of the year. That could then mean that time from production to sale was around 6 months and the majority of machines is sold for Christmas. An alternative explanation would be the start of the school season being a driver for purchases, with a couple of months lead-time from production to purchase.

The numbers for 1933 however are concentrated in the second half of the year, making it less likely that there really is an annual pattern. Also the volumes become relatively small after 1931 for this type. Overall the graph does not give much insight into the effect of advertising the machine as a Christmas gift. It looks a bit random. At most it could be concluded that there is no clear indication of seasonality in the serials for the #2 and #3 Portable.

With the #2 and #3 numbers trailing off, perhaps another machine would be likely to be a home gifting item. E.g. the Compact Portable of that period. Taking its monthly serial numbers from the database and plotting the size of the monthly blocks gives the graph below.

Again there is no clear annual pattern in the monthly volumes. It may be that the graph is shifted by one (first or last of month), but even then there is no consistent production peak correlating with December.

Ergo the gifting of a typewriter for Christmas may have caused a surge in sales for Christmas, but the monthly serial number blocks do not show effect of this in annual production patterns.

(A very impressive resource is the typewriterdatabase. As already remarked by Ted upon his expanding the Corona page, the data can contain answers and hints for many more and more varied questions than the dating of a machine.)
Posted by RobertG at 12:03 PM 4 comments:

A while back Spider shared an image from the Marktplaats listing for an old Royal Standard 3 flatbed typewriter.

That was (and is) an odd number for a Royal flatbed. Not many turn up, not much widely known about the 3 flatbed. Made me notice then a short while back, when just such a Royal Standard 3 showed up in an old photograph in a magazine. In the image it is parked on top of the roll-up desk. Though small it is clearly visible as a Royal Standard 3 flatbed typewriter. 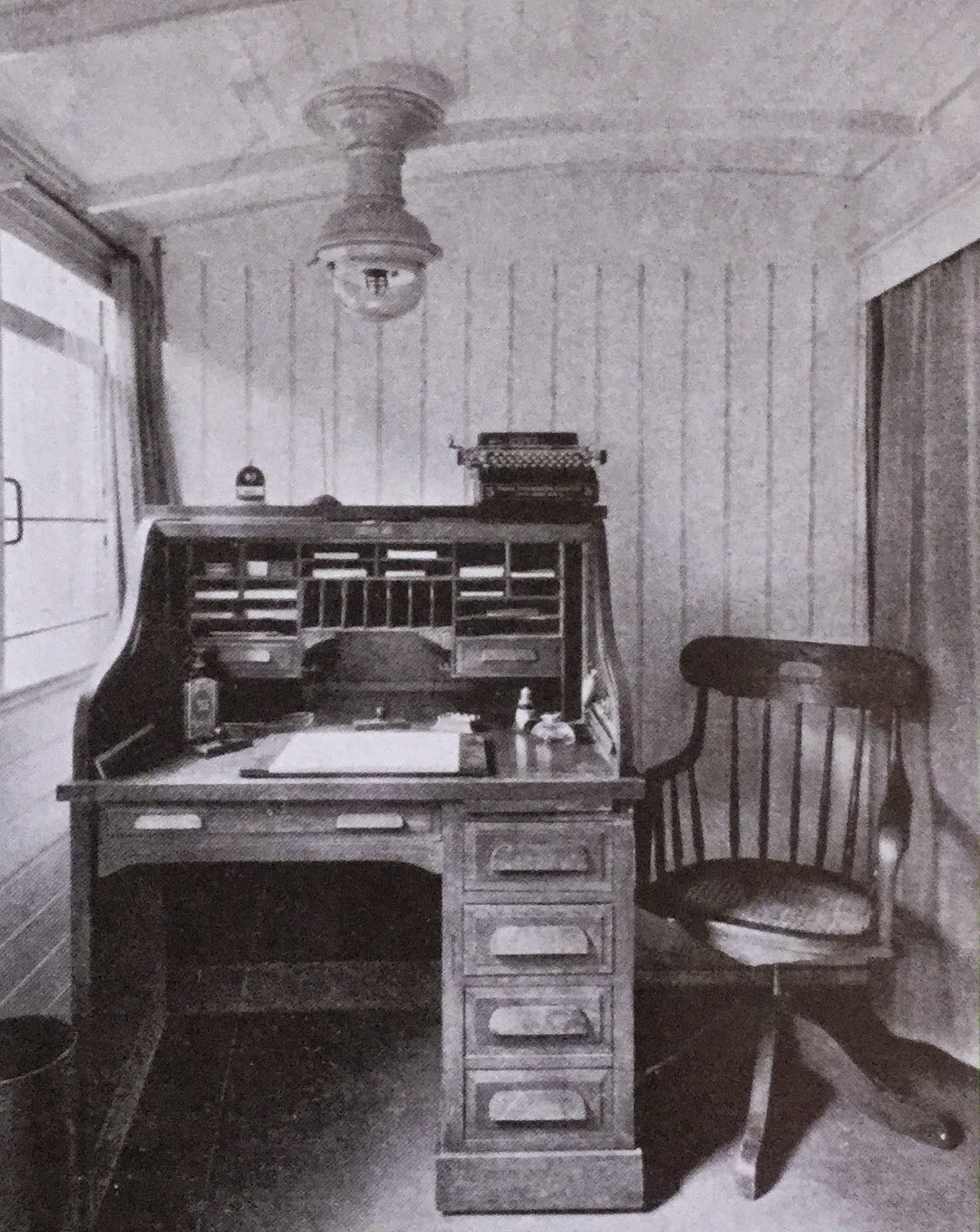 This is a photograph of the head doctor's office in one of the two ambulance trains that were constructed for the Dutch government in 1916. The Netherlands managed to stay neutral and out of The Great War, but did mobilize and prepare. As part of continuing preparations two 15-car hospital trains were constructed. The trains were paid for by donations organized by a national committee and offered to the government as a gift. The front-page of the September issue of De Prins shows the handing over ceremony at Amsterdam, with HRH Prince Hendrik, heads of the committee and remarkably the Greek consul present. 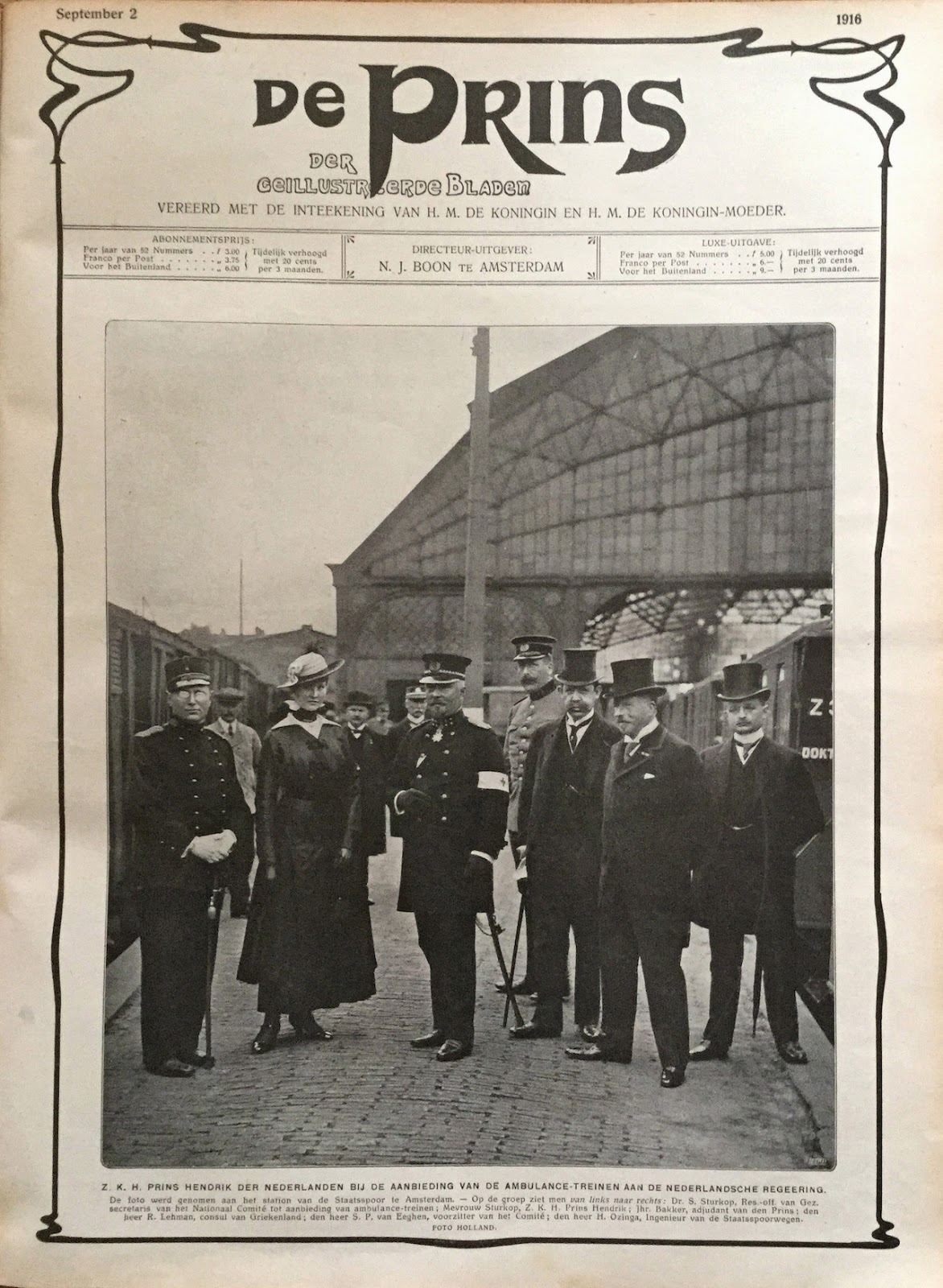 The trains were kept ready and fully stocked with supplies, but never used. The photograph below shows the trains at the Amsterdam Staatsspoorstation yard at their delivery in 1916.

The trains were scrapped already in 1919. They had been intended to be kept at hand also after the war ended to be useful in case of natural disasters, but the cost of their storage and the discovery that they had become 'incomplete' were cited as reasons to scrap. I.e. much of the equipment and supplies had 'gone missing'.

Would be interesting to know the history and provenance of the Royal Standard 3 in that listing. Was that perhaps a machine that was 'liberated' from one of the stored hospital trains almost a century ago?
Posted by RobertG at 5:48 AM No comments: