Greasing the No 59 motor mainspring

One of the things recommended for the type of portable gramophone I'm working on is to re-grease the motor. The Gramophone Company used a graphite grease that over the decades turns stiff and hard. Clogged with this hard grease, the mainspring will be held back and the motor will have reduced power. My particular HMV 101 was only capable of playing a few 'soft' records without slowing down to a sorry warble. This may be that the spring is just worn and lost its spring or that the hardened grease is holding it back.

This 1928 / 1929 HMV 101 portable gramophone has the No 59 motor. By then the company had been building talking machines for 30 years or so and had arrived at a simple and effective design for such single-spring motors. Most of these windup motors are similar in construction, also those of other makers.

To at least deal with the grease, I read up on mainspring removal. This sounded a bit daunting, being an inch wide and about 14 feet long length of spring steel that comes out of a small drum. It also needs to go back in this little drum.

There are several online resources describing how to do this (and not get hurt), an excellent guide is on the pages of John Sleep. Using that description as guidance, I got started. To share another resource online, I took some pictures of the steps to re-grease the mainspring. 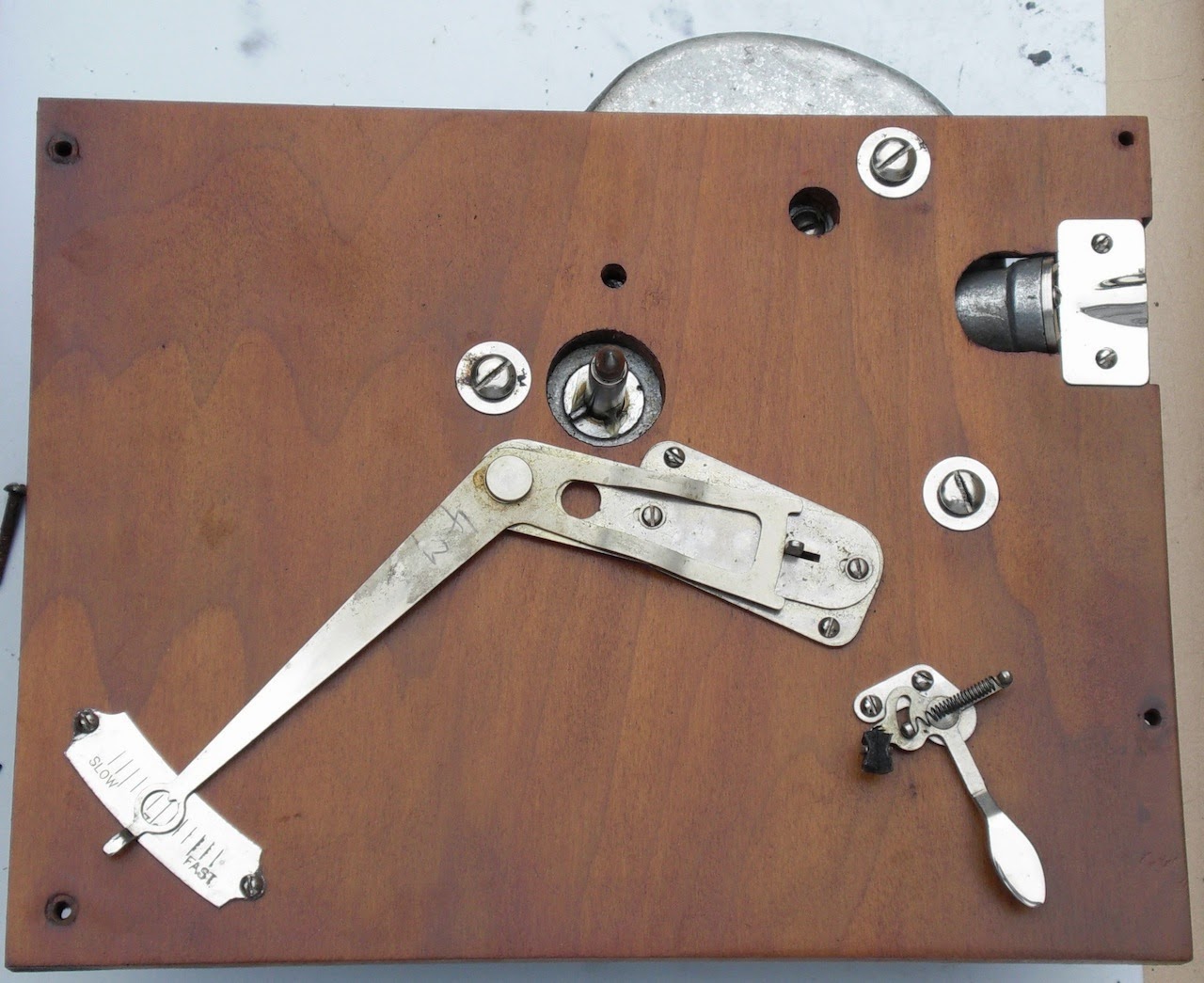 It is not necessary to take the motor off the motor board, but this can be done by loosening the three large screws (the obvious ones). I did remove the motor for easy handling, kept the screws and the spring and washer in the motor board and set it aside. 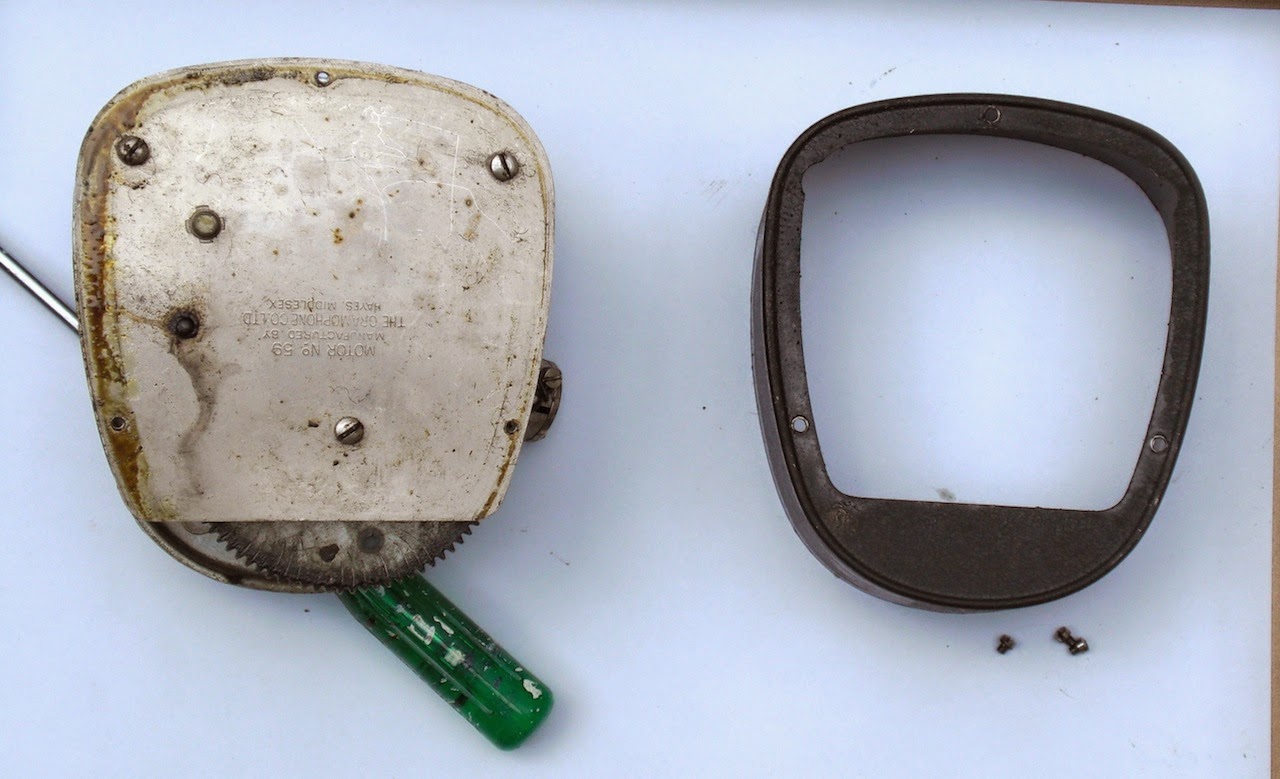 Removing the three small screws on the rim allows the cover to be lifted off the motor. (This cover is actually a nice feature of this type of motor, as the governor will not spread its oil all round the innards of the gramophone but keep it inside its own 'tin'.) 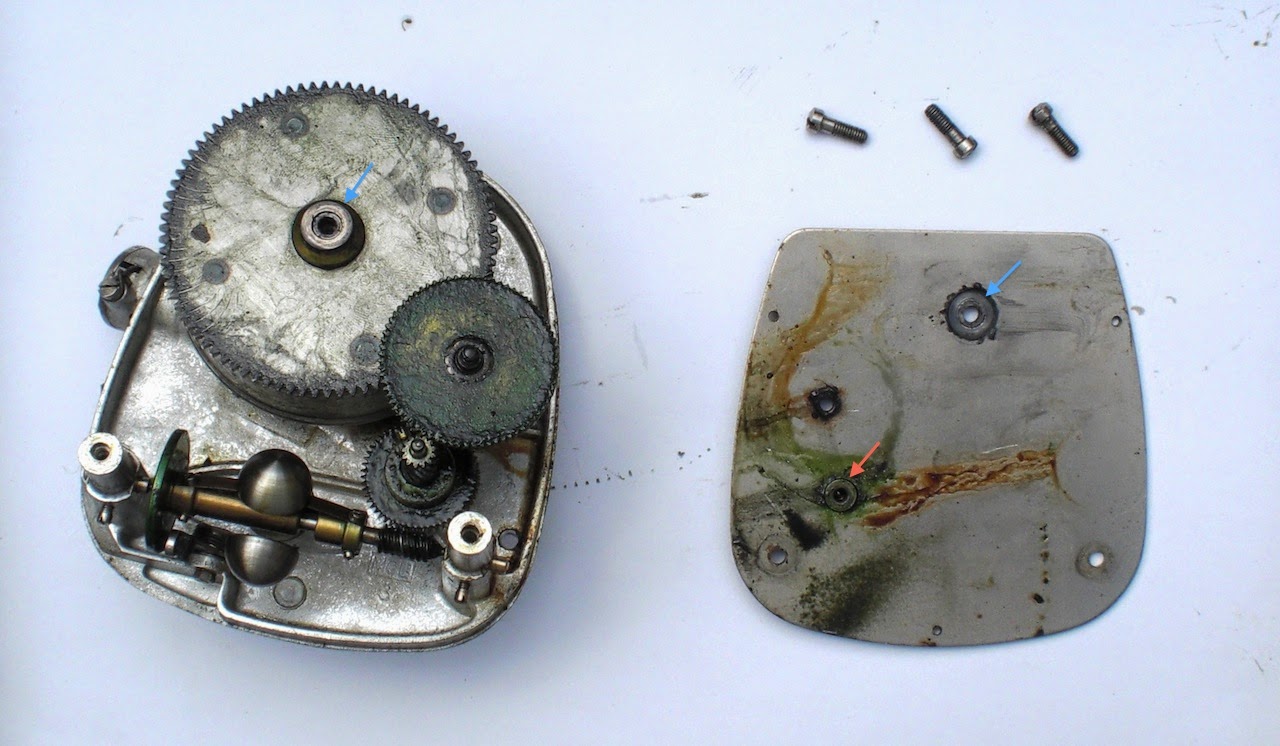 Removing the three screws on the bottom baseplate allows the baseplate to be taken off the three pillars. At this step take care not to lose the ball bearing that supports the turntable spindle (red arrow). Also take care not to lose the bearing washer that supports the mainspring winding cog (blue arrows, can be stuck to either spot). Best use a dollop of grease to fix these to the plate and set aside.

The intermediate gear can be taken off and the spring drum can be pulled off its spindle. (Base plate wiped clean - well it's cleaner that it was. Also now grease in ball bearing and on washer to keep them in place.)

Turning over the spring drum, the winding cog can be pulled out of the drum. This cog is driven by the winding handle worm gear and the groove on the shaft is for catching a notch of the spring. There is felt between the gear and washer. As with all parts, wipe clean a bit and apply some new grease. 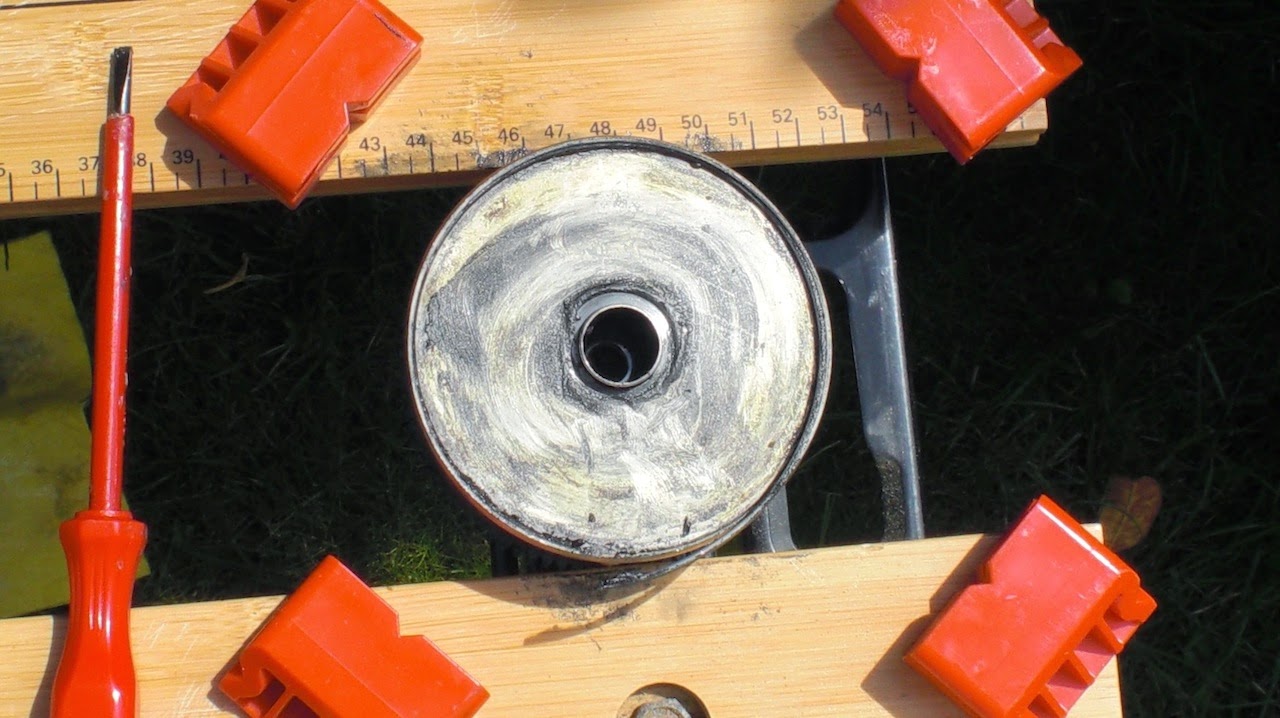 Taking the drum, this should be kept firmly in place during the rest of the proceedings. A portable workbench worked reasonably well in gripping the gear at the bottom of the drum without damaging anything. The lid is kept on by a round retaining spring. Using a sharp screwdriver this can be lifted out of its seat (one end already lifted out in photo, at bottom of image). Sometimes a bit of force (tap screwdriver with small hammer) is needed I've read, but this one came out easily. 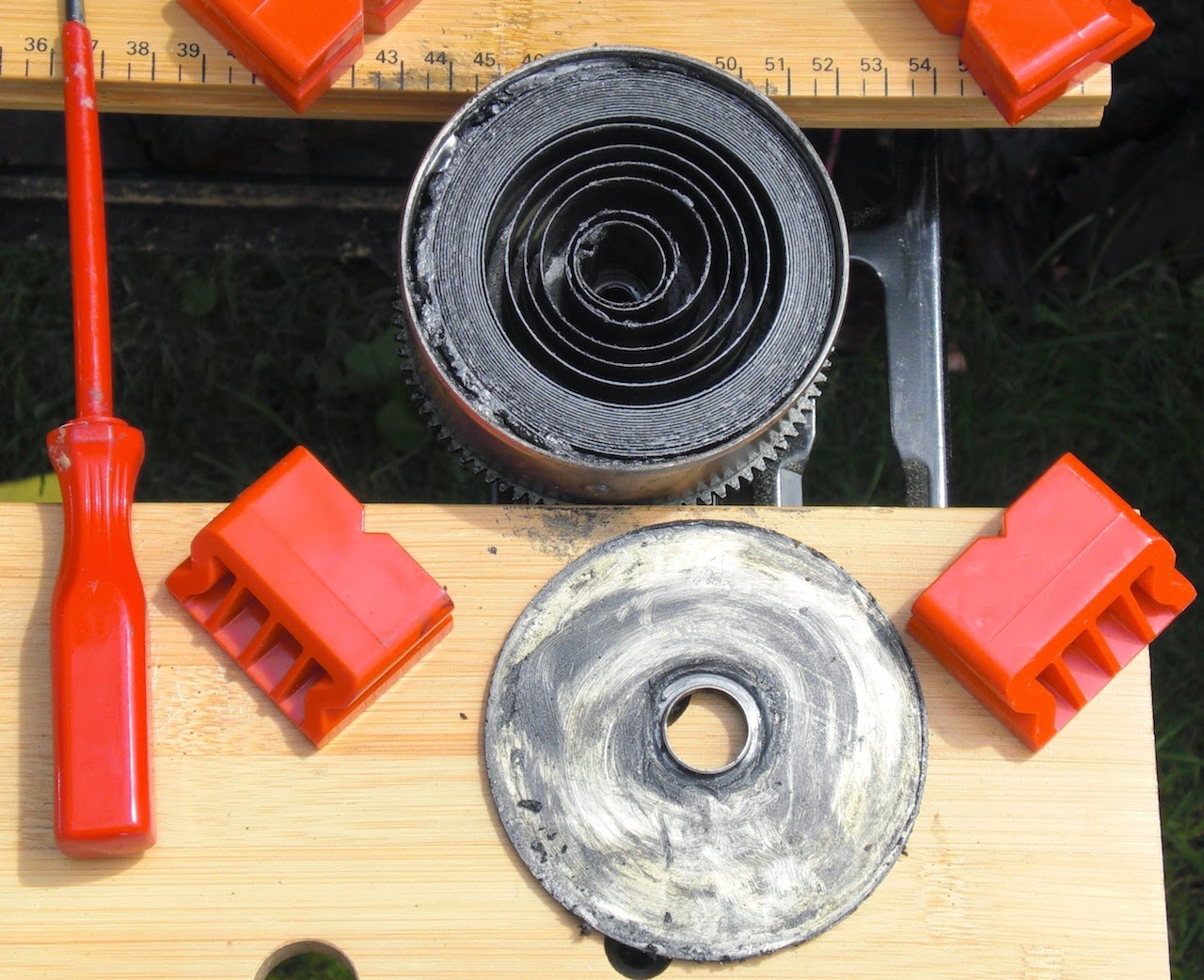 With the retaining spring removed, the lid lifts off. If it is stuck or glued tight with old grease, tap lightly from other side through the centre hole. Then the mainspring is revealed with its old graphite grease. This had indeed turned solid, more a coating of solid coal than graphite grease. 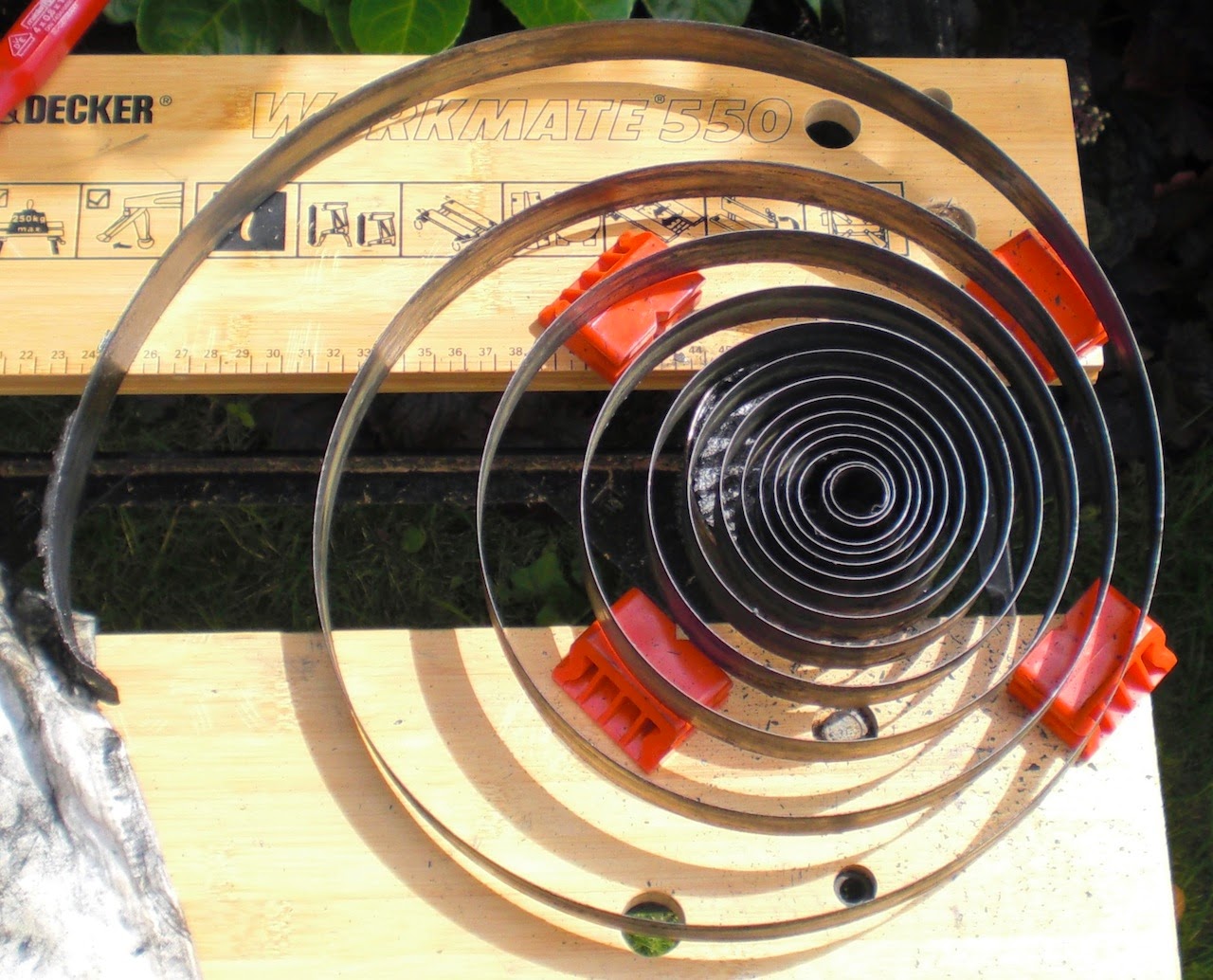 Hard to describe taking out the spring, there is a very clear video posted on Youtube that helped with this. Pull out at the centre and then pull out winding by winding until it starts to come free and then unhook it from the stud in the side of the drum. It's recommended to use long sleeved clothes and gloves. Do not let go of the spring. It is an inch-wide length of spring steel that wants to be a lot bigger than it is and may do so very quickly when let go of. Sharp edges would fly about. An extra cloth or towel to cover the work can be a good idea as a further precaution. 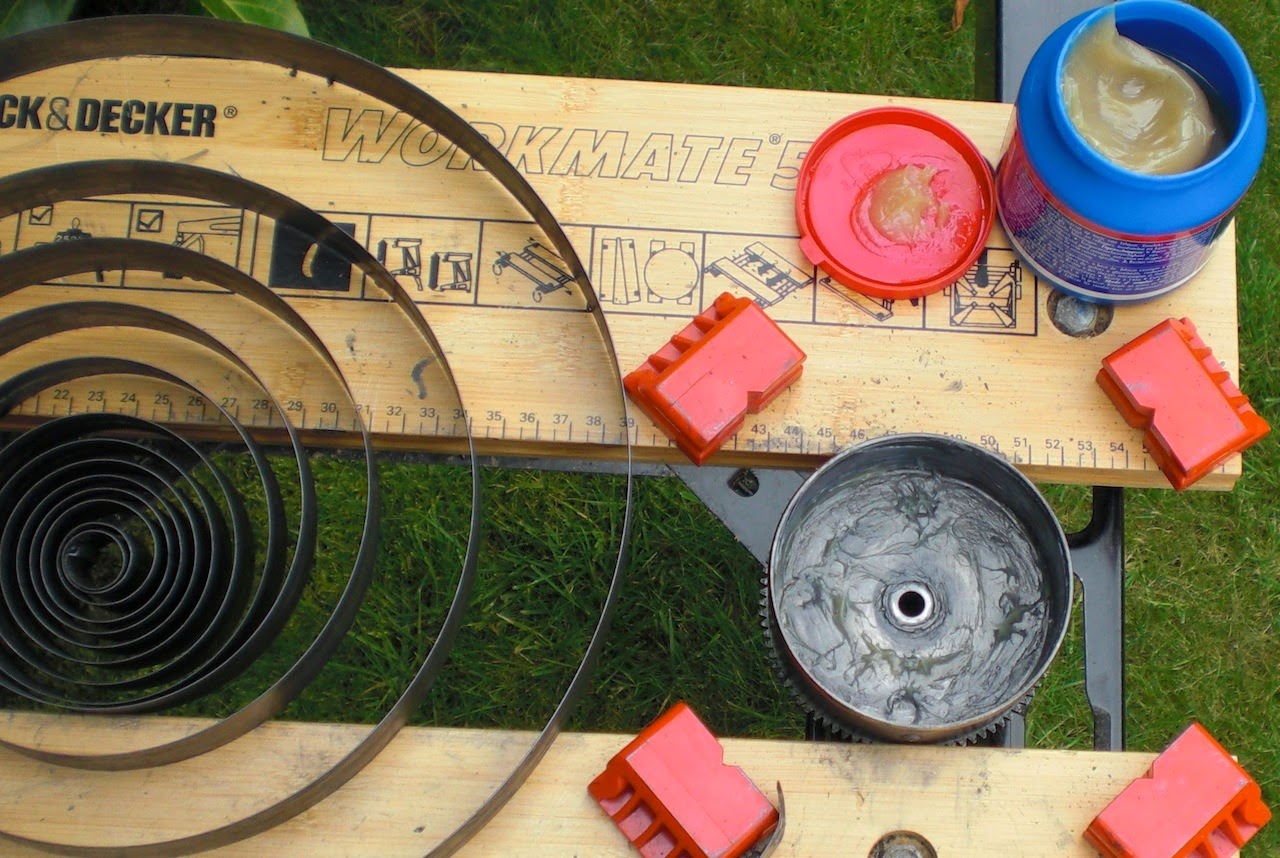 The spring drum can then be cleaned and a generous amount of new grease put in. Also the spring can be given a layer of new grease all over. Degreasing solutions didn't really work on the old grease and it literally needed chiseling away in places. Removing the solid black lumps from the spring takes some work, carefully chiseling off without damaging or scratching the spring. For new grease I've used regular (car) grease. For heavy loads a graphite grease would be the better product, but regular grease will do for a while I'm sure. 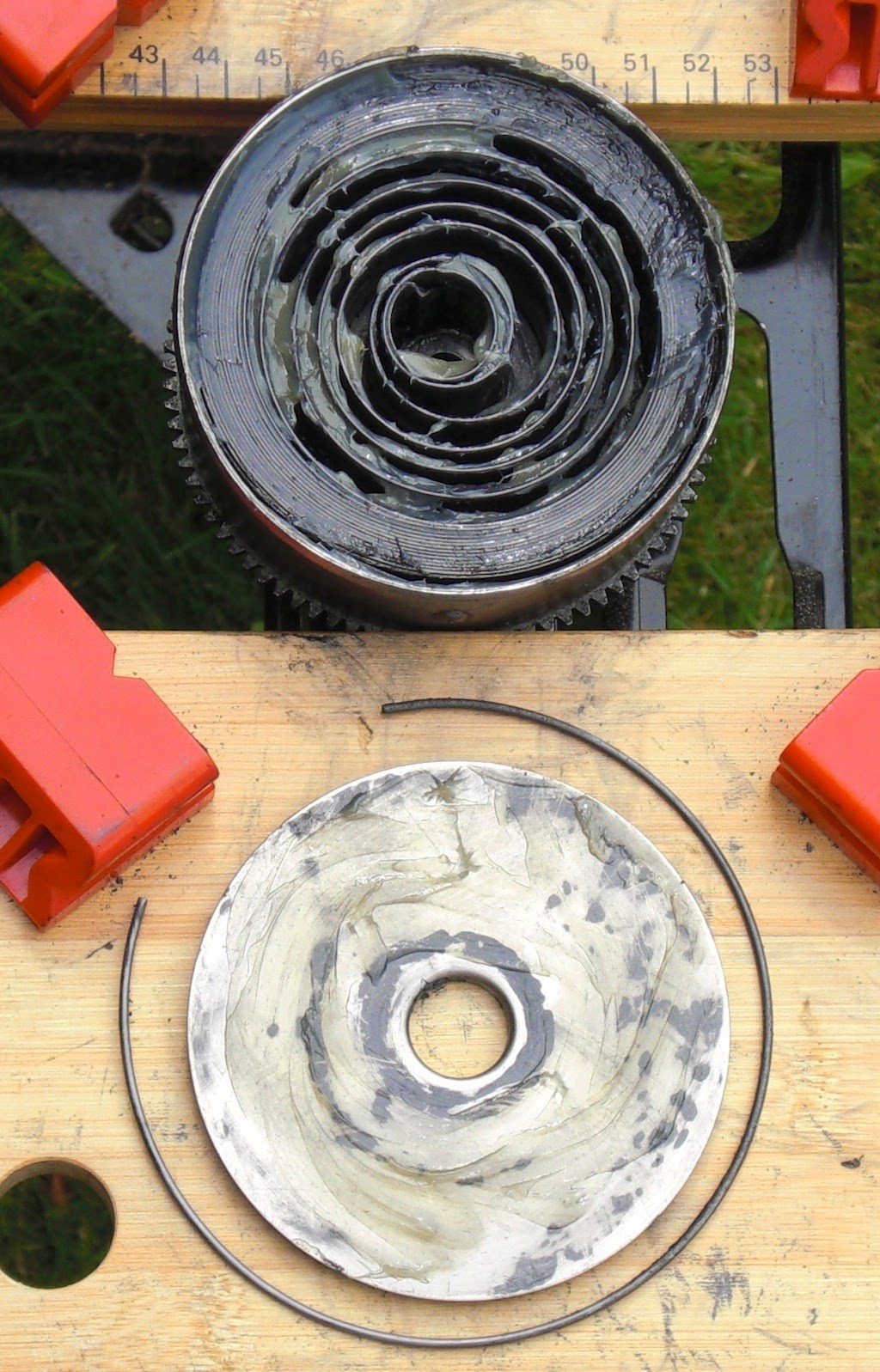 Put the lid back on and lock it into place with the retaining spring. Make sure the groove in the drum is completely clean and the retaining spring seated well into this groove or the ends will not meet and the spring will not fit. Again a screwdriver helps to push everything in place. 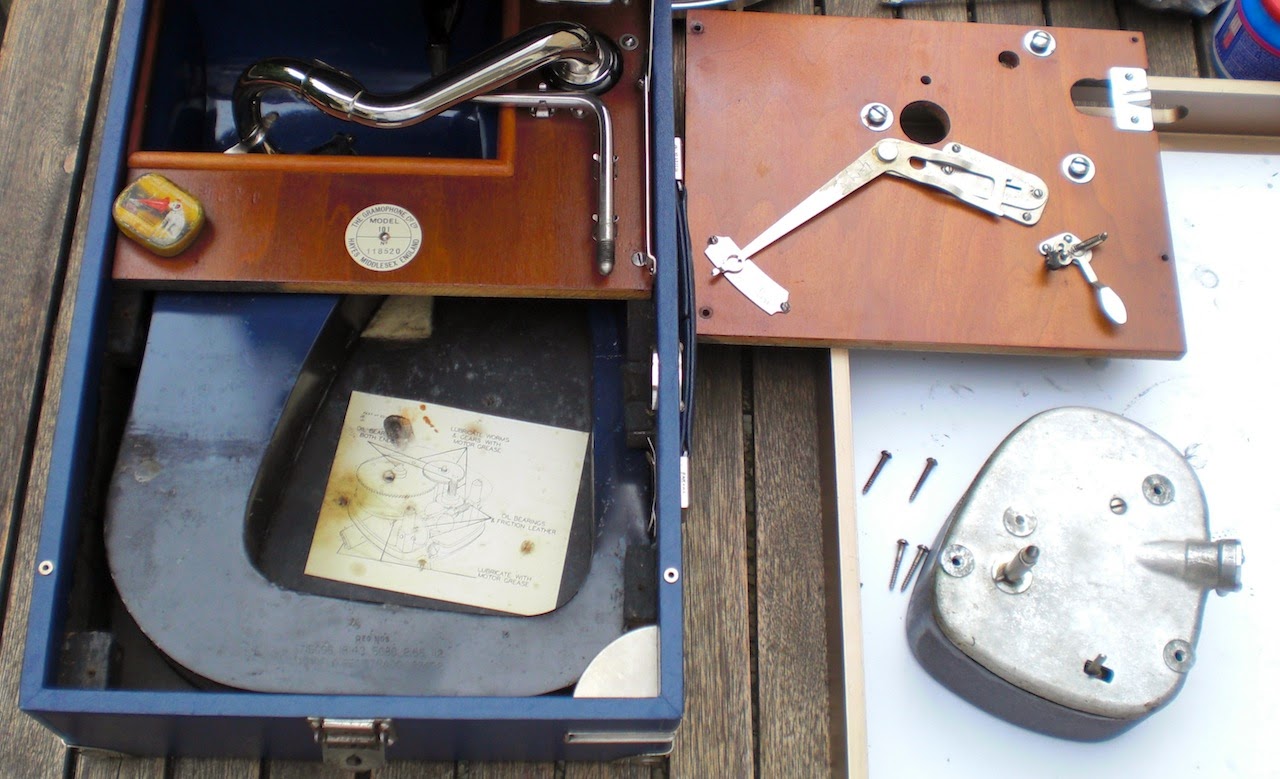 Then the reverse of the earlier steps to push back in the winding cog, place the whole drum on its spindle. Add intermediate gear and fix the base-plate again. Make sure the bearing washer under the spring drum is in place. (And the gears greased.) Close the motor with the cover. Then the motor can be mounted to the motor board again (if taken off it) and the motor board back into the machine. 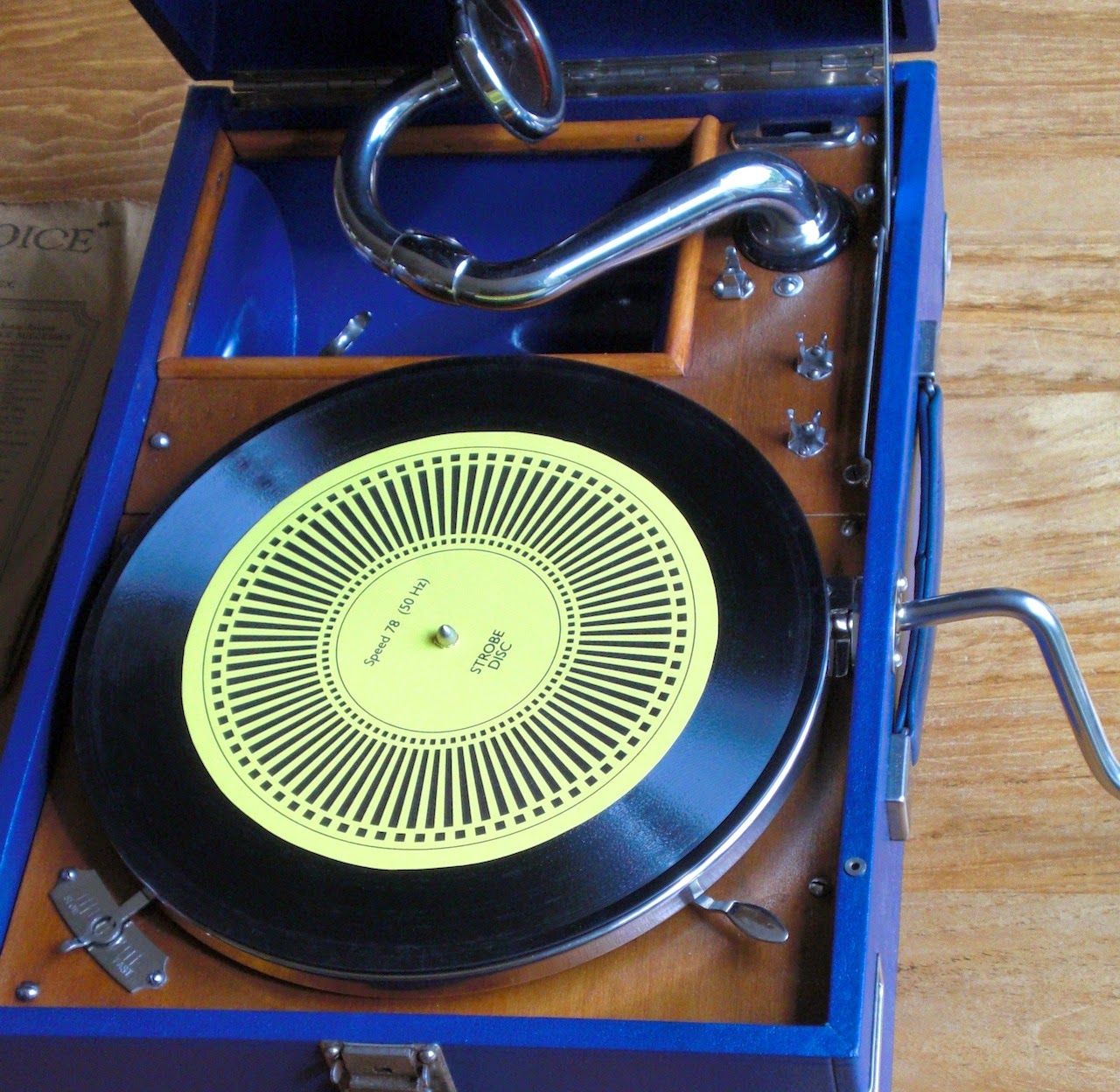 If everything went well and the spring has properly caught the stud and the winding cog, the motor can be wound up again. After greasing the gears and mainspring, the motor could be a bit stronger and the speed will need to be adjusted. With a strobe disc and a suitable light source that flickers at mains frequency (incandescent) the speed is adjusted to run at 78 rpm with the speed lever in the centre. From what I've read it is best to do the checking of the speed playing a record, to set the speed with a playing needle load on the motor. 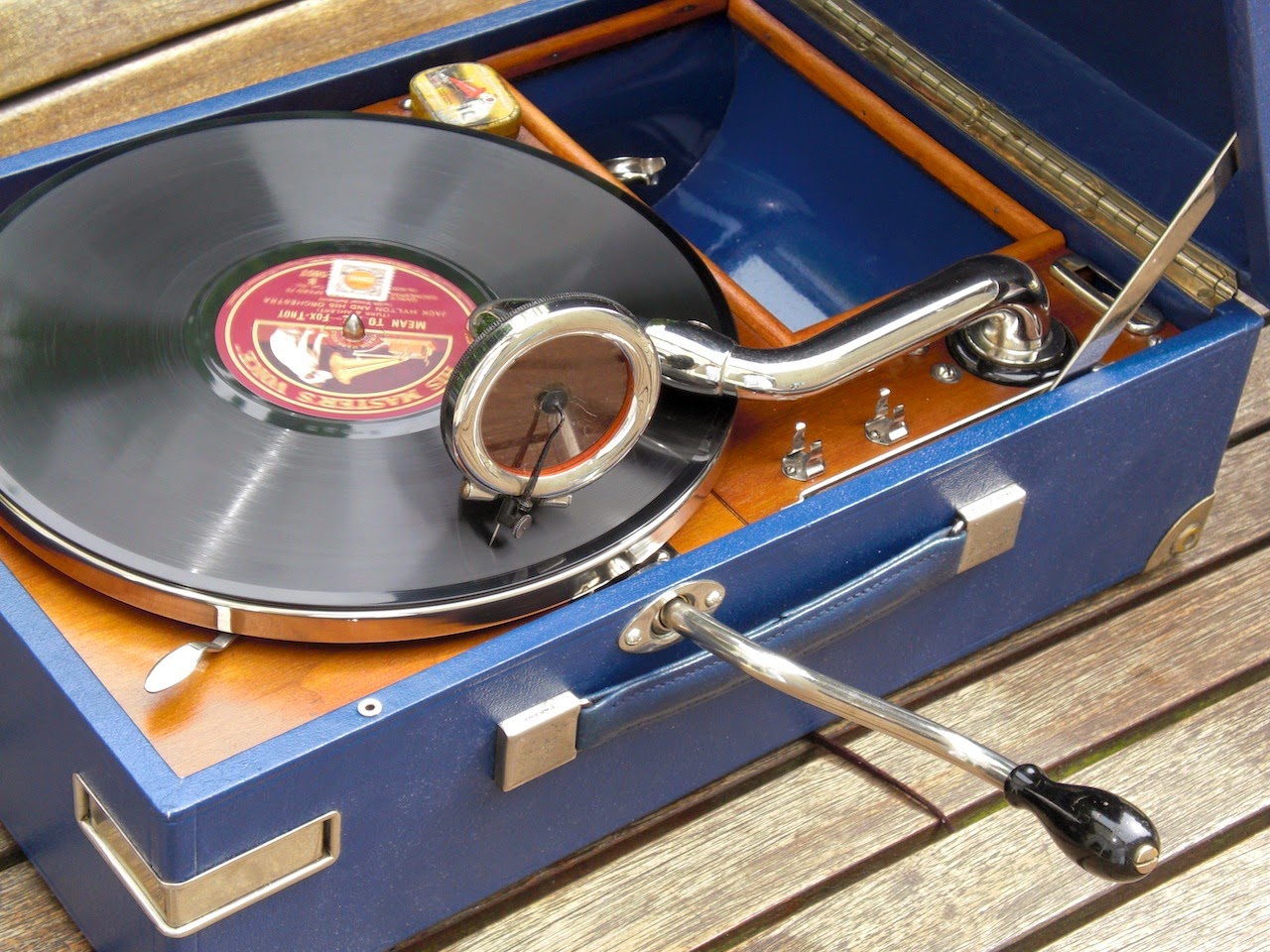 Now with new grease, this HMV 101 gramophone again plays a full side keeping proper speed. Probably not as strong as it was when new, but does work again. Can always fit a completely new spring later if it still proves too weak.

(Blue with wooden deck is not the original scheme, by the way. Only the black machines had a wooden deck. On the deluxe models this was also covered with Rexine, but couldn't resist sanding and varnishing the boards to have a wooden deck. Did keep the horn blue so may still cover deck with blue Rexine later.) 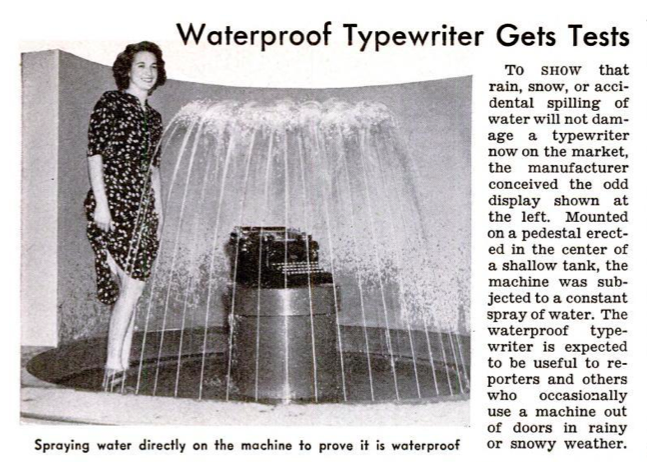 Right, so it can withstand being rained on...

How often does it rain in the office? How many reporters travel about in the rain lugging along a full-size standard?

How is this a major selling point? One that differentiates it from the competition in a meaningful and relevant way?

(Then again it would have been a fun display to make. That's as good a reason as any!)
Posted by RobertG at 11:58 PM 6 comments:

Online there are many and very varied examples of how to keep a machine or two on display (or more than two). Some hard to do, some less hard.

Just realized that the Billy Compatibility of a typewriter is an important factor for easy display. Having a depth that is less than about 30 cm makes it much more practical to keep it on display for a while. This would I guess be a factor for collectors in most countries that have large furniture stores from Sweden with often a whole aisle dedicated just to Billy.

For any next machines, the Billy Compatibility will be an added requirement. That keeps the Corona Four (I think) on the list and of course an Underwood 3-bank.

(More machines would be Expedit Compatible, have however no shelf-space of that type... :)
Posted by RobertG at 3:55 AM 3 comments:

Treated myself to an album. 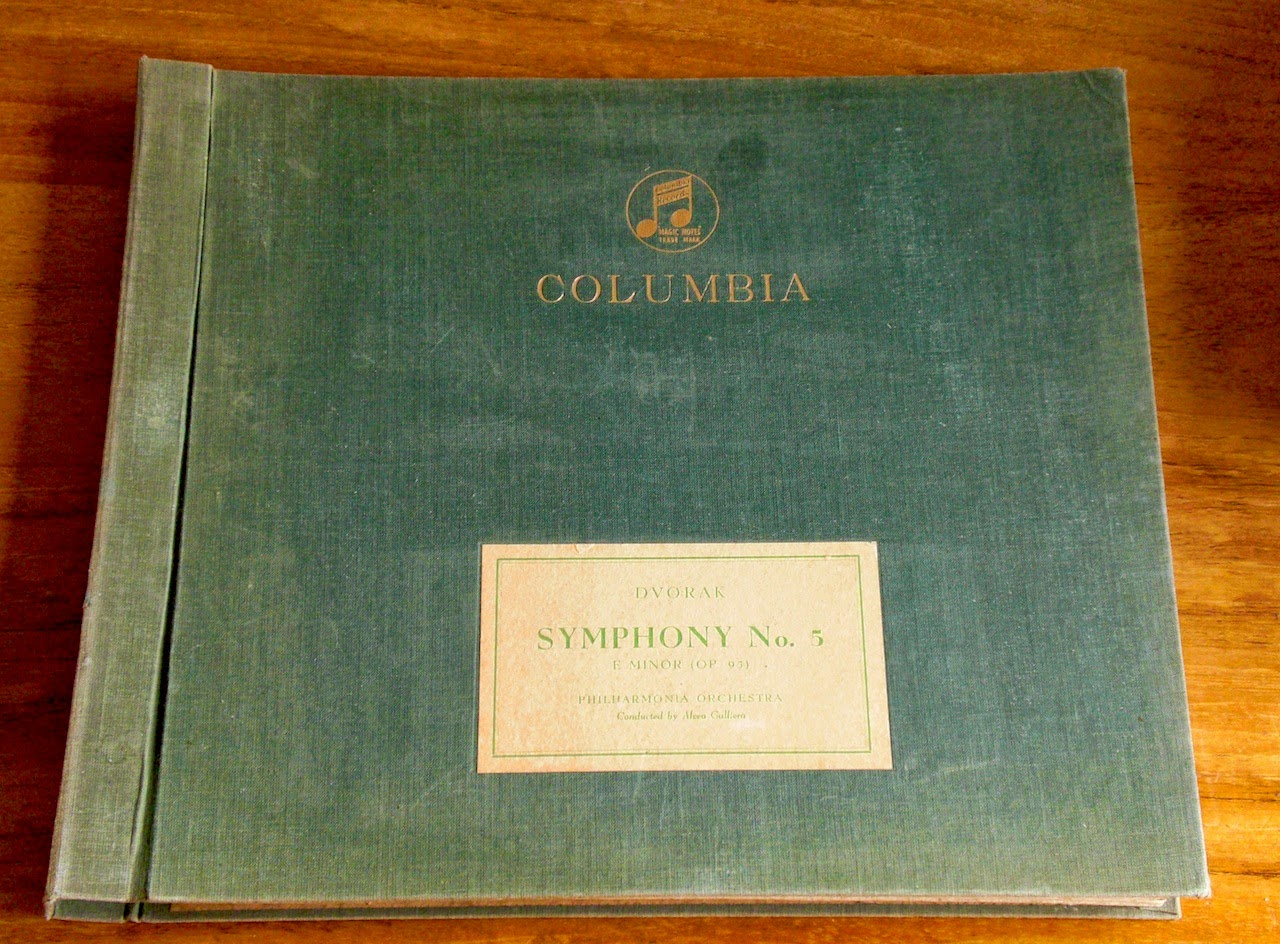 From our national online classifieds site, got it for a fair offer and it arrived well packed in the mail. Even though the records are protected by the cardboard sleeves of the album, with an older worn album they can get caught in the spine and easily bent and have bits broken out. The cover is a bit faded, but everything is fine and the 5 large 12" records really look like they are new.

One of those unexpected questions that happen was the title. This is Antonín Dvořák's Opus 95, 'From The New World' in E Minor. The label on the album clearly states this as Symphony No. 5, but a quick search on the internet makes this Symphony No. 9.

Some more reading on the shelves of the vast and varied internet yielded the answer, there has been renumbering going on. The composer himself was 'flexible' on his Opus numbering to start with, but in Symphony numbering this was his No. 5. Then after the composer's death four more symphonies have come to light, later leading to successive renumbering to order of writing. The Symphony No. 5 was first renumbered No. 8 and from the fifties on now known as No. 9.

This album is of a performance by the Philharmonia Orchestra from the late forties. The tax code in the run-out makes it '46, the Columbia D.X. series numbering suggests '47 and the tax stamp on some of the records make it '48 - we'll make it 'late forties'.

Being a relatively late shellac recording, it has quite a bit of volume when played on an acoustic gramophone. But then, this is music that really should be played loud :-) 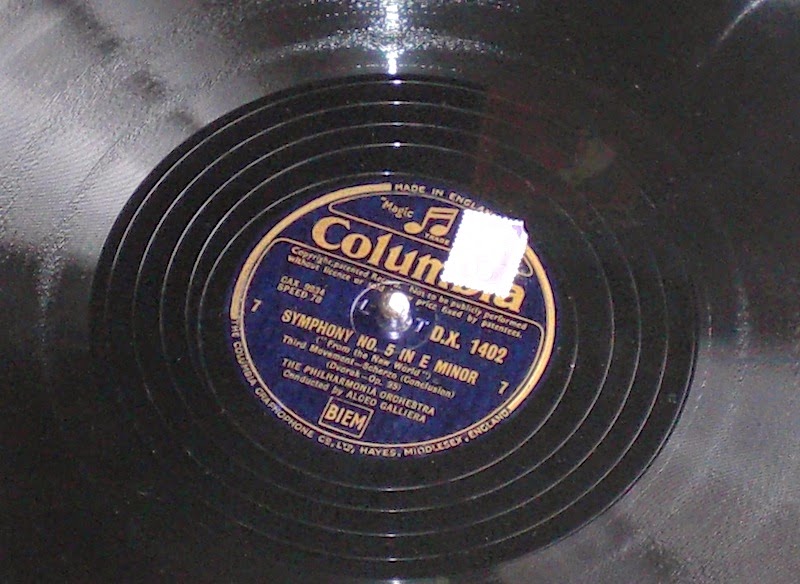 Listening to a longer classical piece on 78's is more active than e.g. playing a CD or an MP3. About every 6 minutes or so the record has to be changed and the gramophone re-wound. Another thing is that you can see from the grooves very clearly when a loud section is coming up.

(Oh, and remarkable how the term for an 'album' has stuck around.)
Posted by RobertG at 7:36 AM No comments: