Somebody just had to already have tried this

When something can be imagined, then there is bound to be somebody that has actually tried it.

And so it is with the suggestion that a typewriter could perhaps be constructed from Meccano. This fine example is shown here on a blurry scan from the 1932 book of prize winning models. 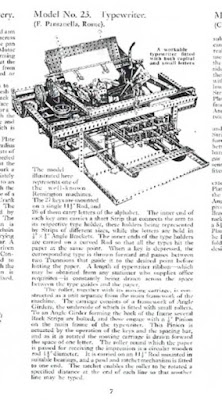 Meccano could actually be very good to show and experiment with various methods of creating a typewriter linkage from keypress to swinging typebar. The machine constructed by Mr Pantanella does go much further however.

Almost like creating a model of the Notre Dame from matches - definitely taking it to another level...
Posted by RobertG at 10:13 AM 3 comments: 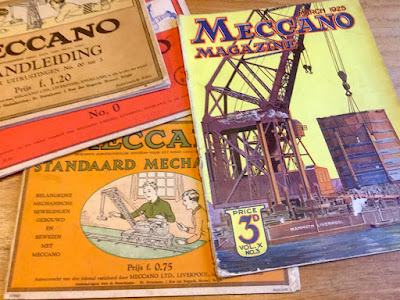 Included in the instruction book are already a few pages with general engineering mechanisms. Instruction book is actually a bit of a misnomer; these booklets are rather a collection of pictures of models without any instruction on how to build them. Finding out how to construct these models is explicitly left to the ingenuity of the builder, to foster and promote his mechanical prowess.

Included in the larger outfits and also available separately was a booklet containing 'standard mechanisms'. A booklet complete with a wide variety of mechanical functions and how these may be achieved with Meccano parts. Explicitly advertising it as proper mechanical engineering in miniature. 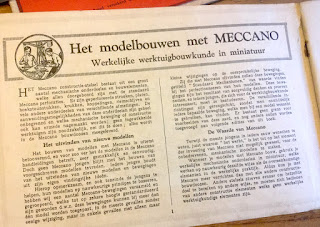 These more complex mechanisms in this booklet fortunately do have descriptions of their workings and some hints on how to construct these.

To offer more inspiration and provide a steady stream of mechanical engineering input, the Meccano company published a monthly magazine. This copy of the March '25 issue has a report on the assembling of a large floating crane, also shown on the front cover. 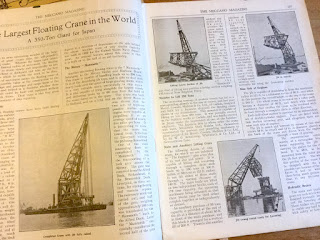 And e.g. an article on copper. This does have me wondering how riveting this would have been to the intended readership, even then... 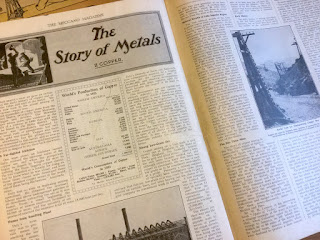 Just for viewing the colourful covers - well worth a browse :-) 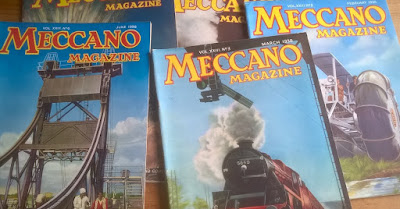 Posted by RobertG at 5:30 AM No comments:

The tinkering with the small screws of the Meccano has grown a bit - so has the collection of parts. Even though there is a wide variety of parts to build many different types of models and mechanisms, there was one part lacking that I would have expected. Maybe it is an expectation from working with the older typewriters; the Meccano system did not have rubber feet.

All nice and well when building on a workbench, but having rubber feet would be nice to prevent a small model from marring a tabletop. And as with typewriters, prevent models from skidding all over the table. A pulley fitted with a rubber tire could be used of course, but wanted something more compact - like a collar or bushing.

So we got some made.

With the easy availability of 3D modelling software and easy access to very affordable 3D printing in rubber, getting custom feet manufactured is not only doable - it's probably even less hassle than finding the right part in the hardware store. A quick design was made in Sketchup for a half-inch round by a quarter-inch high foot and a set of these printed locally via 3DHubs in black Ninjaflex at 100 micron layer-height. 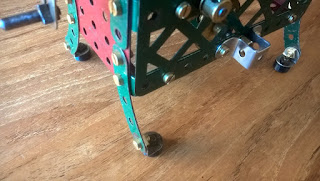 These simple rubber feet can be bolted onto a plate or to the angle bracket that Meccano often show as 'foot' of a machine model. Using a longer bolt, adjustable feet are possible too. 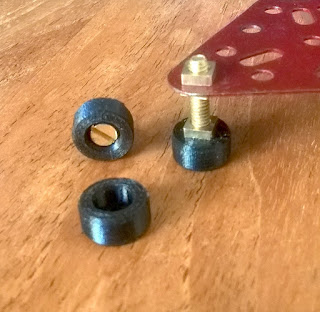 The model, trivial as it is, can be downloaded from Thingiverse here.

(The barrier to replacing broken or missing rubber feet on machines is getting lower and lower :-)
Posted by RobertG at 7:05 AM No comments:

Before there was colour, there was monochrome. Same with Meccano. Before 1926 or '27 the parts were not painted, but nickel-plated.

Clean and shiny, these date to around 1920 and would have come with this instruction book. 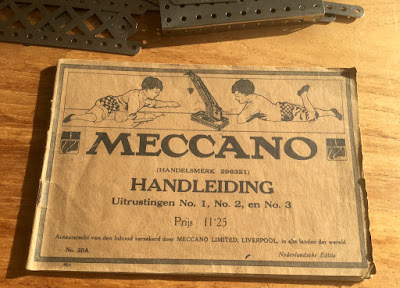 Localised in Dutch, also sold separately - quite expensive too at Hfl. 1,25. (An English-language version of the 1919 edition of this manual can be found here at the very extensive site of the New Zealand Meccano Club.) 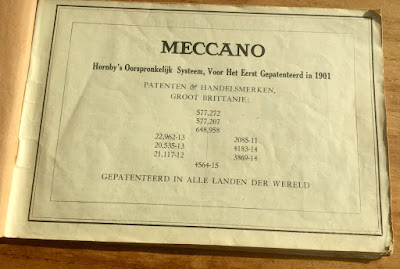 The Meccano system was seriously protected by patents, both utility and design patents. Unlike English, Dutch has evolved quite a bit over the past decades and this manual really illustrates this. Its phrasing and spelling looks very quaint to modern eyes ('ye olde'). Notably odd spelling of Britain in the title page. 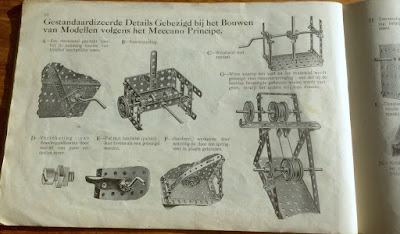 Before being published as a separate book of standard mechanisms, the instruction book included a section with some basic standard mechanisms. (Also some odd printing errors in the text; printed in England, a Dutch-speaking printer would have caught word-contractions and similar mistakes.)

The range of parts was already extensive (and about to expand a lot more during the twenties and thirties). Some parts were only available as separate spare-parts and not included in any outfit. The given prices again illustrate this was not cheap.

Despite the high price, or perhaps because of it, the reader is cautioned against considering buying anything that is not the genuine article. On the back cover of the booklet is explained that Meccano is more than a mere toy! It is true mechanical engineering in miniature. Any imitation is not following sound engineering principles and thus would be bad for the development of the child. (Oh dear.) 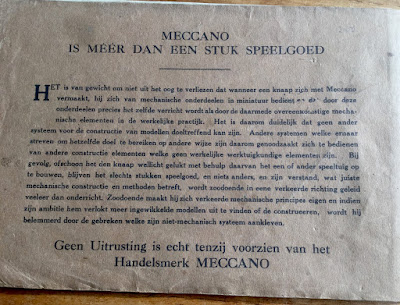 To be fair it actually was the technology of its day in miniature, arguably the Arduino of its time.

Still it is an enjoyable toy, still :-)
Posted by RobertG at 5:28 AM No comments: