The final crash of civilization and Mozart

"It is natural enough that when the final crash of our civilization is being constantly and confidently predicted on all hands as imminent, or already begun, people who have a regard for the arts should turn to those amongst the great who can most effectively provide an anodyne." 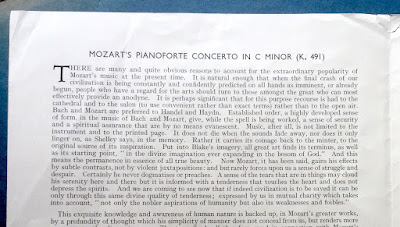 Now that's a sentence you don't see too often, especially not on the booklet in a music album. After the introduction there follows analysis and musical comment on the piece itself. 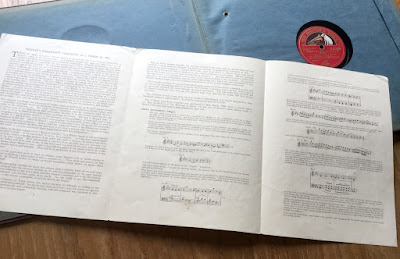 It is the opening paragraph of the accompanying analytical notes to a classical album with a Mozart piano concerto. Leaflet neatly tucked in the album inside, record sleeves with handy rivets preventing the disks from sliding into the album back. 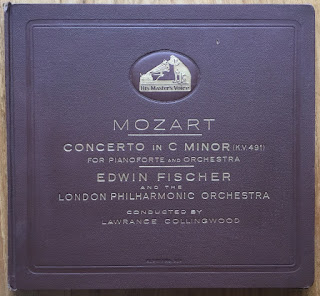 (Still very good to listen to, with or without the surrounding crash of civilization...)
Posted by RobertG at 2:50 AM 1 comment:

Some record label sleeves from the thirties. 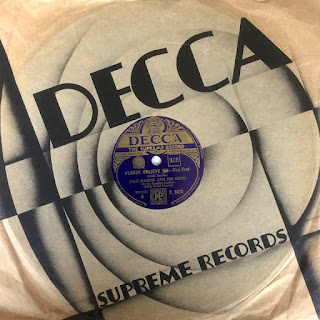 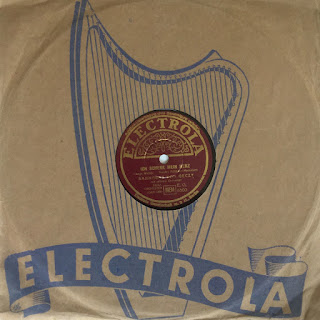 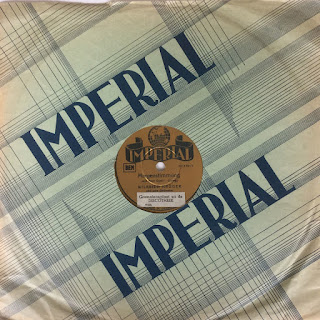 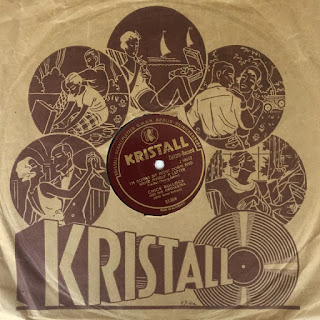 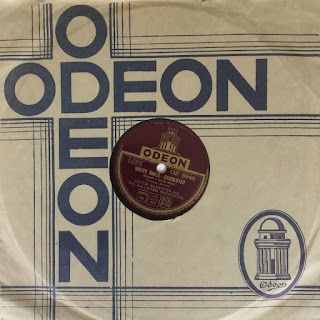 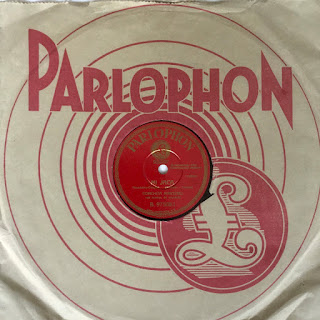 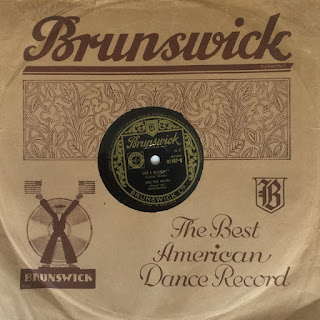 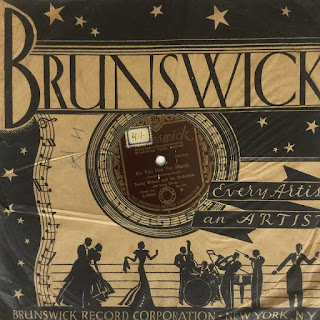 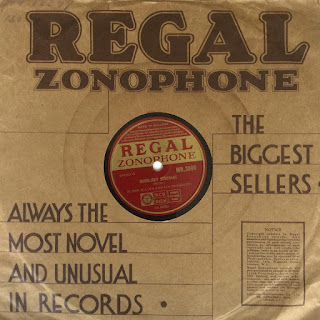 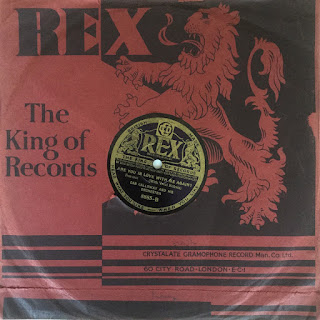 First step towards a repaint; get all the parts to be painted off the machine. 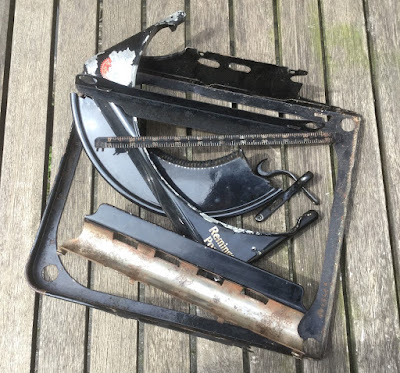 It really helps that this is not the first Remington Portable #2 typewriter I've tried to take apart. It means that by now I know what screws to undo and when (having explored all possible wrong options on the other machines first). When you know what to unscrew, it comes apart quite easily.

Important preparation is to put drops of oil on all the bodywork screws and especially on the platen-knob screw. Leaving this to creep in for a couple of days helps to loosen. On this machine it then all came apart without any mishaps. Platen came off readily. Removing the stop-screw from the carriage base of the machine allows the carriage to slide off easily. The one item that had me stumped on the previous attempts jumped out clearly now; remove two pins (nails) at the bottom of the removed carriage and the paper tray drops off. 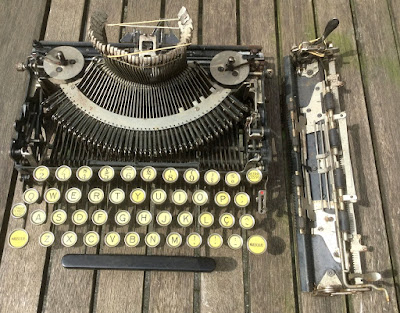 This leaves the core of the machine exposed for a good cleaning. The mechanism is already surprisingly clean and rust-free, considering the general state the machine was in.

Now to explore how to remove the old paint, almost certainly to be nitro-cellulose lacquer. Will be giving this a try with some acetone...
Posted by RobertG at 11:51 AM 11 comments:

Hard platens are a long existing issue with typewriters, with solutions being sought. 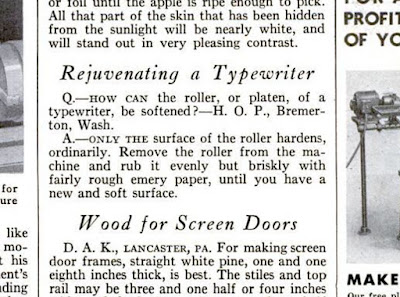 (From the May '35 issue of Popular Science Monthly)

After all these decades, it may of course not merely be the surface of the roller that hardens.

One summer: America, 1927. That's when this Remington Portable typewriter was assembled in Ilion, NY. It was made for export with a Portuguese (?) language keyboard and somehow it made its way to Holland.

Eighty-eight years later it was listed for sale online with a single fuzzy image. Just on the off-chance I put in a low offer; it looked like a machine that I wouldn't feel bad about trying a re-paint on. Bit of a surprise when I actually won it. Bit of a shocker when it arrived to see how bad it actually was... 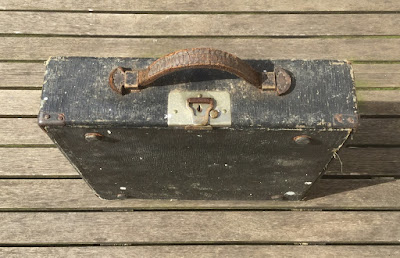 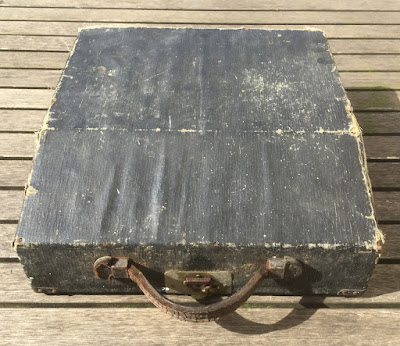 Surprising the case even made it through shipping - it had been covered with cardboard and not in a box as such. A severe case of damp. Much of the plywood has de-laminated, the leatherette is damaged and loose. Amazingly still the intact carrying handle. 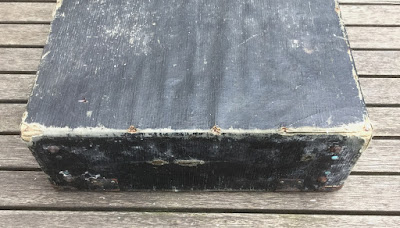 It has received some knocks, the back of the lid is smashed in and cracked. The whole carrying case still holds together, mostly from sheer force of habit.

The typewriter itself then. Luckily the case was much worse than the machine itself: 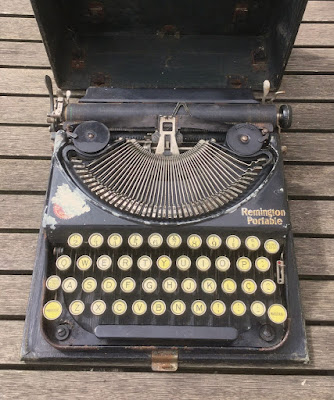 The machine itself indeed as was advertised with some paint loss. The little Remington Portable of the 1920-ies is not a rare machine and in this state I won't feel bad about doing a re-paint. 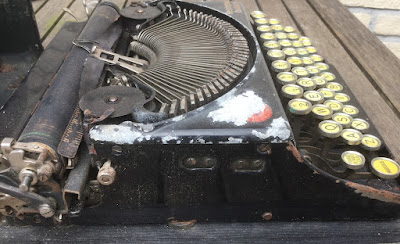 Not much left of the decal, rust even on the typeslugs. 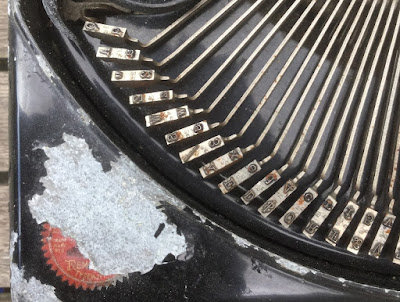 The keyboard has some unusual characters. Very unusual for Holland, that is. The seller was not able to shed any light on the machine's origins. Now how do these (probably) Portuguese machines end up in the low countries? 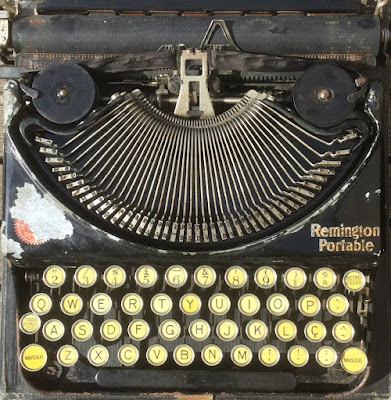 This one has the extra plate at the back to (I guess) protect the mechanism. The feed rollers are all fine. The platen is pitted, dirty and hard - not the original platen though, but marked in green text as a Continental replacement.

Still works! A bit stiff at first, the typebar lifting mechanism was jammed and needed some coaxing up, but the machine still works. A bit of oil on some spots was all it took then. This is another massive credit to the people at Remington who designed and built this amazingly compact and full featured machine. After probably decades of neglect and really bad storage conditions it still functioned pretty much as designed. 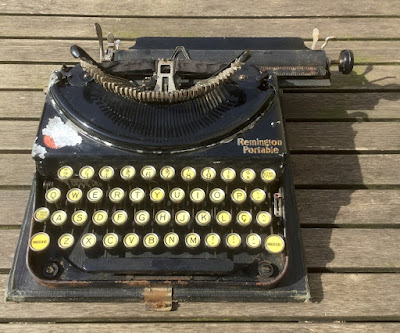 It is a 12 cpi machine - surprise. Shouldn't have been surprised really, just hadn't imagined the Portable being made with anything but 10 cpi type.

Types a treat, quite smooth still.