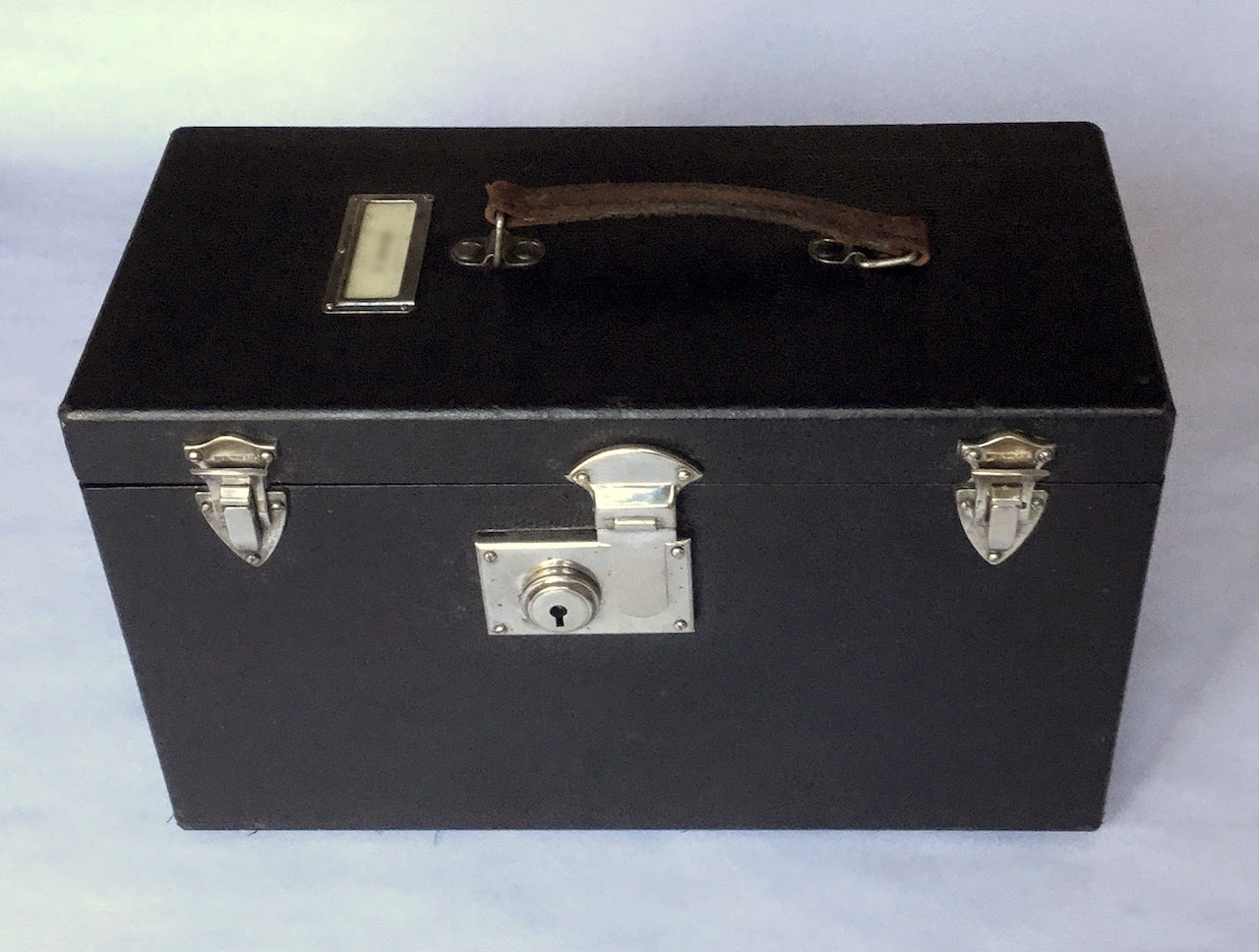 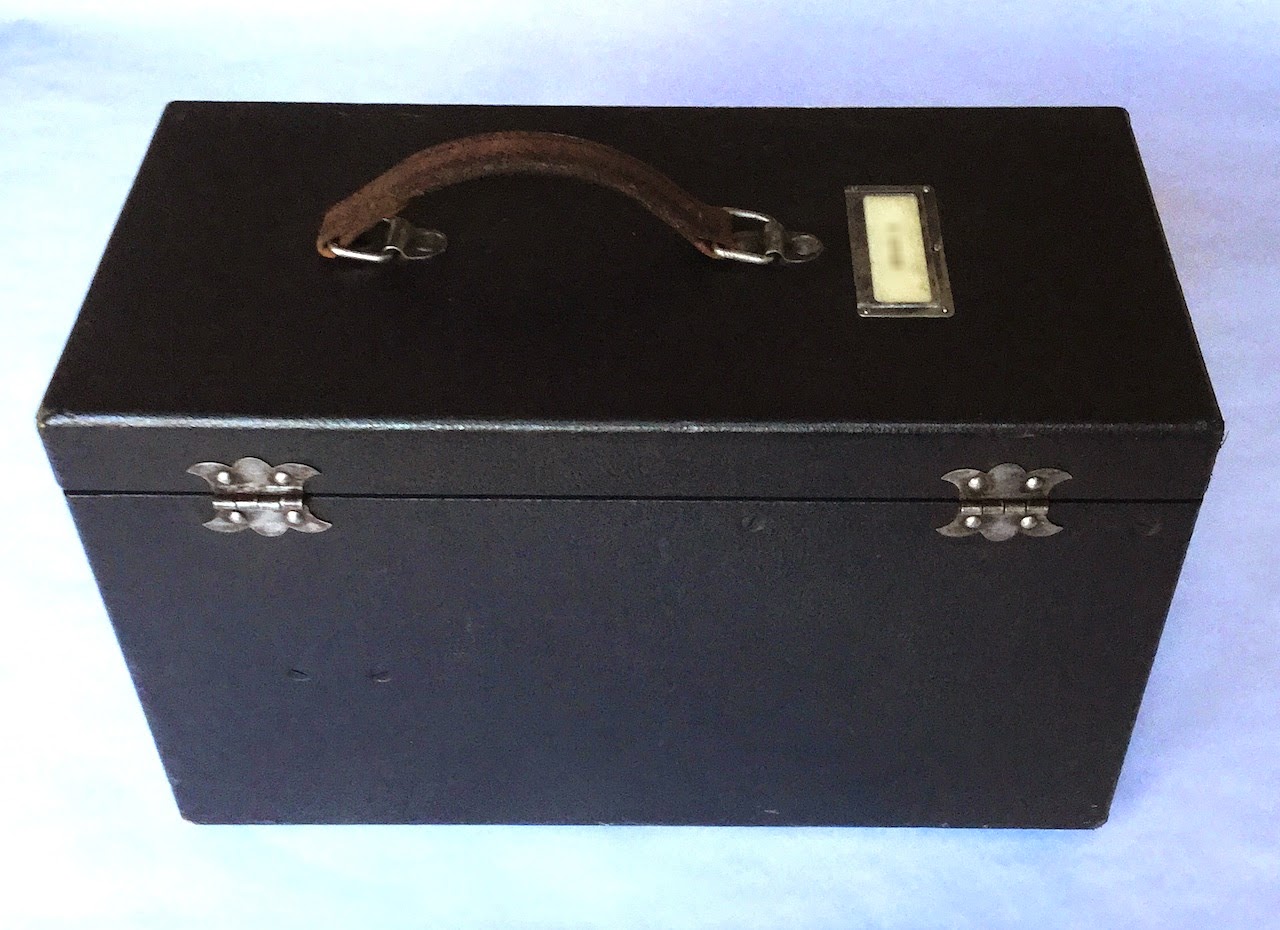 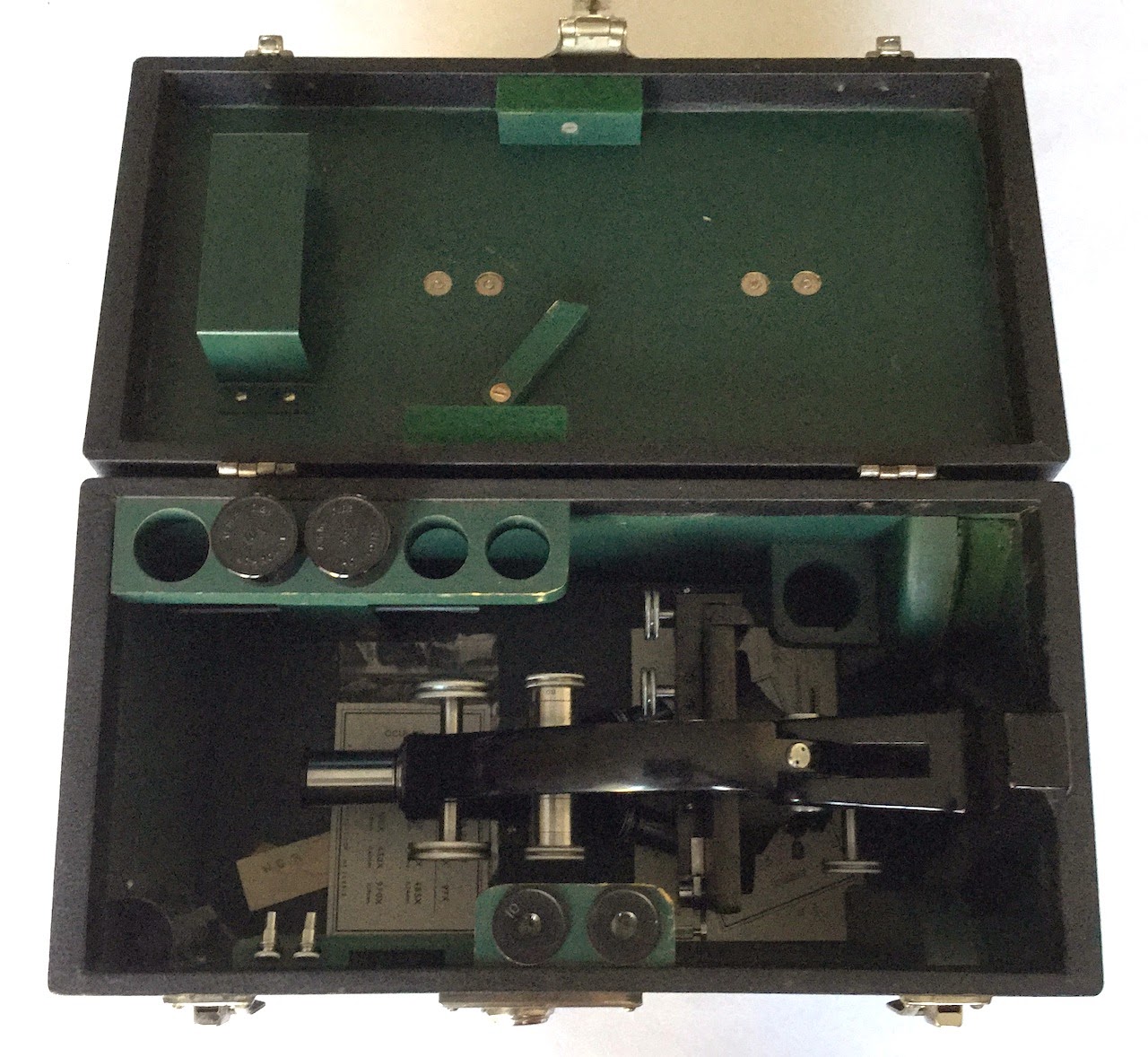 A Bausch & Lomb 'medical' microscope. Had been on the look-out for a while for a nice instrument, usable and of the period. Not for any particular make, but this B&L instrument came available and pick-up could very helpfully be arranged with the seller.

This specific model of microscope turns out to be quite common in the US, but is extremely rare over here on the continent. The vast majority of instruments here of that period are of German makes, but in this case a medical student chose to buy new an imported Bausch & Lomb instrument when starting his study in Utrecht in 1938. 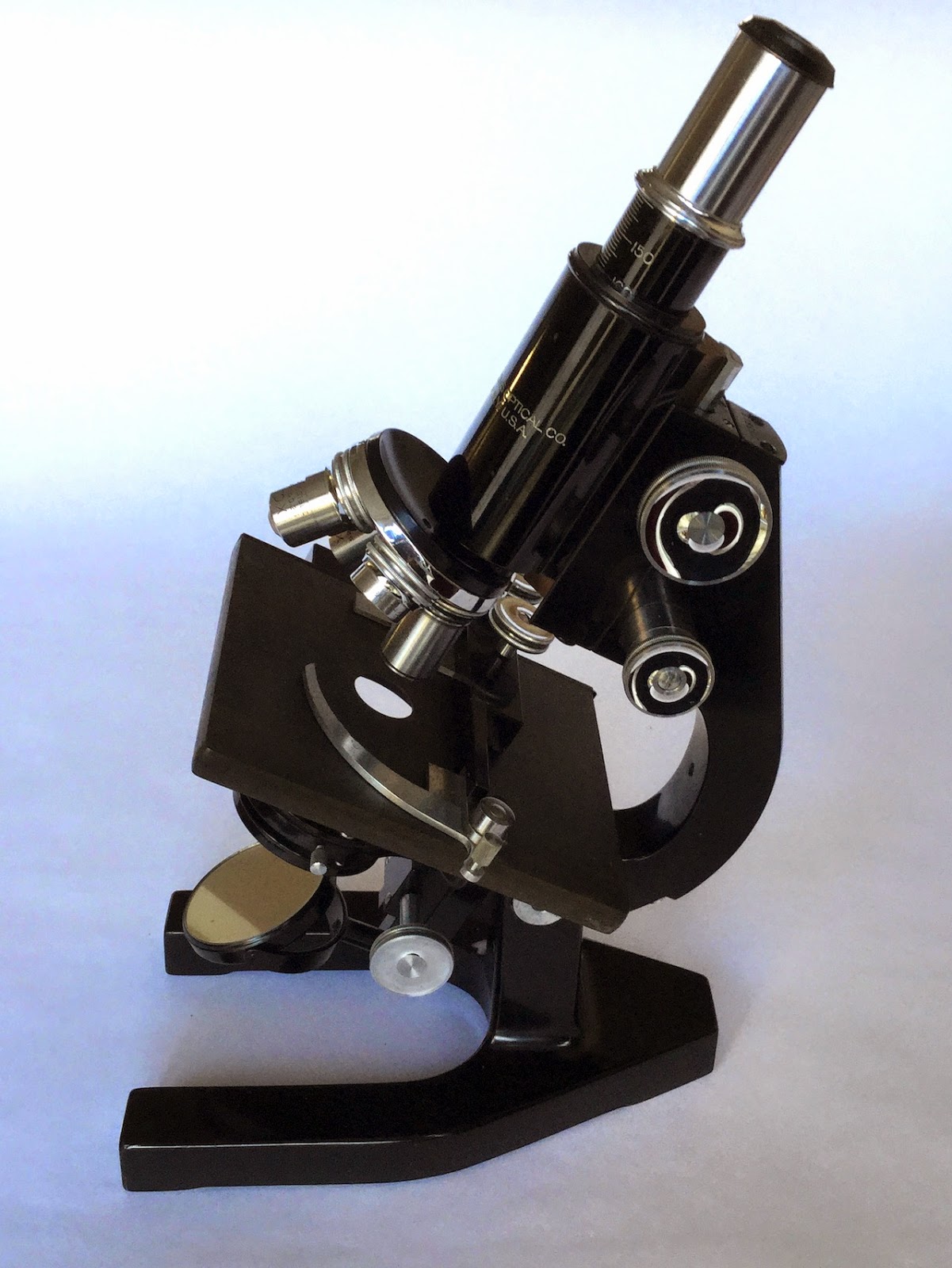 According to online serial number lists, this makes it manufactured in 1936. Still works fine!

A new project recently arrived; another analog device in a black case. 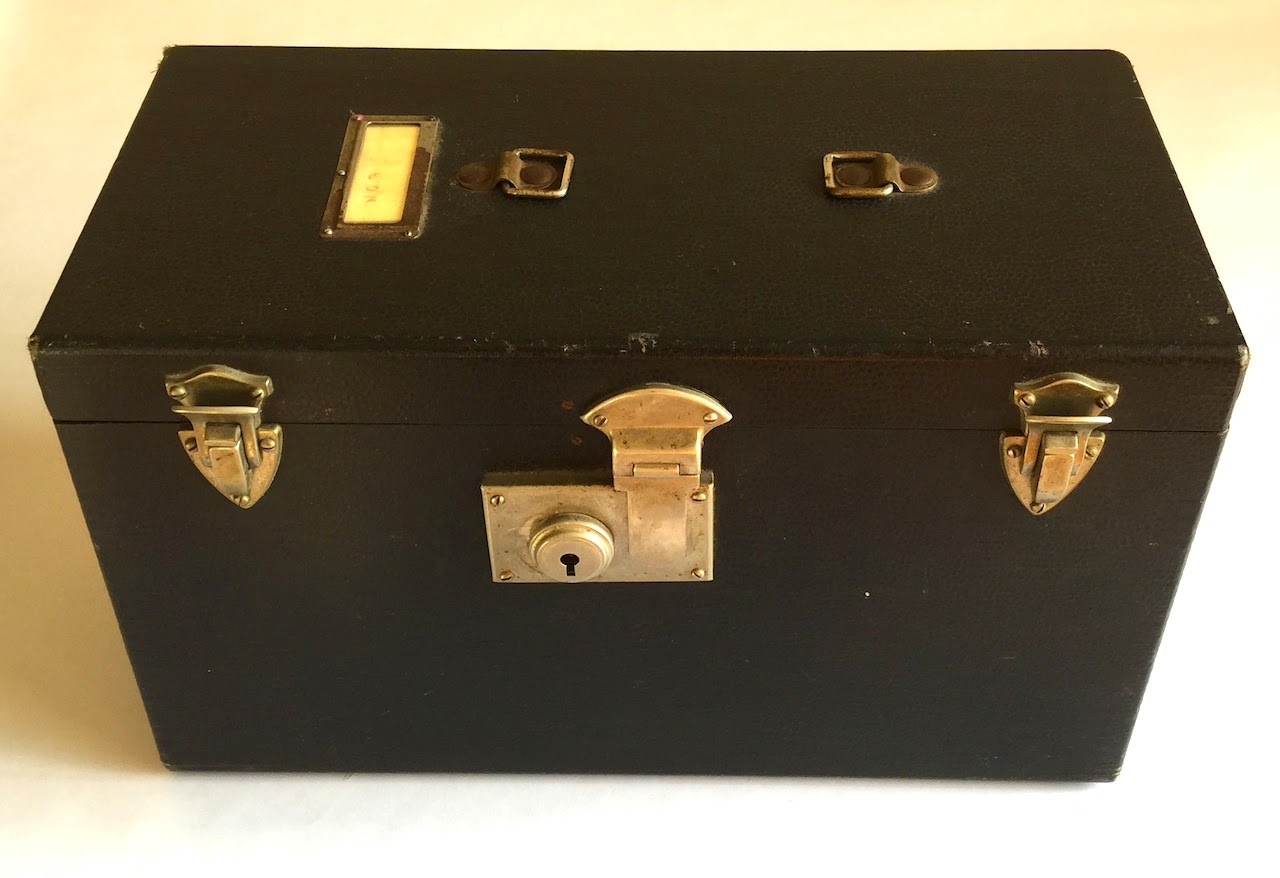 Indeed, not a typewriter :-) 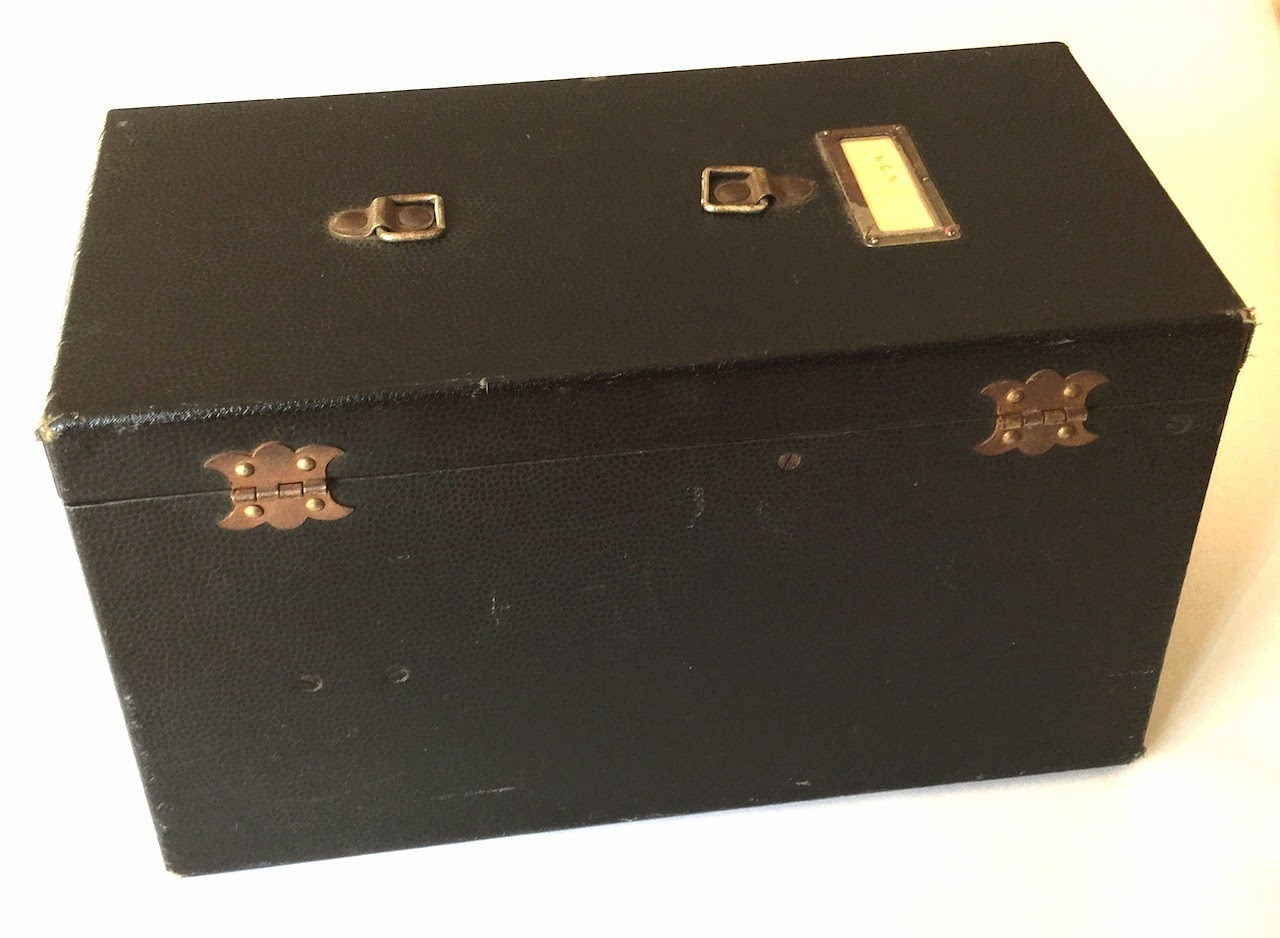 Case already cleaned and polished - new project!
Posted by RobertG at 11:36 AM 5 comments:

A while back I got an old, single-sided Caruso record. These are not rare and not extremely valuable, but they are old. In this online and connected world a lot can be found out about such a simple old disk, adding a bit of history and context. 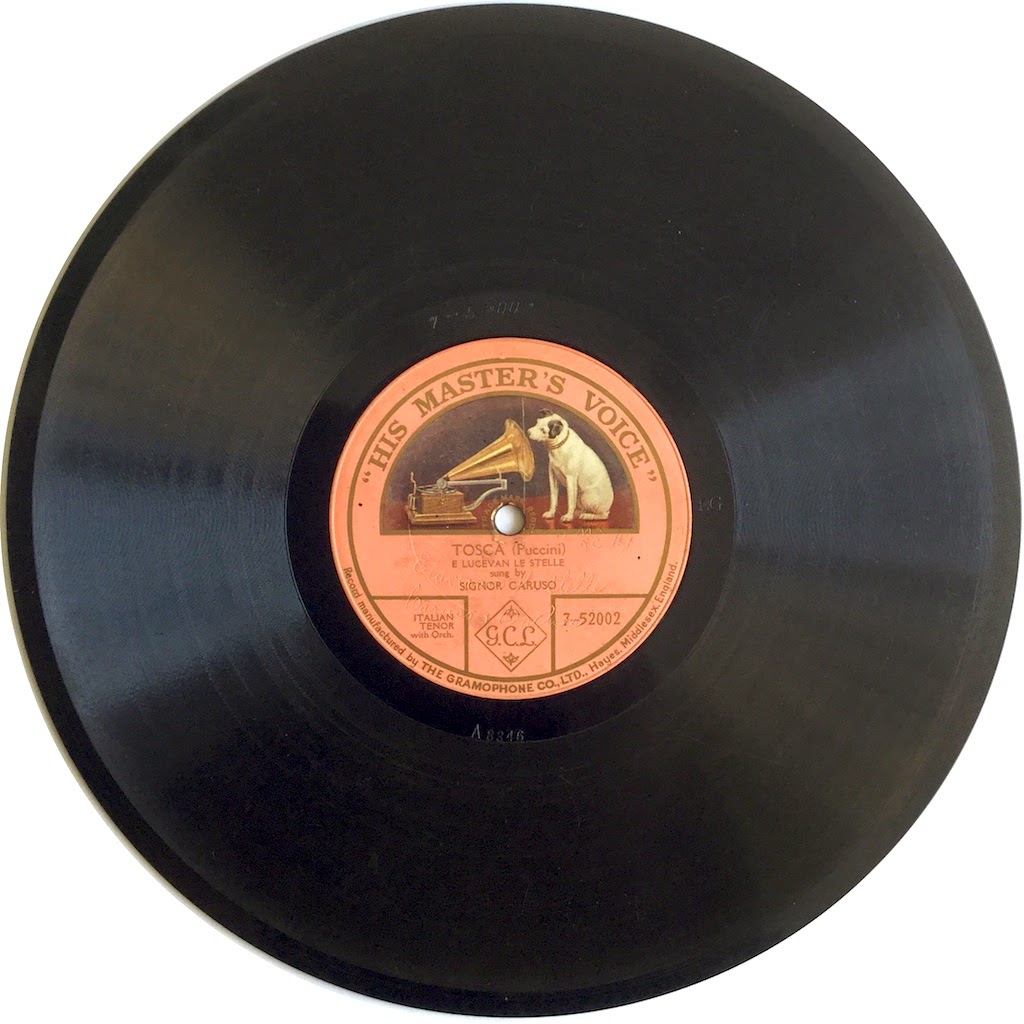 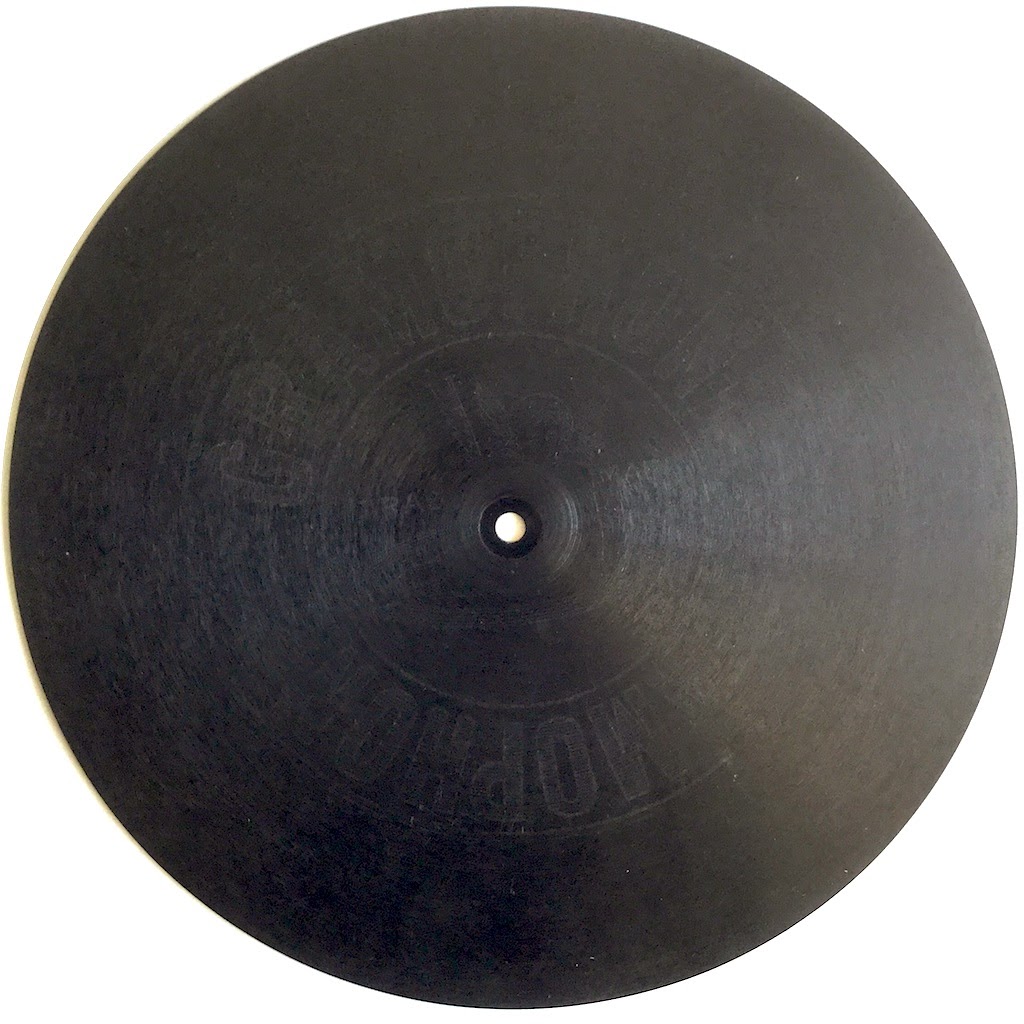 The label already gives much information. Of course the artist, world famous tenor Enrique Caruso, the music (E Lucevan Le Stelle from Tosca) and the composer (Puccini), but also the manufacturer and catalogue number 7-52002. 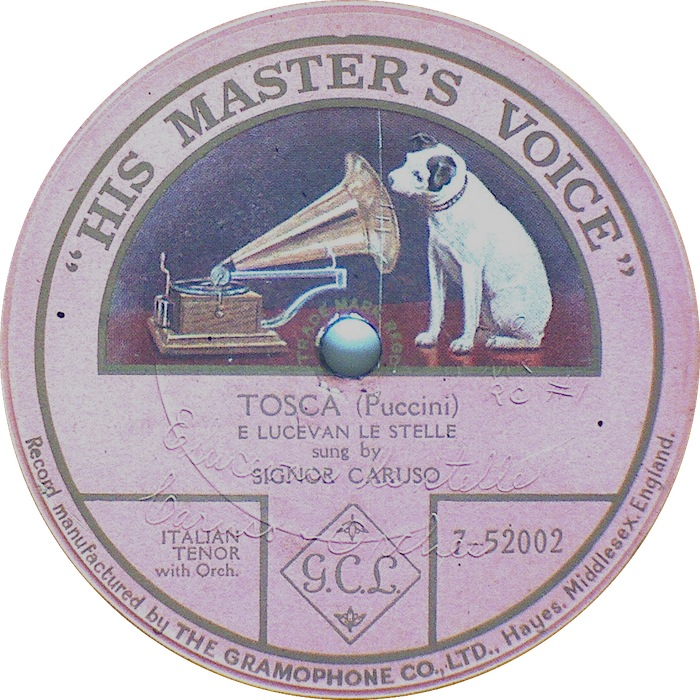 Being single-sided of course already dates it to the early 20th century, though companies persisted in making single-sided records even into the twenties. The Gramophone Company (briefly The Gramophone & Typewriter Ltd.) started using "His Master's Voice" as a label with the Barraud painting of the dog listening to a gramophone from 1909 onwards. Famous artists for a brief period got their own label colour; for Caruso a lavender label. After around 1920 this was done no longer and the colour would indicate the series (e.g. classical or popular) or price-range.

Even more precise dating of the record is possible, because much of the original ledgers of The Victor Company have been digitized and made available online! This HMV record was made from a Victor recording, like many HMV records. This particular performance was recorded in Camden, NJ on 11/6/1909, the matrix number 8346 is scratched into the runout of the matrix. Notable is that the Victor books state B-8346 as matrix number and this matrix had A-8346 written on it. This same A/B numbering happens also on other records, it may be that routinely two matrices were made and the 'A' shipped off to England and the 'B' kept in Camden.

The numbers as well as artist and title can be seen (with difficulty) handwritten on the label area in relief on the matrix. Also part of the date can still be read (..6-09) and 'RC #1' ('recording #1'?). With this information, probably this record will have been made around 1910. The blank side has the writing angel and 'GRAMOPHONE' marking, but no 'Made in Hannover' so likely pressed in the Hayes, England factory.

The record is now stored in a sleeve from the music shop of Willem Sprenger in The Hague ('s Gravenhage).  It advertises that the shop is agent for The Gramophone Company and for The Zonophone Company. After about 1903, Victor and The Gramophone Company (makers of gram-o-phones) had acquired control over the various Zonophone companies (makers of zon-o-phones). This was after some lawsuits and shenanigans not unlike today's smartphone patent-suits. Both being mentioned as separate companies instead of 'labels' suggests a date not later than about 1918.

Dating the sleeve is made easier by the the list of prizes won in 1907, '08 and '09 for the Gramophone company products and the list of notable customers. The companies are suppliers to a.o. the Empress of Germany and HH Pope Pius X (1835 - 1914). Overall a mixture of English, French and Dutch, it advertises the shop's large selection and 'first class' repair service. (Odd Dutch (?) spelling of telephone.) 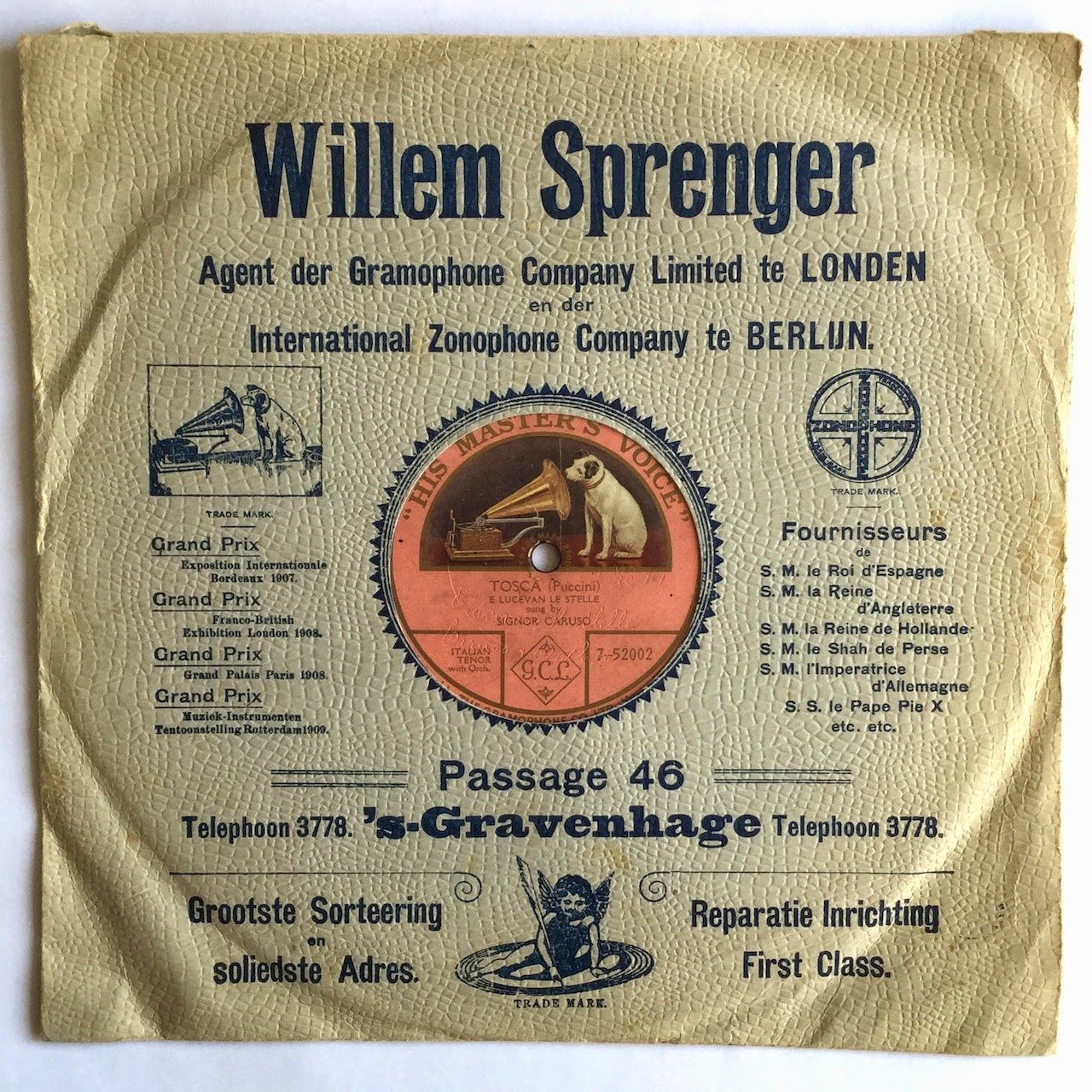 All this puts the sleeve at around the same period as the record.

The address in The Hague of the shop where a customer walked out of the store just over a century ago with a new record in this sleeve is in 'De Passage' shopping mall in the centre of the city. This mall was opened in 1885 and purpose built for the 'up-market' shopping experience. The record shop of Willem Sprenger was at number 46 until its closing in 1973. (Number 46 now houses a 'Grand Café'.)

In the online connected world, it is now instantly possible for everyone to hear what that buyer would have heard when playing the record on his/her amazing talking machine at home:


This is exactly what this record does sound like. When played on a wind-up gramophone, the louder passages are still very loud and full. Quite amazingly so, knowing that this is an acoustic recording - no electrical microphone or amplification was used.

A century old disk, from the final years of the belle époque.

Another mention of the Tuch-Rite blind-typing training tool. This time it gets a brief paragraph and a photograph in the February ('38) issue of Popular Science. The device that aims to teach touch-typing without a typewriter (oxymoron?) is illustrated in use with an actual typewriter sitting right in front of the user. 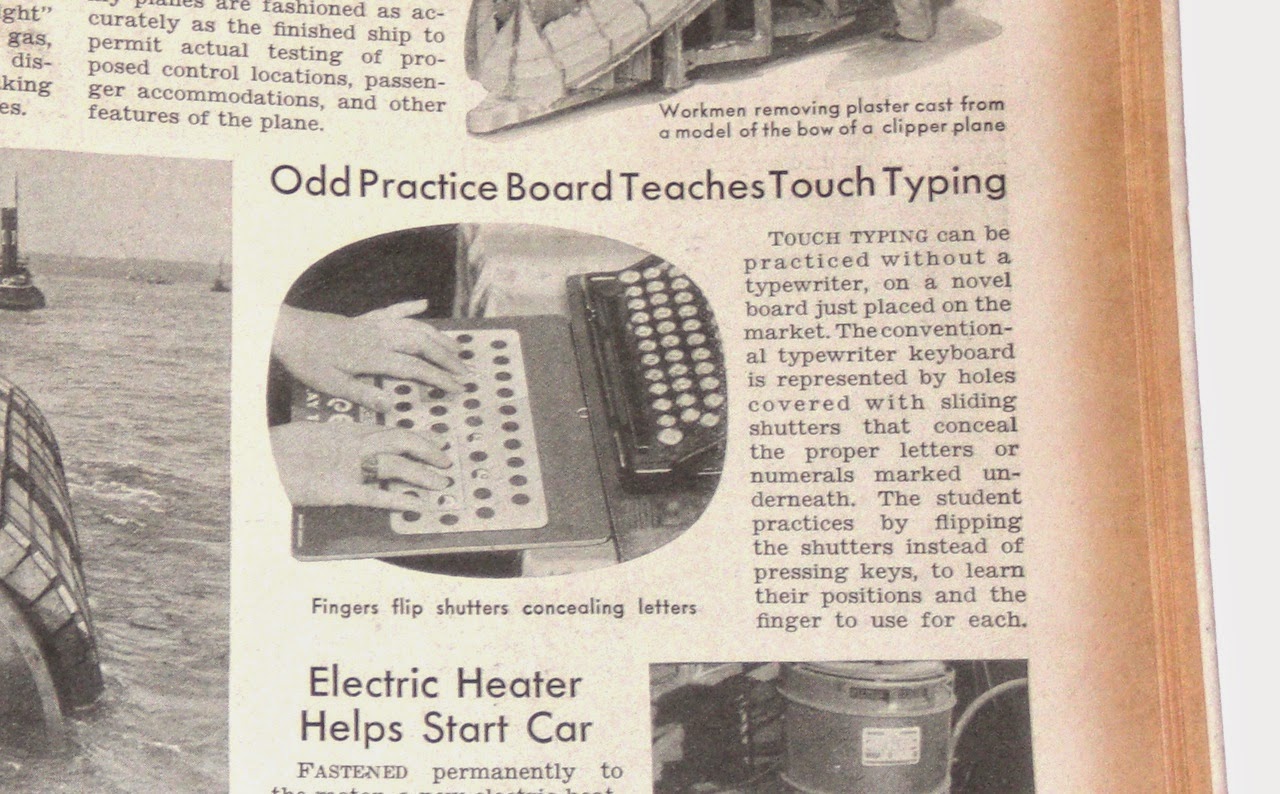 From the article the Tuch-Rite was not only publicized around that time, but actually was launched and for sale. On the market within 2 years after filing and before the patent was published.

A new invention then, exactly as promised on the magazine cover. 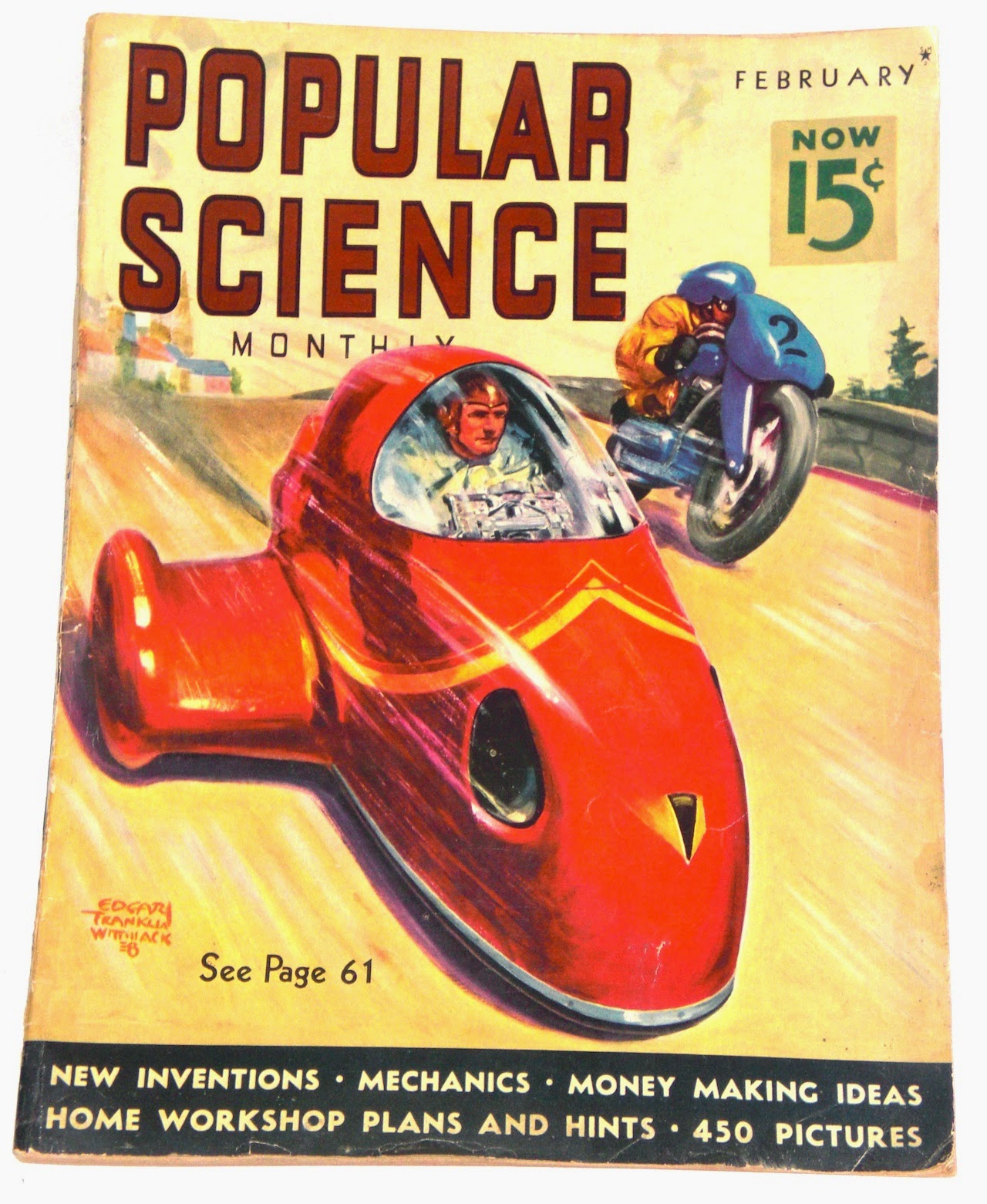 (Could be a theme with these front covers; again a streamlined bike. This time it is motorcycles with a very sleek 'sidecar' machine.)
Posted by RobertG at 11:42 AM 2 comments: