The fur between the keys is removed and the overall machine polished-up nicely. 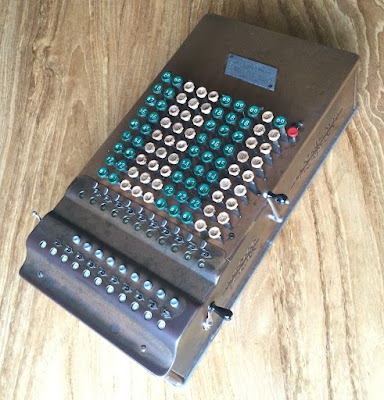 The keytops themselves were first cleaned of the runny 'goo' by simply wiping it off with tissue-paper. Much of the remaining dirt and expanded 'ink' was removed with a rag plus soap and water. The top surface and the sides of the octagonal keys was finally 'polished' with metal-polish - this makes the surface a little brighter again without damaging too much. Especially the white, dimpled (odd-numbered) keys have deteriorated - the old plastic has shrunk, cracked and curled up. The keytops are still not completely cleaned, but the keyboard is now serviceable and no longer 'icky' to touch.

To clean between the keys without removing them (a non-trivial procedure), a 1/4" square wooden slat wrapped in a damp rag was used to get between the stems. This slat with cotton rag with some metal-polish was next used to clean the stems themselves. Great care was taken to not rub the top-plate with the metal-polish, as this would have damaged the finish!

The case of the Comptometer is made of copper-plated steel that was then given a clear lacquer top-coat. On the front-right corner these layers are worn-through from regular use. (Quite some information about these Comptometers is on the internet at various sites, for example a lot of information on the different types and on the mechanism is on John Wolff's Web Museum site.)

The copper-coloured case was washed overall with a damp cloth with soapy water. With a wooden toothpick the dirt around the edges of the raised decorations was cleaned off. 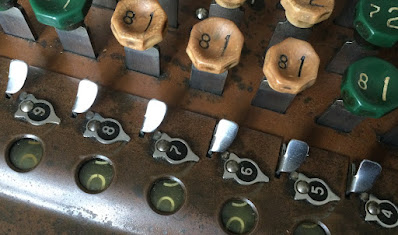 This means that many of the stains and spots cannot be cleaned without completely destroying the finish. These machines were never brightly copper-coloured, but always a darker brown. (Perhaps the finish was chosen to mimic the original wooden box models in general appearance, when they switched to metal cases in 1904. Pure speculation, but could well be.) 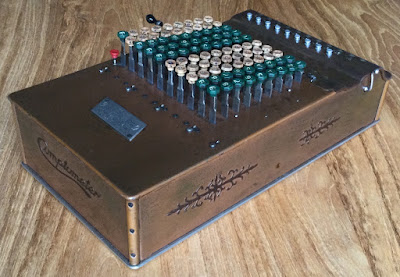 Nevertheless, the machine cleans up well. To protect the finish against future corrosion damage from cracks in the lacquer, the case was given a polish with petroleum jelly (Vaseline). This will fill cracks and help seal the metal from oxygen - plus it gives a bit of a shine to the surface.
The serial numbers of the machine are repeated on the mechanism internally. These are the same as those stamped on the outer case, further confirming the calculator is 'unmolested' and original.

On Comptometer model J calculators the back plate generally carries a list of patents. On the Supertotalizer the backplate only has the Comptometer script-logo and the patent list is now on the bottom-plate of the machine. 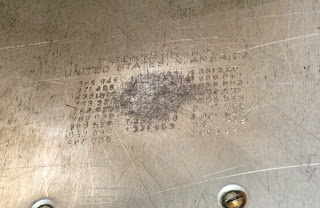 On this machine the list is scratched and a bit difficult to read. Even though this machine was manufactured around 1935, the list still starts with Dorr E. Felt's first US patent 366,945 for the Comptometer issued in 1887.
The display windows have strips of celluloid behind them. The celluloid is of course yellowed with age, but not too bad. Several yellowed-dot patterns on the sheets were evidence that these strips had been shifted around several times to place a new, bright bit of celluloid in front of the windows. The strips were merely cleaned and placed back. 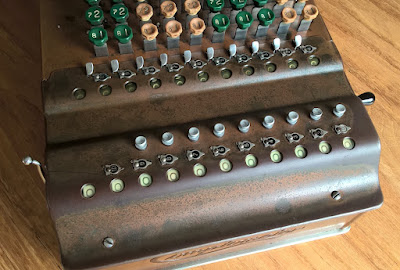 Next to tackle the mechanism. The columns 2 to 5 work, the rest refuse to budge or will not do a carry at all. It's as if the machine is lubricated with treacle. The Totalizer bits are worse, as if lubricated by tar.
Nevertheless, the mechanism is complete with no obvious damage so it should respond well to new oil and exercise! Lots of exercise :-)
Posted by RobertG at 6:16 AM No comments:

Last month on the way back from an errand in town, popped by a local thrift store to just have a browse-round. Right inside the entrance on the table that normally carries the typewriters sat this calculator. 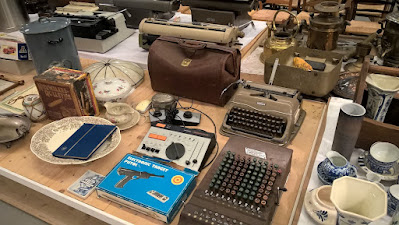 (Not a good picture, but taken quickly - the full-keyboard calculator at bottom-right.)

That's a Comptometer Supertotalizer, that is!

A Comptometer is a fairly common type of quick key-driven adding-machine. The Supertotalizer version however is reported to be pretty rare, so it was surprising to just walk into one here locally in the recycling/thrift store. Did a quick check and picked it up then-and-there, making a U-turn back to the check-out and quickly bought it. That browse-round of the store will have to wait for another day.

Had been keeping half an eye open for a Comptometer already for some time, waiting for a nice 8-column black-keys specimen to turn up locally and reasonably priced. When however a rare Supertotalizer sits right there for the picking-up, a 10-column machine with green keys is good too :) 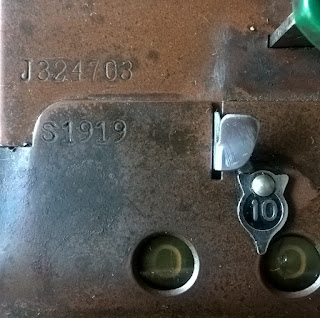 It's very 'stiff', several carry's don't work and the totalizer is completely jammed, but it is complete with all the comma-indicators and keytops.

About those keys; they are present..., however, as is common for these 1930s model J machines, the plastic (Galalith?) of the white keys has severely degraded and the ink has 'gone wild' and migrated all over the keytops. The awful sticky dust (fur!) under the keys and tarnishing suggest the machine was left untouched somewhere in a barn for the last 50 years or so.

Compared to typewriters these are dauntingly tricky (and dense) mechanisms to take apart and tinker with, so hopefully a good cleaning and new lubrication will restore the mechanism to working order. First however is to 'sanitise' and clean the outside and the keyboard... (yuck!) 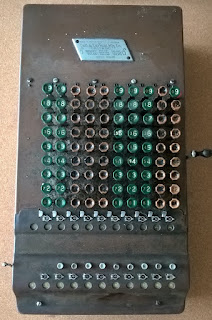 Not so sure it was a worthwhile purchase now that the true state of the machines is visible, but definitely 'projects'.

Yesterday acquired a batch of three typewriters that should last me for a while to tinker with to get them fixed-up and usable. They are all pre-war portables and actually neat machines of themselves. They'll be kept in storage for a while, to be taken-up as projects over the coming winter (or following summer...). But already some pictures of the three as purchased: 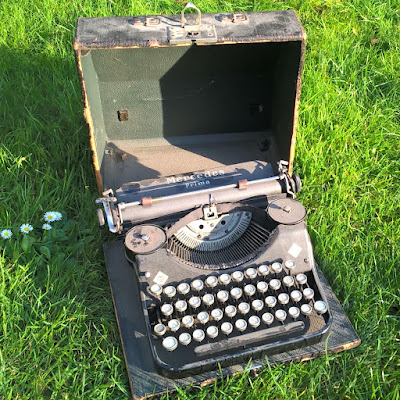 This is the most dusty machine of the lot - for a machine to attract this level of dust-fur inside a case is a remarkable feat. The case is cracked and the spools are rusty, but underneath all the dust this machine seems to be in excellent condition. The inside mechanism is completely rust-free - it also shows its Underwood origins. It is internally identical to an Underwood Universal - will be curious to see if it was converted to metric for manufacturing the design in Germany.
The serial number plate fixed per Underwood-practice to the frame behind the left spool. This makes it I think a 1934 machine. 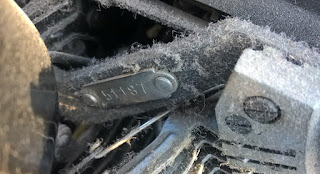 The second typewriter in this lot was one that got my attention - an Erika M portable. 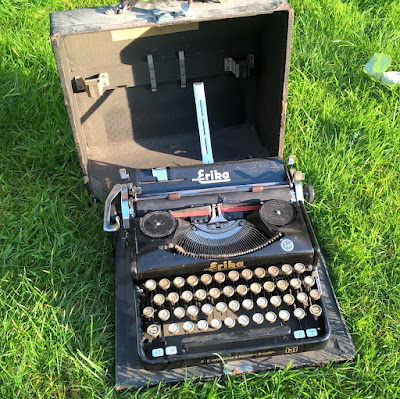 The Erika and especially its case are also very dirty, definitely 'barnfind'-condition. It seems mostly complete, but has several issues such as seriously bent typebars and non-functioning ribbon-vibrator. It is not 'mint' so will not be worried about digging into this machine to see if it can be fixed-up. These are truly magnificent machines when tuned well, so there's something aim for :)
The keyboard layout of this machine is probably a custom one-off job. It combines the very Dutch 'IJ' key with Norwegian 'AE'. More reason to want to have this machine usable again. The bent typebars are worrying though. 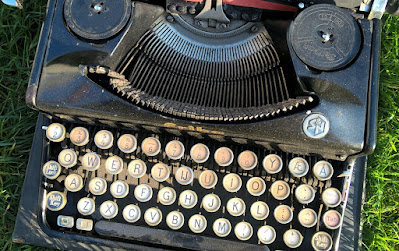 The third typewriter in the lot is a somewhat tired-looking 1923 Underwood 3-bank without case. 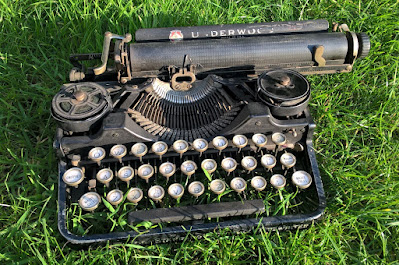 Had been looking for a nice specimen of a 3-bank for a while, but they are getting increasingly rare and nice ones are increasingly costly. So as an alternative I was tempted to get this beaten-up project-machine that will be good for fixing-up and exploring the mechanism of these miniature typing wonders. Apart from the usual rubber-issues, the mechanism seems all-there and working - albeit very stiff and 'crunchy'. The paintwork is dull and decals are worn with a light sprinkling of rust all over the brightwork. This will be a guilt-free restoration project!
First however all three will be stored. All machines were given a quick wipe-down to remove the worst of the cruft, then sealed with their case in plastic bags to be put away (in a dry and warm spot). The plan is to take these out one-by-one as restoration and repair projects over the coming year(s).
If the state of these typewriters had been clearer, I'm not sure I'd have purchased the batch. But now that they're here - many months of typewriter-tinkering fun is ensured :-)
Posted by RobertG at 1:46 AM 2 comments:

The Thales model CE mechanical calculator was missing 4 of its 5 comma-indicators. 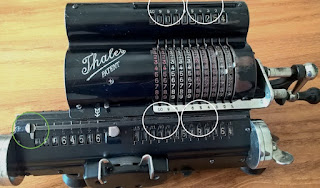 The originals are fairly fragile and are often missing from these pre-war Thales calculators. The bottom of the thin sheet-metal stamped construction is clamped and comes away easily - the whole thing then just drops off its rails. Although the machine 'works' also without them, to be complete a new set of these "Kommaschieber" could be made using 3D printing.

Luckily there was one remaining slider still with the machine - using this one original as a guide, a 3D design of a replacement was made that would be printable in plastic, function on the machine and still resemble the original. A set of these were then printed in PA using MJF-technology printers. This technology creates parts that are quite strong, slightly flexible and with dimensional accuracies and features good enough for this part to work. The surface as-printed is slightly grainy, but can be smoothed with sanding.

For printing (and handling) a set of the pointers were grouped (with connecting 'beads') into a single printable part-file and ordered in MJF (Multi Jet Fusion) at Shapeways. When received the parts were first washed to remove any grease or other remaining contaminants. Then the group was given a coat of primer (spray-can) before a first coat of 'chrome' lacquer. The parts are then still very grainy (and shiny), ready for separating and sanding smooth.

Using water-based modelling paints in metallic-silver, the parts can be given a proper brushed-metal appearance. Because the paint is water-based, water-based inks could be used to find a good colour match for the nickelled parts of the original. In this case, brown and yellow Ecoline was added to the silver-paint to find a colour that would not jar too much with the original. (Metallic 'silver' is a surprisingly varied colour.)

It took a few iterations of filing and sanding the surfaces smooth and re-applying a newly-mixed brushed-nickel paint to get the comma-indicators looking the part. The printed parts actually fit the comma-bar without any modifications and the PA material gives it a good, firm grip on the rails for sliding them. 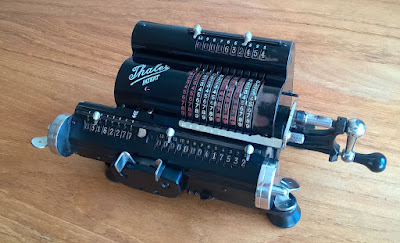 Now with the complete set of 5 indicators, the Thales mechanical calculator again looks as it should and comma-positions can be again indicated with the pointers. (The comma in the lower-left UW register shows the answer to square-root of 10 being 3.162277. The indicator in the lower-right RW is between positions 11 and 12, where it started with 10 in positions 13 and 12. The RW and the upper EW registers now show the remainders of the square-root calculation. These actually make it possible to determine if the last digit of the answer should be rounded up or down - if the RW is less than half the EW, then the next digit would be less than 5 so round down, otherwise up. The EW is 632... so checking against 316.. immediately shows the RW is larger with 417..., so the answer has to be rounded up to 3.162278. Have been reading-up on the use of these calculators; fascinatingly ingenious machines!)

The 3D model of a group of 10 of these indicators is available for download at this link.