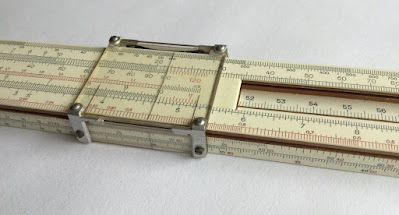 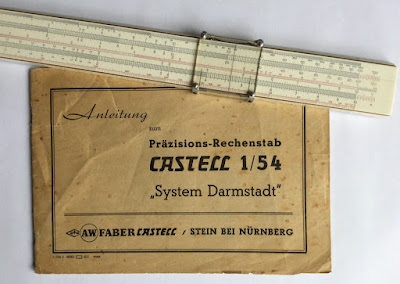 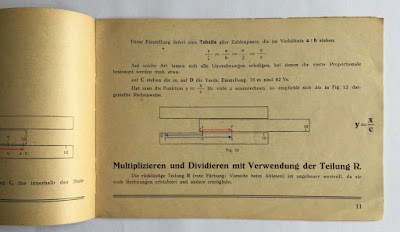 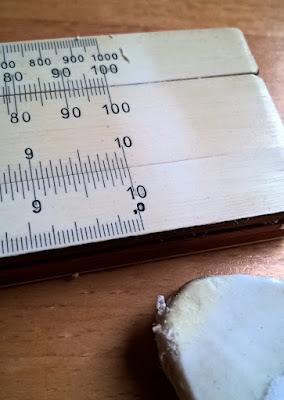 Further advice is to apply a little vaseline to the sliding surfaces of the tongue. This does indeed help to revive a long dried-out rule. In this case it also needed a little (little!) talcum to reduce the stick-slip effect that remained, but vaseline is I think generally good advice for a wooden slide rule.
Again a functional instrument! Obsolete of course, but fascinatingly ingenious and it will be entertaining to discover from the instructions how to work it.
Posted by RobertG at 7:20 AM 5 comments:

A fine and very solid instrument, made by A.W. Faber.

This sliderule was seized-up, but otherwise undamaged. No chips or worn spots and nearly completely straight still, but the tongue was held very tight - nearly unmovable. Even the cardboard box is still in good shape. The instrument needed only a little light cleaning to be very presentable. The tongue being 'stuck' made it 'unusable' however. It is obsolete of course and not for actual use, but I do like the 'analog collectable objects' to be as functional and working as possible.

Loosening the five (5!) adjustment screws that control the 'grip' of the stock would yield a gap between tongue and stock (i.e. much too loose) and still the tongue was barely movable (i.e. much too tight). Somehow the sliding surfaces of the parts had become roughened to 'grip' with even the lightest clamping force. Having tried a few remedies, what finally brought the friction back to usable levels was applying a very little vaseline. (This was actually the method advised by Danish manufacturer Diwa for their sliderules.)

Like most continental sliderules, it has the Rietz arrangement of scales - the scales are not marked, but follow the conventional arrangement. Being an older sliderule, it hasn't got the inverse C scale.

Instead of the more usual mahogany, this sliderule is made of Swiss pearwood. This makes it relatively light in colour and surprisingly heavy. In comparison, a Keuffel & Esser Polyphase sliderule weighs about 57 grammes, this Faber sliderule weighs 113 grammes. Though the Polyphase is admittely slightly smaller, both have a 25cm scale and offer the same functions and accuracy. 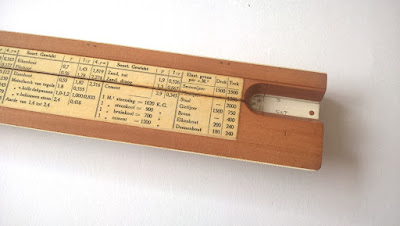 The datecode on this sliderule is a simple '1' on the right and a '9' on the left - these should be for month and year (in the 1920-ies). From the information in the Sliderulemuseum, this would mean this Faber 375 sliderule was manufactured in September 1921 or January 1929. The German patent 365673 listed in the well was issued in April 1922. The sliderule does have the patent's construction - so it will be January '29.

Whichever exact year, it was made during the Interbellum for export to The Netherlands. The table with conversions and constants is in Dutch. The seller was able to share that it was owned (and probably purchased new) by a teacher in a technical college. Probably well cared for and little used.

The A.W. Faber or Faber-Castell company is still in business. What's more - until very recently at least you could still purchase a new (NOS) sliderule from them online. Since last year however, this article seems to have been taken offline...

No need to buy a new one though. This instrument is still in good shape - obsolete of course, but very usable :)
Posted by RobertG at 11:33 AM 3 comments:

New brushes for the E6 motor

Putting the E6 motor together again with the fixed parts, it unfortunately still did not work. It seized up and the current draw was too high as well - tripping the circuit breaker used to protect the battery. (That circuit breaker is an original ~1937 Meccano item made exactly for this purpose - 'Retro Tech Holland' here :-) 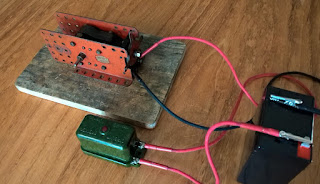 Measuring the windings of the armature and the stator suggested these were all as they should be - in the 1 Ohm range. Comparing with another E6 motor of similar vintage, showed that the main difference was the resistance of the brushes. This motor has copper-filled brushes with very low resistance, unsure if those are original or later replacements.

Additionally the brushes are very worn, short enough to tilt and wedge themselves between holder and commutator. Even though the armature rotated freely, when powered the brushes seemed to wedge and lock-up the armature - totally blocking the motor.

Buying new brushes for such a motor is a bit of a challenge, not a common size today. Unexpectedly, there is a ready supply of graphite rods sold as electrode! Sourcing a couple of graphite electrodes of nominally 5 mm diameter was easy enough and surprisingly affordable. The rods are "almost round" and closer to 5.2 mm, but readily ground down to about 4.8 mm (3/16" probably). Then sawing off two lengths of almost 10 mm (3/8" seemed right) and adding a slot gave reproduction electrodes. ('Repro Tech Holland'...) 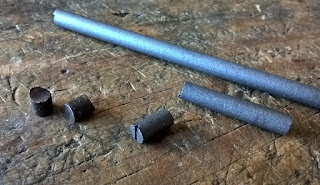 With the new graphite brushes, the motor again runs - starting up fine without tripping the circuit breaker. With hardly any arcing/sparking too. 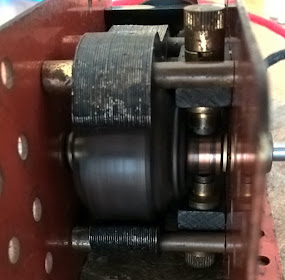 To give the motor a test-run - bring it into use again - it was built into a simple crane model out a 1928 instructions booklet. 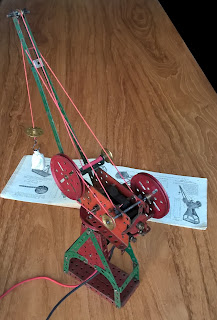 It still needs some adjusting, as one direction runs smoother than the other. This is not unexpected, probably needs further tweaking of the positions of the brush holders relative to the motor-axle and of course some running-in of the brushes. 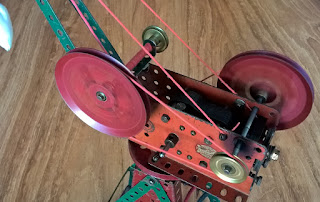 How well the graphite electrode brushes will stand up to wear remains to be seen of course, but for now they will do.

So, the happy outcome is that this wrecked 87 year old E6 motor is again 'up and running' :)