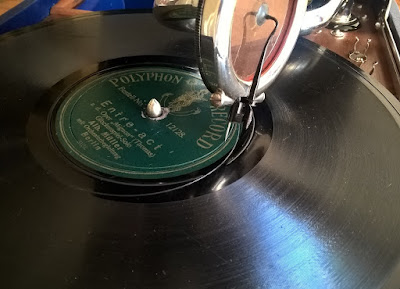 On the other hand, this seems the runout track by design. There is even a deliberate opening in the inner ridge to let the run-out groove run onto the label. Some records have a scratch or damage in a groove that makes the needle jump the track - to then play havoc on the label. This looked like one of those when I saw it spiral onto its label, and heard that grating sound. But this one's strange in that it seems 'by design'.

Maybe the matrix was initially made for a smaller label (though the inner ridge suggests otherwise). It feels like an older, 'teens recording, the pressing likely dates from the early 1920-ies.

Or maybe the recording engineer simply made a mistake with setting up the cutting-machine for this session. 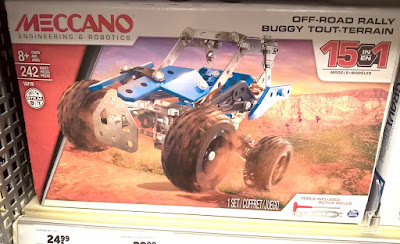 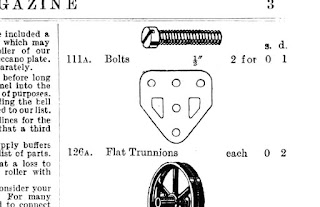 Nevertheless, they still do have parts on the shelf - have done for a century. Good show, that.
Posted by RobertG at 2:41 AM 2 comments:

Continuing to accessorise the pre-war typewriter - a stapler. Just purchased a booklet-stapler. 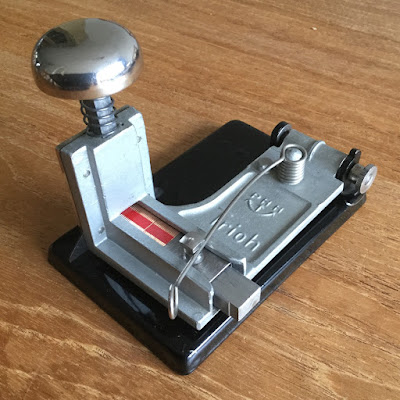 This Trioh branded stapler is almost like-new. Very rigid design, all metal (save the cork base under the metal baseplate). Will staple booklets with its angled arm. Very simple spring to feed the staples. 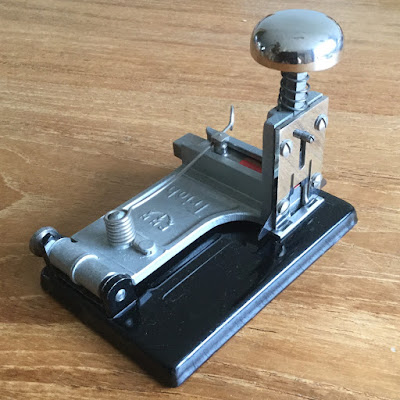 From a brief scan of the net; these should be fairly common. This model was made by the Hamburg firm of Wolf & Sager probably from the early 30-ies. There are an astounding amount of small variations, judging by a quick image-search on the net. Different staple-feed spring designs, a multitude of baseplate variants - but all follow the same basic arrangement. Built to last.

This specimen seems the most simplified of the design, and does not have a DRM/DRGM marking, making it probably a late (post-war) manufactured model.

The stapler came with an additional cardboard box. 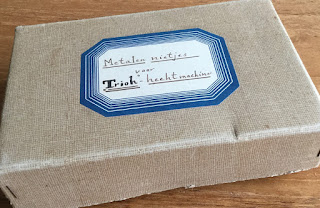 And indeed - should keep us in staples for decades to come. 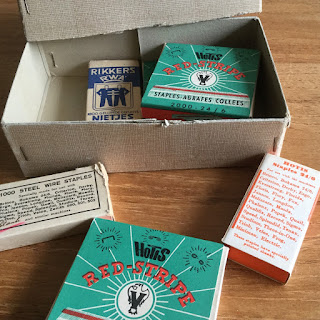 With thousands more red-stripe staples - these have weak spot at the painted section, allowing you to cleanly 'un-staple' the paper by breaking it in half. Red-stripe staples are still being manufactured and available. These boxes are 'patents pending' (though not telling what application numbers actually are pending), suggesting they might be the same age as the stapler.

The black lacquer and chrome makes this a good match for the pre-war portables :)
Posted by RobertG at 3:15 AM 2 comments:

Took time for a quick de-tour on the commute to browse a large thrift store. On one shelf, spotted a black case that looked like it could contain a typewriter. 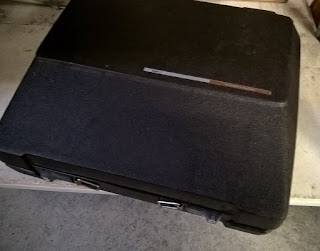 The case is made of hard plastic. Looking closer anyways to read the label - yes that's a typewriter.

Lifting up the lid to peek inside; yes it is indeed a typewriter. It is electric, plastic and all beige. A Smith-Corona C400 electric typewriter. 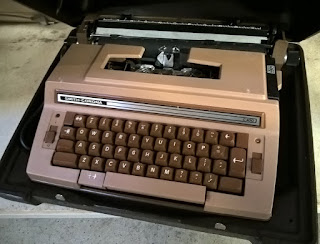 It's still plastic machines season here...
Posted by RobertG at 8:45 AM No comments: 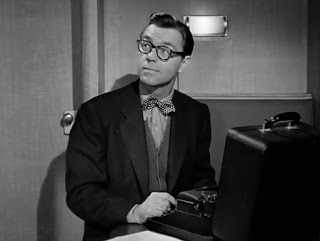 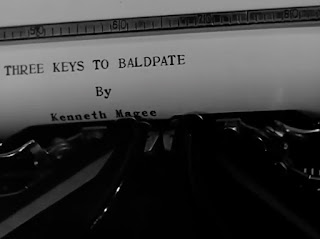 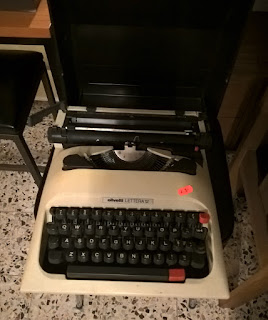 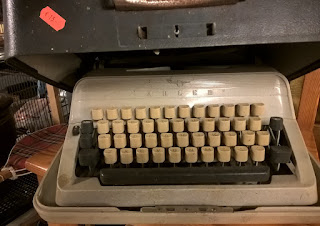 The supply of pre-war all-metal machines seems to have dried up for now - we've arrived in a plastic era here :-)
Posted by RobertG at 2:19 AM 2 comments: