A very low cost sliderule, to be picked up for the modest amount of 25 cents at Woolworths or so. Currently available online at less modest yet still not excessive cost. Judging from online sightings, these sold well in the US as well as in Britain. (Could actually be Woolworths then :)

Made by Lawrence Engineering Services in Indiana. The company was making these in Wabash from about 1935 to 1938 when it moved to nearby Peru. Simple printed scales on wood with A [B CI C] D and no scales on the back of the slide. Type 8B is the 'B' version of their 8 inch sliderule. The 'A' is identical except that didn't have the reciprocal CI scale. The cursor or runner is celluloid in a stamped metal frame. 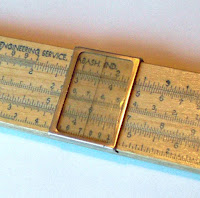 On the back there are very compact instructions on how to use the sliderule - very condensed small print. An amazing amount of correct information in a small space there!

After some cleaning and a very little talcum, it works fine and is still absolutely straight. For such a low cost item, it survived very well :)
Posted by RobertG at 11:20 AM 5 comments:

An old photograph found in an old book a few years ago. 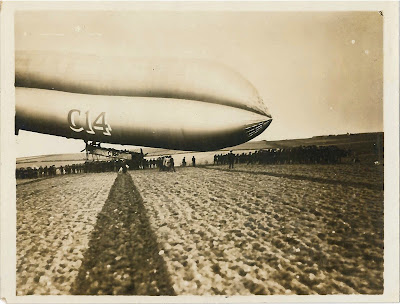 By now I've learned this is a picture of the 'Coastal Class' airship C14. As with nearly any field of interest, there is an active and helpful society. In this case the Airship Heritage Trust that also have a page detailing this particular class of airship and the hazardous missions undertaken by the men in this fairly 'rickety' craft.

Quite a crowd in the picture, ground crew marshaling the airship it looks like. No sign of this being an aerodrome, just empty countryside. The wide 'stripe' on the ground (plowed field?) and the large crowd however suggest that this is a scheduled landing spot. Most of the men are in uniform; navy personnel then and not local bystanders.

The C14 was delivered in September 1916 and taken off the roster on July 17, 1918 (as 'unserviceable'). The airship looks pristine in this picture; could this have been taken at it's delivery to the navy?

Seeing this scene in an actual photograph print makes it very 'real' - the 'Great War' can sound so far removed from today, but it really did happen and not even all that long ago.

At the reverse of the photograph is this dire warning: 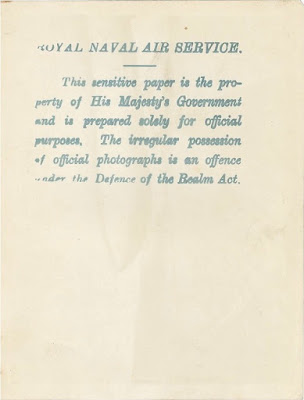 How did this government paper ever end up as a bookmark in a book? What's more, in a book sold at a thrift store in a foreign nation. A non-belligerent nation back then, but still...  One of those little mysteries.
(The book by the way is 'Common Faults In Writing English by Henry Alexander, published 1916.)

Strongly worded notice, but after 99 years the defence of the realm will probably be fine with this picture being in foreign (!) hands.

Came across this small article/announcement when leafing through a magazine. (An old one.) 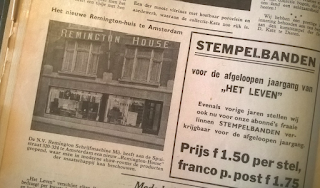 Featured in this '36 issue of the illustrated weekly 'Het Leven' ('Life'); the 'Remington Typewriter Co' just opened their new 'Remington-House' with a modern showroom where the products of the company can be viewed. 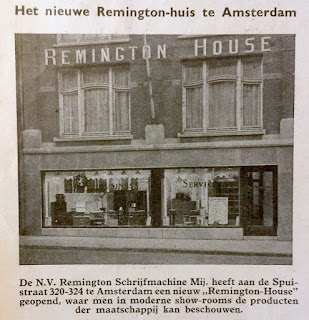 Today the building still looks much the same, including flagpole. No longer selling typewriters there, but food and drink.
Posted by RobertG at 7:15 AM No comments:

The parts machine Remington Portable #2 typewriter was not working, the typebars wouldn't even lift up and seemed jammed in place. Prodding some more when trying to take off the bodypanels, it turned out that it was just sticky typebars that were jamming the lifting mechanism. The segment has a dark brown tarry substance all over that very firmly holds typebars in position.

That doesn't explain why the protecting hooks are bent all out of shape, but did make it possible to take it apart and get at the internals: 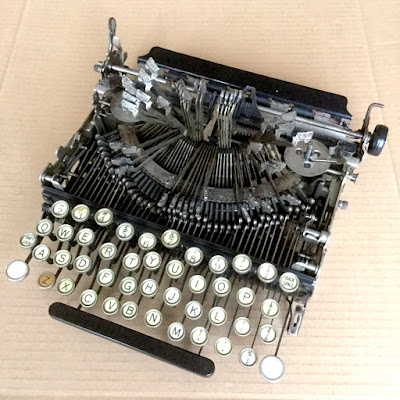 The machine probably was badly oiled some time ago - this 'bad' oil by now has turned into a brown, sticky substance. Looks like creosote in the machinery. 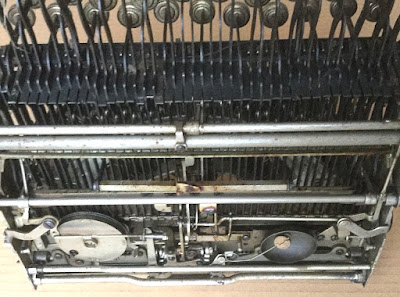 Some keylevers have slipped off their linkages, but overall there looks to be nothing really fundamentally un-fixable, nothing that I don't now have parts for.

In addition to the oiling, it has had some repairs done on the keyboard, with a new 'z' keytop and the shifts getting 'foreign' parts. These look out of place rather (to me). So the one little thing to properly fix this one up again would be some correct pattern keyrings for the shifts and a new 'z' key. Or keep the thing as 'parts' of course.

First up a slow, long, thorough de-gunking!
Posted by RobertG at 12:03 PM 4 comments: