Apart from being very dirty, over-oiled and simply broken, the Synela portable typewriter also missed a few parts. These were re-created, or at least replacements good enough to make the function work again.
The bell for example did not ring at the end of a line - and that 'ding!' is an essential part of any typewriter :-)
The cause of the bell not working, was that the little lever that triggers the bell-clapper stayed 'down'. Similar to the Royal portable machines this mechanism is copied from, the clapper is triggered by a small upright lever that is primed by the right margin stop. This little lever is spring-loaded to return upright for a next end-of-line 'ting' - missing the spring, the bell does not work.

With some experimenting, a spring-shape was bent from a used guitar-string that fits the part and functions to re-set the bell-clapper lever. Guitar-string wire is soft enough that it can be bent, but hard enough to be springy and keep its shape. 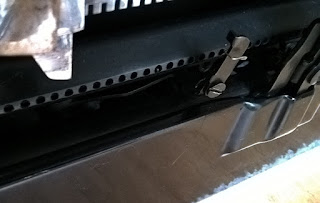 The end should probably be shaped a tighter fit around the lever, but it'll do. Maybe it will get some black paint to make it less obvious - or another, improved version will be formed :)
Another issue was the ribbon-reverse. The ribbon transport had already been fixed with an extra improvised spring on the left ratchet, what still remained was the ribbon-reverse push-knobs. The right knob was missing - needing the remaining left knob to be pulled-out to reverse. So sort-of functional, but not as it should be.
These S.I.M. knobs are nicely made hexagonal affairs, with an 8mm head. It turns out that this is exactly the size of a DIN933 M5 screw. To make a new knob, a brass M5 screw of DIN933 pattern was filed down to a similar shape and then threaded over the tip. The original was M2 or thereabouts, for the new, brass knob didn't dare go smaller than M3. As the thread is not visible when mounted, not a big deviation. 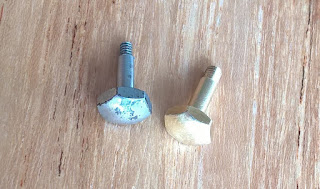 The somewhat rough surface of the brass crew was then nickel-plated. This luckily happened to provide a 'matte' finish very similar to the remaining original knob. 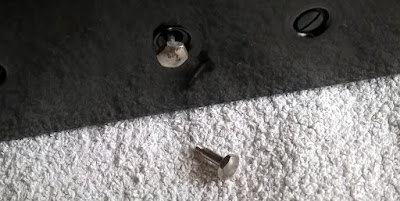 Firmly screwed into the now M3 re-tapped bracket inside the machine, it looks credible. And it's functional; pushing the left / right knobs shifts the internal ribbon-transport bracket to change ribbon-direction.

After fitting the repro-knob, it also illustrated why the original right knob could have been lost. Despite being made to the same dimensions as the left knob, it sticks out of the machine much more. It looks easily snagged or be broken off - or just was considered a nuisance and discarded.
To complete the missing parts (at least those known about so far), new feet.
The S.I.M. machine has rubber feet that are held with an inner-flange between two rims on a tube. To replicate that with 3D printing and make it fit reliably would be a bit tricky. So a different design with the machine resting with its the tube-end on the feet-base and a beveled inner flange for retaining only. 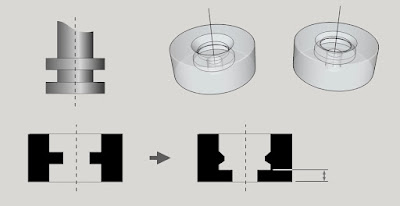 The machine must have been knocked-about a bit, because the feet-tubes were not all at the same height. To be able to compensate with the new feet, two different 'sitting-heights' feet version were modelled.

Duly printed in PU-rubber and pressed onto the machine.

The typewriter can again sit on the table by itself. And 3D printed rubber-feet are also grippy enough that the machine stays put when typing - the Synela now no longer tries to sneak off to the left with every carriage advance :-)
Posted by RobertG at 5:00 AM No comments:

Modifying the character-set on a typewriter was generally done by swapping out one type-slug with another - this one however got composite, modified type-slugs. 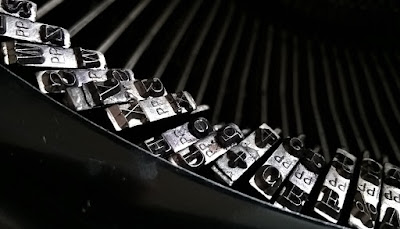 The uppercase symbols on the 3 and 4 were ground away and thin slivers of a different character soldered on top of it. It looks fragile, but after nearly a century they're still typing :)

Posted by RobertG at 3:23 AM No comments:

A couple of days after picking-up a Hammond Multiplex typewriter, finally got round to visiting the local little typewriter museum. Had been planning to go for years, but now finally got the push to do so :)

It is a small-scale 'collecting museum', with both a collection of Agfa cameras and a collection of typewriters. In display-cases an amazing array of Hammond machines! And many other machines too - a great cross-section of machines on display around one side of the building.

On the subject of Hammond machines; also shown were the small wooden boxes with type-shuttles - once available from Hammond for 4 dollar apiece. (Today less readily available - perhaps something to try with 3D printing...) 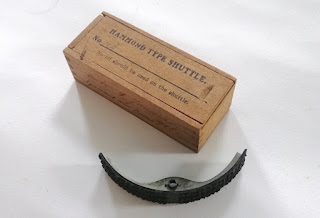 On the subject of Hammond type-shuttles; also in the collection this wooden storage-box with an extensive set of shuttles. Type for all the languages available for the Hammond - pretty special to see :) 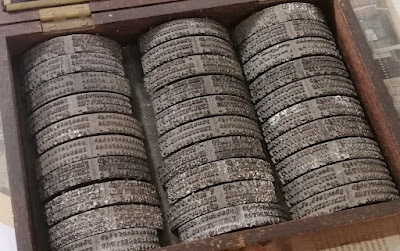 The camera collection was likewise interesting to discover. Recognised some cameras (that's our Billy Record!) and learned more about the development and variation of these very 20th century items. Both the typewriter and the camera collectors (or curators) were present, so great information on all the exhibits. 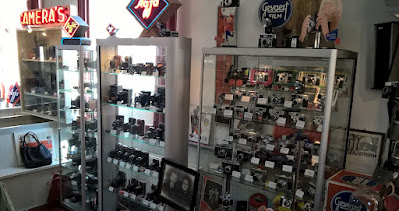 Overall a great little museum - well worth a visit. Some rare machines seen now 'in real life' and able to see how big (or small) e.g. an old Remington up-strike machine really is. With expert information from the knowledgeable collectors themselves - and a cup of coffee too.

An enjoyable afternoon-trip, completed with a walk around the grounds of the former Jongemastate castle nearby. (The moat and the 1603-built gatehouse are still there, but nothing else of the old buildings remains...) 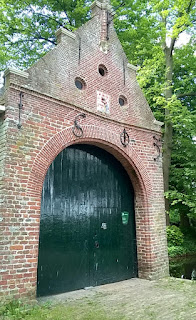 (Those Hammonds looked magnificent - something to aim for in the restoration of the newly acquired Hammond :-)

Something different - a Multiplex!

It was not too far away, so a quick trip to pick it up and no shipping-risk for something like this. This was the main object of the trip that also yielded that telephone - another typewriter! This one is certainly not within my usual 'scope' of interbellum portables, but a venture into a very different type of writing machine. Possibly paid a bit much (at least more than I've ever done for a pre-war portable), but we have a grand -albeit a little tired-looking- Hammond Multiplex typewriter complete with case.

It is the open, universal-keyboard model, probably made around 1915 or 1916. It just looks very impressive and somehow very Edwardian. And it's a completely new writing-mechanism to discover! 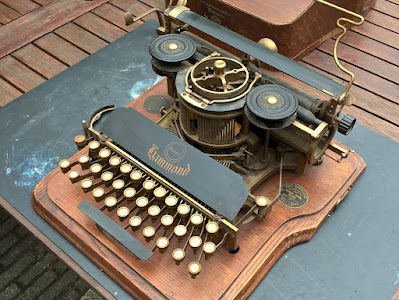 The case suffered from moisture, much of the glue has let go, seams are loose and veneer is delaminating. 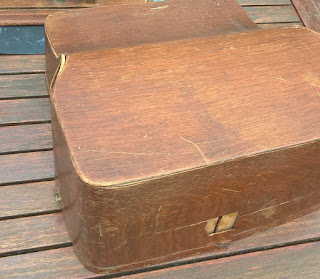 The instructions inside the lid are still there. Oddly, for a machine sold in Holland with a Dutch keyboard the instructions are in English, French, German and Spanish. Rather a nice touch; the German text is in fraktur too. 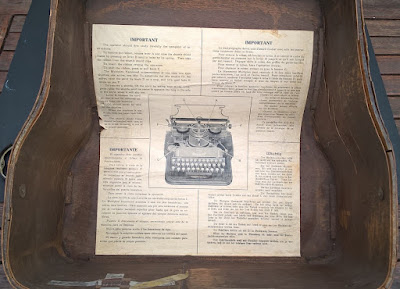 Unexpected bonus; the missing bit of veneer from the back of the lid is still there. It is taped to the inside of the lid! The machine looks like it is straight from a shed or damp attic, but care was taken to save some bits that fell off. 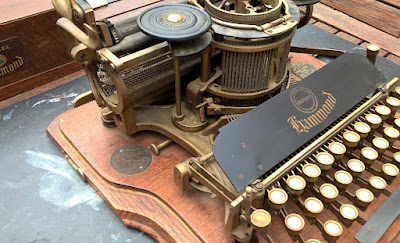 One type-shuttle mounted (sort of) on the turret - a regular Medium Roman shuttle with a character set for the Dutch market (with 'f' currency symbol).
There are unfortunately more parts missing; e.g. the caps-lock lever is absent. Naturally, there is no impression-strip - that is anyways a wear-item that will have to be sourced or made. There is also no drawband - and the spring-motor seems to not tension when wound (hmm...). Both the hard-rubber spools are damaged, but for both spools there is luckily one side that is intact so it is not too much of a problem to 'fix' and make presentable. 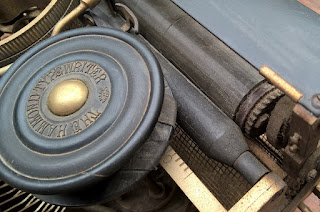 As seems very common for Hammond typewriters, the feed rollers are cracked badly.
Taking the machine off the base-plate, it really shows that it is a golden bronze colour all-over. That should be bright nickel, the machine is just very (very) dirty. 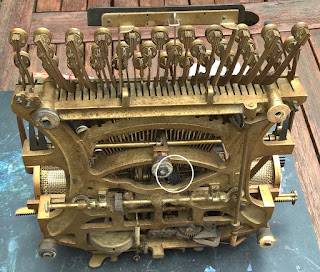 Another thing spotted when looking underneath - is that an extra type shuttle!? With some wiggling and tweezers, a second type-shuttle could be manoeuvred back out of the mechanism. So there were two shuttles, it is a Multiplex after all! :-)  The machine now has Medium Roman (34?) and a Medium Roman Italic - very likely the original two shuttles that came with the machine back in 1915 or thereabouts.

With the baseplate 'by itself' it becomes clear that it is held together mostly by the remaining felt. All the planks are loose. This should be a relatively minor thing to repair - glueing it all firmly together again. 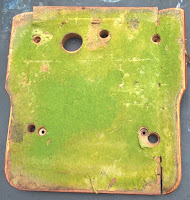 Before tackling a restoration, to see if it can be made to work again, a light machine oil will be applied to all visible screws. As this creeps in, it will hopefully make them easier to undo. A quick check with some metal polish on a key-ring confirmed that - yes; there really is a bright nickel machine underneath all that dirt and tarnish... 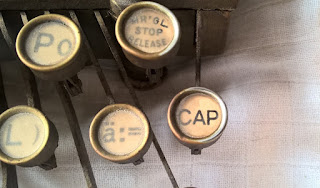 So now a Hammond Multiplex 'new on the shelf' - or rather 'old on the shelf' - a project that will start with a slow, step-by-step disassembly and (slower yet) thorough cleaning of all parts.
Many months of tinkering pleasure ahead :-)
Posted by RobertG at 11:28 AM 2 comments: