An unexpected bycatch when going to pick up a typewriter. (After the debacle of the ludicrous buffering of the Synela, pick-up whenever possible.) The pick-up turned out to be a vintage / thrift-store / antique shop. The youngest had been asking about a rotary-dial phone for a while and just on the off-chance I asked the seller of the typewriter if he had any. He did!

He'd just sold one, but a new shipment had just come in that he thought had a phone. Rummaging about, it was indeed retrieved from one of the boxes - youngest viewed and approved and it was bought for a not unreasonable sum. 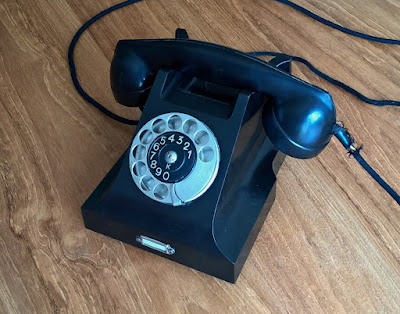 From a quick search on the hive-mind that is the internet; this is known as an Ericsson model 1931, type 1949 Dutch telephone. This model was introduced by Ericsson in 1931, with integrated metal dial. The Ericsson type-number is DBH 1001. The metal number-holder on the front is apparently typical for Dutch-manufactured phones, from 1936 or so. After the war, many of these phones were overhauled to comply with new standards (wiring, safety) and then also given a newer, later pattern horn. 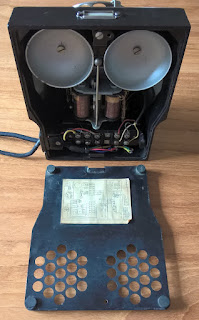 Checking the insides, it indeed has 'modern' wiring with plastic insulation. (The horn wires have been disconnected, rather frayed cable etc.) A label on the bottom states it was assembled in 1954, so this perhaps is one of those overhauled phones - the 1931 housing with a more modern (~'47 pattern) horn and insides.