This picture from a 1941 printing of a Monroe brochure shows the L 160-X calculator's small size - it even came with its own carrying case. 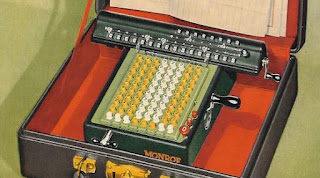 This specimen lost its carrying case, but otherwise has survived very well. A Monroe L 160-X (Executive) mechanical calculator. As the advertising text of the brochure notes; it really is amazingly compact, the main body measuring only 15 by 22 cm. (I.e. tiny compared to calculators of the time.) 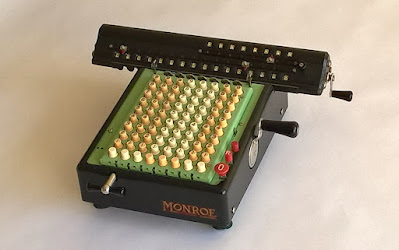 This type was introduced in 1929, basically a half-sized version of their earlier machines. Around 1936 the pale green keyboard was introduced with the extra shadow-mask plate for better visibility of pressed-down keys. Probably around 1939 the handles were given a more modern, straight shape. This specimen still has the crackle-pattern black on green paint on the main body and the old style Monroe logo - by the late 1940s this was changed to a script logo and a plain finish.

As is noted by others, it's very light-running and quiet compared to other calculators, e.g. pinwheel machines. In some company advertising it was actually referred to as the Monroe Noiseless. 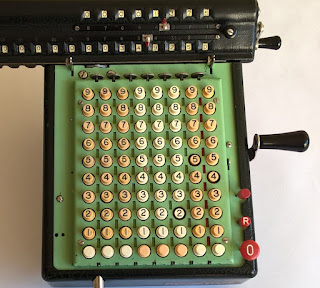 This particular specimen was originally purchased new by a building firm in Munich, where it was used in their office. With the advent of electronic calculators, the machine was put away with others in a storage room - and likely forgotten about. The son of the founder of the firm remembered seeing it being used when he was a child in the 1950s. He was now clearing out the old offices, found it again, and put it up for sale online. And there it was purchased by its second owner (me).

The Typewriterdatabase is also a great resource for calculators!; the serial-number resources of The Database (Nomda) confirmed that this calculator was made in 1946. This matches the start of the firm - who started doing work for the Americans also at that time. Buying an American calculator too - it fits.

It needed cleaning, some minor repairs and only small cosmetic touch-ups - repairs well worthwhile for this very nice and working calculator.

The calculator had evidently been used with care and stored well; a light wipe with a damp cloth was really all that was needed. Even on generally clean machines however, the keys accumulate dirt and 'gunk'. To properly clean that and stabilize any cracks in the plastic, the keytops were taken off. Many keys simply pulled off, the remaining keys were pried off with (curved) pliers resting on a strip of rubber for support to not damage the paint.

The keys can then simply be washed in warm, soapy water. Stubborn 'gunk' is loosened with a wooden toothpick. Where the deforming plastic was cracking, some cyanoacrylate was run into the cracks to hopefully prevent complete disintegration of a key. Then the clean, stabilised keys are ready to be pressed back onto their stems - the lettering on the red control-keys was refreshed with off-white paint. 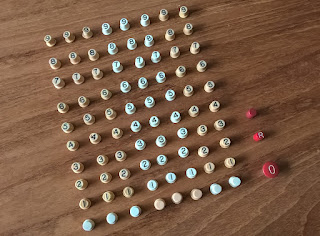 Before re-fitting the keys however, the machine was taken apart a bit further. The disassembly of a Monroe is fairly widely documented on the web - there are even some original maintenance manuals on the Archive. The keyboard is a sub-assembly that can be lifted out, but in this case only the top-plate was taken off for cleaning it inside (dust and debris does collect over the decades). A bit of a bother to put back perhaps, as all 80 stems need to pass through the slots in the top-plate in one go :) 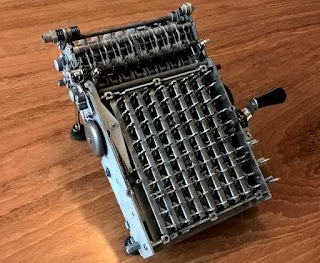 Underneath the machine, the long bars can be seen that are tilted/deflected by pressing down the key-stems. Their deflection then slides the stepped drums into their positions for the number that is pressed. Two bars per column, as it uses base-5 encoding so two 'digits' per column. The large disk-drum at the back of the machine (it's standing on its front) is the 10-s carry - so there is only 10-carry in the part of the register that is above the main-body. In use that generally isn't an issue, but something to be aware of. 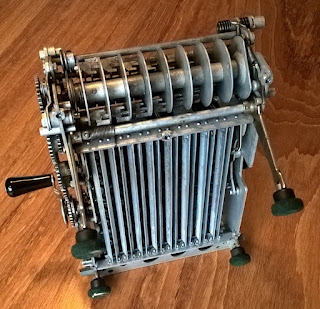 The serial number on these machines is stamped on the inside of a frame side-plate. This can only be seen when the machine is taken apart, but it should also be scratched (by hand) on the inside of the carriage on the left-hand side. The stamping confirms it is an L160X, with serial number 374910 - a 1946 machine.

One broken-off pin in the carriage-mechanism meant the result-register would not clear - a new pin was shaped from a nail and was pressed into place. (It's not hardened steel, but for its future light use it should be fine...) 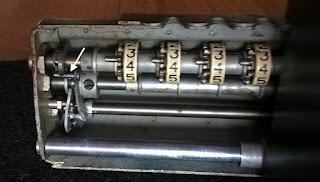 Another small defect was that the automatic keyboard clearing didn't work in addition, only when subtracting. This turned out to be caused by a stuck sliding cam on the first driving gear. The gear that is driven by the crank has a sliding/rotating cam that depending on the turning direction (addition or subtraction) must slide to the correct timing position. This cam was stuck solid in the subtract-position.

All the gears can be easily taken off by removing the spring-clips of their axles. Very helpfully, all gears are clearly marked for their correct meshing position to maintain correct timing of the mechanism. As is often the case with old mechanical devices, the problem was solved by a good cleaning to remove old grease. Everything then moved freely again and the keyboard cleared as it should for both 'modes'.
The lacquer finish was largely fine with only some minor scuffs and scratches. Using markers of varying shades of green to black and some experimenting, these scuffs were made much less obvious. 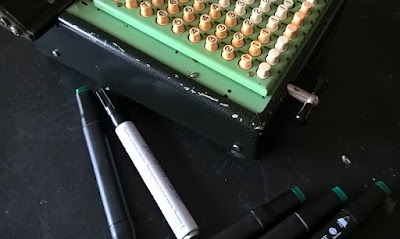 The paint-damage also confirmed that this machine originally did have a carrying case. The calculator is held with 'forks' that clamp around two feet and then it's locked with a clamp in this hole in the base-plate - when placing it back into the case it would be easy to scratch the paint around the hole (likely impossible not to do so).

With touched-up paintwork, polished nickel and all-cleaned; a very nice, compact, quiet and quite capable calculator!
Posted by RobertG at 11:50 PM